By Corazon Miller For Mailonline and Reuters

It is looking increasingly likely that Japan will be dumping contaminated Fukushima water into the ocean.

A panel of experts that have been advising on the best disposal method for radioactive water from the destroyed nuclear plant made the recommendation today – one the Japanese government is likely to accept.

The panel, under the industry ministry, came to the conclusion which is likely to alarm neighbouring countries, after narrowing it down to two choices: releasing contaminated water into the Pacific Ocean or letting it evaporate.

Workers wearing protective suits and masks are seen at Tokyo Electric Power Co.’s (Tepco) Fukushima Dai-ichi nuclear power plant that was wreaked by an earthquake and tsunami in 2011

Based on past practice it is likely the government will accept the recommendation for the former option.

The build-up of contaminated water at Fukushima has been a sticking point in the clean-up of the area that was devastated by a 2011 tsunami that followed a large 9.1 magnitude off the north-east coast of Tokyo.

Concerns over radiation contamination, in particular in the water are big concerns, especially as the Olympics are due to be held in Tokyo this summer with some events less than 35 miles from the wrecked plant.

Neighbouring South Korea has retained a ban on imports of seafood from Japan’s Fukushima region imposed after the nuclear disaster and summoned a senior Japanese embassy official last year to explain how the Fukushima water would be dealt with.

Its athletes are planning to bring their own radiation detectors and food to the Games. 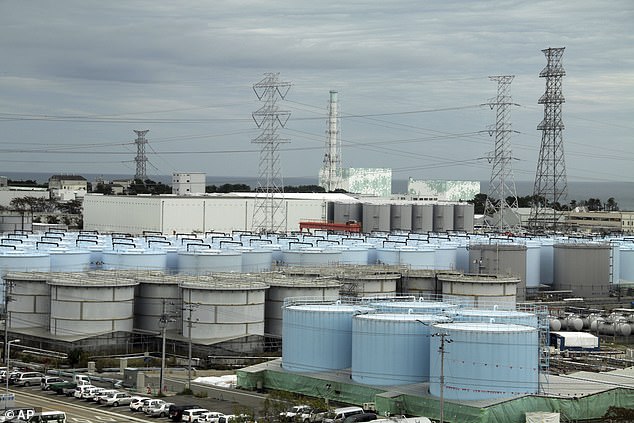 In 2018, Tokyo Electric apologised after admitting its filtration systems had not removed all dangerous material from the water – and the site is running out of room for storage tanks.

But it plans to remove all radioactive particles from the water except tritium, an isotope of hydrogen that is hard to separate and is considered to be relatively harmless.

‘Compared to evaporation, ocean release can be done more securely,’ the committee said, pointing to common practice around the world where normally operating nuclear stations release water that contains tritium into the sea.

The recommendation needs to be confirmed by the head of the panel, Nagoya University Professor Emeritus Ichiro Yamamoto, and submitted to the government at a later date, which has not been set.

Tokyo Electric, or Tepco, has collected nearly 1.2 million tonnes of contaminated water from the cooling pipes used to keep fuel cores from melting since the plant was crippled by an earthquake and tsunami in 2011. The water is stored in huge tanks that crowd the site.

The utility says it will run out of room to store the water by 2022.