Japanese glass and timber-framed house in Cambridge is for sale for £1.29million

With its wooden structure, sliding glazed doors and windows spanning an entire wall, this single-storey property looks like it could be tucked away in the foothills of Japanese mountain range.

But rather than being located in the land of the rising sun, it is far closer to home – in the university city of Cambridge.

It is in a secluded location, found along a 200 metre footpath leading off one of the city’s most sought-after roads and surrounded by greenery. 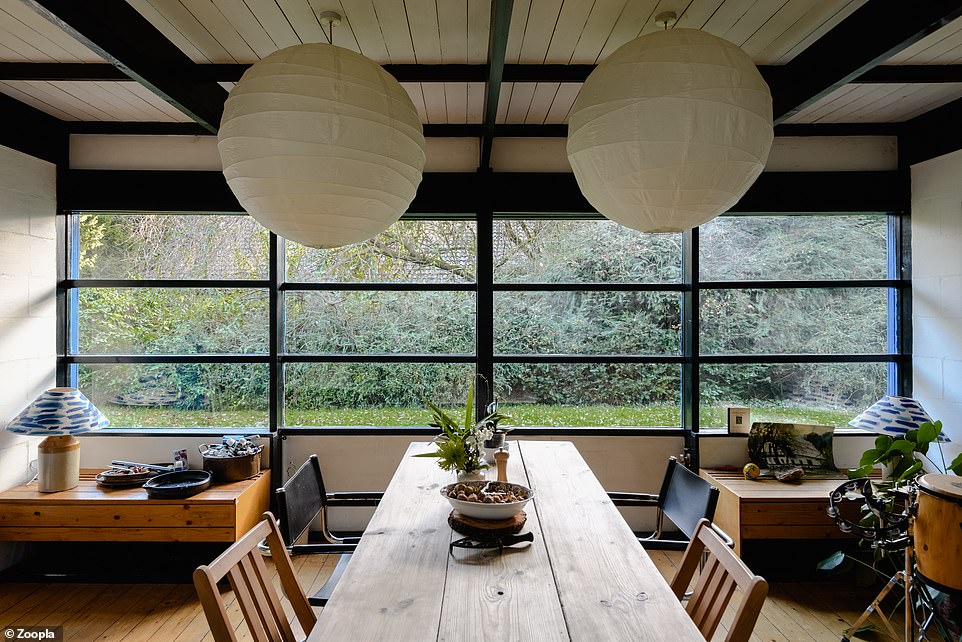 The perfect setting for eating sushi? The dining room is at the heart of the house and overlooks the private garden

It was designed by the architect Syd Furness, a professor at Cambridge University who moved into the property with his family in 1979.

He found the quiet and private plot off Hills Avenue and constructed the simple timber-framed property. Glass is used extensively throughout, both on the roof and external walls.

The result is a bright interior that frames its green surroundings, with attractive views to the mature private garden.

The four-bedroom house is on the market via estate agents The Modern House, with a price tag of £1,295,000.

Buying agent Henry Pryor said: ‘Having been to school and had my first job in Cambridge, I have no doubt that the current home will appeal to an academic who loves what already exists on the plot – but there will be hundreds of people wanting to know if it could be bulldozed and a traditional home built on the site.

‘Given the exorbitant cost of housing in the city and the levels of homelessness, it borders on the offensive that land could be so underused but the fact that it can be is what makes a location like Cambridge so desirable to so many.’ 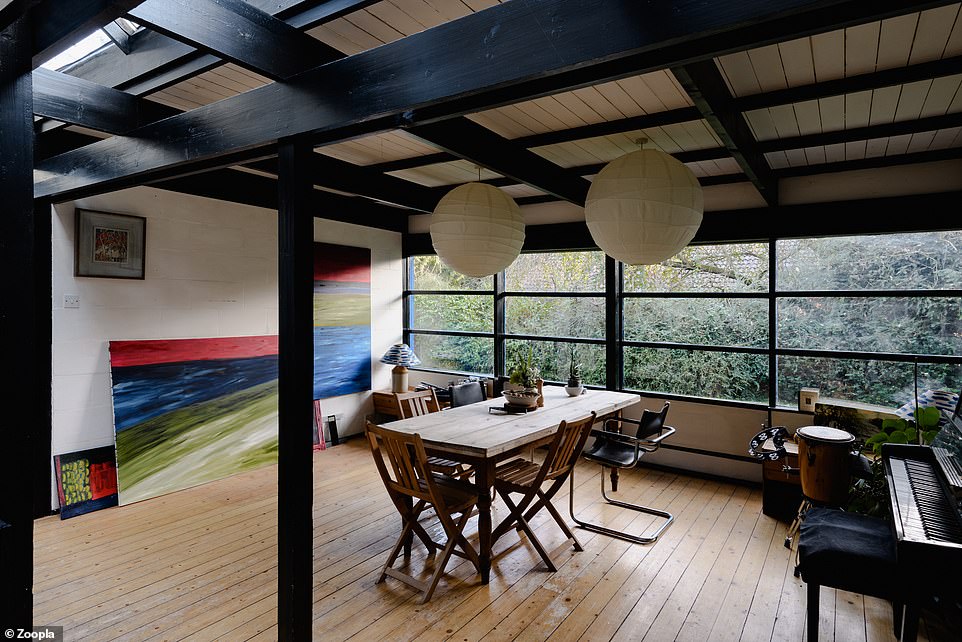 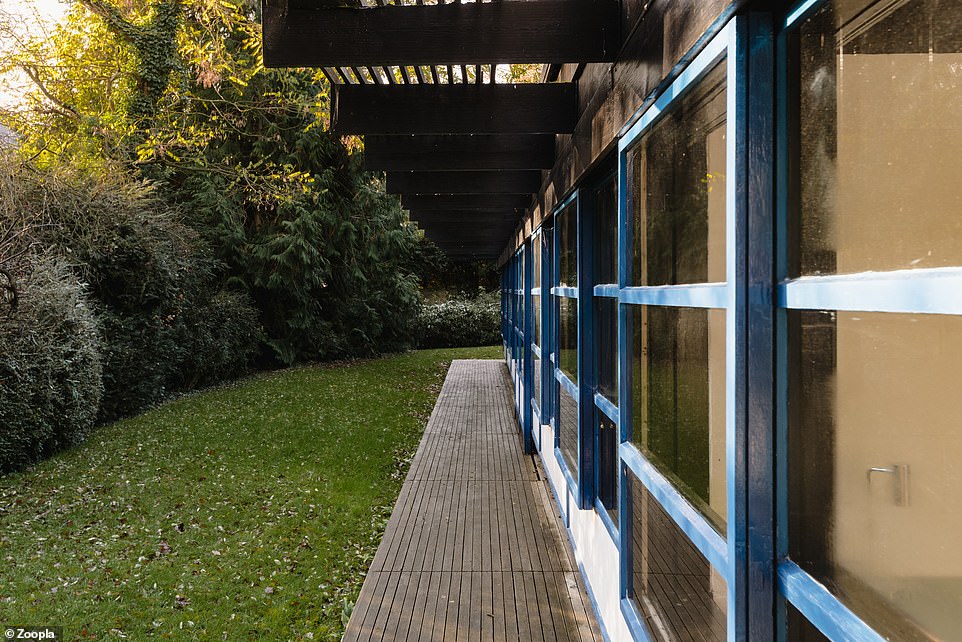 The unusual property has glass spanning across the length of this wall, which is framed with timber painted blue 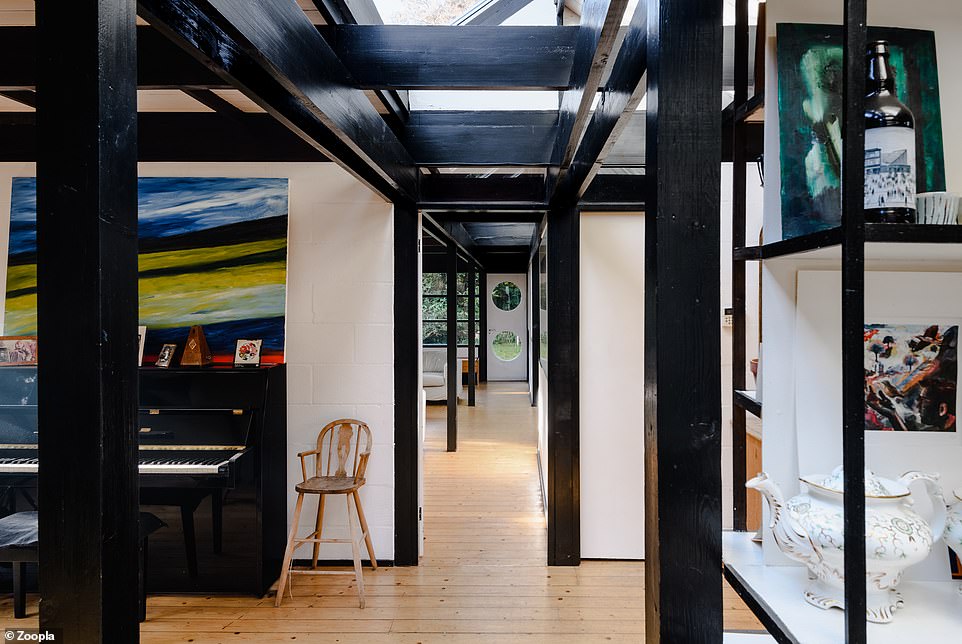 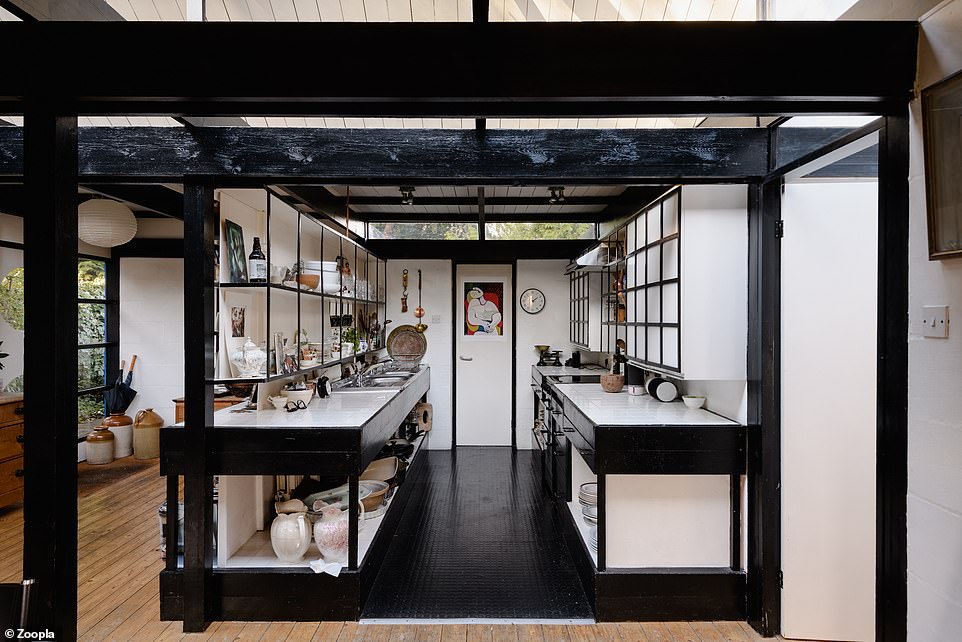 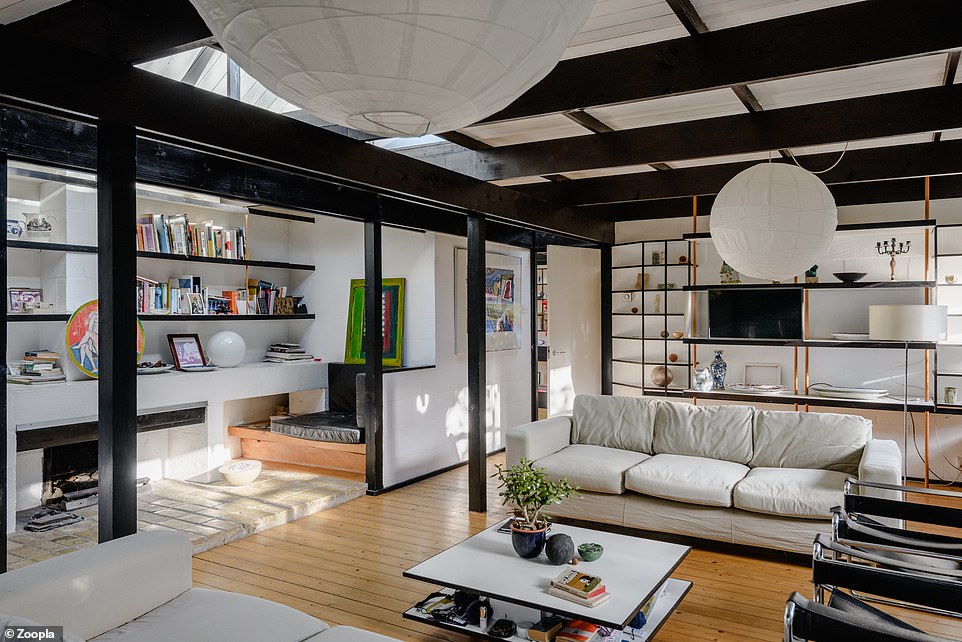 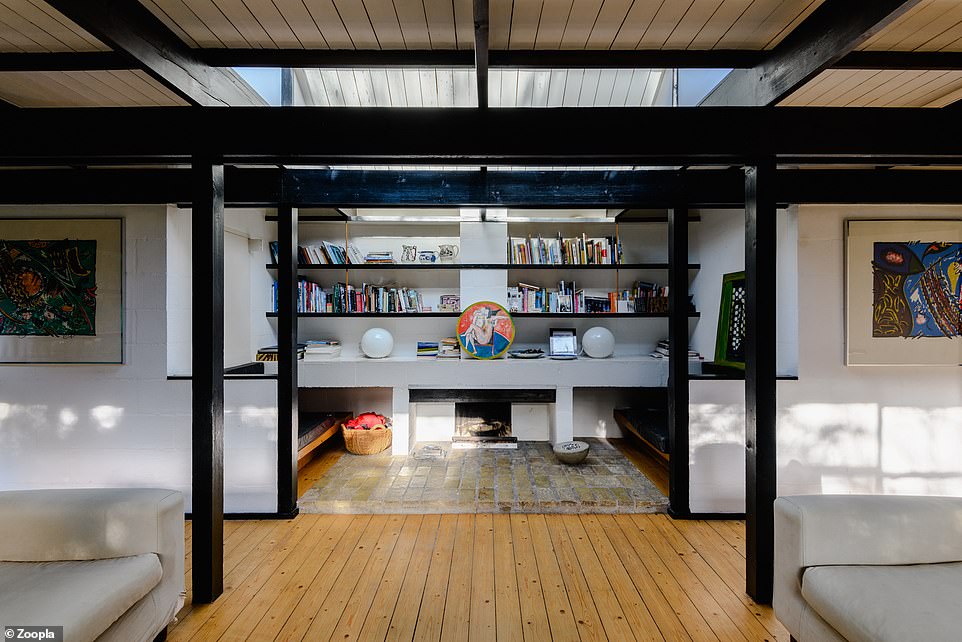 Glass is used extensively throughout, both on the roof and external walls – including in the living room

He added: ‘At £770 per square feet, we’re talking London prices but this will come as no surprise to property people in Cambridge.

‘The location is first class and the lack of vehicular access won’t put enough people off in a city where most people get around by bike.

‘It may be a challenge for home delivery companies, and of course a pain for the emergency services, but I expect that they will queue up to buy this home.

‘The property may even achieve a premium price with international competition for housing for science and biotech businesses in and around Cambridge driving demand for even the quirkiest of properties.’ 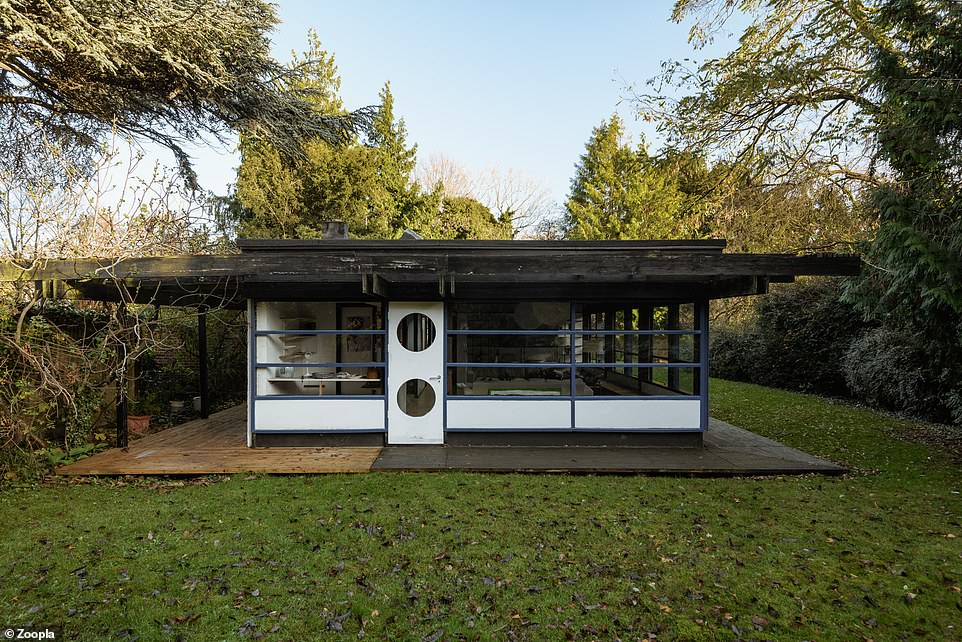 Working from home? Leading from the living room, there is a study that looks out across the extensive plot 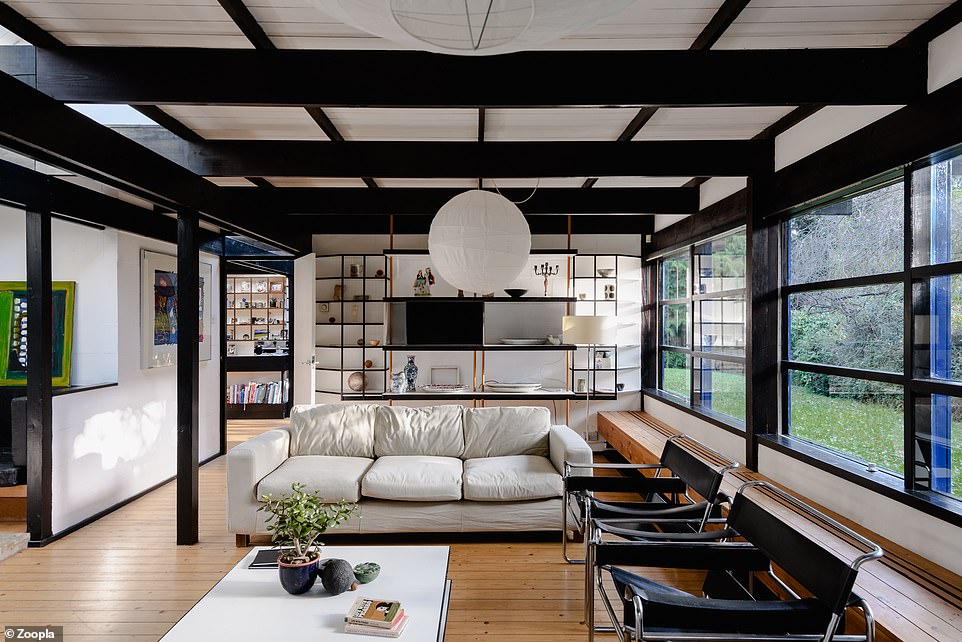 Inside, the house is designed around a central open-plan dining room and kitchen, with the bedrooms at one end of the house and the living areas at the other.

The main entrance is via an enclosed porchway, leading to a generous hallway.

At the heart of the house is a dining room with sliding glazed doors spanning the length of one wall. It means the entire space can be opened out onto the garden during the summer.

The living room is organised around a seating areas with an open fire place, and planning permission has been previously granted to extend the house.

Outside, there is mature hedging that encloses the garden and a decked terrace. And at the foot of the pathway to the house is a paved area that can be used as a designated off-street parking space. 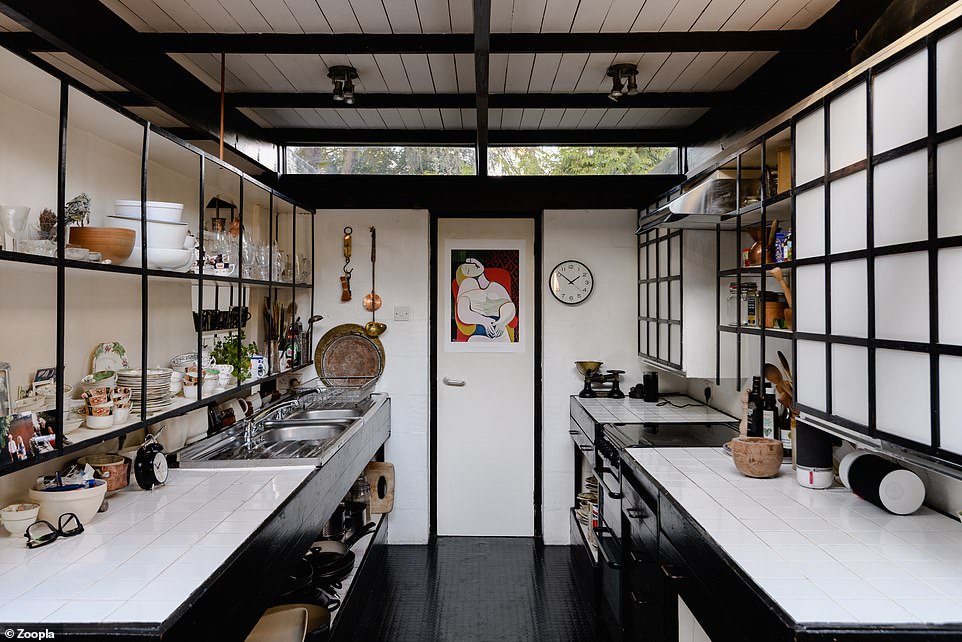 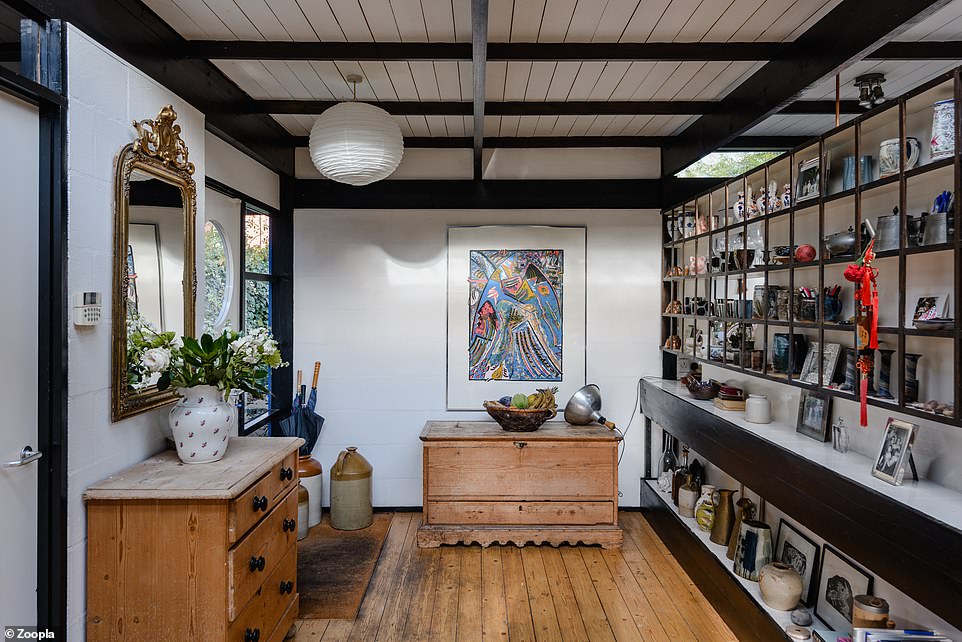 The main entrance is via an enclosed porchway, and leads to this generous hallway with a large shelving unit 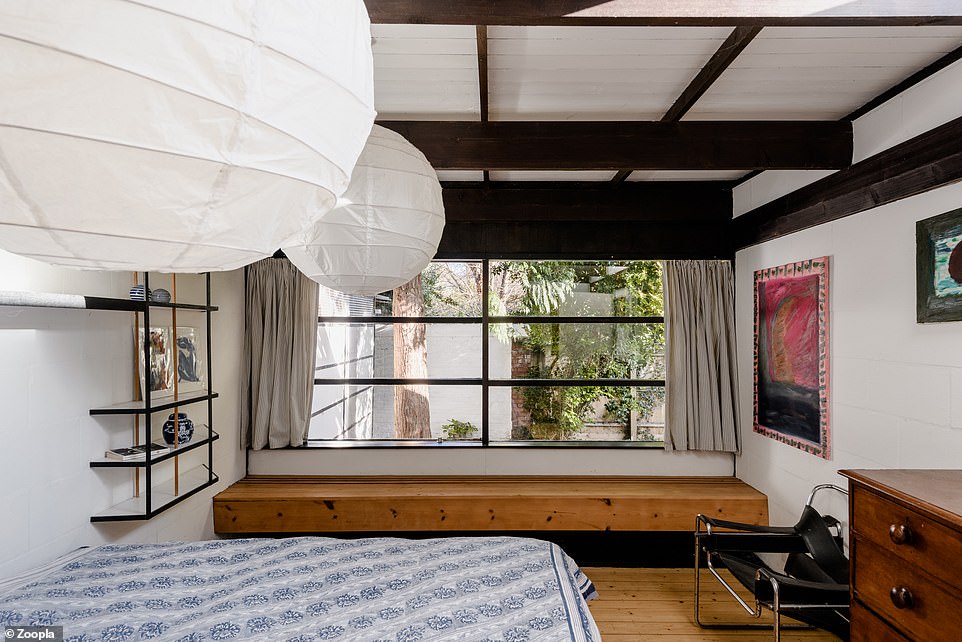 Hills Avenue can be found to the South East of Cambridge city centre, with easy access to schools – including Perse, Hills Road Sixth Form and Homerton College.

Cambridge is world-renowned for its university and the quality of its historic architecture. And today, it is increasingly being recognised as an international business hub due to its growing technology and science industries.

The average price of a house in the city of Cambridge is £471,259, according to property website Zoopla. It is 50 per cent higher than the £313,739 average value of a property in Britain.

There is good access to public transport, with a direct train service running to London St Pancras in about 50 minutes.

Cambridge train station is roughly 20 minutes on foot from Hills Avenue, with bus services also operating within minutes of the house. 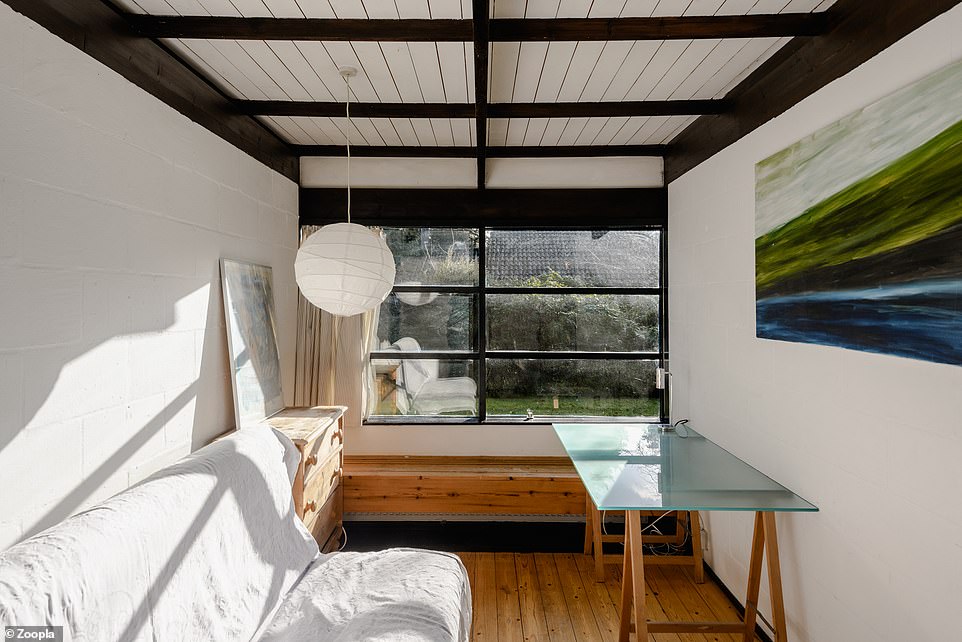 One of the bedrooms is currently used as a guest room, with a sofabed and table

Tim Vooght, of property website Zoopla, said: ‘Architecturally striking homes will always drive interest because of their unique qualities, but this modern home will blow others out of the water.

‘Designed in 1979 by renowned architect Syd Furness in a secluded location close to one of Cambridge’s most sought-after streets, this house looks like it belongs in a Japanese forest.

‘With a black, white and blue colour palette, this home is perfect for someone who doesn’t just want to just hang a Mondrian on the wall, but actually wants to live in something bearing a strong resemblance.’ 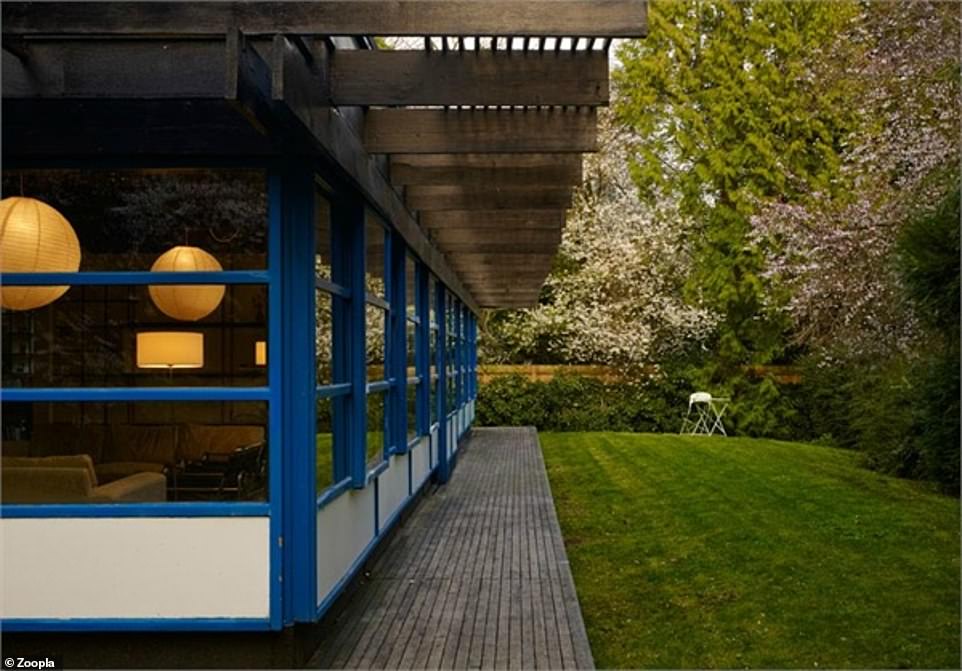 Outside, there is mature hedging that encloses the large garden and a decked terrace 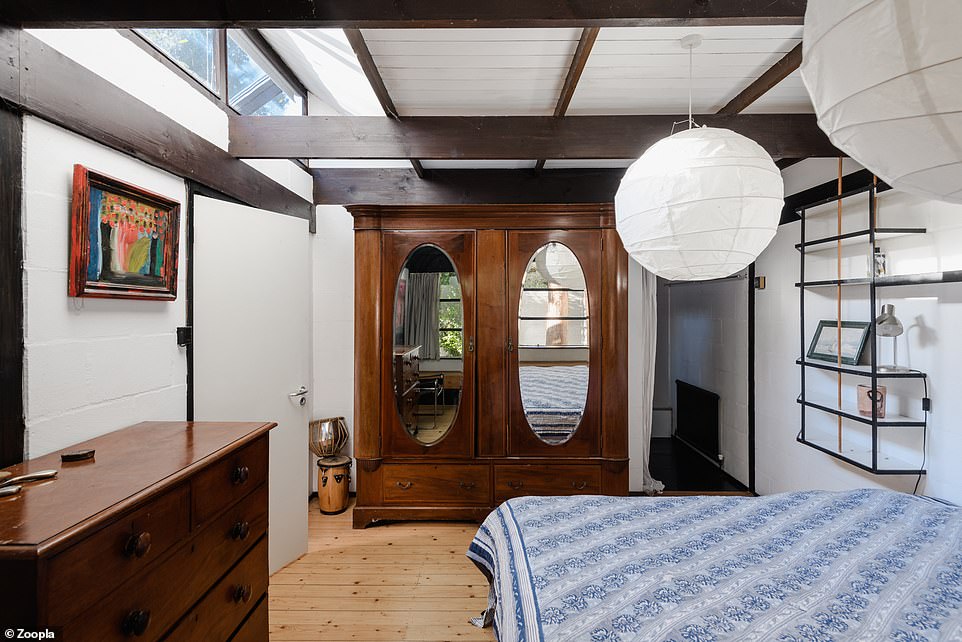 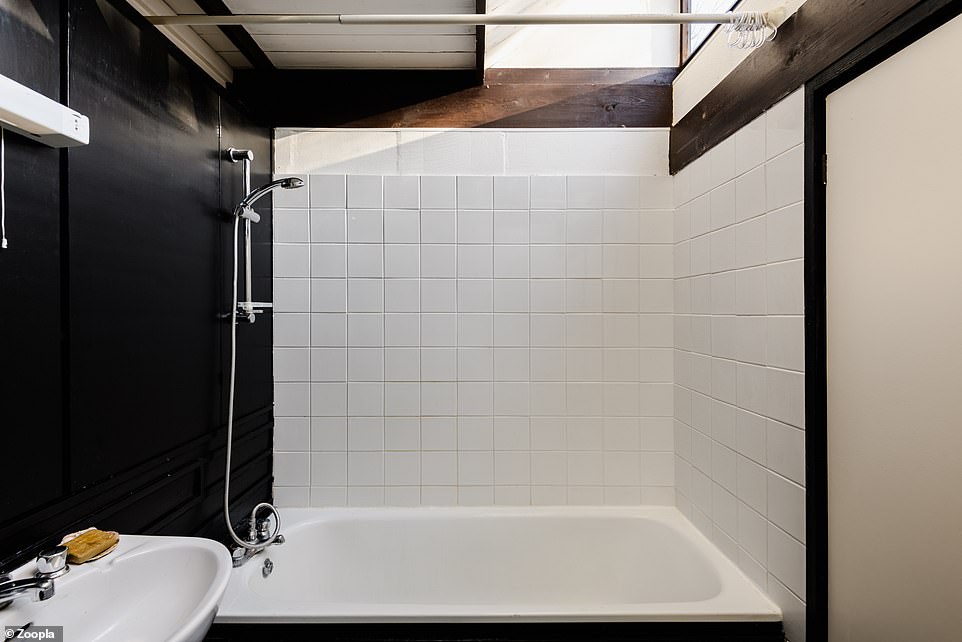 Making a splash? The black and white theme of the property continues in the bathroom