Japanese hospital apologizes after stillborn baby is flushed down the toilet

A Japanese hospital has apologised after a cleaner flushed a stillborn baby down the toilet by mistake, leaving the mother traumatised by the sound of the chain being pulled.

The mother had given birth at 14-weeks to the stillborn baby while in the bathroom of Saitama Red Cross Hospital in Saitama, north-central Japan.

Local media reported that a pregnant 36-year-old woman was hospitalised at the facility and the following day she was in the delivery room when she asked to leave to go to the toilet to urinate.

The apology was issued after the incident at Saitama Red Cross Hospital (pictured), located in the city of Saitama in Japan’s north-central Kanto region on the main island of Honshu

Her 39-year-old husband says she then delivered her 14-week-old stillborn as she was sitting on the toilet.

Reports state she then moved to a different room on the staff’s instructions and a member of the hospital’s cleaning staff then flushed the toilet she had used.

Doctors could reportedly be heard screaming after the janitor flushed the toilet but it is unclear why nobody had removed the baby from the toilet beforehand.

The baby’s heart had reportedly stopped beating four days before it was delivered but the couple are said to have hoped to name the baby and keep a picture of it along with a handprint. 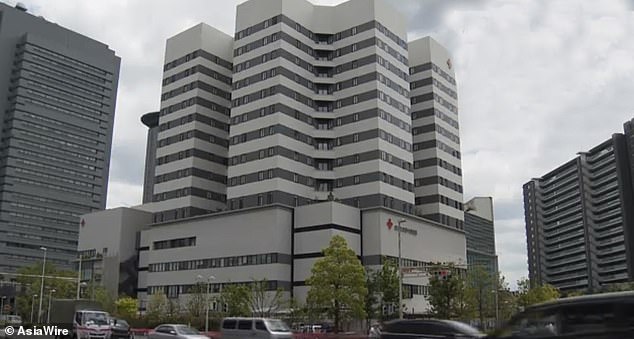 The mother, 36, and father, 39, had been hoping to name their stillborn baby, take a picture and say a proper goodbye

The husband says the hospital have now written to the family to apologise and he says they have taken measures to stop similar incidents occurring in the future.

He added: ‘We offer prayers to an empty urn every day. My wife is traumatised by the sound of a flushing toilet. I don’t want a similar incident to occur again.’

It is unclear if the cleaner has been fired or if the couple are suing the hospital. It is not known who cut the baby’s umbilical cord.