Japanese pilot caught drunk at Heathrow is jailed for 10 months

Katsutoshi Jitsukawa, 42, pictured, was arrested at the airport after failing a breath test just 50 minutes before he was due to fly a Japan Airlines flight to Tokyo

This is the moment a Japanese Airlines pilot is arrested after being found nine times over the alcohol limit following a 24-hour drinking binge.

Drunk first officer Katsutoshi Jitsukawa, 42, is pictured being arrested just 50 minutes before the Japan Airlines (JAL) flight to Tokyo was due to take off with him in the cockpit.

He was due to fly a Boeing 777 aircraft which holds up to 244 passengers and shortly after being challenged over his behaviour he was seen gargling mouthwash in the plane toilet.

Judge Phillip Matthews described the co-pilot as ‘very intoxicated’ ahead of the October 28 flight, as he sentenced him to 10 months’ imprisonment at Isleworth Crown Court on Thursday.

‘You are an experienced pilot but you had clearly been drinking for a long period up to a time shortly before you were due to go into that plane,’ the judge said.

‘Most important is the safety of all persons on board that very long-haul flight, potentially 12 hours or more. Their safety was put at risk by your inebriation and drunkenness.

‘The prospect of you taking over control of that aircraft is too appalling to contemplate. The potential consequences for those on board was catastrophic.’ 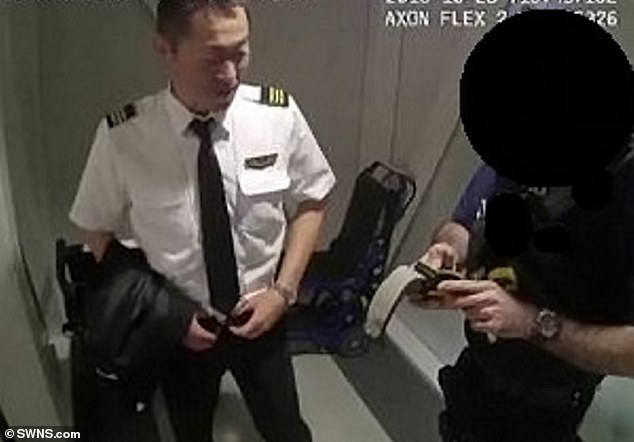 After initially being challenged over his behaviour, Jitsukawa was later found gargling mouthwash in a plane toilet. He is pictured being arrested

Douglas Adams, prosecuting, said: ‘This concerns an incident on the 28 October this year. The defendant was the co-pilot or first officer for Japan Airlines to Tokyo scheduled to leave Heathrow at 7pm that day.

‘Together with the rest of the crew he went through security checks.

‘It was thought by some of the security staff doing the checks that this defendant was under the influence of alcohol.

‘They spoke to a security manager and he decided he would go and speak with the defendant and he approached him. 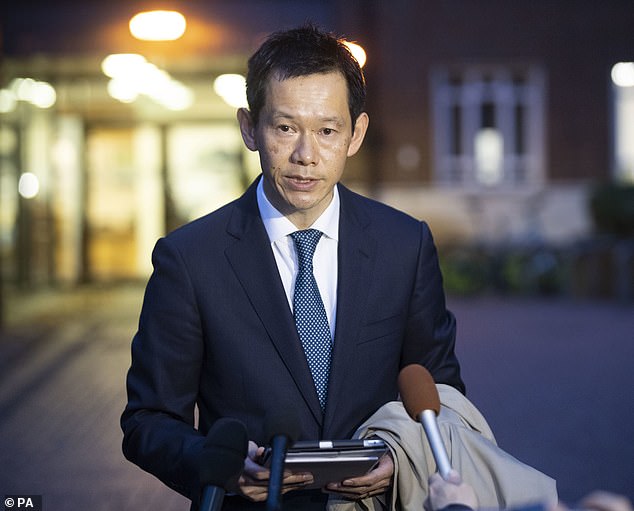 ‘He and his flight crew members were waiting to go on the coach which would take them across the tarmac.

‘He made an initial approach toward Mr Jitsukawa – but nothing was said at that stage.

‘The security manager returned to security crew just to make sure he understood what he thought had happened.

‘They confirmed their impression was that the defendant was drunk and that he had smelt of alcohol.

‘He then went back to speak to Mr Jitsukawa but by this stage he and the rest of the crew had journeyed across the tarmac onto the air bridge.

‘By this stage he had gone onto the air bridge and onto the plane itself.

‘Stewardess were waiting to receive passengers but they had not yet boarded the flight.

‘He asked Mr Jitsukawa to come out off the plane so that he could speak to him.

‘He could also smell alcohol on his breath and so he had the impression that he was under the influence of alcohol.

‘Mr Jitsukawa told him he had had whisky but was breathalysed and cleared.

‘The defendant said that he wanted his blazer from the flight deck.

‘He agreed and then he felt perhaps he shouldn’t have let him and he went back on the plane to find the defendant.

‘He found the defendant in the toilet rinsing and gargling his mouth with mouthwash.’

Jitsukawa, who was clean-shaven and in a grey tracksuit as he appeared on a videolink from Wandsworth prison, kept his eyes closed through much of the hearing.

It was said on his behalf that he was struggling with life as a pilot and suffered with insomnia.

He is the sole carer of his three young children and was unhappy as he was spending a significant amount of time away from them.

The pilot has since been dismissed from Japan Airlines, the court heard. 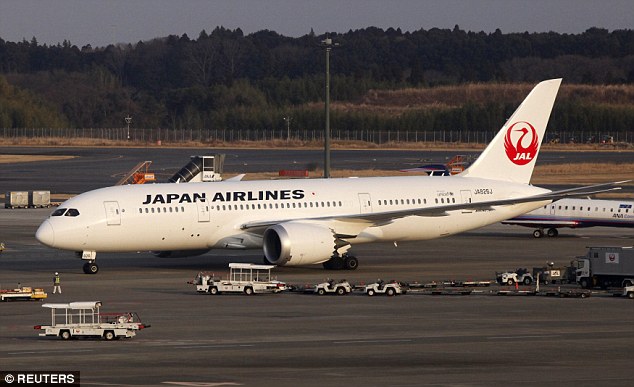 Bill Emlyn Jones, defending, said: ‘My client asks me to convey apologies to customers of the airline he worked for, his employers, his colleagues, his family and this court for the shame he brought on them.

‘Some 30 years ago as a little boy growing in Japan he used to dream of growing up and flying a plane.

‘Through his hard work, dedication and application he turned that little boys dream into a reality and became a pilot for Japan Airlines.

‘Now he is 42-years-old still in the prime of his life and all that he worked for lies in ruins. He fully accepts he is the author of his own downfall.

What is the alcohol limit for pilots?

Pilots are subject to much stricter alcohol restrictions than drivers.

The restriction on alcohol in the bloodstream is 20mg per 100ml for pilots and 80mg for drivers.

‘He was spending long periods of time away from his family and young children, working irregular hours he became unhappy he suffered with sleeplessness with his sleeping patterns.

‘He turned to alcohol for a means of self medicating against unhappiness and insomnia.

‘He couldn’t actually remember when he stopped drinking. He drank the night before from the evening and into the night. Your honour may come to the view he was drinking in the day itself and on the reading that must be right.’

The judge said Jitsukawa would serve half of the sentence before being released on license.

He added that if it were possible to repatriate the former pilot to Japan the court would welcome it.

Outside court, JAL deputy general manager in London Yasuhiro Kikuchi denied colleagues acted improperly, and added: ‘As an organisation we are going to work together to prevent this happening again.’

Japanese media reported that police were alerted by the driver of a crew bus who smelled alcohol on the pilot.

Tests revealed he had 189mg of alcohol per 100ml of blood in his system, almost nine times the 20mg limit for a pilot.

The drink-drive limit in England, Wales and Northern Ireland is 80mg.

JAL issued an apology and pledged to ‘implement immediate actions to prevent any future occurrence’, adding that ‘safety remains our utmost priority’.

Airline executives told reporters that Jitsukawa cleared an in-house breath test before arousing the suspicions of the bus driver who was taking him to the plane from Heathrow Airport.

A second breath test before takeoff showed that he had consumed ‘excessive alcohol’, the co-pilot was arrested by British police and required to undergo a blood test which confirmed those results, the company said in a press release.

The plane departed London for Tokyo’s Haneda airport after a delay of one hour and nine minutes, forcing the airline to operate the flight with two pilots rather than the customary three.

Long haul flights, particularly those longer than 12 hours, are normally piloted by two captains and a co-pilot so they can rotate breaks.

‘The company sincerely apologises to the passengers and to all affected by the employee’s actions,’ JAL said in the press release.