Japanese photographer Ryosuke Kosuge, better known as RK, started out in 2013 by taking photos on his iPhone.

Eight years later, he’s moved on to more complex kit, and he’s taking Instagram by storm, with more than 607,00 followers and counting.

His portfolio of striking images showcase how the man-made and natural worlds coexist.

In addition to taking photographs in his home city of Tokyo, he travels around the world snapping subjects and scenery as far and wide as Italy, America and the UK.

‘Awe inspiring’, ‘insane’ and ‘spectacular’ are just a few of the comments RK’s followers regularly leave on his Instagram posts.

Here is MailOnline Travel’s pick of some of his most mesmerising shots.

This rare heart-shaped body of water is Lake Toyoni in Hokkaido, Japan. Explaining how he felt when he took this picture, RK said: ‘The sky was a clear blue over our hearts. Everyone felt a sensation of natural happiness’ 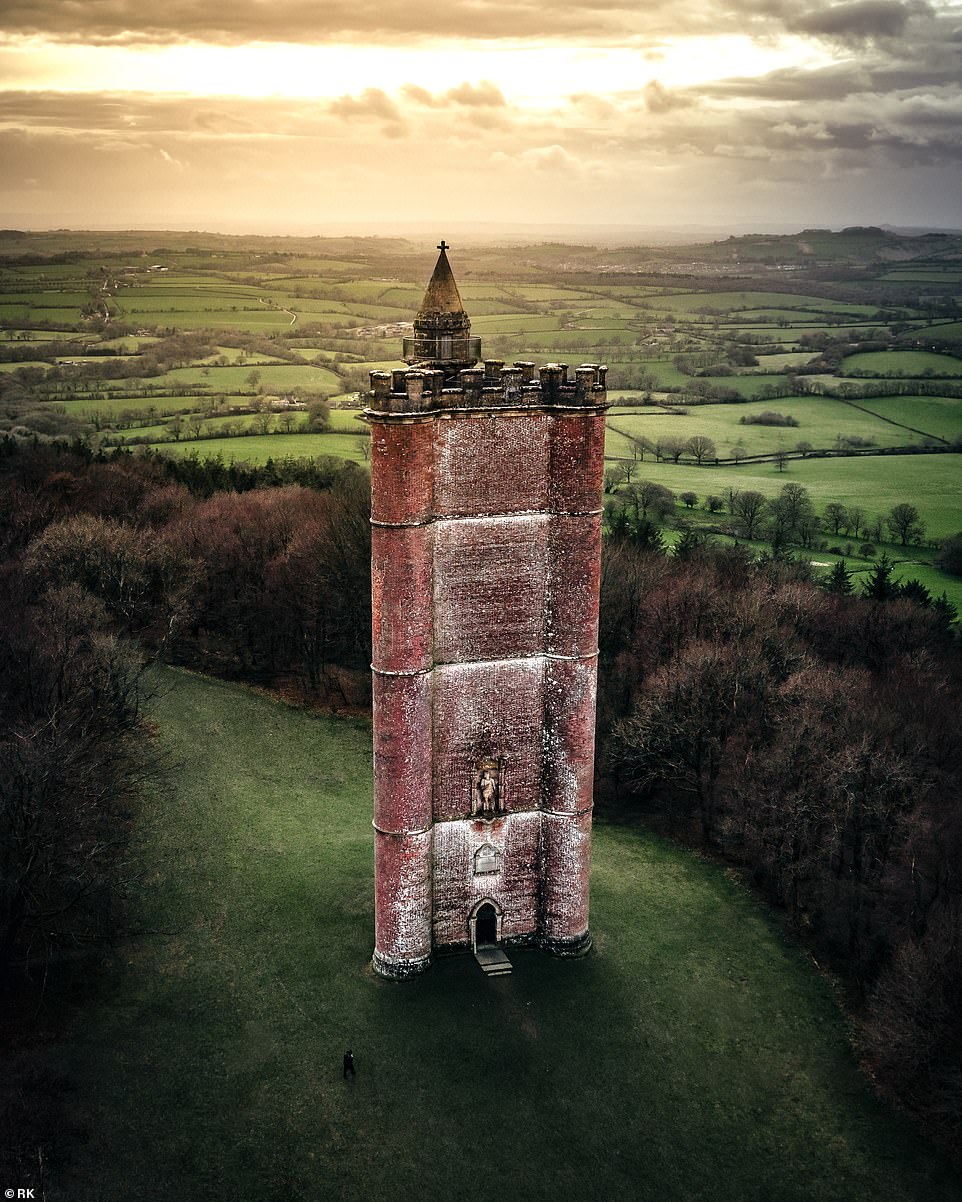 This mesmerising picture is of King Alfred’s Tower, a folly in Wiltshire, England. RK said: ‘The wall of this chapel is reaching to the sky. It might be connect[ed] to heaven’ 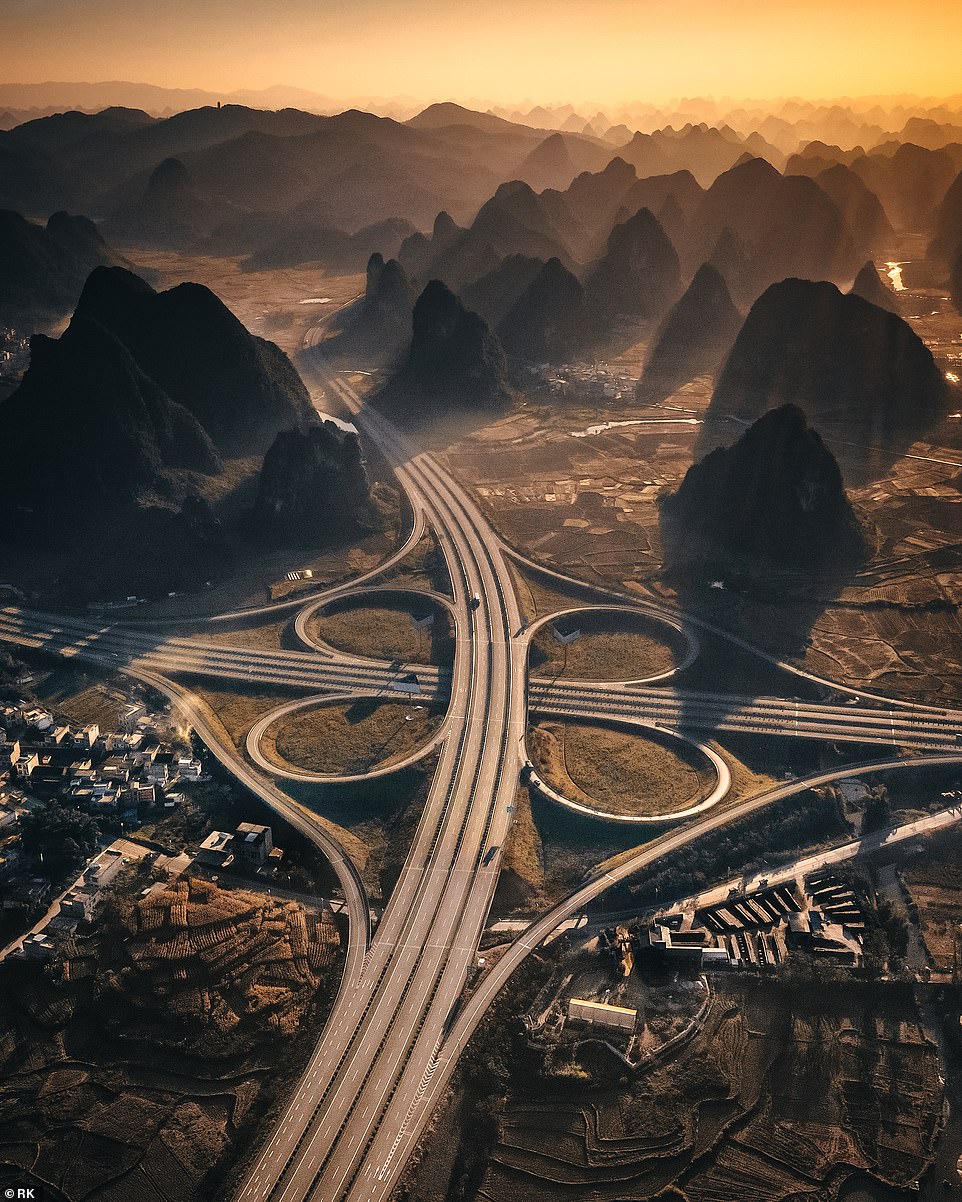 RK described this elevated road junction in Guangxi in southern China as ‘one of the most beautiful viaducts in the world’. Describing the circumstances in which he took this photograph, he said: ‘The rim of the sun was blazing up over a sharp horizon’ 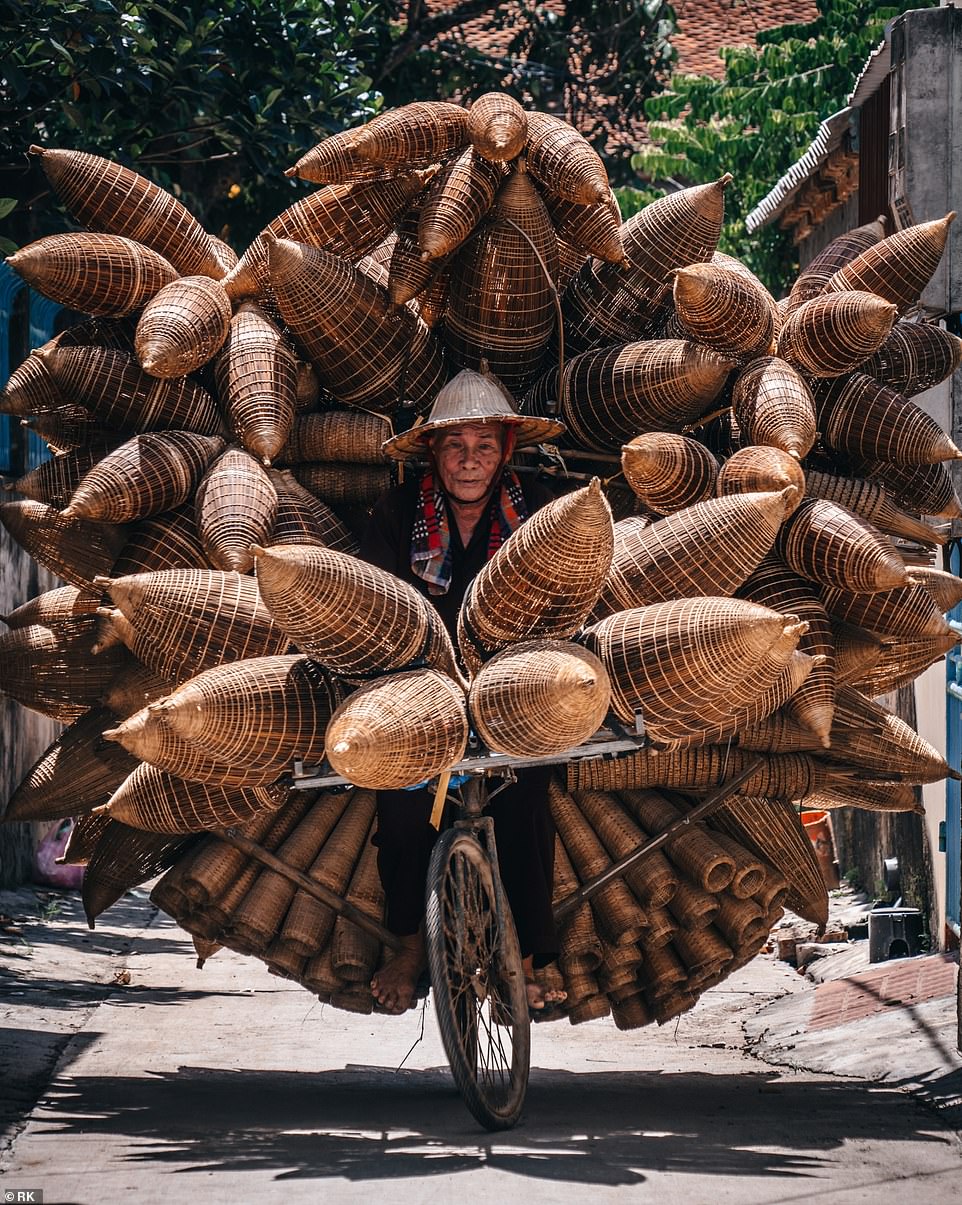 This image, praised by RK’s followers for its symmetry, was taken in Vietnam. The objects balancing on the bike are hand-crafted bamboo fish traps. On Instagram, RK revealed that the art of making these traps is dying out in many villages 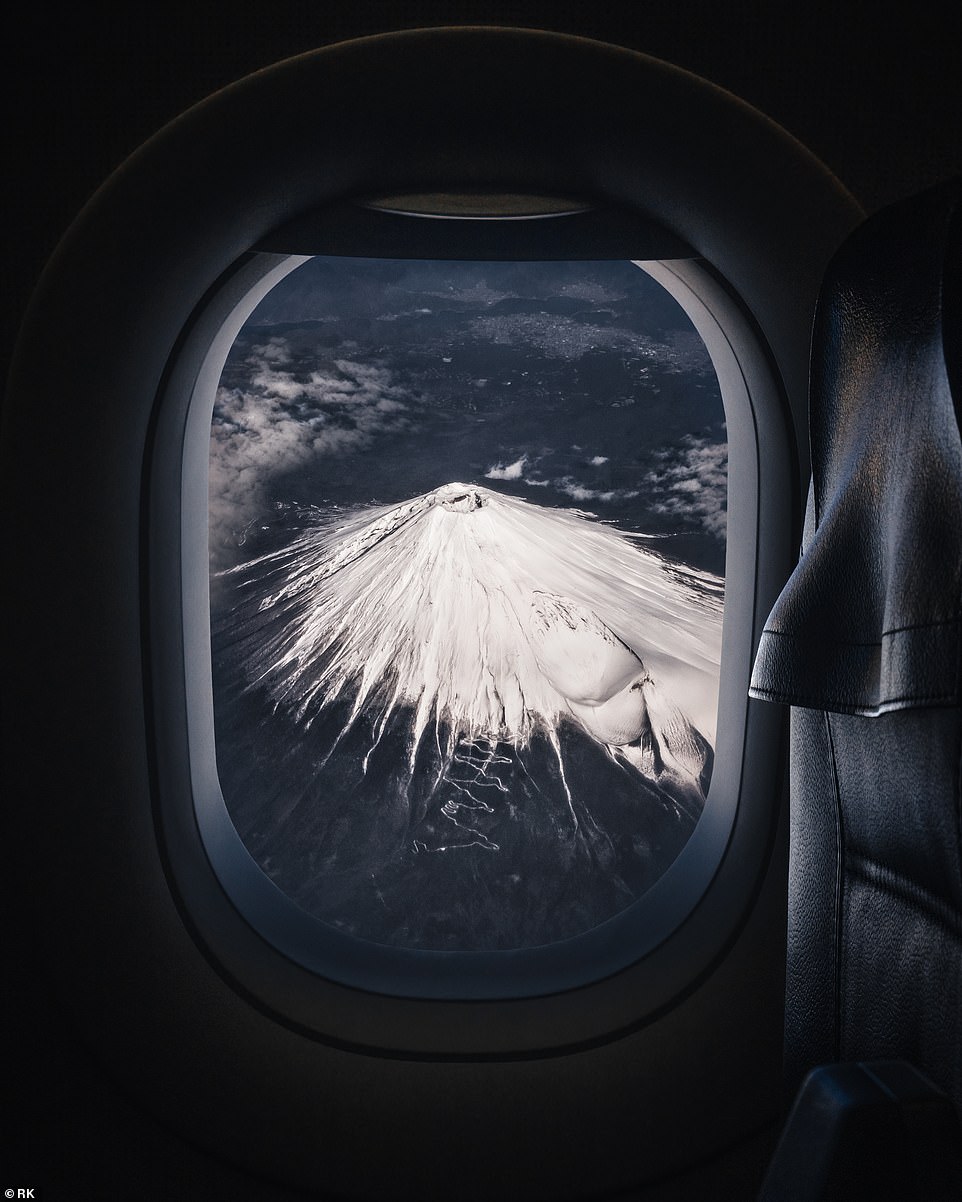 This stunning image of Mount Fuji was taken out of a plane window using a Sony Alpha camera. RK wrote on Instagram when he posted this shot: ‘Never stop exploring this great world’ 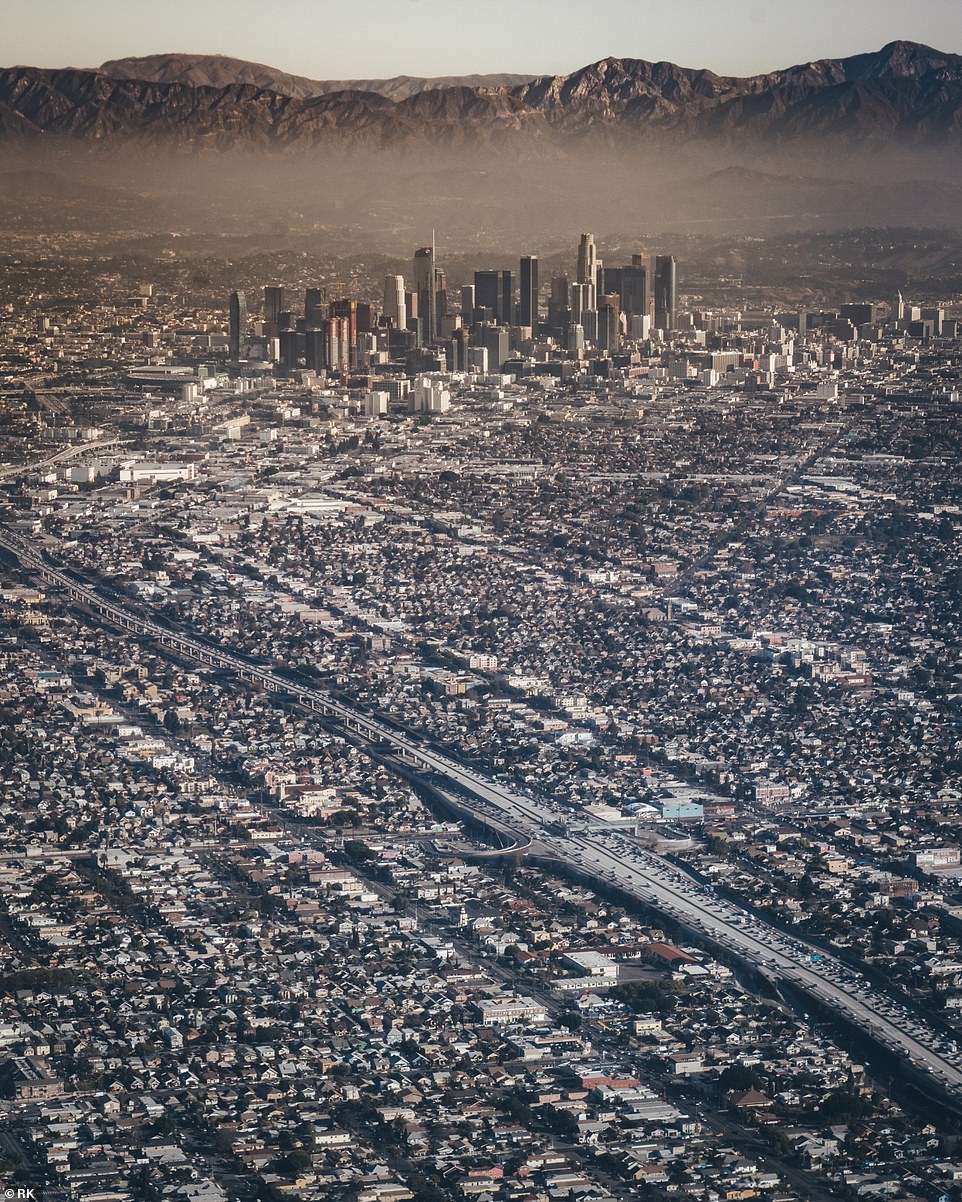 RK uses the hashtags #depthobsessed and #moodygrams to describe this photograph of Los Angeles on Instagram. One follower commented: ‘Love the tones there’ 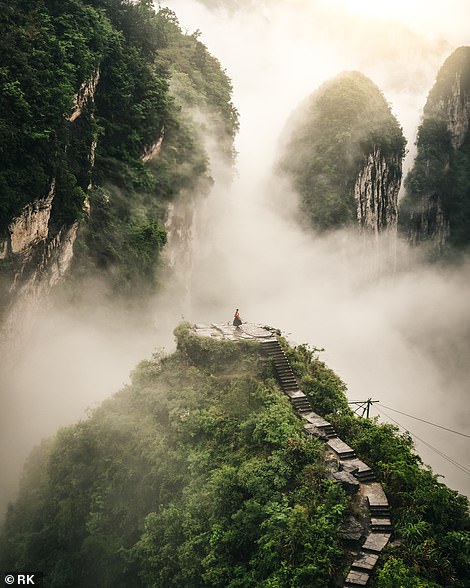 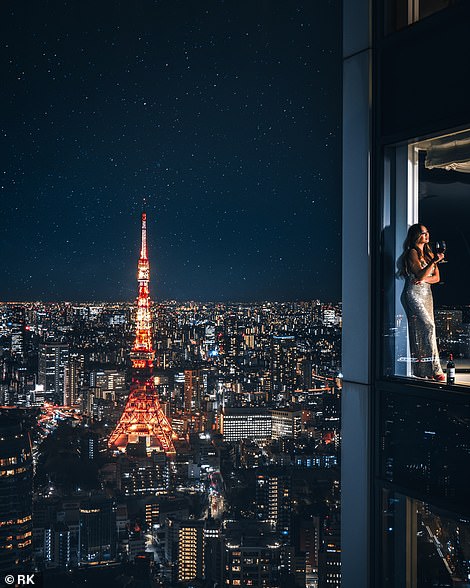 LEFT: This ethereal image was taken at the Tianwen Platform in Jishou, central China. RK told MailOnline Travel: ‘Chinese architecture is cool.’ RIGHT: This spellbinding image is of RK’s home city of Tokyo – ‘one of the most glamorous cities in the world’. The illuminated Eiffel Tower lookalike is the 332.9m- (1,092ft) high Tokyo Tower, an observation and communications tower built in 1958 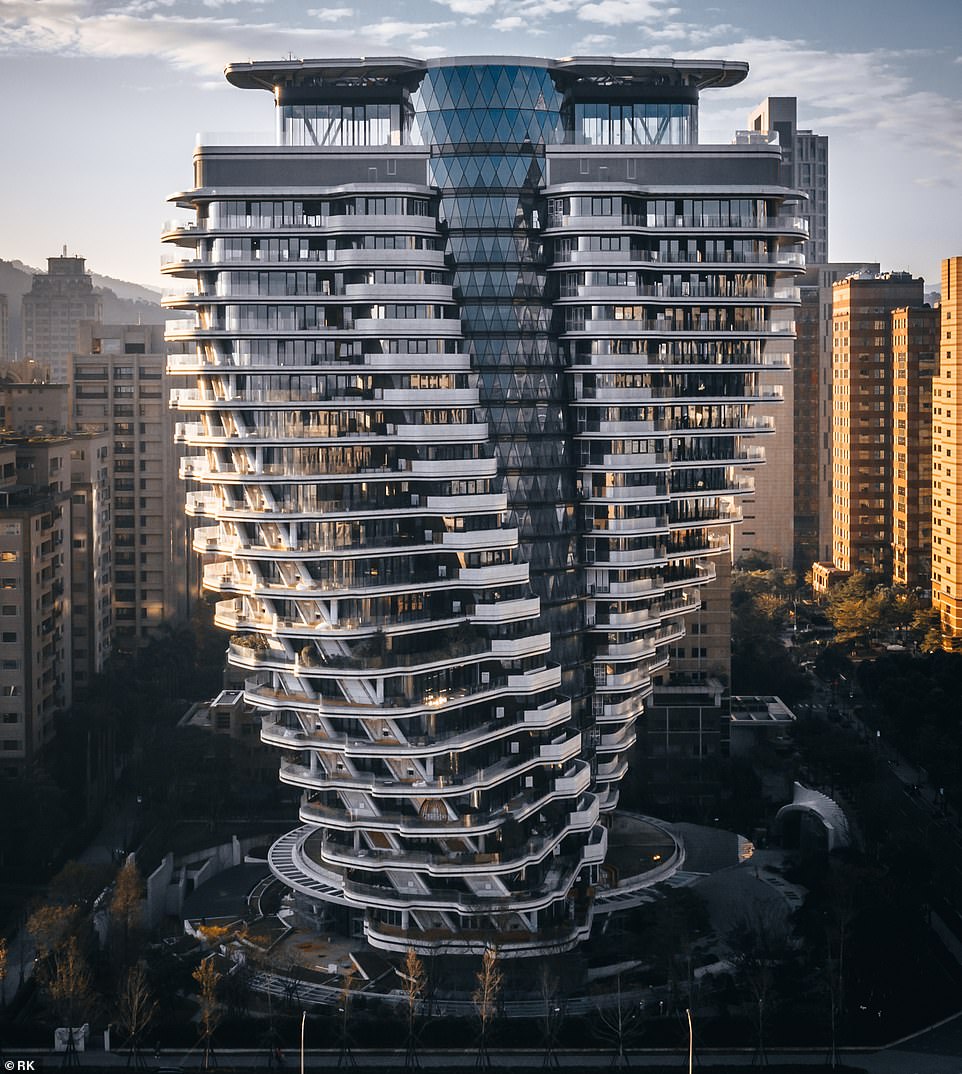 This dizzying picture showcases the Tao Zhu Yin Yuan apartment building in Taipei in all its glory. RK said: ‘Architecture is a visual art, and the buildings speak for themselves’ 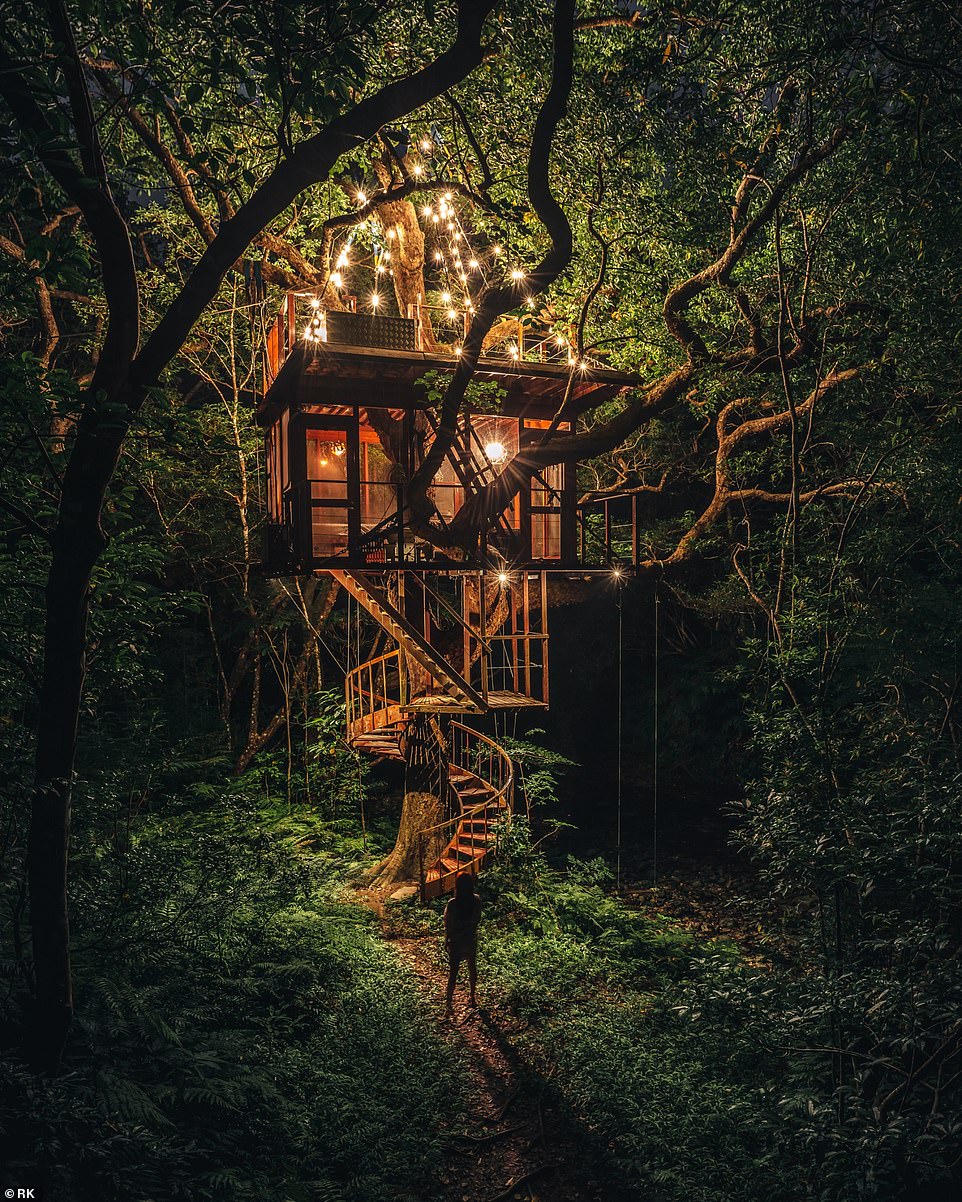 ‘Go into the woods, go into a fairy tale,’ RK said about this image, which was taken at the sustainable Treeful Treehouse resort in Okinawa, a prefecture off the southwest coast of Japan made up of more than 150 islands 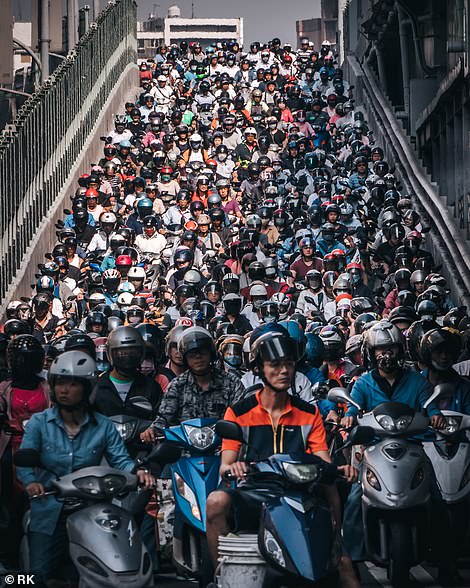 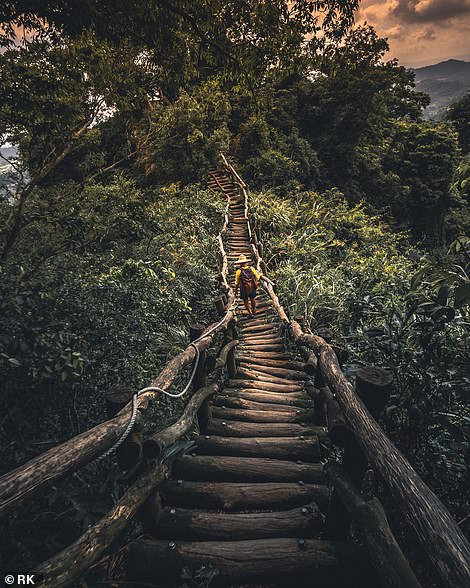 LEFT: Taken in Taipei, Taiwan, this photograph showcases RK’s signature style ‘The Dense’. In these images, every inch of the shot is filled with action and colour. RIGHT: This amazing image was taken on one of the Dakeng Trails in Taichung, Taiwan. When RK posted this image on Instagram he wrote: ‘Rough road that leads to the heights of greatness. Life is not always perfect. Like a road, it has many bends, ups and downs, but that’s its beauty’ 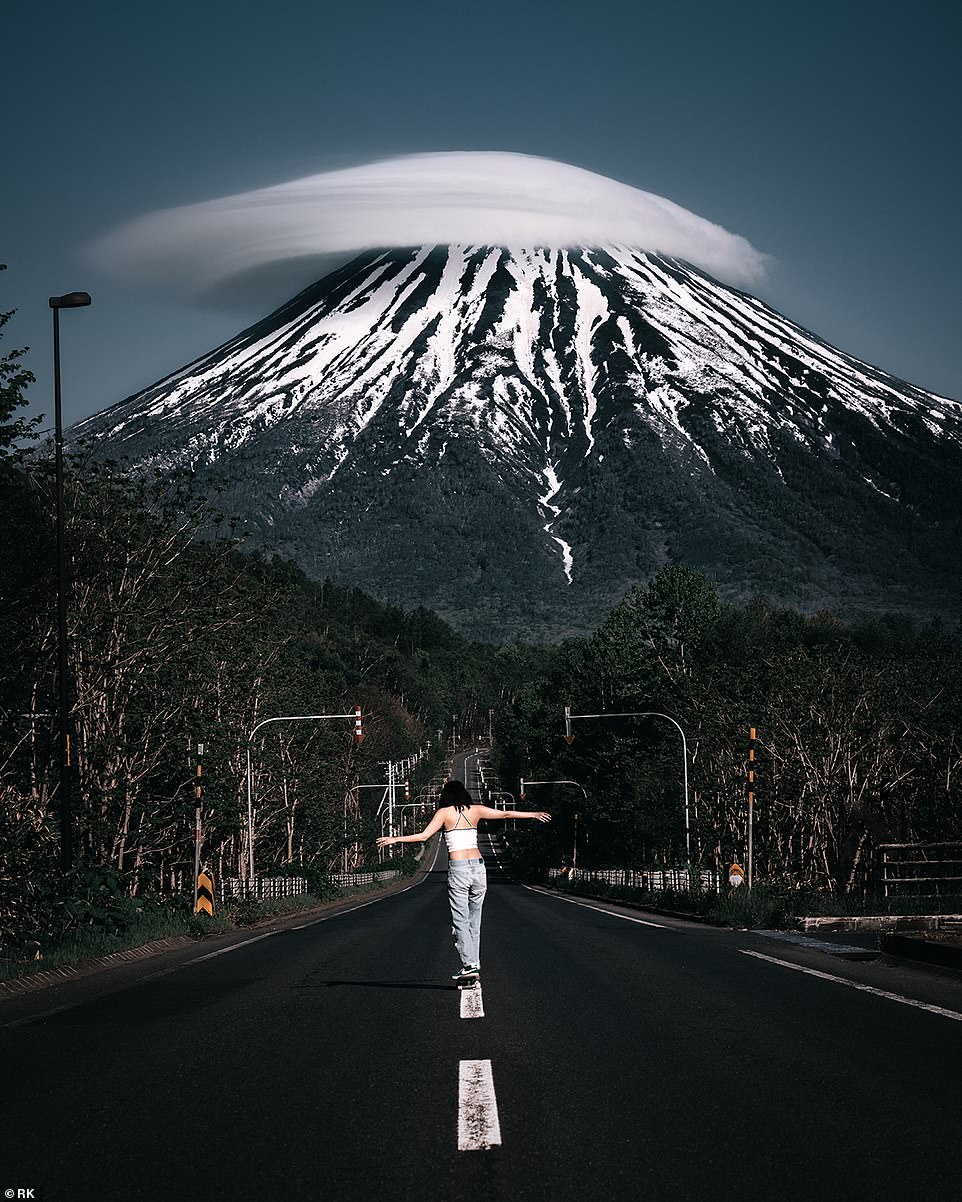 In this striking image, a woman skateboards down a road on Hokkaido, in front of active volcano Mount Yotei, which has a lenticular ‘UFO’ cloud draped over its summit. One of RK’s followers commented: ‘OMG, this miraculous picture is perfect!’ 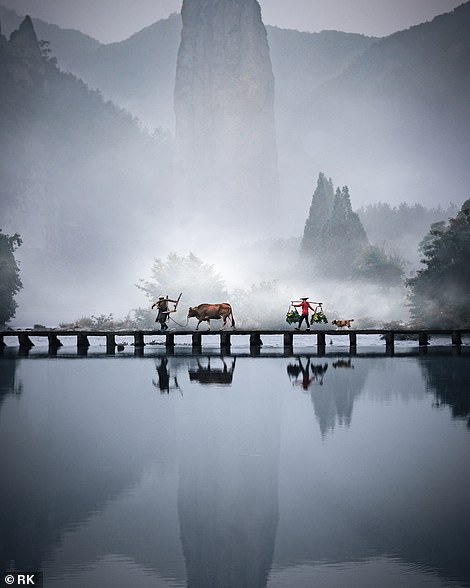 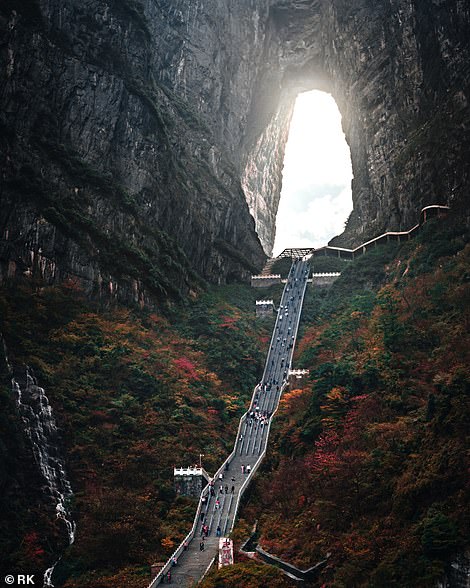 LEFT: This photograph was taken at an undisclosed location in China. RK’s Instagram caption for it reads: ‘I’m getting some great vibes from China.’ A follower, meanwhile, commented: ‘This is just magical.’ RIGHT: At China’s 4,980ft-tall Tianmen Mountain in the Tianmen Mountain National Forest Park, near Zhangjiajie city, is this eye-opening opening – ‘Heaven’s Gate’. Visitors can reach this lens-baiting portal via a cable car or by taking a bus up a narrow road with 99 bends. After disembarking, they then go on a half-hour odyssey up the ‘Stairway to Heaven’ – 999 steps (it’s a lucky number in Chinese culture) that lead to the 431ft- (131m) high, 98ft- (30m) wide portal, formed by soil and water erosion over hundreds of years 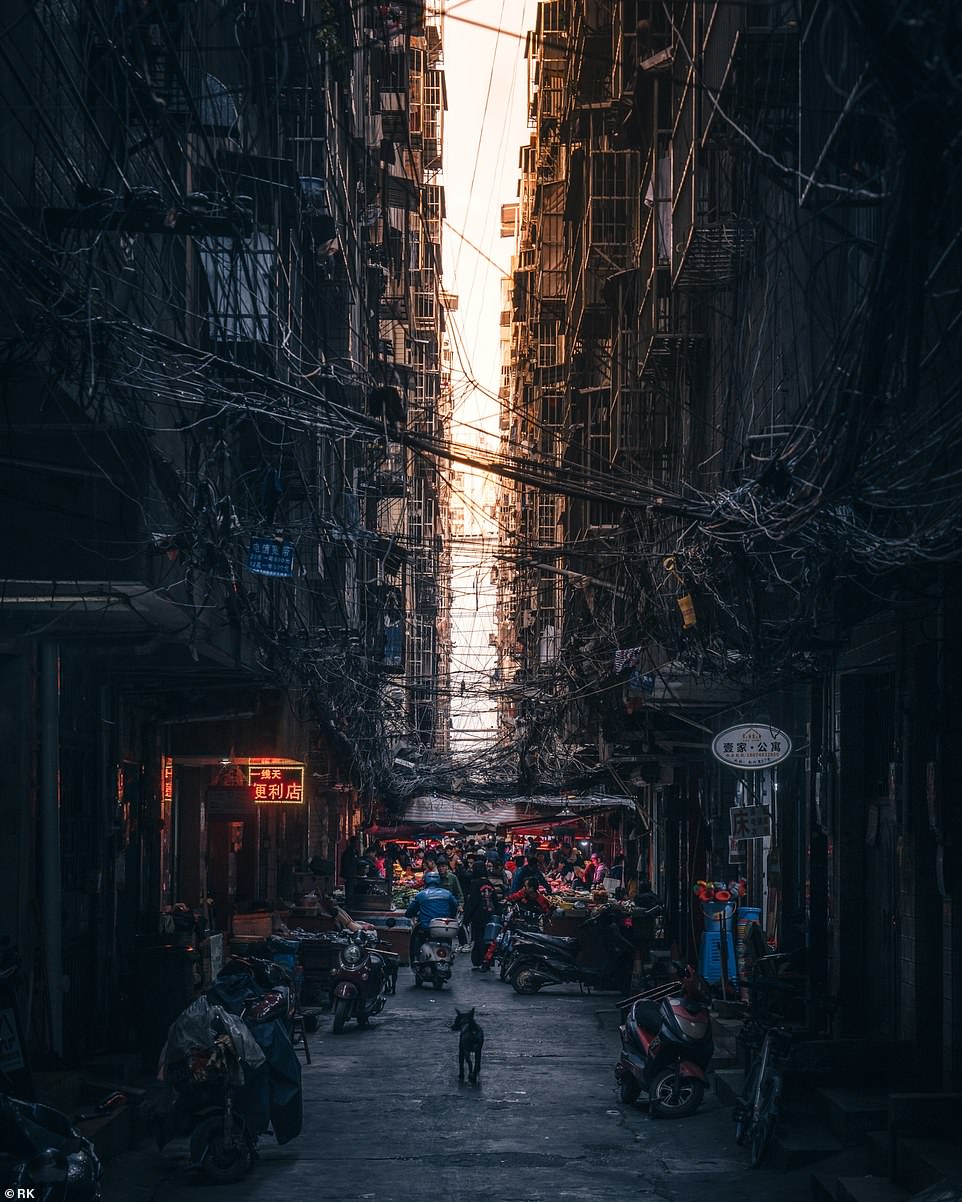 RK took this moody market shot in Nanning, China. One of his followers commented: ‘This is such an amazing shot. Incredible how they build the residences so close together. You can tell people are very hardworking and diligent and appreciate what they have’ 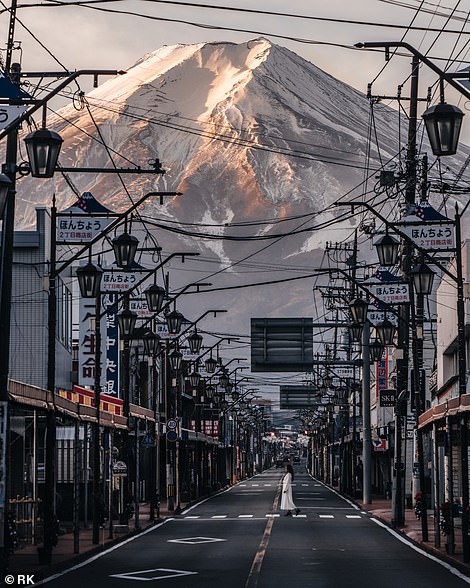 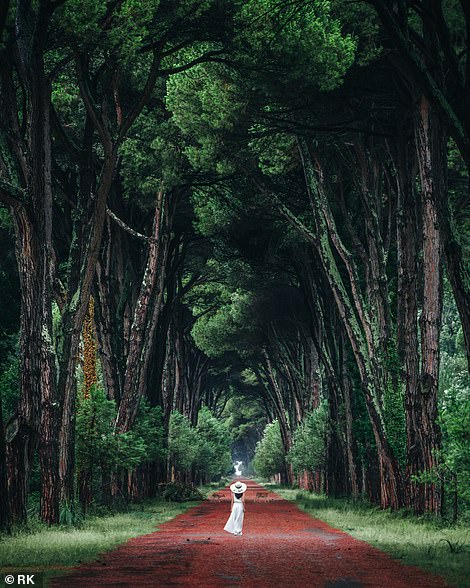 LEFT: A lone woman in white crosses an almost-empty street with Japan’s mighty 12,389ft- (3,776m) tall volcano, Mount Fuji, looming in the distance. RIGHT: While most photographers train their camera on the tourist-mecca leaning tower when they visit Pisa, RK picked a spot that was far less crowded 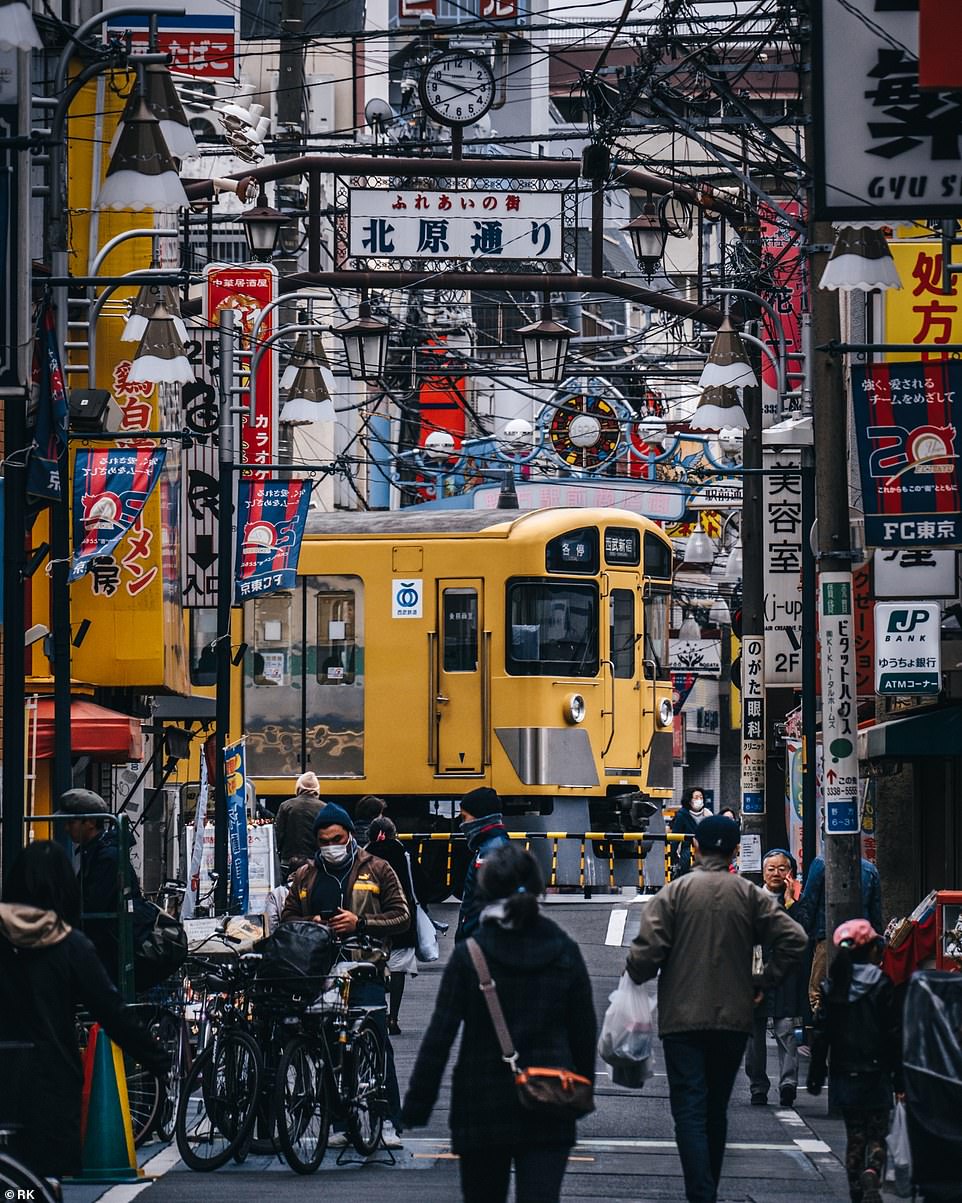 RK took this brilliant image in Tokyo. He explained: ‘The yellow train provides local shuttle service every day… [It] brings warmth to this winding local street’ 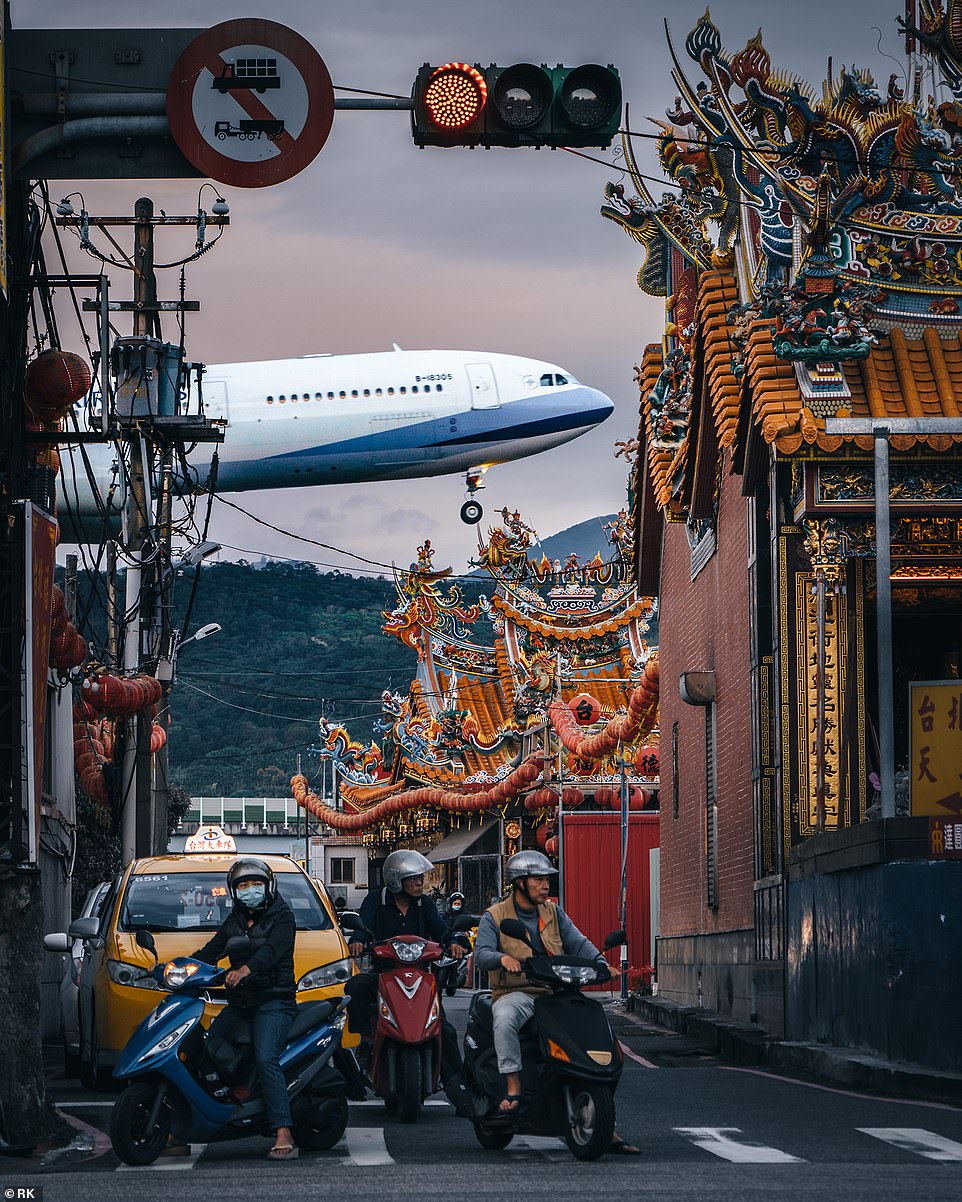 In response to this perfectly timed image, taken in Taipei, Taiwan, one of RK’s followers wrote: ‘I am in awe with you[r] work. You are an amazing photographer my friend!’