The notoriously polite Japanese may find it difficult to say ‘no’, but a surge in bad behaviour from foreigners has led to some of the country’s tourist attractions telling them to stay away.

Incidents cited have included visitors playing loud music at sacred Buddhist temples, splashing in holy fountains, climbing on roofs to take better pictures, bringing their own food to eat in restaurants and using plates as ashtrays.

Nanzoin’s temple in Sasaguri, Fukuoka – which is a draw with its huge reclining Buddha – has gone to the lengths of posting signs in 12 languages telling non-Japanese travellers to stay away, after a series of verbal warnings failed.

Calmer karma: The reclining Buddha at the Nanzoin Temple, Sasguri, whose restful repose was interrupted by loutish tourists splashing in fountains and playing loud music 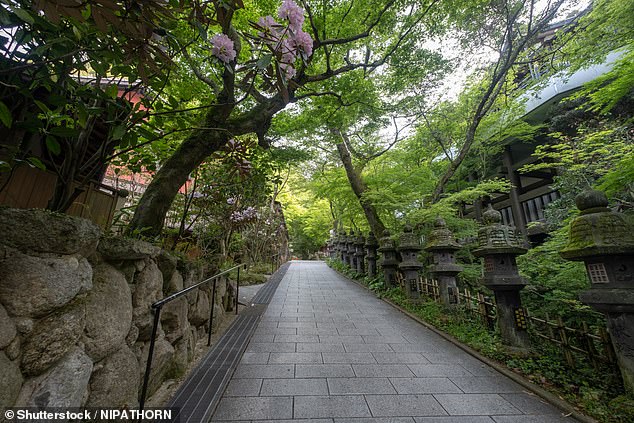 Tranquillity: The green park at Nanzoin temple shown on a quiet day without busloads of rowdy tourists taking pictures of the sacred site. Notices, in 12 languages, ban foreigners from here

The chief priest Kakujo Hayashi said the rot set in about 10 years ago, when as many as 20 to 30 busloads of cruise ship passengers visited the temple each day.

Some of the visitors played loud music, splashed in a holy waterfall and one climbed on the roof to take better photographs.

For a while in 2017, another religious site – Yatsushirogu Shinto shrine in Yatsushiro, Kumamoto – asked regular worshippers to stay away on cruise ship days in a bid to accommodate the droves of visitors but eventually concluded its congregation came first and closed to outsiders on days the port was busy.

Bowing to pressure from city officials, the shrine reopened to visitors last year, after the ban led to a decline in business at local shops. 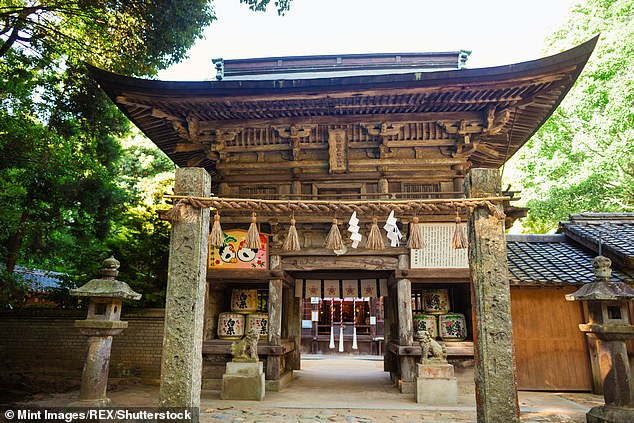 Divine shrine: Yatshusirogu Shinto shrine bowed to pressure from city officials and reversed a ban on cruise passengers after shops complained it had left a dent in their profits. Sakurai Shrine, Fukuoka – from the same tradition – is shown above

But it is not just sacred sights that are reacting to boorish behaviour, reports the Asahi Shimbun.

Izakaya bar in Kyoto, its owner says, has seen its fair share of uncouth antics with foreigners bringing in food to eat, using plates as ashtrays and flicking their cigarette ash on the floor.

Instead of using signs, the pub has adopted the more polite and less direct approach, typical of the Japanese, of telling groups of more than five overseas tourists that the restaurant is fully booked when it isn’t.

In 2016 Japanese media called for Chinese-only zones at tourist attractions after the poor behaviour of a group of visitors.

A woman gatecrashed a forbidden area at Ueno Park in Tokyo while others were seen at Osaka Castle Park breaking off flowers to decorate their hair and man-handling the branches.

Their destructive actions caused outrage in the country, leading to one unnamed talk show presenter suggesting that designated photography areas should be set up for tourists from China.

There were 31.2million foreign visitors to Japan in 2018.