Japan’s Foreign Minister has warned that Britain leaving the EU without a trade deal could threaten the UK’s automotive industry.

Tarō Kōno today said that a No Deal exit would have ‘very negative’ consequences for more than 1,000 Japanese firms operating in the UK.

He told the BBC’s Today show on Radio 4 that he was concerned that a lack of trading agreement would mean longer inspections for car parts and other goods coming to the UK from other European countries.

‘Right now they have a very smooth operation,’ he said. ‘They are stuck, for each part, only for a few hours.

‘But, if there’s a No Deal Brexit and if they have to go through actual customs inspections physically, those operations that may not continue.’

‘Many companies are worried about implication because they don’t know what’s going to happen,’ he added.

Both Boris Johnson and Jeremy Hunt have pledged to keep the option of a No Deal divorce from the bloc on the table if they become prime minister.

But while Mr Johnson has vowed to deliver Brexit by October 31 ‘do or die’ Mr Hunt has suggested he would be willing to agree to another delay if more time was needed to strike a deal. 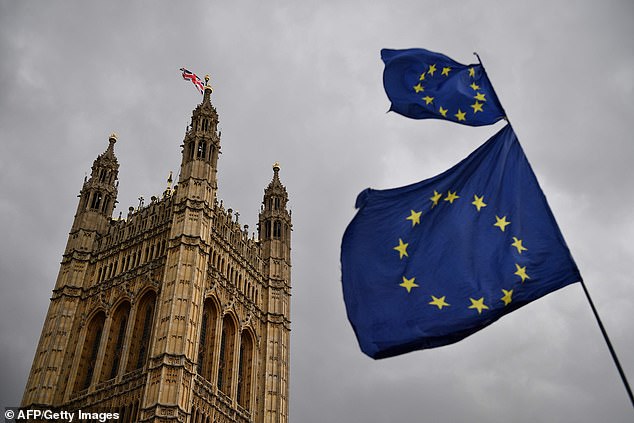 Japan’s Foreign Minister has warned that a No Deal Brexit could increase the amount of time inspections for car parts take (pictured: the EU flag outside Parliament)

Japanese firm Fujitsu told the broadcaster in a separate interview that it already has contingencies in place for a No Deal exit and assured listeners that it did not involve closing UK offices.

Sony and Panasonic have already relocated their EU headquarters from Britain to the mainland of the continent. Honda has announced that it is planning to do the same.