Japan’s Masatora Kawano punches the floor in anger after VOMITING on himself and then collapsing to the ground in exhaustion before CONTINUING the 50km walk race to finish 6th… while this Guatemalan racer gives his private parts a soak to cool down!

Japan’s Masatora Kawano showed super-human spirit to finish a gruelling 50km race after vomiting on himself and collapsing to the ground.

Kawano was in the medal hunt when he appeared to vomit down himself and then collapsed in exhaustion before hitting the ground in frustration as his race looked to be over.

However, Kawano somehow managed to haul himself back to his feet to continue racing despite his dream of medalling vanishing before his eyes in an instance. 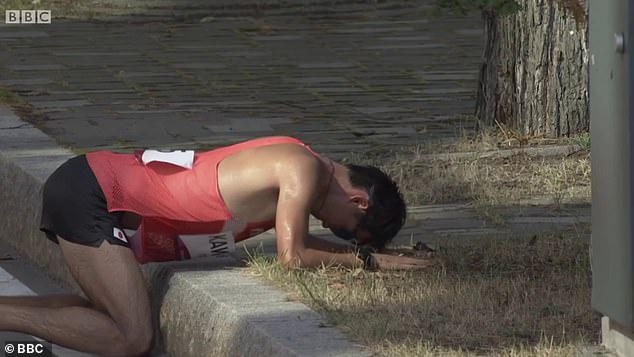 The Japanese athlete, who was one of the contenders to finish on the podium before the race, admirably ended up finishing the race in sixth position.

Kawano was not the only one to suffer a tough moment in what was a physically-draining race in 31 degrees heat, with over 20 per cent of the field failing to finish.

In a more light-hearted moment, Guatemala’s Erick Barrondo was seen soaking his private parts in a bid to stay cool during the race. 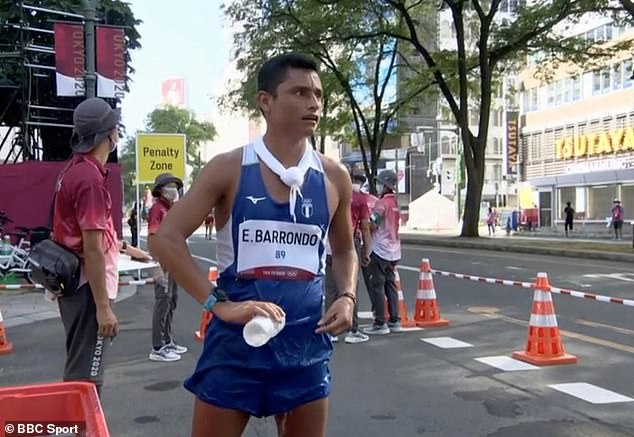 Poland’s Dawid Tomala put in a dominant performance to claim the gold, finishing in just under four hours with a time of 3:50:08.

German race walker Jonathan Hilbert was not too far behind him, crossing the line in second position to win the silver medal.

There was a late twist in the battle for the bronze, with a last-gasp charge from Canada’s Evan Dunfee seeing him finish just ahead of Spain’s Marc Tur at the line.

Tur’s compatriot, Jesus Angel Garcia, was way down the field, coming in 35th, but just finishing was still a huge achievement for the 51-year-old, who is competing at his eight Olympics Games. 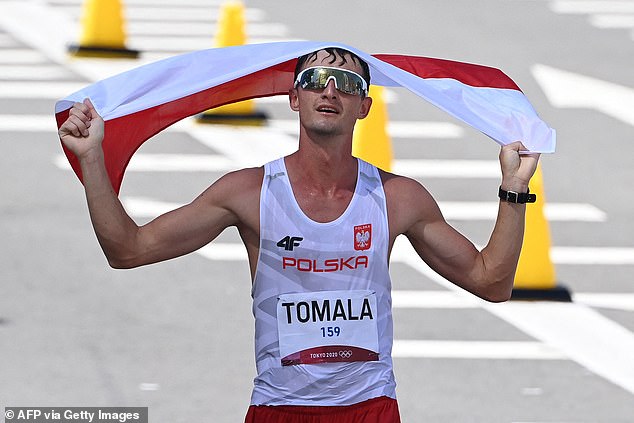