Japan’s newly appointed Minister for Cybersecurity has revealed he has never used a computer in his entire life.

Yoshitaka Sakurada, 68, also in charge of the 2020 Tokyo Olympics, told the Japanese parliament that he has ‘directed staff and secretaries to do that kind of thing’.

Taking questions from lawmakers yesterday, Sakurada also made comments indicating he has no idea what a USB port is.

Computer says no: Yoshitaka Sakurada, 68, told the Japanese parliament that he has never used a computer in his entire life but that he ‘has directed staff to do that kind of thing’

The minister made the admission at a parliamentary committee meeting, when asked by an opposition lawmaker if he was computer literate.

‘I’ve been independent since I was 25 and have always directed my staff and secretaries to do that kind of thing,’ Sakurada replied. ‘I’ve never used a computer!’

‘I give instructions to my aide and so I don’t punch into a computer myself,’ he said. ‘But I am confident our work is flawless.’

When asked about the power grid and malware, Sakurada said USB was ‘basically never used’ in the utility systems, appearing to not know what it might be.

Lawmakers laughed incredulously at his replies, which were highlighted in Japanese media. Questioning and answers in Parliament are also carried live on national TV. 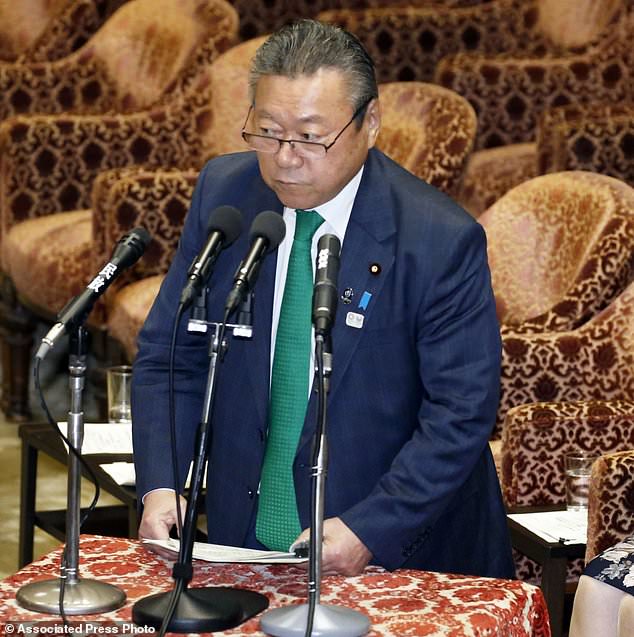 New job: Sakurada was named cybersecurity and Olympics minister last month by Prime Minister Abe, having never held a cabinet position before during his 22 years in parliament

Ministers in Japan almost always get parliamentary questions in advance. Often their answers are based on briefings from ministry bureaucrats.

In Sakurada’s exchange, bureaucrats were seen rushing over to give him sheets of paper with information.

Ministers are tapped by Prime Minister Shinzo Abe, and Sakurada was named to his position in the latest Cabinet reshuffle last month.

Although the minister is not expected to have much hands-on responsibility in the handling of either cybersecurity or the Olympics, Sakurada’s high-profile bungling is an embarrassment for Abe.

Sakurada, a graduate of Meiji University, was first elected to parliament in 1996, representing Chiba prefecture, near Tokyo.

His favorite issues are pushing for Japan’s economic prosperity and supporting its culture. ‘There is no genius that surpasses effort,’ is his favorite motto.