Japan’s suicide rate falls by a fifth during coronavirus pandemic

Japan’s suicide rate has fallen by a fifth during the coronavirus pandemic as workers spend less time with bullying bosses.

According to the country’s Ministry of Health, Labor and Welfare, the number of suicides this April was down by nearly 20 per cent compared to the same month in 2019.

Prime Minister Shinzo Abe’s news conference is broadcast on a large screen at Shinjuku district in Tokyo on Thursday. Japan’s suicide rate has fallen by a fifth during the coronavirus pandemic

This marks the country’s lowest suicide figure for at least the past five years.

The ministry believes not going into the office, less commuting and more time with the family are all indirect ways the Covid-19 pandemic is positively impacting people’s well-being.

Lockdown measures mean many are working from home and having less contact with authoritative figures such as bullying bosses, coworkers, or classmates in the case of children.

This is having a positive impact on people’s mental health, the ministry has found, despite the stresses of living through a global pandemic.

Suicide is considered a major social issue in Japan. 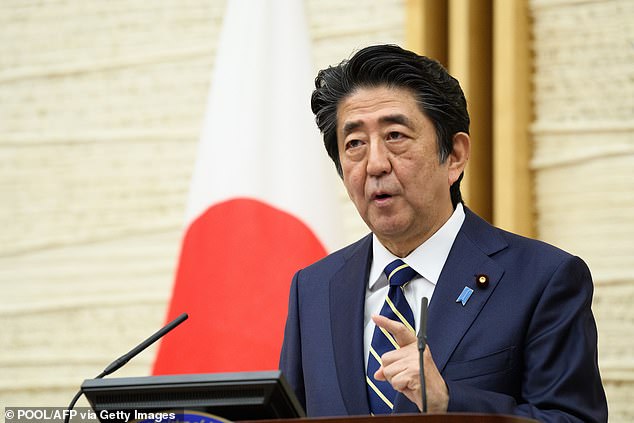 Despite a decline in overall suicides in recent years, Japan has a growing number of young people taking their own lives.

Japan has had about 16,000 infections and 687 deaths from the coronavirus outbreak, much lower than many industrialised nations.

The number of serious cases requiring ventilation was 259, according to the latest figures from the health ministry.

Prime Minister Shinzo Abe on Thursday announced the end of the state of emergency for most regions of the country.