The senior adviser was pictured climbing out if his vehicle following the meal at the Washington Naval Observatory residence in Washington DC as the partial government shutdown continued with 800,000 federal workers furloughed.

Kushner was sent on his way by a smiling staff member who opened his car door before he walked through the gate of his home in the capital with a slight smile on his face. 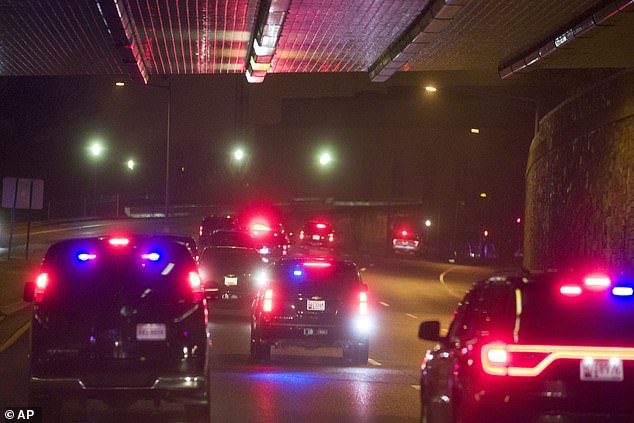 The Washington Naval Observatory meal was with his father-in-law, President Donald J Trump who arrived with a motorcade

But perhaps he was simply putting on a brave face as the shutdown showed no sign of ending.

His father-in-law Trump – whose motorcade was pictured traveling to the dinner – had called off his vacation to his private Florida club because of the shutdown.

The budget impasse centers on Trump’s demand for money for his proposed U.S.-Mexico border wall and the refusal of Democrats to provide that. Both sides expect the stalemate to last into the new year.

The Environmental Protection Agency will keep disaster-response teams and other essential workers on the job as it becomes the latest agency to start furloughing employees in the government shutdown.

Spokeswoman Molly Block says the EPA will implement its shutdown plan at midnight Friday. That will mean furloughing many of its roughly 14,000 workers.

The furloughs exclude emergency response workers for disasters. Other EPA employees who will be staying on the job include workers deemed essential to preventing immediate public health threats at more than 800 Superfund hazardous-waste sites across the country. 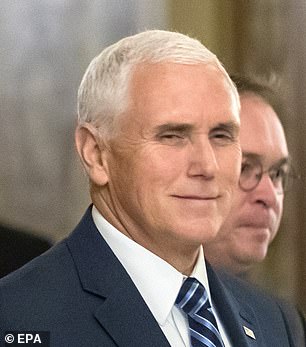 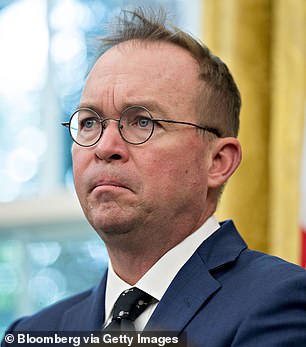 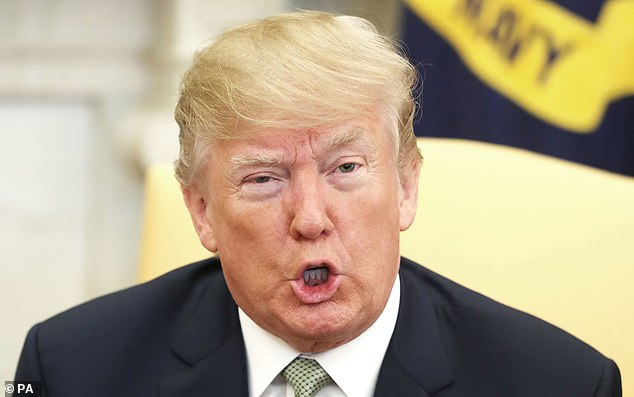 President Trump tweeted Friday: ‘We build a Wall or … close the Southern Border’

The EPA had enough funding to keep running a week longer than some other agencies.

On Friday, Lopez Obrador said: ‘We are always seeking a good relationship with the United States. We do not want to be rash. we have not commented on this issue, because it is an internal affair of the U.S. government.’

Trump also threatened to cut off aid to Honduras, El Salvador and Guatemala, countries from which many migrants have fled. 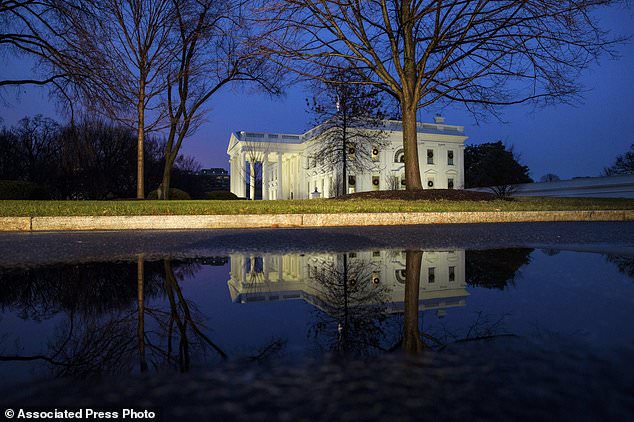 The White House is seen on Friday in Washington. The partial government shutdown will almost certainly be handed off to a divided government to solve in the new year

Democrats are holding firm in the standoff over a border wall, saying they won’t seriously consider any White House offer to end the government shutdown until it has a public endorsement from President Donald Trump.

Drew Hammill, spokesman for House Democratic leader Nancy Pelosi said Democrats will not fund Trump’s ‘immoral, ineffective and expensive wall.’ Hammill said Democrats are waiting for Trump to publicly endorse a proposal to end the shutdown because he ‘has changed his position so many times’.

The White House is accusing Democrats of walking away from the negotiating table. Mulvaney said Democrats are ignoring an offer for border wall funding below Trump’s original $5billion request.

‘There’s not a single Democrat talking to the president of the United States about this deal,’ he claimed. ‘My gut was that (Schumer) was really interested in doing a deal and coming to some sort of compromise. But the more we’re hearing this week is that it’s Nancy Pelosi who’s preventing that from happening.’

He alleged that if Pelosi ‘cuts a deal with the president of any sort before her election on January 3 she’s at risk of losing her speakership, so we’re in this for the long haul’. 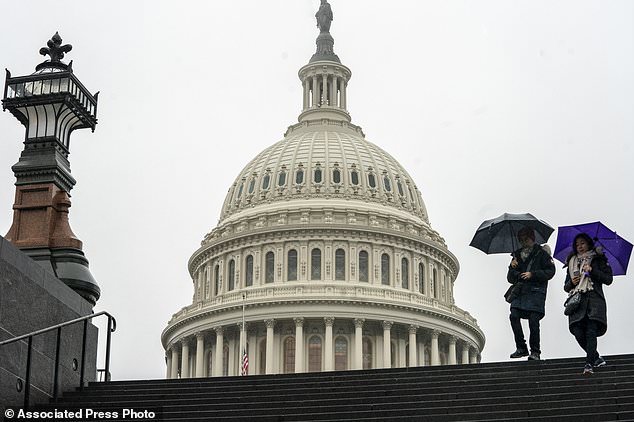 Democrats brushed off the White House’s attempt to cast blame.

‘For the White House to try and blame anyone but the president for this shutdown doesn’t pass the laugh test,’ said Justin Goodman, a spokesman for Schumer.

Pelosi has vowed to pass legislation to reopen the nine shuttered departments and dozens of agencies now hit by the partial shutdown as soon as she takes the gavel, which is expected when the new Congress convenes.

Hammill added that Democrats ‘are united against the President’s immoral, ineffective and expensive wall’ and said Democrats won’t seriously consider any White House offer unless Trump backs it publicly because he ‘has changed his position so many times.’

‘While we await the President’s public proposal, Democrats have made it clear that, under a House Democratic Majority, we will vote swiftly to re-open government on Day One,’ Hammill said in a statement.

But even that may be difficult without a compromise because the Senate will remain in Republican hands and Trump’s signature will be needed to turn any bill into law. 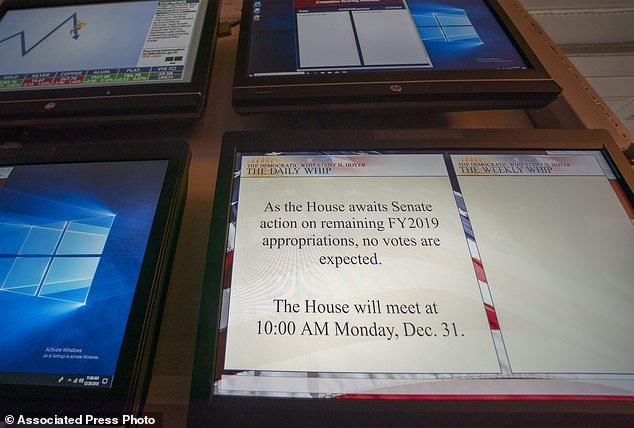 A monitor in the House of Representatives displays a schedule update on Capitol Hill in Washington, Friday

The shutdown began December 22 and is idling hundreds of thousands of federal workers.

The Office of Personnel Management is advising furloughed federal workers to speak directly with landlords, mortgage companies and creditors to explain their lack of funds and work out reduced or deferred payment plans.

The OPM suggests that federal workers follow up the calls with letters that recount the conversation and share their phone number, address and the details of the call.

President Donald Trump has canceled his New Year’s plans and will not be traveling to Florida amid of a partial government shutdown that is expected to continue into the new year.

Acting White House Chief of Staff Mick Mulvaney says during a Friday morning appearance on Fox News Channel that the president was in D.C. ‘all weekend, all Christmas’ and is ‘staying in Washington D.C. over New Year’s.’ 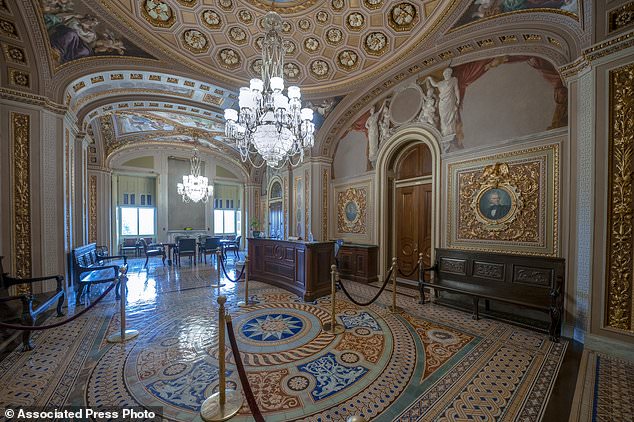 The Senate Reception Room is idle at the Capitol in Washington, Friday

Trump canceled a planned trip last week to his private Mar-a-Lago club in Palm Beach, Florida, where he usually spends the holidays and many winter weekends.

Press secretary Sarah Sanders tells CBS Friday of Democrats: ‘They’ve left the table all together, so of course we are far apart.’

It’s looking increasingly as if the partial government shutdown will be handed off to a divided government to solve. This, as agreement eludes Washington in the waning days of the Republican monopoly on power.

Now nearly a week old, the impasse is idling hundreds of thousands of federal workers and beginning to pinch citizens who count on varied public services.

For example, the government says it won’t issue new federal flood insurance policies or renew expiring ones until the budget for them is restored.

Congress is closing out the week without a resolution in sight over the issue holding up an agreement – Trump’s demand for money to build a border wall with Mexico and Democrats’ refusal to give him what he wants.