Jarryd Hayne has been found guilty of two counts of sexual assault by a jury in a sensational end to a two-and-a-half year saga with the judge saying jail ‘is inevitable’.

A NSW District Court jury of seven men and five women reached its sensational verdict just after 2pm on Monday.

Dressed in a black suit and tie, Hayne, 33, bowed his head in the witness box as the first guilty verdict was entered.

The superstar footballer now faces up to 14 years’ behind bars over the two charges.

Hayne was found not guilty of charges of recklessly inflicting actual bodily harm to the woman.

The rugby league icon and his new wife Amelia Bonnici hugged in court after the sentence was handed down.

Ms Bonnici rested her head on his chest for several moments, and later looked shell-shocked as the pair walked from court without holding hands.

Hayne will be under virtual house arrest at home in Woy Woy, on the NSW Central Coast, until the time of his sentencing in May.

Judge Helen Syme allowed Hayne bail but only after one of his loved ones agreed to hand over a further surety of $50,000.

Guilty: Jarryd Hayne shielded his face with dark sunglasses and clutched Ms Bonnici’s hand as he headed to court on Monday

The decision followed three full days of deliberations at Sydney’s Downing Centre, a two week trial – and a previous  jury trial in Newcastle last year which failed to reach a verdict.

Hayne’s victim, then 26, had claimed he had sexually assaulted her, had been ‘really rough and pushy’, forcefully removed her clothes and left her bleeding from her genitalia.

The famous footballer’s rendezvous with the woman came after he had been celebrating a bucks weekend in Newcastle and paid a cab driver $550 to drive him back to Sydney. 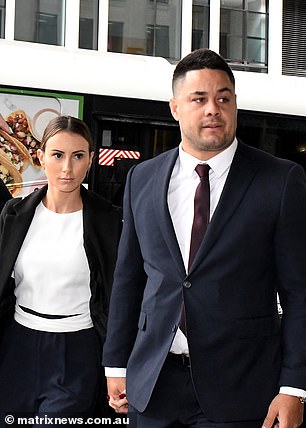 Verdict at last: Jarryd Hayne held hands with his new wife Amelia Bonnici as the second jury trial came to a close

But he asked the driver to let him ‘pick up a bag’ from a nearby suburb, where the woman lived with her mother.

The taxi waited out the front.

Hayne first met the woman via Instagram when she messaged him that he was ‘absolutely gorgeous’ about a year earlier.

The jury was told Hayne played an Ed Sheeran cover of Oasis’s Wonderwall in the woman’s room – when the driver rapped on the front door.

The woman became upset that the cab had was running and had said there was ‘no way’ she was going to have sex with Hayne.

Shortly afterwards, she alleged Hayne forcefully removed her clothes, was ‘really pushy and rough’ and left her scared. She said she had suffered cuts to her vagina which left her bleeding.

Hayne left soon after and she sent him a text message saying that ‘I’m hurting so much’.

‘I know I’ve talked about sex and stuff so much but I didn’t want to do that after knowing the taxi was waiting for you,’ she wrote in a follow-up text.

His only reply was ‘Go doctor tomorrow’. 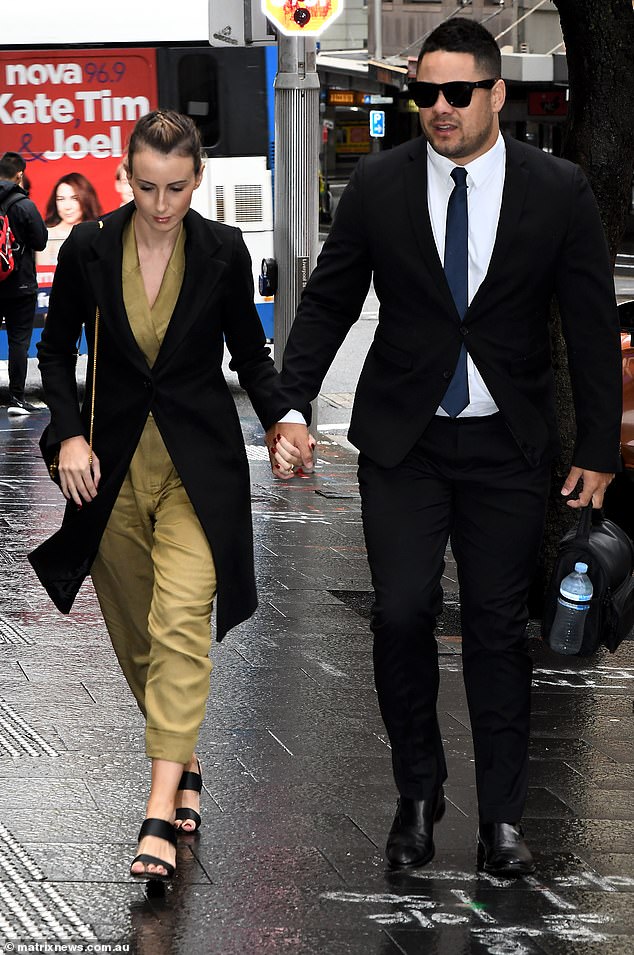 Hayne never denied the couple had been intimate but his defence told the court that he believed she was saying no to sexual intercourse and consented to other acts.

The jury retired at 12.39pm last Wednesday and as of last Friday the court heard they had made ‘good progress’ toward a verdict.

Earlier on Monday, Judge Syme had urged the jury to put out of their minds community discussion about sexual assault that has appeared in the media recently.

‘You must put out of your mind any media reporting obviously about this case, but there’s been a lot of media reporting about a lot of other things in general,’ she said, in an apparent reference to the consent debate in the media.

‘You must put those things out of your mind.’

Hayne will be sentenced on May 6 at Newcastle.