Jasmine Tookes stunned the crowds on the red carpet in a gorgeous ballgown at the Baby2Baby 10 year Gala at the Pacific Design Centre on Saturday.

The star, 31, stepped out in a beautiful sweetheart necked sleeveless gown that plunged sexily to reveal a hint of décolletage.

Jessica stood out in the classic powder blue gown which boasted a feathered over the shoulder train.

Star power: Model Jasmine Tookes stunned on the red carpet in a gorgeous ballgown at the Baby2Baby 10 year Gala at the Pacific Design Centre on Saturday (above with fiance Juan David Borrero)

The dress had a beautiful detailed ruched design that cinched at the waist and showcased her svelte figure.

The model continued to stun by revealing that the dress slashed to the thigh to reveal the a hint of the model’s long lean legs.

The star opted for a bronze blush and black mascara and eyeliner detail with a natural coloured lipstick to highlight her sensual pout. 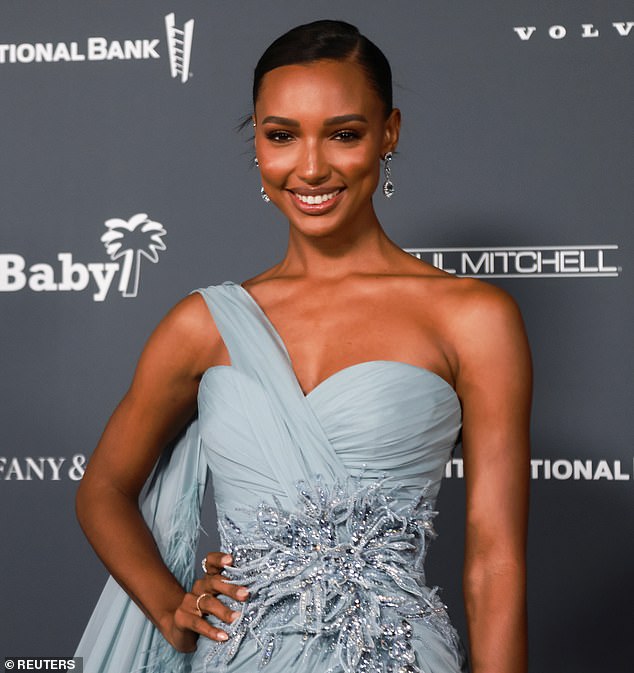 She wore her silky dark tresses in a classic chignon and finished with a pair of diamante encrusted strappy open toed sandals.

She was joined on the red carpet by her fiancé Juan David Borrero who looked suave in a navy velvet tuxedo and matching bowtie. he teamed the suit with a crisp white shirt.

The couple were amongst a host of stars who attended the star studded event on Saturday. 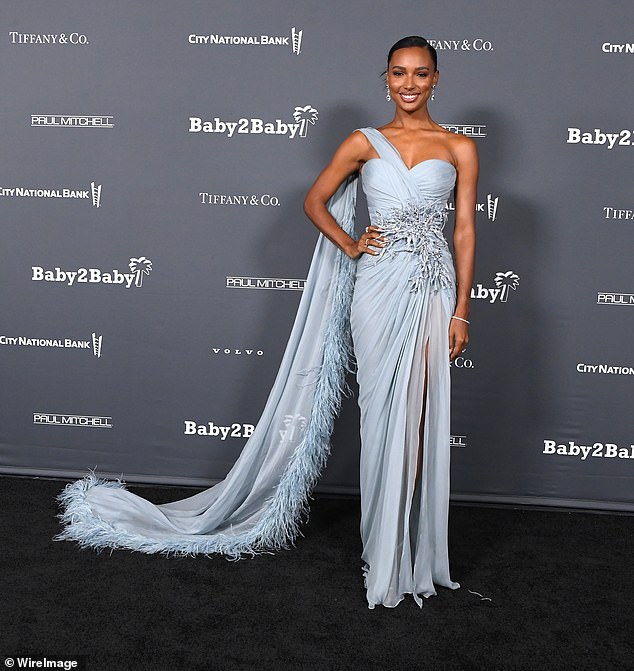 Stylish:  The model turned heads with the feathered off the shoulder train

Kobe Bryant’s widow Vanessa was the guest of honour at the fete where she was presented with the Giving Tree Award.

She is following in the footsteps of previous celebrity honourees ranging from Jessica Alba to Gwyneth Paltrow.

A negative COVID-19 test plus proof of vaccination are allegedly required for entry, according to the blog Average Socialite.

Support: The model was on had to support the charity to raise awareness and much needed funds

Baby2Baby is a Los Angeles-based charity whose aim is to get essential goods like diapers and clothes to underprivileged children.

Its board of directors includes but is not limited to a number of famous figures like Nicole Richie, Jessica Alba, Rachel Zoe, Kelly Rowland and Julie Bowen.

Emma Grede, who helped co-found Good American with Khloe Kardashian, is also one of the  members of the board. 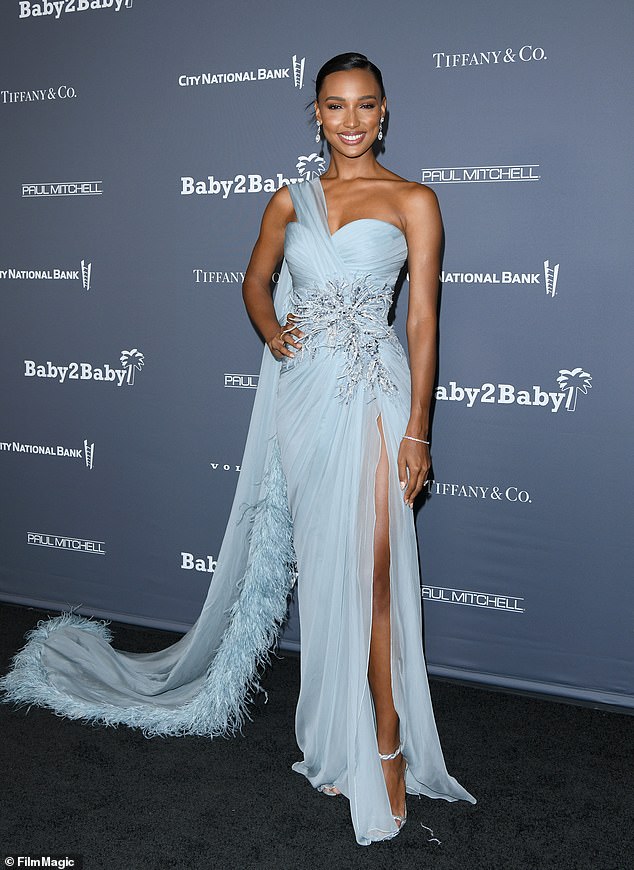 Demure: The model oozed class and sophistication at the event

Jasmine had a busy weekend as she was also a guest at Paris Hilton’s wedding extravaganza that started last Thursday.

The socialite, 40, who had walked down the aisle on Thursday at her late grandfather’s estate in Bel Air, is in the midst of her three-day celebrations and rented out the entire pier to host a star-studded party.

Guests including Demi Lovato, Billy Idol, former TOWIE star Vas J Morgan, Paris’ mother Kathy and sister Nicky all looked to be having an incredible time at the event.

The party shut down the entire Santa Monica Pier, allowing attendees to have free reign over the seaside amusement park – which boasts a giant light up ferris wheel and countless classic carnival games.

Those lucky enough to master games like ring toss or balloon bust were rewarded with vary sizes of stuffed pillows featuring the perfume mogul’s face and figure.

Speaking about her fairy-tale wedding Paris penned an emotive message about her big day to her  16.8m followers  she wrote ”Ever since I was a little girl, I dreamt of my fairy tale wedding. 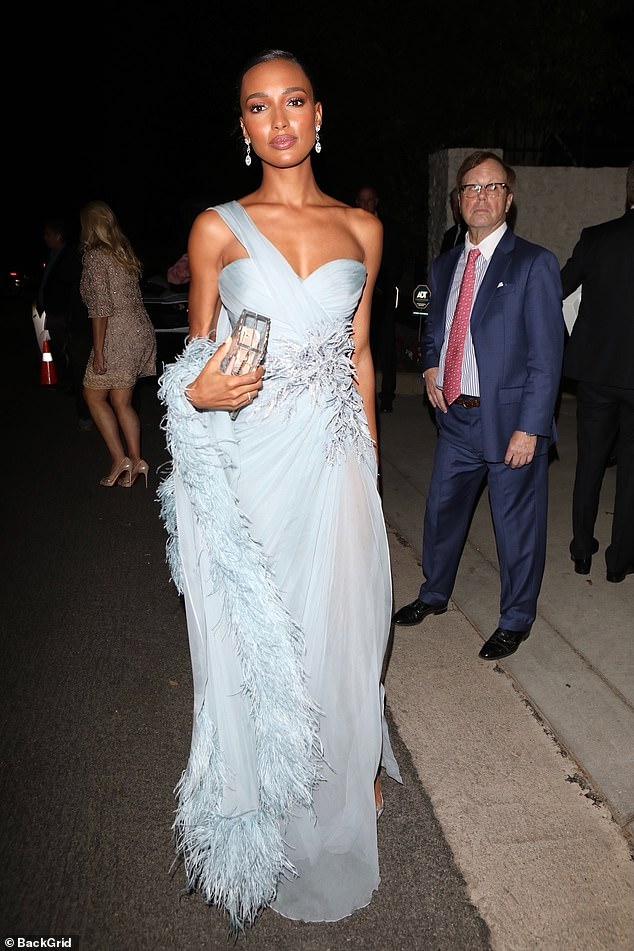 ‘I dreamt of being in a stunning gown that was beautiful, timeless and chic. I dreamt of marrying a man who was my best friend and had the sweetest, kindest heart,’

she added  that  ‘her ball gown transformed her ‘into the bride I knew’ she ‘would one day become.’

Finishing that her special day ‘ was right out of a storybook and that ‘dreams do come true,’ 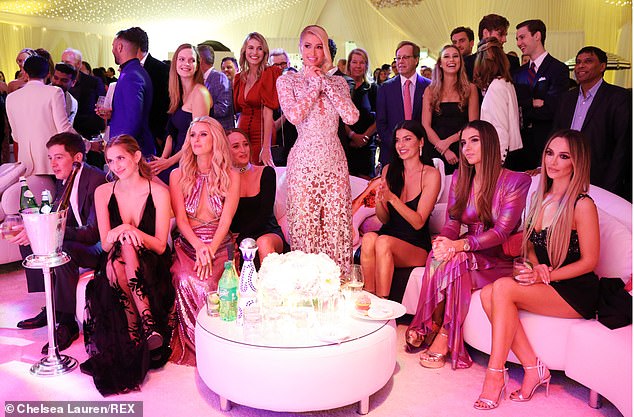