Brittany Aldean made it clear that she wasn’t bringing any more Balenciaga goods into her home in a social media post shared on Wednesday.

The 33-year-old wife of country music star Jason Aldean shared a photo to Instagram of herself carrying clear plastic bags out of her home.

Speaking out: Jason Aldean’s wife Brittany, 33, posed while seeming to throw out Balenciaga clothing in a post from Wednesday in response to controversy over the brand’s holiday campaign, which featured children and BDSM-themed teddy bears

In her photo, Brittany was seen looking sleek in an all-black ensemble featuring a slim sweater and tight black pants.

She stood tall in a set of pointy-toed black platform boots and wore her long blond locks in gentle waves cascading down her shoulders, which put the spotlight on her chunky black cat-eye sunglasses.

Rather than standard opaque trash bags, she selected clear plastic bags for her staged photo. They were filled with Balenciaga gear, including a $3000 orange handbags and $400 slide sandals.

Brittany also appeared to have a backpack slung over her shoulder that was filled with more gray Balenciaga clothing.

‘It’s trash day @balenciaga,’ she declared in her caption.

The children themselves didn’t appear to be in sexualized positions or clothing, but the photoset included other disturbing details like empty wine glasses and champagne flutes. 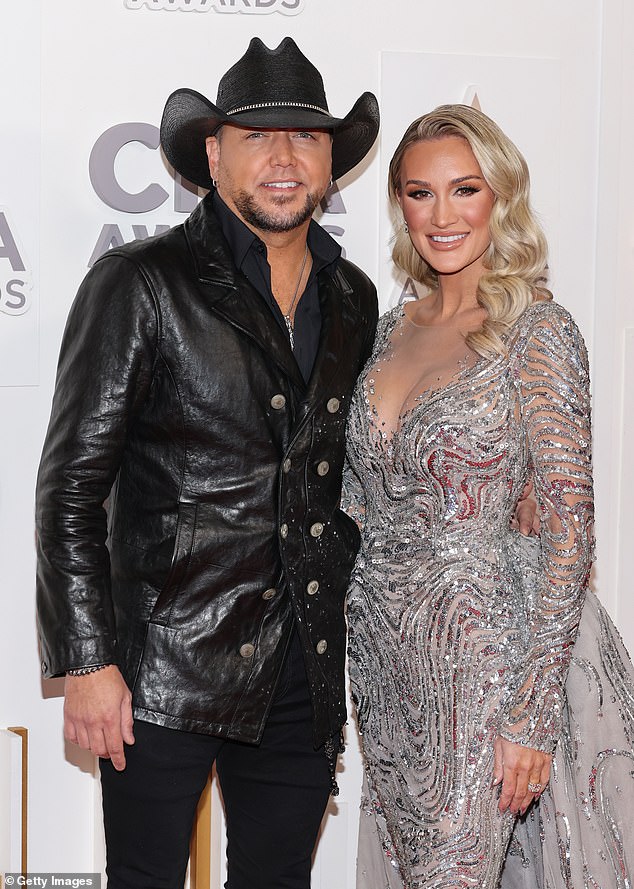 Taking it out: ‘It’s trash day @balenciaga,’ she declared in her caption; seen with Jason on November 9 in Nashville, Tennessee

Balenciaga initially shifted the blame to the photographer Gabriele Galimberti, who snapped the pictures in Paris.

However, Galimberti doesn’t appear to have designed or decorated the set on which he was photographing, and the brand subsequently agreed that he did not have control over the shoot.

For the brand’s spring 2023 campaign, celebrities including Bella Hadid and Nicole Kidman were photographed in business settings in what appeared to be a skyscraper.

However, eagle-eyed observers noted that one of the photos featured a pile of documents in the background, which were revealed to be a printout of a Supreme Court ruling in United States v. Williams, on whether child pornography could be considered a protected form of free speech.

The two photoshoots were not connected, but critics worried that together they represented a concerning culture within Balenciaga. 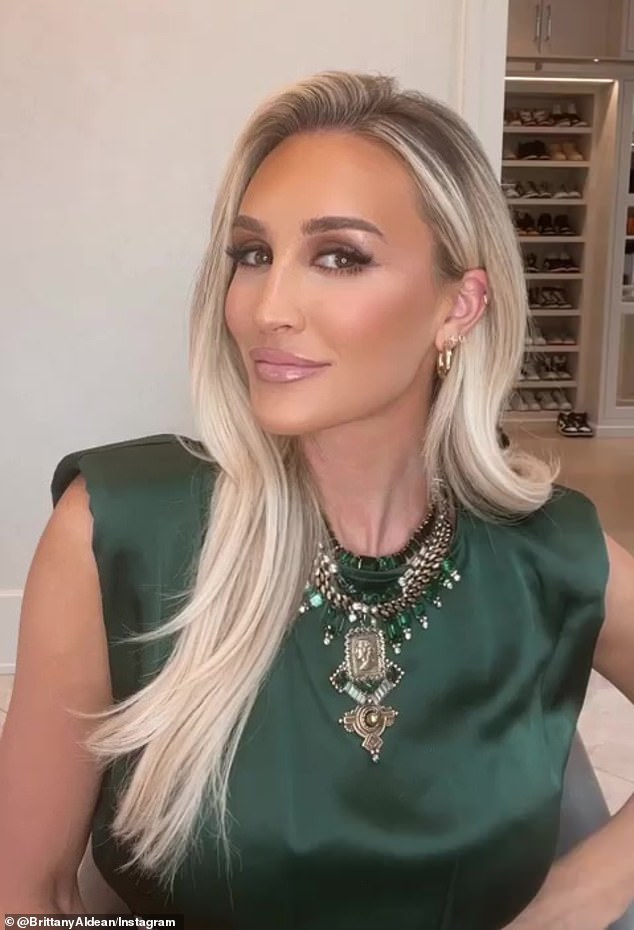 Standing up: Brittany made her distaste for Balenciaga clear, even as other stars associated with the fashion house have stayed quiet

Although it was speculated that the documents might have been left over from the filming of a legal drama, the fashion house still struck out at the ‘reckless negligence’ of North Six Inc., the company that managed the photoshoot.

Although the documents might have been an unfortunately placed prop, the spring 2023 shoot featured an art book by the painter Michael Borremans.

Borremans, a Belgian artist, has had a varied career, but he is responsible for a disturbing 2017 series of paintings titled Fire From The Sun.

The paintings depict a group of toddlers against what appears to be a photography studio backdrop, but the naked children are surrounded by severed limbs — presumably from unseen adults — in several images, while they are smeared with blood and seemingly castrated in others.

Kim Kardashian, who is a brand ambassador for Balenciaga, previously said she was reevaluating her relationship with the fashion house, though she was lambasted by critics for not cutting ties with it. 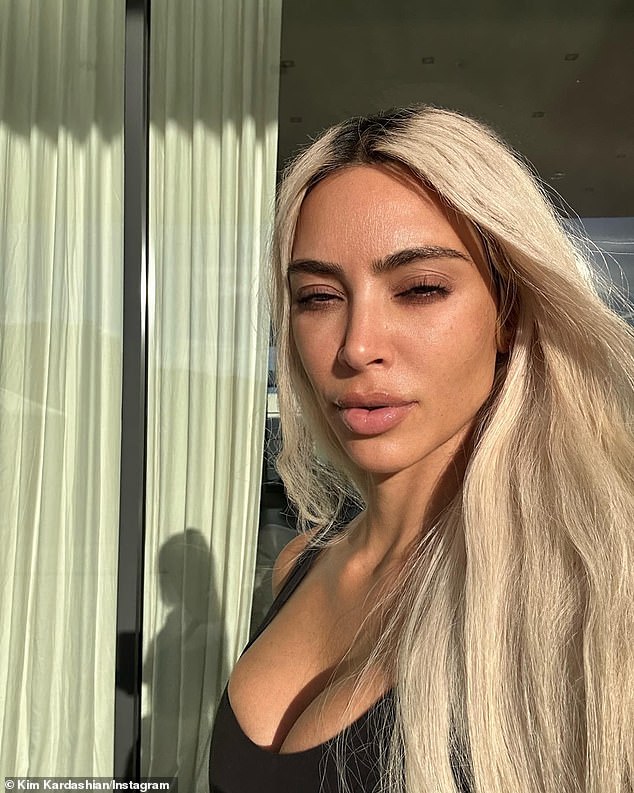 Wrapped up in it: Kim Kardashian, a brand ambassador for Balenciaga, previously said she was reevaluating her relationship with the fashion house, though she was lambasted by critics for not cutting ties with it

Brittany has had her own recent scandal after she made transphobic comments that were called out by Maren Morris and other country musicians.

In a getting-ready video, Brittany said — seemingly out of nowhere —  ‘I’d really like to thank my parents for not changing my gender when I went through my tomboy phase. I love this girly life.’

Maren and Cassadee Pope expressed outrage at her comments, which suggested that parents were forcing their children to transition and seemed to imply that transgender people were only going through a phase.

Cassadee, 32, took to Twitter on Friday and responded: ‘You’d think celebs with beauty brands would see the positives in including LGBTQ+ people in their messaging. But instead here we are, hearing someone compare their “tomboy phase” to someone wanting to transition. Real nice.’

Maren, 32, snapped back: ‘It’s so easy to, like, not be a scumbag human? Sell your clip-ins and zip it, Insurrection Barbie.’

Maren’s husband and collaborator Ryan Hurd also added in a tweet: ‘Scoring quick points by picking on trans kids isn’t something that is brave at all.’ 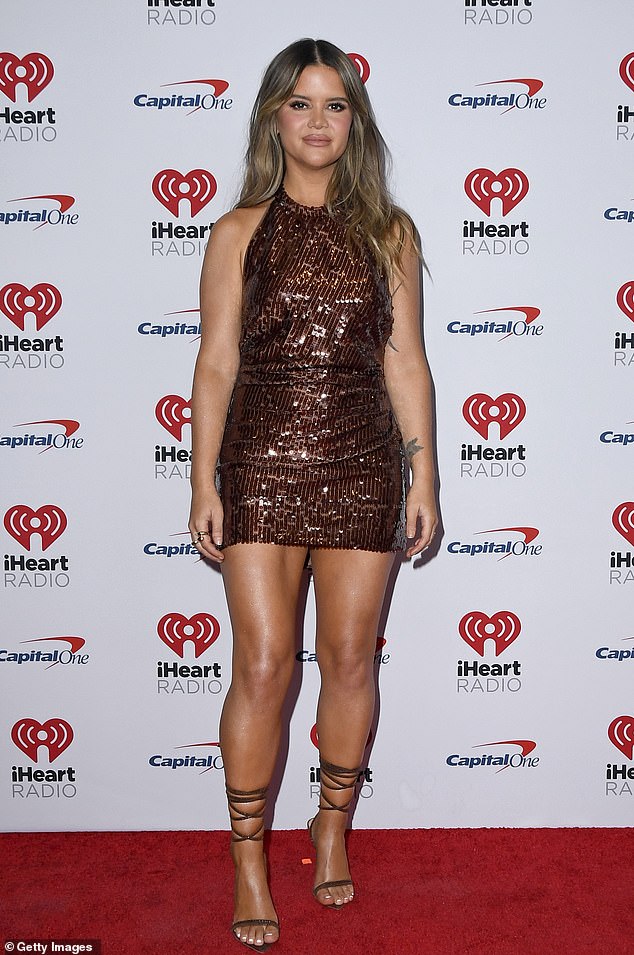 Not holding back: Over the summer, Brittany ran afoul of Cassadee Pope and Maren Morris after making transphobic comments; Morris seen in September in Las Vegas 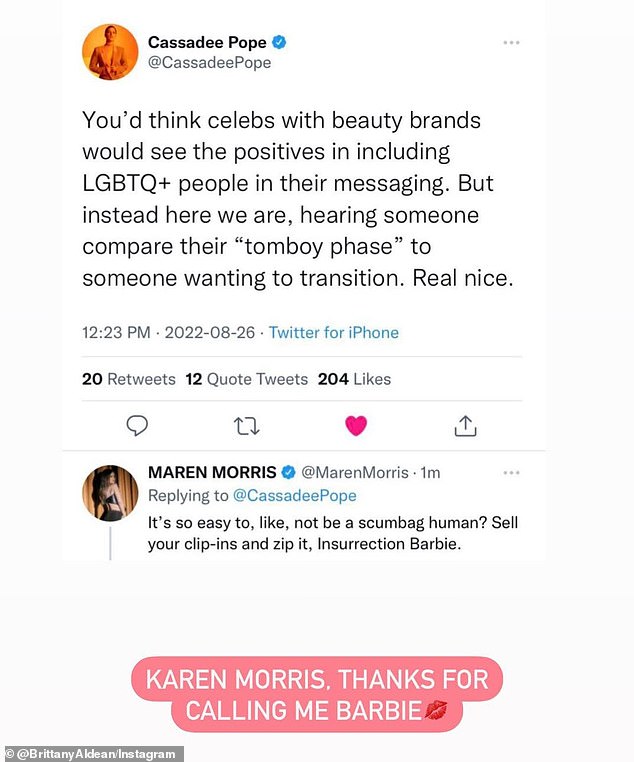 Response: The country singers had a back-and-forth online with Brittany, who was supported by her husband Jason

‘Some parents want to be accepted by society so badly that they’re willing to make life-altering decisions for their children who aren’t old enough to fully comprehend the consequences of their actions,’ she wrote.

Another of her posts questioned when children under 18 should be able to take puberty blockers — which are believed to be reversible, though they may have a negative effect on bone density — or to undergo gender reassignment surgery.

Another questioned whether children younger than 18 should be able to choose to take puberty blockers, or undergo gender reassignment surgery.

Brittany’s husband Jason expressed support for her throughout the back-and-forth, which eventually led his publicity firm to drop him as a client. 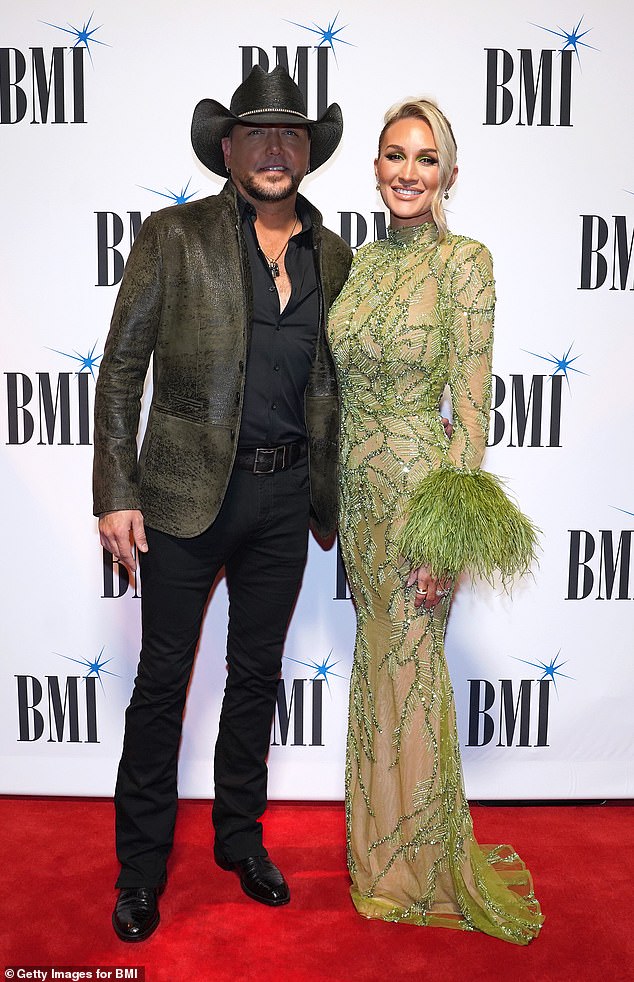 Parting ways: Aldean was later dropped by his publicity firm over his wife’s comments, which implied that trans people are only going through a phase comparable to her tomboy phase as a child; seen November 8 in Nashville