‘Always a worry when they’ve got to use a Sharpie so they know which one to do!’ Jason Manford laughs off pre-op nerves as he shares hilarious post ahead of double ankle surgery

Comedian Jason Manford kept himself distracted on Wednesday ahead of his ankle operation by cracking his usual jokes.

‘Always a worry when they’ve gotta use a sharpie so they know which one to do! I’m having both! I almost asked him to write ‘not these’ on my knees!’ he quipped.

Laughing it off: Comedian Jason Manford kept himself distracted on Wednesday ahead of his ankle operation by cracking his usual jokes

Comedian Alex Brooker commented on the post. Alex, was born with hand and arm deformities and a twisted right leg which had to be amputated when he was a baby. He now wears a prosthetic leg.

He wrote: ‘The old arrow on the foot. I remember it well. Anyway, all worked out for me, so sure you’ll be fine!’

The Manchester comic didn’t confirm exactly what he was getting done, even joking he was ‘getting my t*ts done’ in response to one fan.

Jason also snapped a selfie from his hospital bed, the TV screen in the background, with him on it, appearing on BBC One show Unbeatable.

He captioned the snap: ‘Surreal moment while I’m waiting for my ankles operation! #

‘Glad there’s some #Unbeatable entertainment on @BBCOne keeping me company!’ 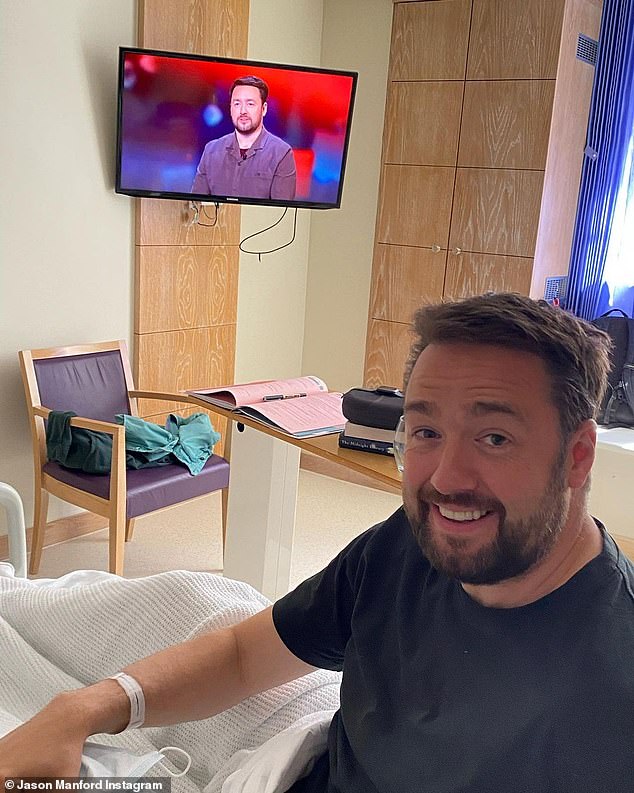 Self-entertainment: Jason kept himself distracted on Wednesday ahead of his ankle operation by watching himself on TV from his hospital bed

Jason is a father to six children, and recently revealed that his ‘under-privileged’ upbringing ensures that he keeps his four daughters and two sons grounded.

Speaking on Dave Berry’s podcast, Dadpod on Tuesday, the comedian opened up about his humble roots.

Jason has four children with first wife Catherine who he split with in 2013. They share 14-year-old twin girls, a nine-year-old daughter and seven-year-old son. The comedian then married TV producer Lucy Dyke in 2017 and they have a daughter, five, and a baby son.

Discussing his own experiences growing up , Jason explained: ‘I struggled, and I had a tough childhood… I had an under-privileged childhood. 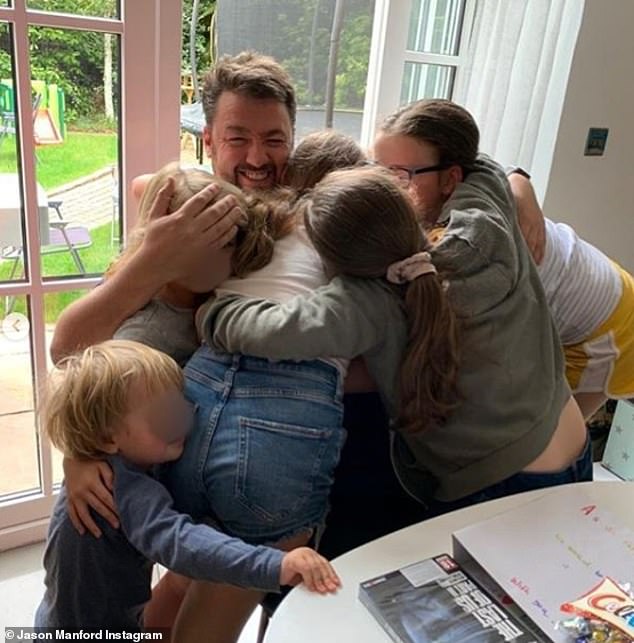 Doting dad: Jason has four children with first wife Catherine, twin girls, 14, a daughter, nine, and a son. seven.  He has a daughter, five, and baby son with TV producer wife Lucy Dyke

‘I found out later because at the time, I didn’t know. I just, I had nothing to compare it against and I just spent my childhood laughing and having a good time and playing.

‘I didn’t really notice it. But my kids obviously have got all these opportunities and I think I’m a bit pushy when it comes to certain things… ‘

He shared a story about a time he drove around his childhood neighbourhood with his kids to show them where he came from but it wasn’t the nostalgic moment he had planned. 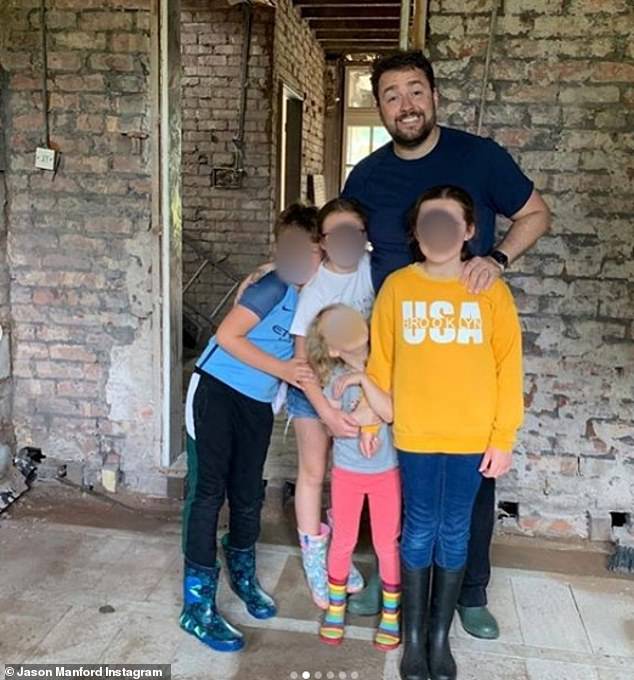 Candid: The father-of-six also revealed he has been using a cleaner for years and admitted his worst moment as a parent came when his kids became too reliant on her

‘I was like driving down my old road, my old council estate road and I was about to tell ’em oh this is where Daddy grew up.’

‘And there was a moment where my daughter locks the door in the back of the car. I was like, what are you doing, and she went, ”oh it looks a bit rough round here, Daddy.” I was like, this is where I’m from you cheeky git’.’

Absolute Radio host Dave Berry’s Dadpod is now in season 3, it follows the presenter seeking out parenting advice from a different celebrity guest each week.

It is available to stream on all mainstream podcast providers including the Absolute Radio app.