Jason Momoa has more than lived up to his superhero role and stature.

The larger-than-life actor revealed that he fights a real-life 900-pound Kodiak brown bear in an episode of his new Apple TV Plus series, See.

So what did the always enthusiastic daredevil do as a follow-up? He let that same massive bear eat a cookie from his mouth and then shared the video on Instagram.

Superhero! Jason Momoa, 40, let a 900-pound Kodiak brown bear eat a cookie from his mouth in a new daring video he posted on Instagram

In the quick clip, which was shot inside the animal’s pen, Momoa was handed an Oreo cookie and then he crouched down and put it in his mouth.

The Aquaman star uttered ‘alright’ right before the animal’s trainer told him the bear would come in ‘quick.’

Just as he said those words the animal did in fact come in and go face-on-face with Momoa when he took the cookie and ate it.

Momoa’s reaction was priceless. He busted out into laughter and quickly wiped away the saliva the animal left on his face. 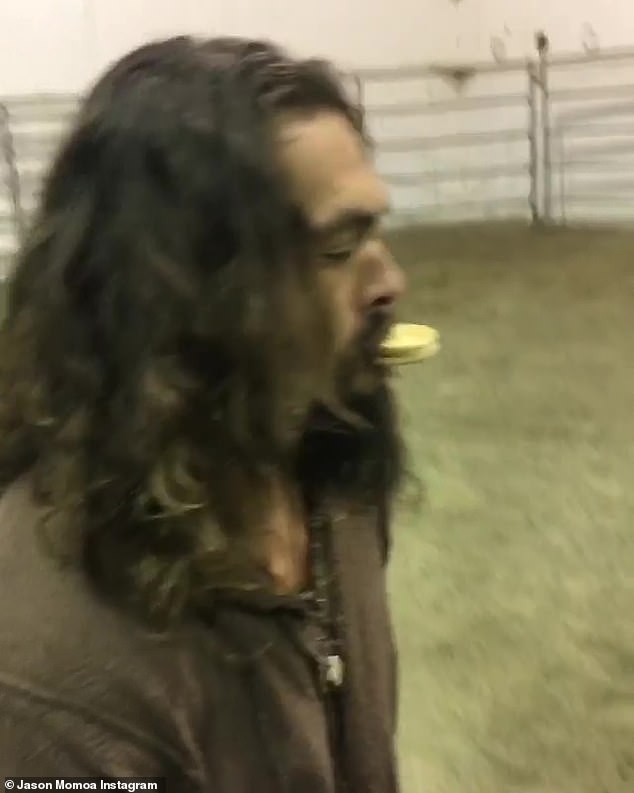 Daring! In the quick clip, which was shot inside the animal’s pen, Momoa was handed an Oreo cookie and then he crouched down and put it in his mouth 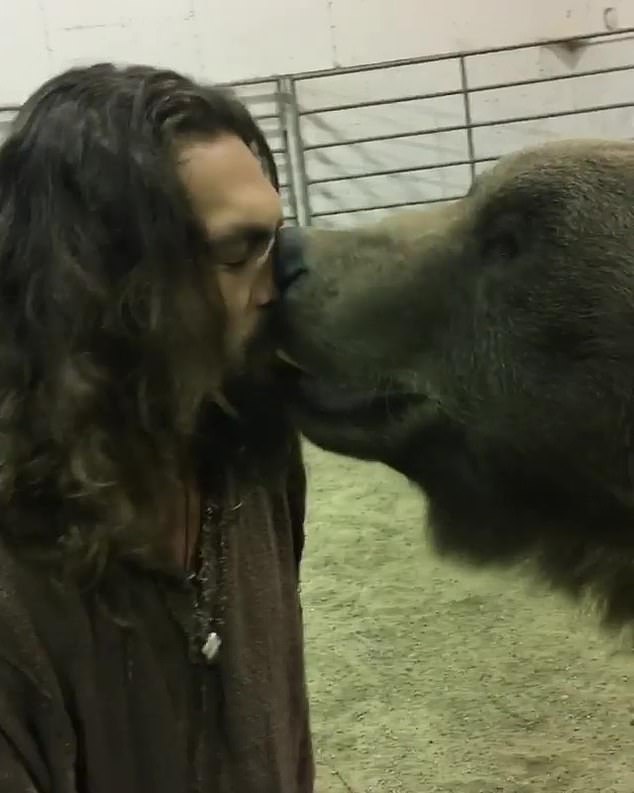 ‘The things we do for our ART,’ the Hawaiian star began in the caption of the daring video.

‘SEE. Is out. Please watch on Apple TV+. The bear needs to know your scent. So here’s my cookie kisses big guy.’

He ended with: ‘Love you tag. Aloha Baba Voss,’ in reference to Tag The Bear and his character’s name in See. 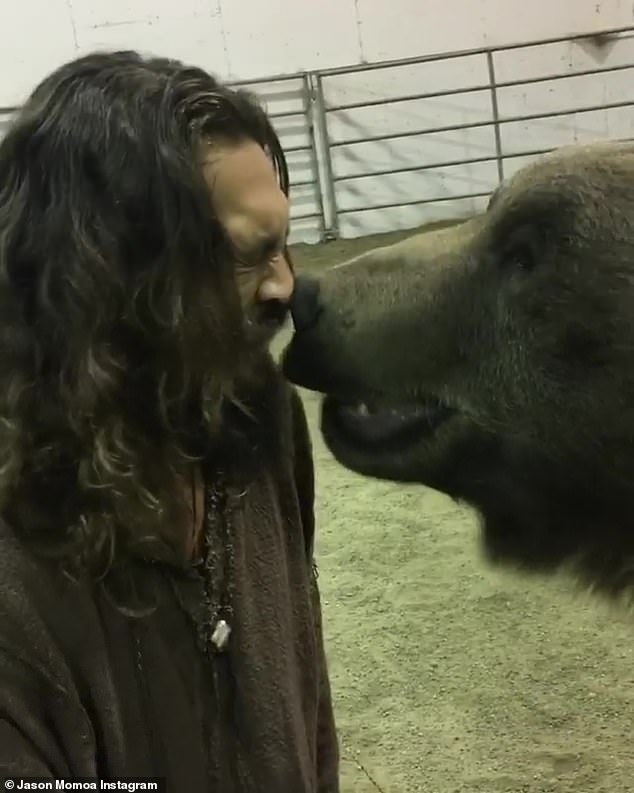 Priceless: Momoa busted out into laughter after the bear took the cookie 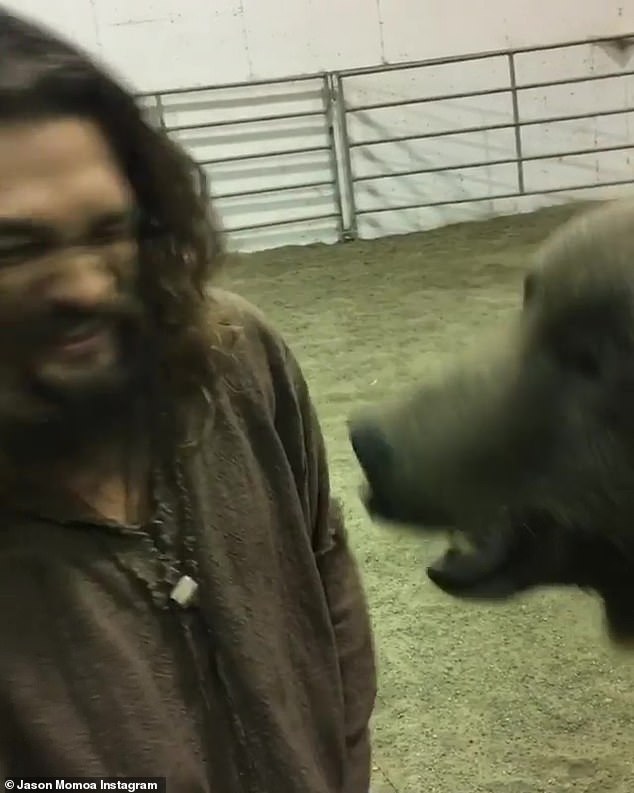 Confession: ‘The things we do for our ART,’ the Hawaiian star wrote in the caption of the video

In a recent interview on The Ellen DeGeneres Show, Momoa explained how his character, who’s supposed to be blind, fought Tag The Bear for episode two of See.

‘There’s no CGI on that one. That’s officially a 900 pound bear,’ he confessed.

‘It has to get to know you,’ he explained to Ellen.

He had no hesitancy admitting that he was scared to do the stunts with the bears, but that the trainer assured him ‘it’s going to be ok. So you just trust the trainer.’

He then joked about what a headline would look like if ‘Jason Momoa died today. He got his face ripped off by a bear. How? He had a cookie in his mouth. I mean it doesn’t make any sense.’ 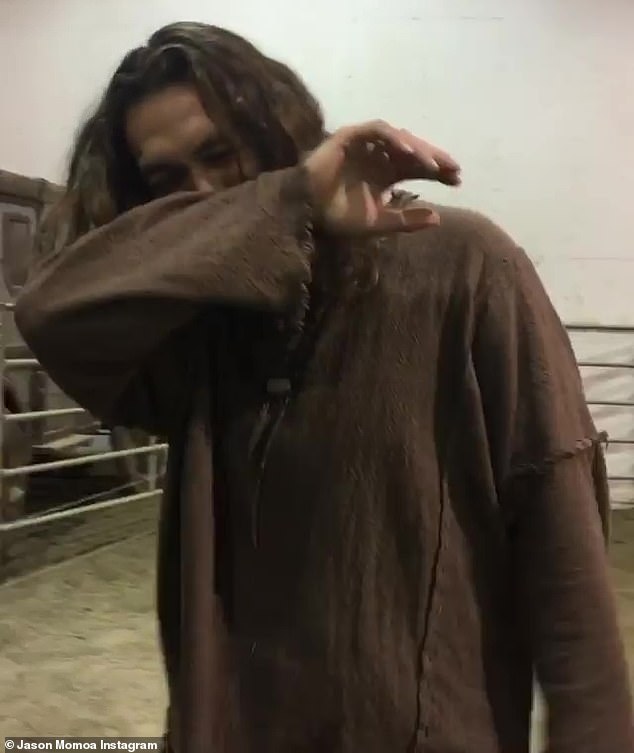 Sloppy: While laughing, Momoa wiped away the saliva the animal left on his face

See is set 100 years in the future, after a deadly virus has killed off a good chunk of humankind and blinded the rest.

Momoa’s Baba Voss is the father of twins who are born with sight, a sense that is considered mythical and dangerous in this post-apocalyptic world.

The new Apple TV Plus series debuted on the streaming service when it launched on November 1. 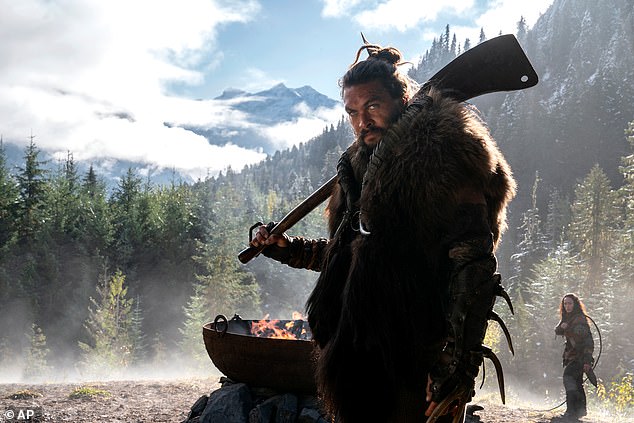 Available now: The new Apple TV Plus, See, series debuted on the streaming service when it launched on Friday, November 1