Who needs the Hundred? Certainly, a packed and pulsating Old Trafford could not have been treated to any more thrills and spills than this as cricket’s grand old short format served up a dramatic win for England in their Twenty20 decider against Pakistan.

As the strains of Sweet Caroline – far too old a song to be played in cricket’s brave new world at the Oval tonight – rang out among 21,000 spectators, Chris Jordan and David Willey scrambled England home by three wickets with two balls to spare.

It gave them their fourth, and most hard-fought, white-ball series triumph this season out of four on a memorable night. But it was a mighty close run thing. 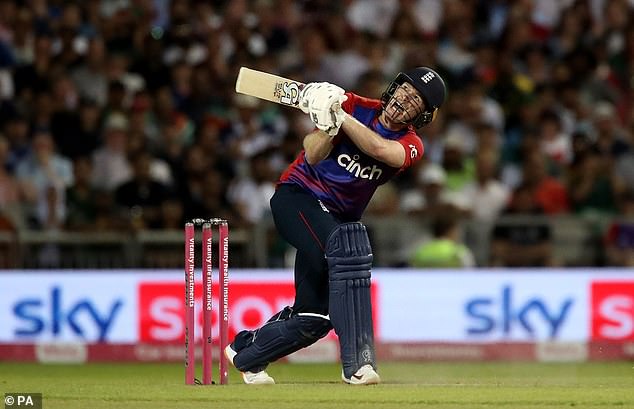 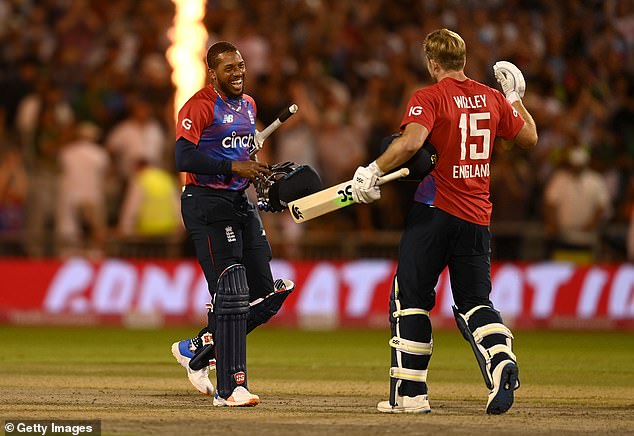 What a game this was and how Babar Azam will regret bringing back his fastest bowler in Hasan Ali for the 18thover on a night dominated by spin just when it seemed England were going to throw this match away.

At that stage England needed 29 off 18 balls to overcome Pakistan’s 154 for six on the type of slow, turning pitch that will be typical of the World Cup in the UAE in October and the masses of Pakistan supporters at Old Trafford sensed a surprise victory.

But Morgan, as calm and collected as ever on his return to the side, smashed Hasan for two sixes into the giant party stand to calm the nerves of his under-par team. 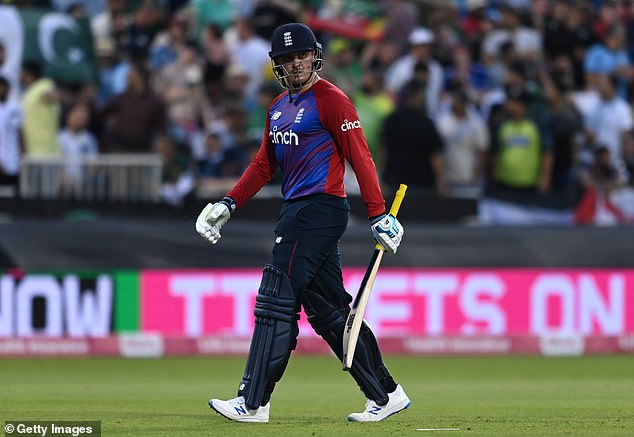 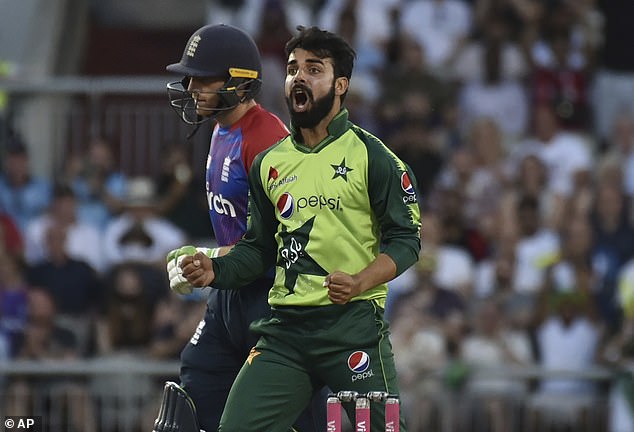 Even then the game was not over as Dawid Malan, struggling to keep up with England’s big hitters, fell and then the new big hitting kid on the block in Liam Livingstone followed him after smashing his first ball for six and trying to end the match off his second but slicing to short third man.

When Morgan also departed with four still needed a Super Over was looming, but Jordan kept his head to shovel two twos on the leg side off Hasan and England’s last T20 job before they name their provisional World Cup squad in September was done.

‘This means a huge amount,’ said Morgan afterwards. ‘It was the worst possible wicket for our game-plan so we’ve managed to win against a very good side and will learn a lot from that.’

England left out Matt Parkinson on his home ground but were still spin heavy as they replicated the policy that served them well when they levelled this series at Headingley without Morgan on Sunday. 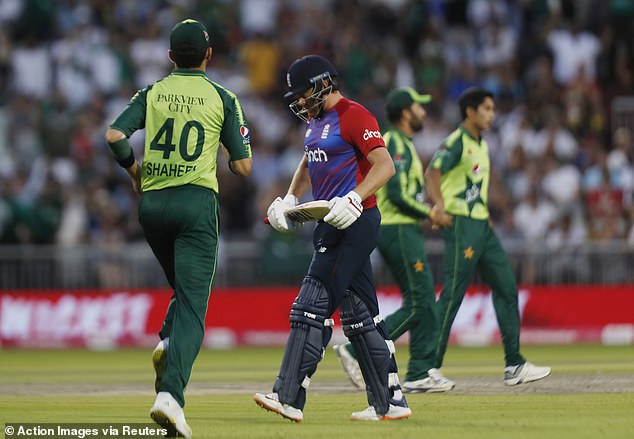 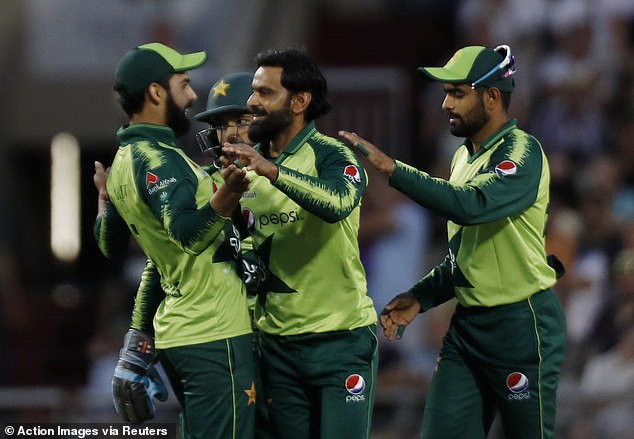 At the centre of that was Adil Rashid, at the peak of his powers as England’s most important T20 bowler and now, surprisingly, taking his first four-wicket short-form haul.

Livingstone was also at the centre of the action again even before his brief but memorable innings with another demonstration of the versatility that sees him threatening right-handers with leg-spin and left-handers with off-spin.

He may not have taken a wicket but the Cumbrian has timed his run perfectly to become undroppable from that World Cup squad and, almost certainly, the first-choice side.

But the most pleasing bowling display for England came in the form of Moeen Ali, who has clearly arrested the decline that threatened to see him drift away from the squad. 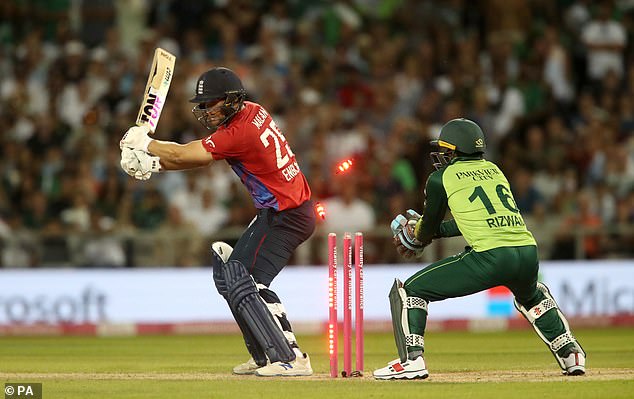 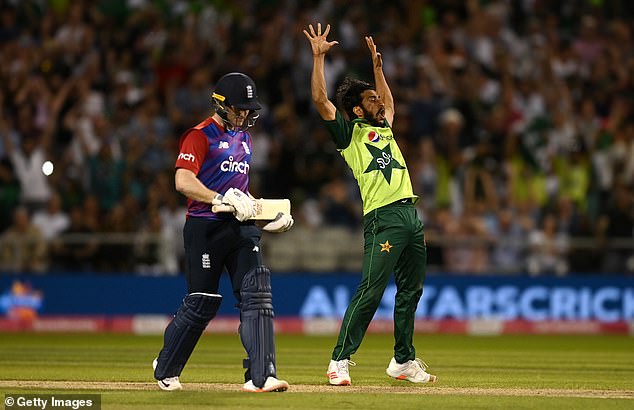 Moeen was the player of the match at Leeds and, imbued with the confidence that a contribution with both bat and ball in a winning cause can bring, he was superb in conceding just 19 runs from his four overs and claimed the wicket of Fakhar Zaman.

Only opener Mohammad Rizwan held Pakistan together but he could face only 57 of the 120 balls delivered while he was at the crease in carrying his bat for 76.

A target of 155 is usually well within England’s reach but the fact Morgan unusually wanted to bat first emphasised that, on this pitch, it would be no routine chase.

Jos Buttler struggled for fluency and the only time he looked like his usual self was when he switched to a left-handed stance and smashed Usman Qadir, son of the legendary Abdul, for four.

Jason Roy, in contrast, was in sublime touch on such a tired surface and rushed to 50 off just 30 balls, also switch hitting leg-spinner Qadir to the boundary in his first over. 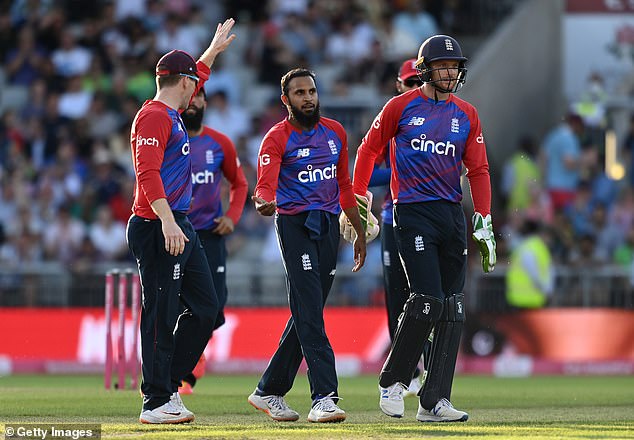 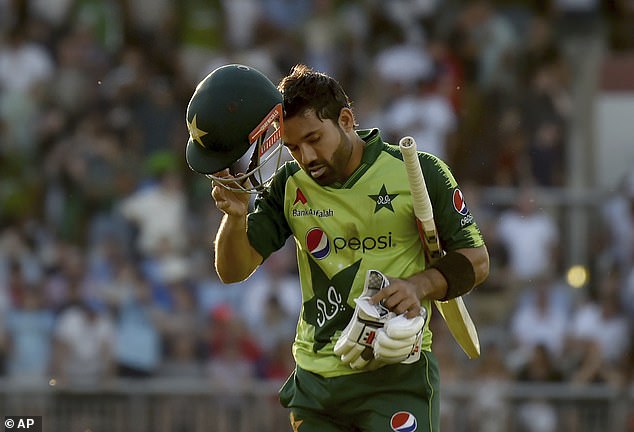 ‘I just went out and had a bit of fun against the new ball,’ said Roy. ‘Pakistan came out firing and the crowd were outstanding tonight. We are all delighted.’

But when Roy, Jonny Bairstow and Moeen all fell trying to hit over the top England were 112 for four after 15 overs and the game was very much on.

How Malan could have done with taking England home but just when it seemed the job was done and 12 were needed off nine balls he was bowled by Mohammad Hafeez for 31 off 33 balls. He is very much under pressure again now from Livingstone.

But this was a pleasing way for England to win yet another white-ball series, their only problem now being who to leave out when they finalise that World Cup squad, with Ben Stokes, Jofra Archer, Mark Wood and Sam Curran all due to return. 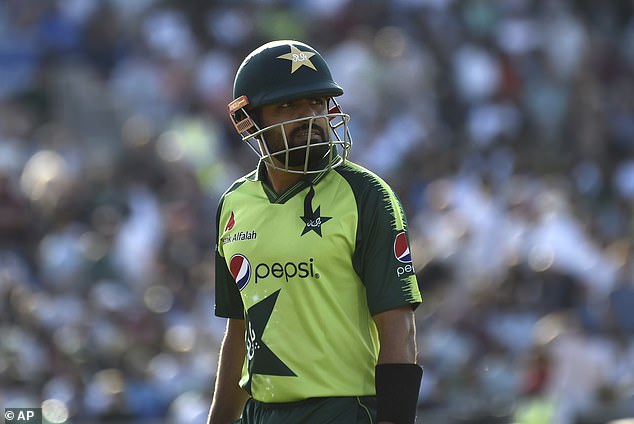 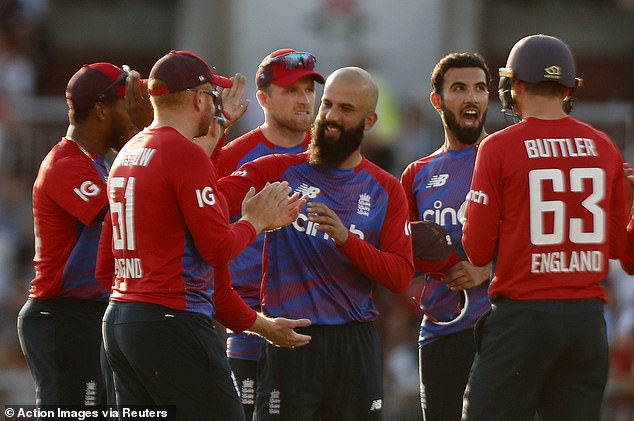