Stunning new asteroid impact simulations using a high-powered projectile cannon have revealed new insight on the processes that may have transported water to Earth billions of years ago.

And, they found a surprising amount of water survived the impacts.

The findings could explain how asteroids deliver water throughout the solar system, helping to account for traces of water spotted on the moon and other planetary bodies.

The study used a dry material made of pumice powder as the target material, which was subjected to impacts with projectiles traveling 5 km per second (more than 11,000 mph). The experiments were conducted at the Vertical Gun Range at the NASA Ames Research Center

‘The origin and transportation of water and volatiles is one of the big questions in planetary science,’ said Terik Daly, a postdoctoral researcher at Johns Hopkins University who led the research while completing his PhD at Brown University.

‘These experiments reveal a mechanism by which asteroids could deliver water to moons, planets, and other asteroids.

‘It’s a process that started while the solar system was forming and continues to operate today.’

To simulate the carbonaceous chondrites – or chunks of ancient asteroids that may have transported water – the researchers used marble-sized projectiles of a similar composition.

Then, they fired them off at the Vertical Gun Range at the NASA Ames Research Center.

The study used a dry material made of pumice powder as the target material, which was subjected to impacts with projectiles traveling 5 kilometers per second (more than 11,000 miles per hour).

While earlier models have suggested that all of the water would be lost in such a collision, the simulations suggest this may not be the case.

In the study, researchers blasted marble-size projectiles designed to mimic ancient, water-rich asteroids at dry targets, hitting staggering speeds of around 11,000 miles per hour. Samples of impact glasses created during an impact experiment are shown 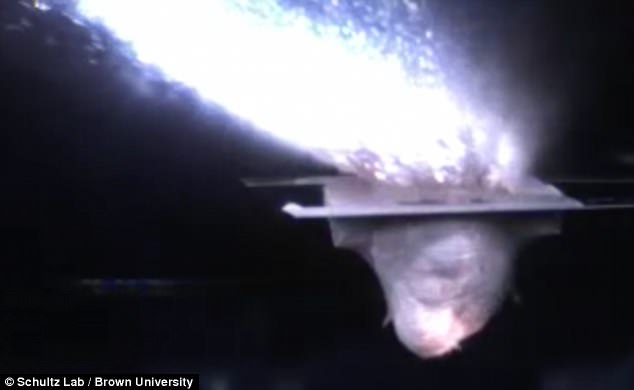 The findings could explain how asteroids deliver water throughout the solar system, helping to account for traces of water spotted on the moon and other planetary bodies

‘Impact models tell us that impactors should completely devolatize at many of the impact speeds common in the solar system, meaning all the water they contain just boils off in the heat of the impact,’ said Pete Schulz, co-author of the paper and a professor in Brown’s Department of Earth, Environmental and Planetary Sciences.

‘But nature has a tendency to be more interesting than our models, which is why we need to do experiments.’

The simulations show water may have been retained in a plume formed by the impact.

While parts of the impactor itself would have been destroyed, the resulting vapor plume containing water and other materials would remain.

WAS MARS EVER HOME TO LIQUID WATER?

Evidence of water on Mars dates back to the Mariner 9 mission, which arrived in 1971. It revealed clues of water erosion in river beds and canyons as well as weather fronts and fogs.

Viking orbiters that followed caused a revolution in our ideas about water on Mars by showing how floods broke through dams and carved deep valleys.

Mars is currently in the middle of an ice age, and before this study, scientists believed liquid water could not exist on its surface.

In June 2013, Curiosity found powerful evidence that water good enough to drink once flowed on Mars.

In September of the same year, the first scoop of soil analysed by Curiosity revealed that fine materials on the surface of the planet contain two per cent water by weight.

Last month, scientists provided the best estimates for water on Mars, claiming it once had more liquid H2) than the Arctic Ocean – and the planet kept these oceans for more than 1.5 billion years.

‘The impact melt and breccias are forming inside that plume,’ said Schultz.

‘What we’re suggesting is that the water vapor gets ingested into the melts and breccias as they form.

‘So even though the impactor loses its water, some of it is recaptured as the melt rapidly quenches.’

As carbonaceous asteroids are considered to be among the earliest objects in the solar system, the findings could help to explain how water arrived to Earth and other objects.

Water in the moon’s mantle, for example, may have been of asteroid origin.

‘The point is that this gives us a mechanism for how water can stick around after these asteroid impacts,’ Schultz said.

‘And it shows why experiments are so important because this is something that models have missed.’