Hawaii’s Kilauea volcano has been erupting for more than three weeks, smothering 82 homes and coating more than 2,200 hectares in molten lava.

The extent of the destruction can be seen from space, with incredible satellite imagery showing glowing streams of lava flow from the volcano into residential areas nearby.

One image, taken during the daytime by the European Space Agency’s Earth Observation satellite, shows the bright orange and red lines streaming from Kilauea towards the ocean.

A similar picture taken at night by NASA shows the streams as purple, still contrasting brightly against the otherwise calm backdrop.

Hawaii’s Kilauea volcano has coated more than 2,200 hectares of land in molten lava, rendering it destroyed 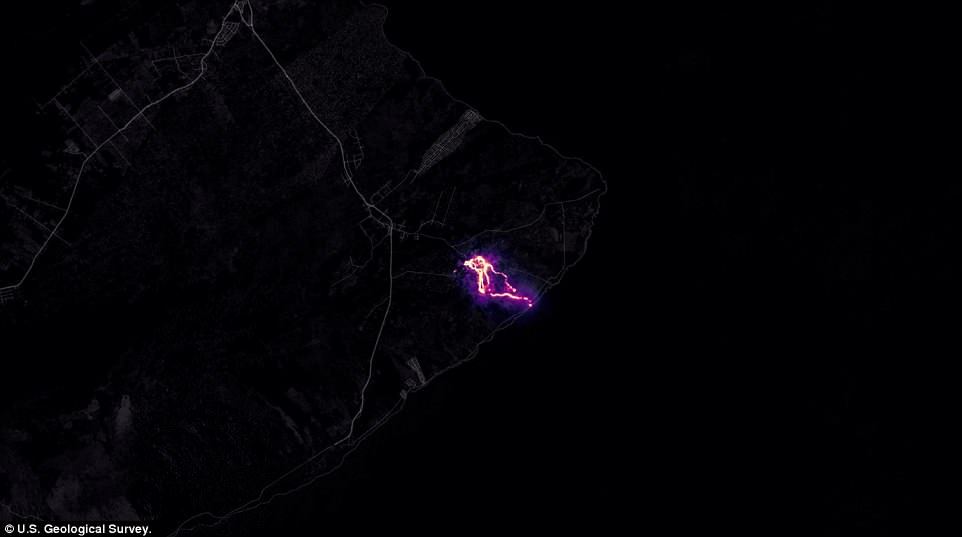 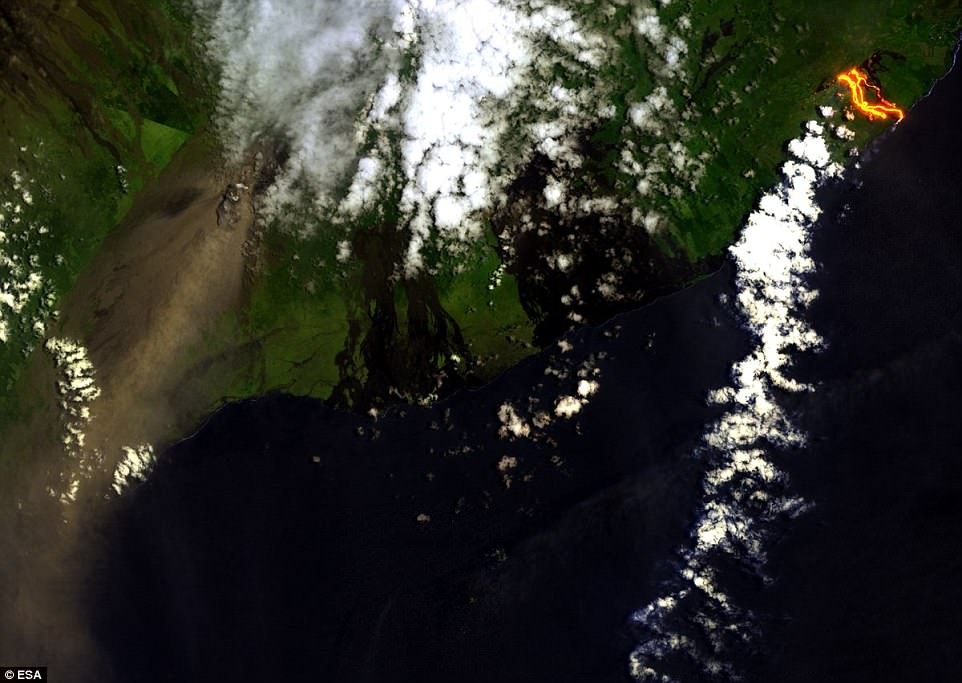 While the images show only a small part of Hawaii’s Big Island is affected, for residents, the scenes are apocalyptic 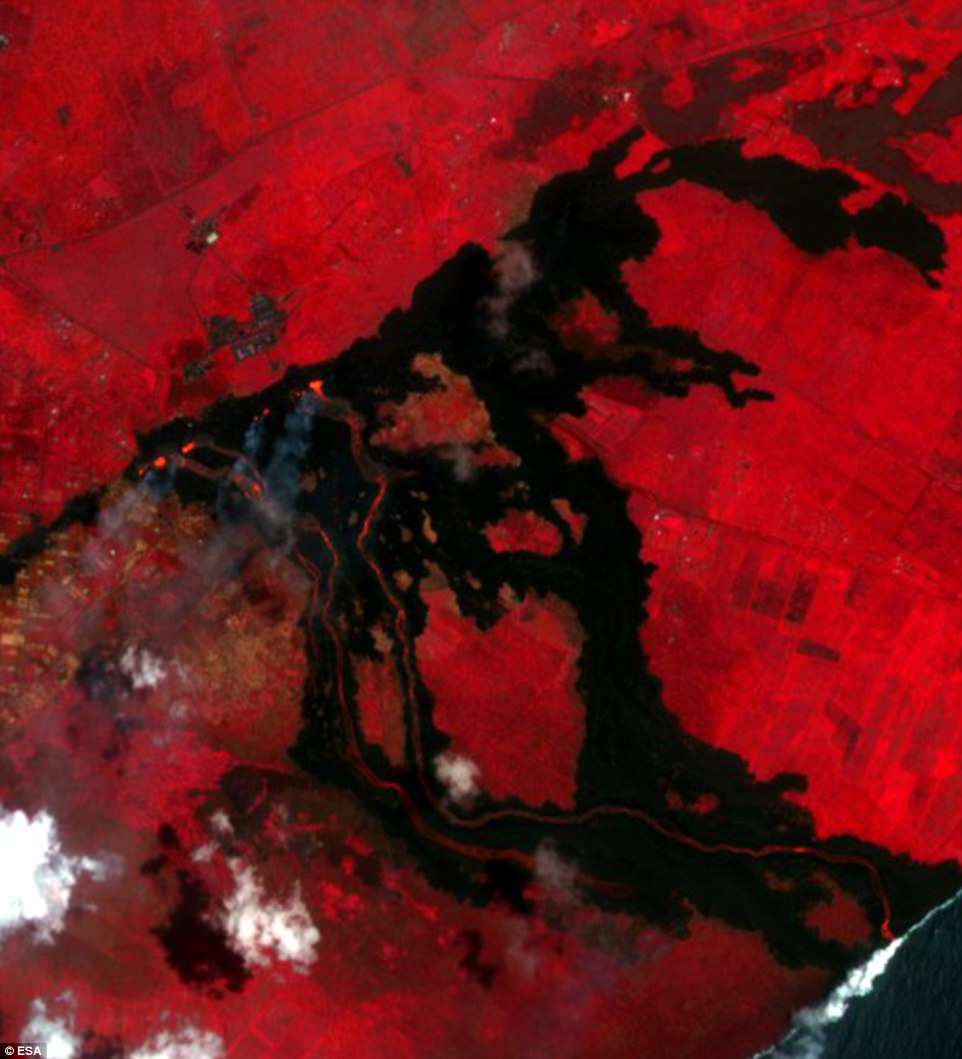 Another closer image shows the more than 2,200 hectares of land destroyed by Kilauea

In comparison with all of Hawaii’s Big Island, the lava streams appear small, but they’re creating devastating scenes for people who call the volcano and its surrounds home.

Roads have been cut off, an estimated 2,000 residents have been evacuated by road and by air, and as the lava continues to spill, some of it hitting the ocean, the air is becoming more toxic to breathe.

As the area heads into the fourth week of eruptions,another 2,000 people living in coastal communities may be forced to flee as lava flows threaten to cut off their escape routes.

Explosions early on Saturday morning pushed ash clouds up to 11,000 feet above sea level, and the US Geological Survey says additional explosions are possible at any time.

A list of hazards published by the USGS suggests potentially lethal concentrations of sulfur dioxide gas could be present within a one kilometer radius downwind of the vent areas, and explosive blasts in active areas are could see massive pieces of debris and lava bombs go flying.

‘Explosive eruptions in the summit lava lake can throw fragments of rock and molten lava up to six and a half feet in diameter on to the rim of Halema‘uma‘u Crater, an area that has been closed to the public since early 2008 due to volcanic hazards,’ the warning read. 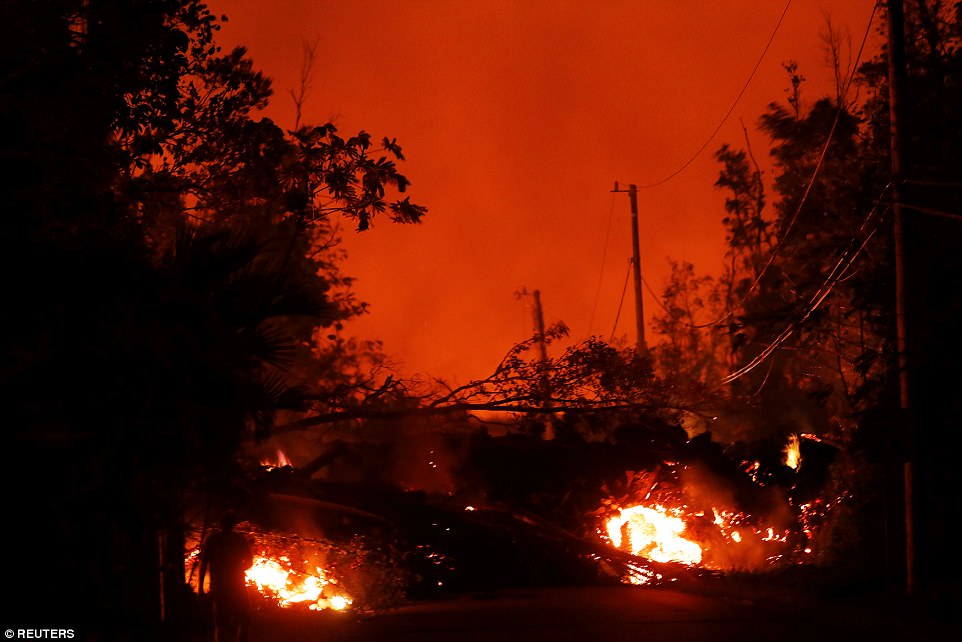 Lava has blocked off roads (pictured), reducing options for residents still in the area and forcing officials to prepare backup plans for evacuations 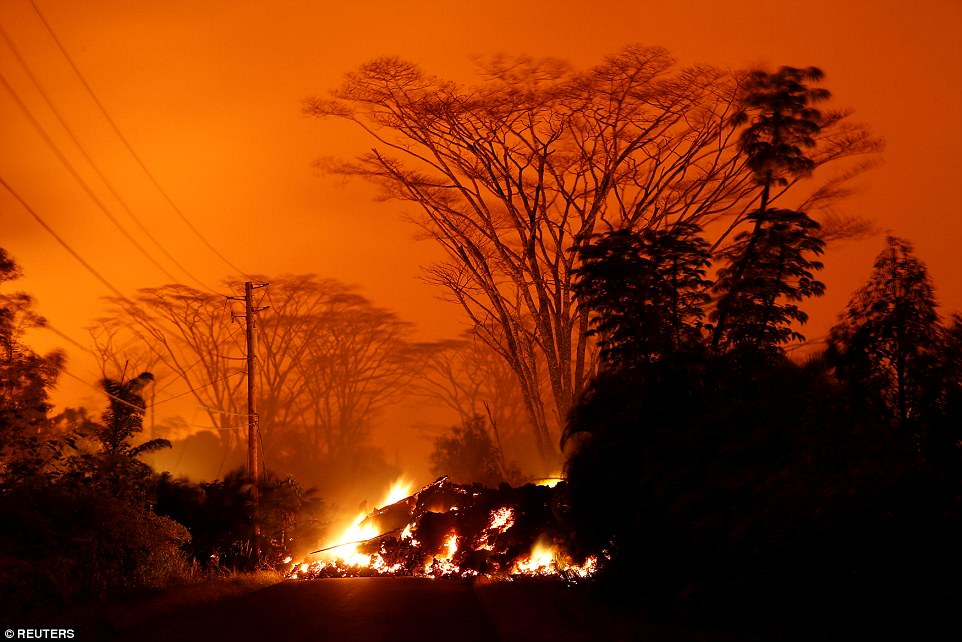 US Marines Corps helicopters are standing by to evacuate communities in the event that State Highway 130, their last exit, becomes blocked 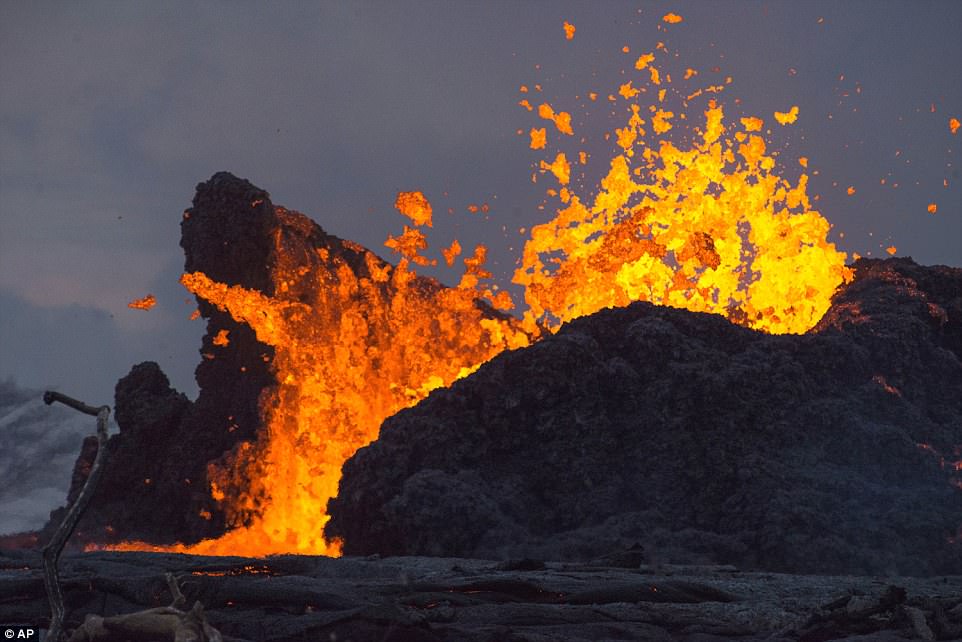 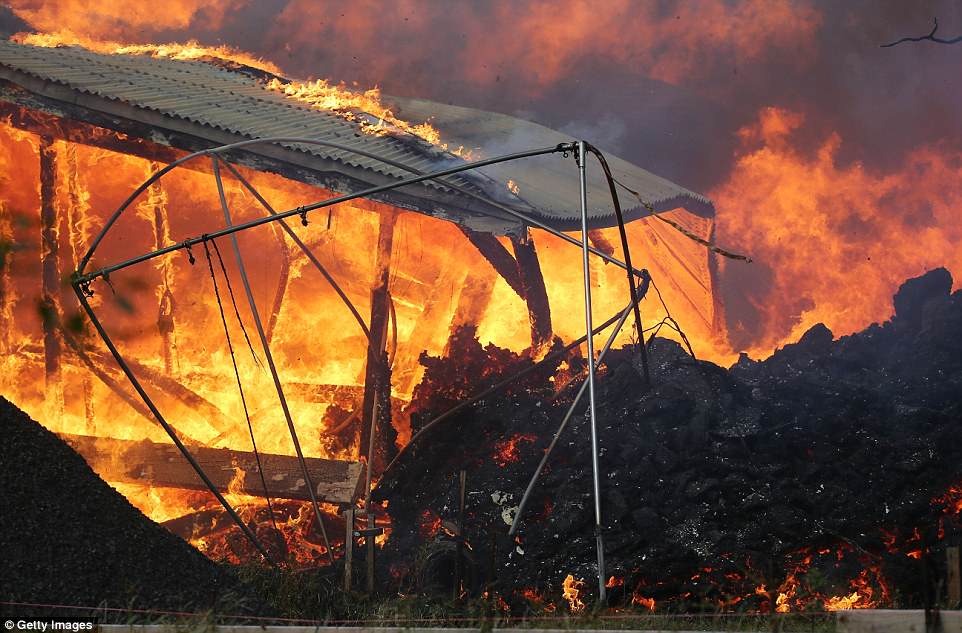 At least 82 homes have been destroyed by the lava (pictured) which has consumed properties and their contents entirely, leaving residents with nothing 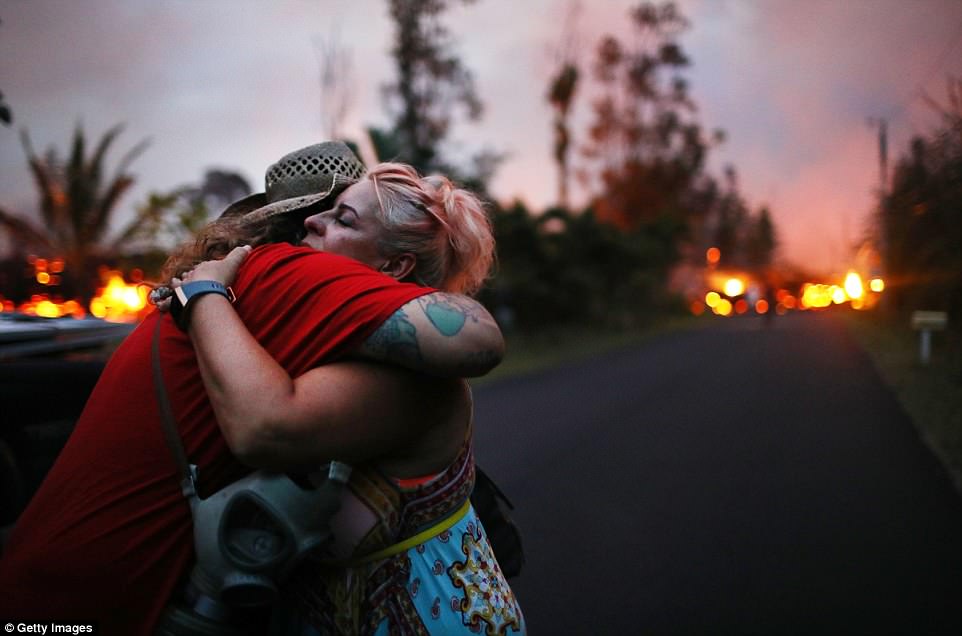 As the lava continues to flow into the ocean, it is forming laze, which is where the lava evaporates large quantities of sea water at once, sending toxic fumes and glass particles into the air.

‘Laze is formed when lava enters the ocean. The interaction sends hydrochloric acid and steam with fine glass particles into the air,’ the USGS explains.

‘Laze drifts with the wind and can be a health hazard for people in the immediate vicinity of the plume, but it dissipates quickly downwind. Laze is irritating to the lungs, eyes and skin.’

It isn’t just those close by the volcano who are at risk though.

Homes, schools and entire towns more than 20 miles away from Kilauea have turned completely gray and residents are struggling to breathe as winds drive the ash further around Big Island.

Kau High and Pahala Elementary School have been inundated with gritty, gray ash that has been spewing out of the volcano some 20 miles away.

During intermittent explosions at Kilauea’s summit, including one late on Thursday, ash shoots high into the sky and drifts down onto the small, rural campus and nearby areas.

Locals have begun wearing masks to help filter out the ash, but some say the grit within the ash is scratching their skin.

There is so far no indication of when Kilauea will stop erupting, and scientists say there is no way to speed up the process.

But geologists said on Thursday, after three weeks of escalating activity, Kilauea had entered a ‘steady state’ of eruption.

‘It’s probably going to do this for a little while longer,’ USGS scientist Wendy Stovall said during a conference call, describing the stage of the eruption as the ‘middle’. 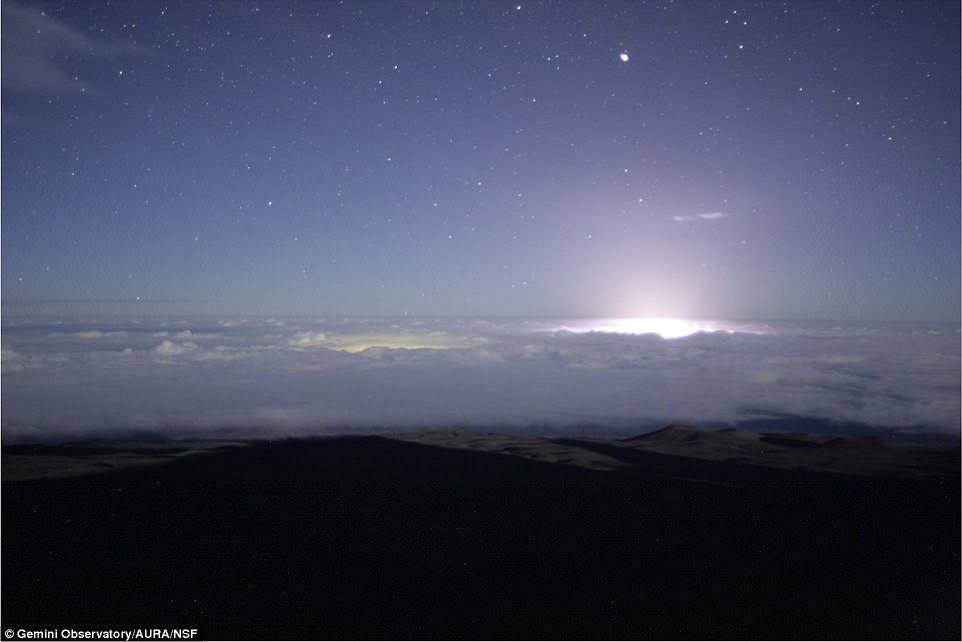 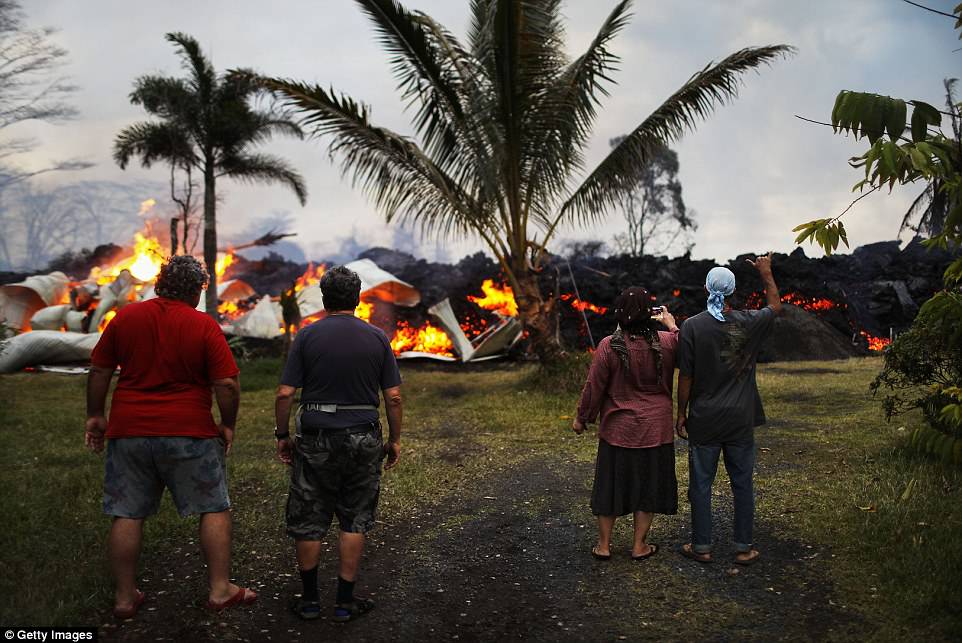 As the lava continues to pour into the community, residents can do nothing but watch as their homes are destroyed 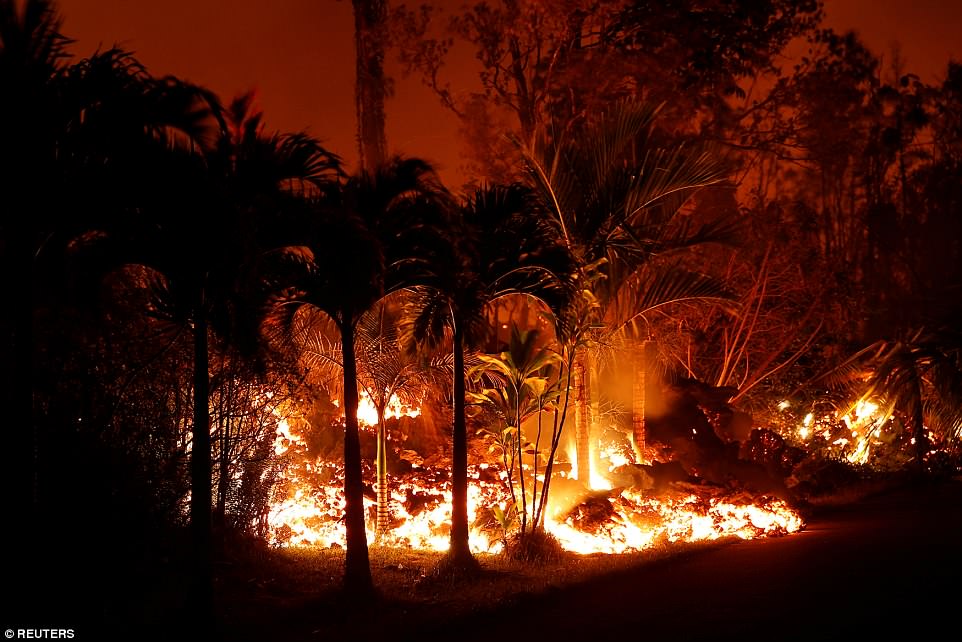 Scientists have not been able to estimate when the eruptions will end, but estimate Kilauea would continue to blow for a little while longer