The alleged killer-kidnapper accused of holding 13-year-old Jayme Closs prisoner and slaughtering her parents has been branded a ‘scumbag’ – by his ‘first and last’ girlfriend.

Warped Jake Patterson, 21, dated the ‘shy, geeky’ girl in ninth grade but became so embittered when they broke up he allegedly slashed the tires on her mom’s car.

The balding introvert was never able to convince any other girls to go out with him after that, according to classmates at Northwood High School in Minong, Wisconsin.

‘They sat next to one another in math. They were both very geeky so eventually they became friendly,’ dished a source.

‘Patterson was quiet but he would lose his temper. Eventually he scared her away with his moods.

‘Someone said that when they broke up he was so angry he slashed the tires on her mom’s car. That ended whatever slim chances he had of finding another girl.’

The ex-girlfriend, 21, says she does not want anything more to do with Patterson, who is accused of shooting dead James and Denise Closs before holding their daughter prisoner at his family’s secluded woodland cabin.

Jake Patterson, the 21-year-old charged with kidnapping Jayme Closs and killing her parents, has been branded a ‘scumbag’ by his ‘first and last’ girlfriend. In a high school group photo obtained by DailyMail.com, Patterson (circled at right) can be seen sitting alone, his head buried in a book, as smiling students pose for the camera 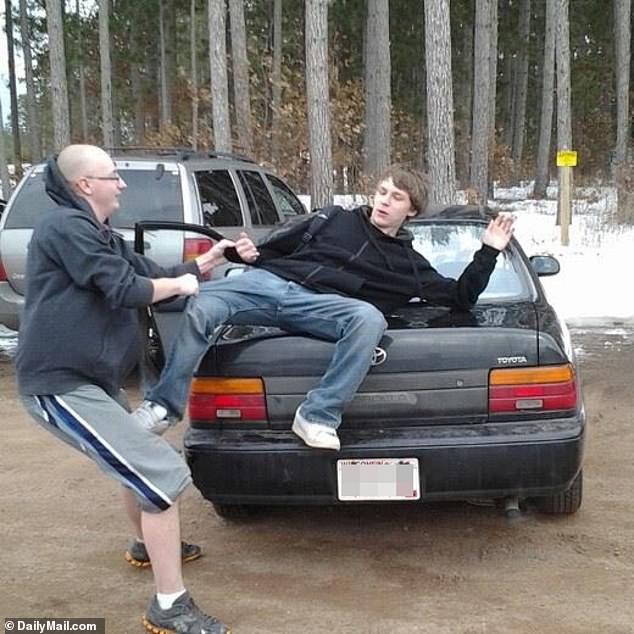 Another photo obtained by DailyMail.com, shows the twisted loner (left) play-fighting with another teen on the trunk of a Toyota sedan

‘I don’t want any ties to the scumbag – especially as his first and last girlfriend,’ she told DailyMail.com, asking for anonymity to avoid being targeted for her links to the alleged killer.

In a group photo taken in his 2015 graduation year Patterson can be seen sitting alone, his head buried in a book, as smiling students pose for the camera.

Another high school photo obtained by DailyMail.com shows the twisted loner play-fighting with another teen on the trunk of a Toyota sedan, suggesting he did have a small number of friends.

That car is still parked beside the now-deserted cabin in Gordon, which is strewn with old furniture, trash and junk cars and is where Patterson kept Jayme prisoner for 87 excruciating days.

The teen in the picture play fighting with Patterson, Dylan Fisher, told the Duluth News Tribune that there were no ‘red flags’ and that Patterson was a ‘normal’ student who loved his family and his dog Rosie.

‘Just like anybody else, you could joke with him,’ Fisher said. ‘He was a human being.’

Patterson was on the school quiz bowl team but shied away from sports after breaking his arm in an elementary school wrestling bout. 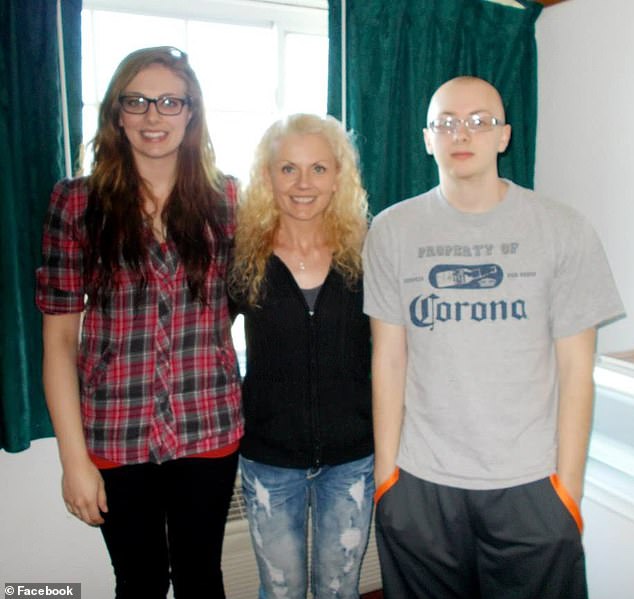 The ex-girlfriend, 21, said: ‘I don’t want any ties to the scumbag,’ asking for anonymity to avoid being targeted for her links to him. Patterson (pictured with his mother and sister in 2015) dated the girl in ninth grade but became so embittered when they broke up he allegedly slashed the tires on her mom’s car

‘He was always reading, he always had his head in a book. He was very intelligent but he didn’t apply himself,’ another former classmate told DailyMail.com.

‘He was awkward with everyone, not just girls. He made very little eye contact with anyone. 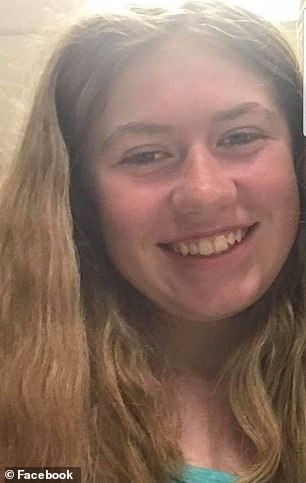 Patterson has been charged with kidnapping Jayme Closs, 13, and killer her parents

‘We knew he had a rough life. It was pretty evident he was losing his hair in high school but he was never bullied over it as far as I know.’

Former student Tristan Roberts boasted of fighting with Patterson and kicking him off the school bus.

‘Got in a fight with him on the bus once in HS should have kicked em out the emergency exit,’ he wrote on Facebook.

‘His eyes never held much of a soul. If he had someone who cared about him probably would never have happened.’

Patterson stated in his high school yearbook that he wanted to join the Marines but he was discharged after only five weeks.

A Marines spokesperson said that the brevity of his career indicated that ‘the character of his service was incongruent with Marine Corps’ expectations and standards.’

Patterson held a job at Barron’s Jennie O Turkey Factory – where Denise and James Closs worked for more than two decades – for just one day some three years ago.

But it was on first morning drive there that he first spotted Jayme on her way to school and hatched his insidious plot to snatch and imprison her.

Hours before his first court appearance Monday, the horrifying details of the Closs murders and Jayme’s abduction emerged in the 12-page criminal complaint against him. 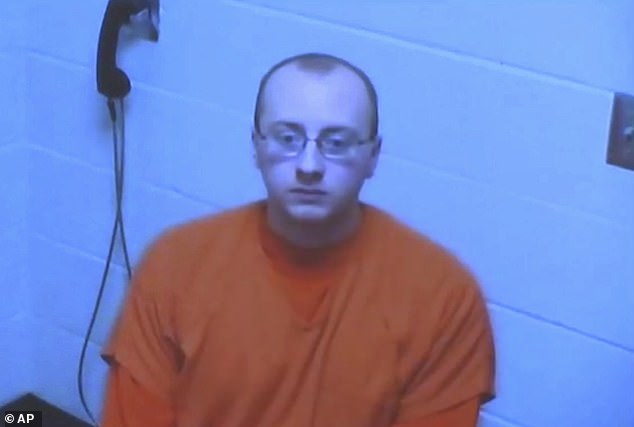 Hours before his first court appearance Monday, the horrifying details of the Closs murders and Jayme’s abduction emerged in the 12-page criminal complaint against him 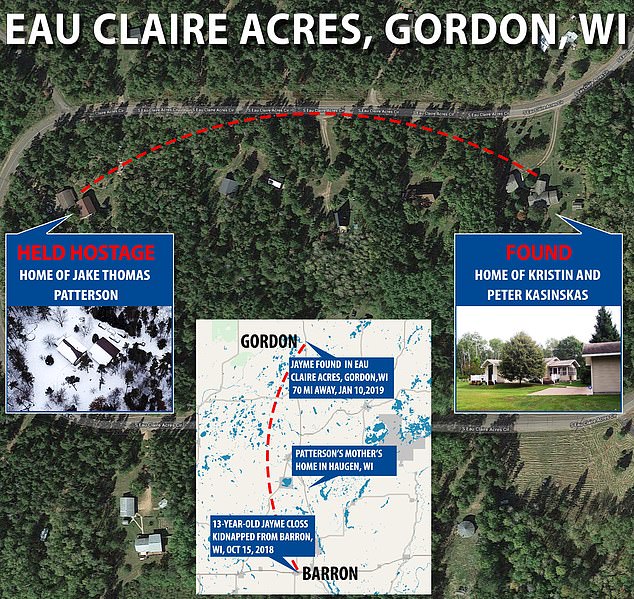 It told of how Jayme cowered in the bathroom with her mother after Patterson stormed her home in Barron, Wisconsin and shot her father in the head with a shotgun.

The petrified youngster then watched in horror as he did the same to her mother minutes after kicking in the flimsy door.

Dressed in black from head to toe including a face mask, hat and gloves, Patterson grabbed the terrified teenager, taped her hands and ankles, covered her mouth and dragged her out of her home to his waiting car.

According to Jayme, her abductor then bundled into the trunk and drove her approximately two hours to the cabin where he would hold her for the next three months until her remarkable escape last week.