Jean Claude-Juncker today furiously denied he has a drink problem.

The EU Commission President has repeatedly blamed his eccentric behaviour and unsteady walk on sciatica.

Mr Juncker, who will leave his job in July, raged when asked if he was a heavy drinker by journalists, calling them ‘stupid’.

His hi-jinks at summits and other major events where he has inappropriately kissed world leaders and ruffled the hair or pinched the bottoms of officials have made headlines around the world.

On a number of occasions he has also stumbled or had to be held up by other VIPs – but always blamed cramps, back pain or other ailments.

He said today: ‘I’ve said it many times that I do not have a problem with alcohol. Stupid journalists always ask the same question, even though this question has already been answered.’

Jean Claude-Juncker, pictured watching his wine being poured at a Brussels summit, today furiously denied he has a drink problem 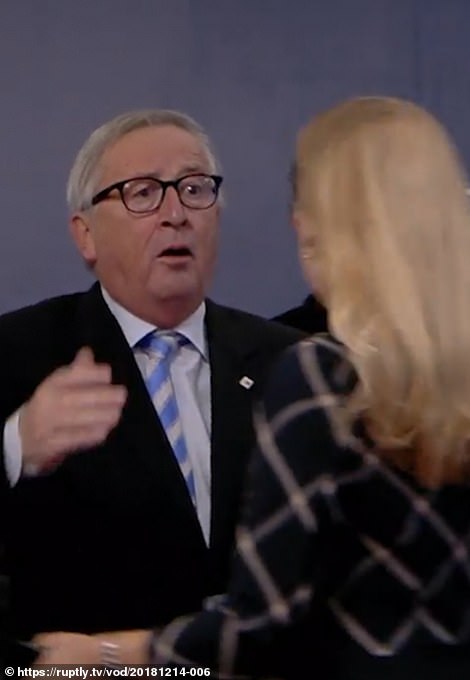 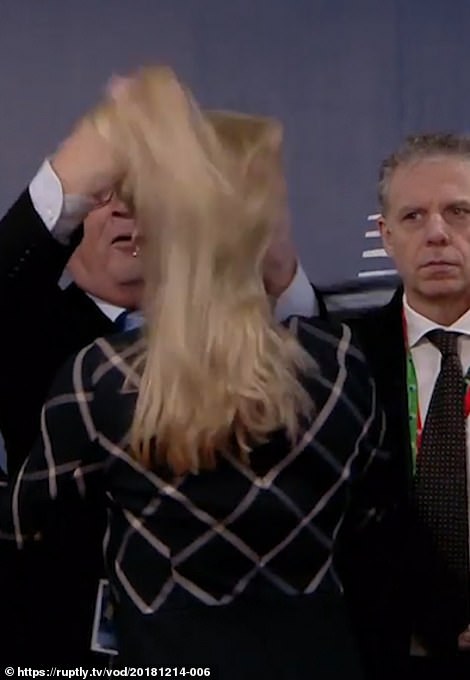 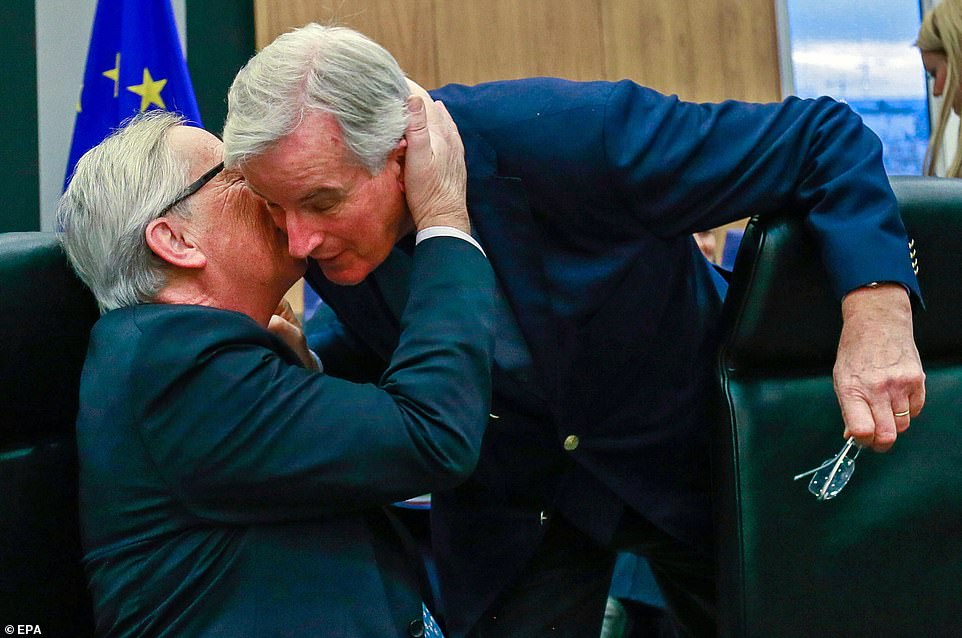 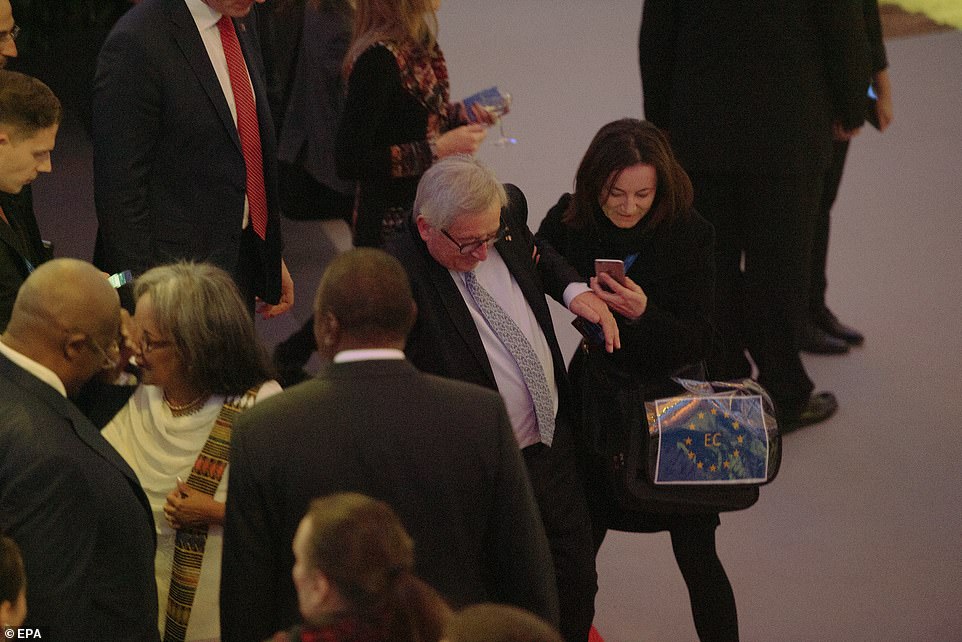 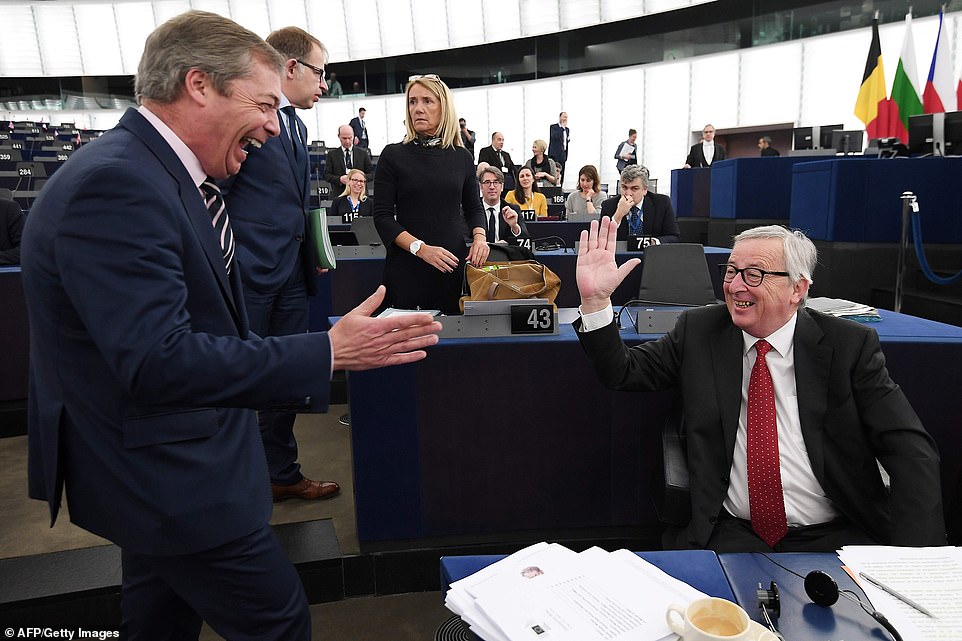 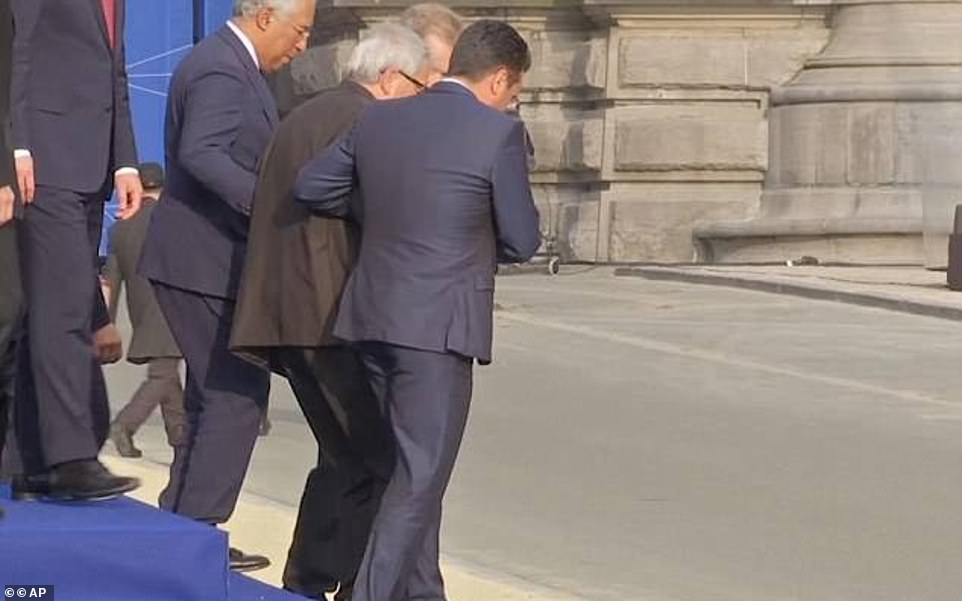 At Christmas he was once again seen struggling to navigate a small set of stairs at a key international summit today. 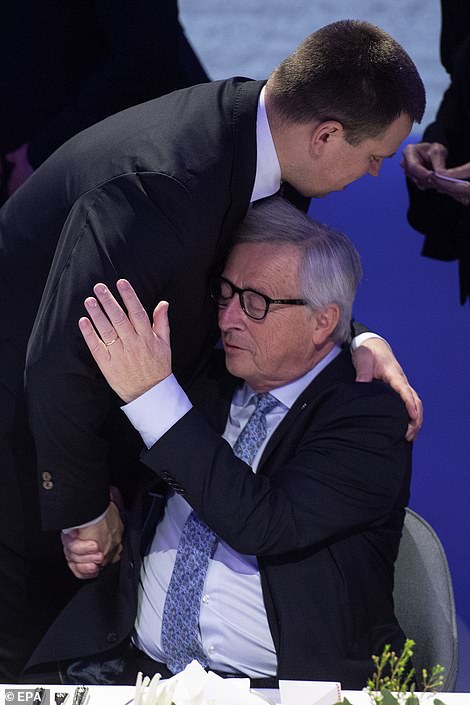 The European Commission President was photographed seemingly losing his balance and having to be held and helped by a pair of aides.

It was one of a long line of incidents critics have linked to drinking, which he says is a malicious rumour.

In July last year the outgoing European Commission President was attending a dinner at the NATO summit in Brussels attended by US President Donald Trump and a number of other world leaders.

Mr Juncker was seen stumbling and swaying to the extent that the presidents of Finland and Ukraine, among others, had to help keep him upright.

Footage from the summit also shows him struggling to make it up some steps and being held by the arm, at times by two other people.

In May 2017 he was reportedly ‘drunk and bumping into furniture’ at a UN Peace Summit during critical talks.

Mr Juncker was said to be ‘very visibly p**ed’ during talks over Cyprus, which has been split between Greece and Turkey for decades, in Geneva in May 2017.

A diplomat also said that the 62-year-old’s familiar behaviour with some young aides was ’embarrassing’.

A source said: ‘He was bumping around into things, and going up to junior members of staff for conversations. It was odd behaviour, and a little bit embarrassing for everyone’. 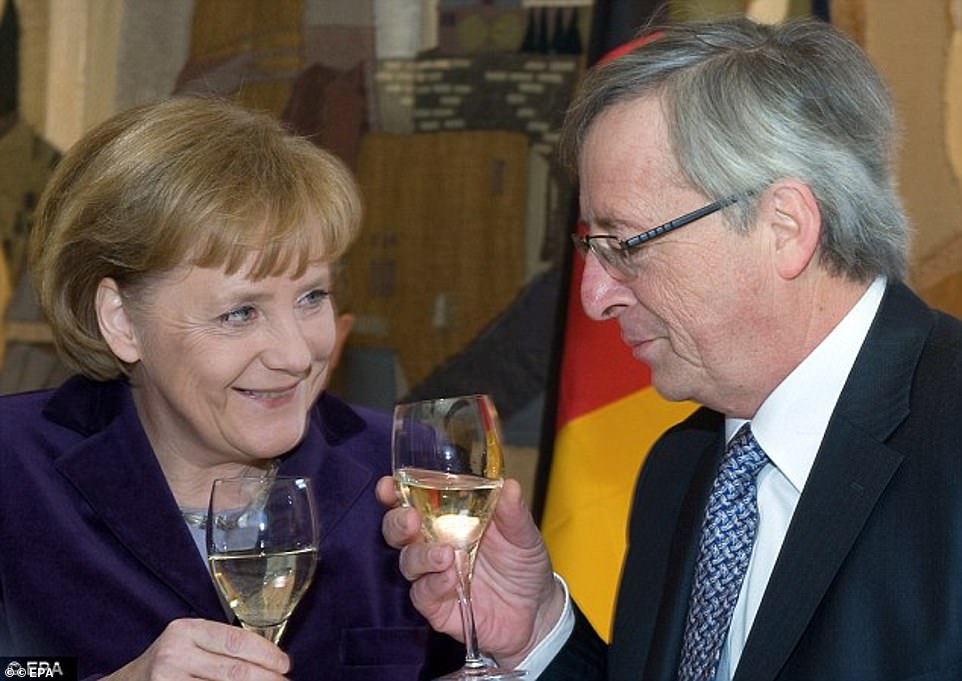 Juncker is often pictured with a glass in his hand, pictured raises a toast to Angela Merkel in 2010, blames journalists for the stories 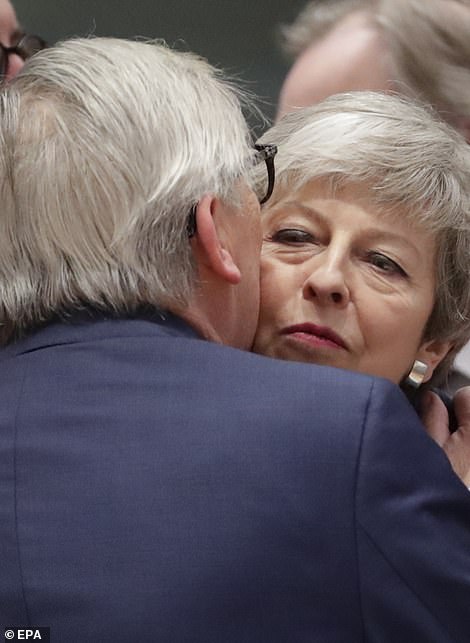 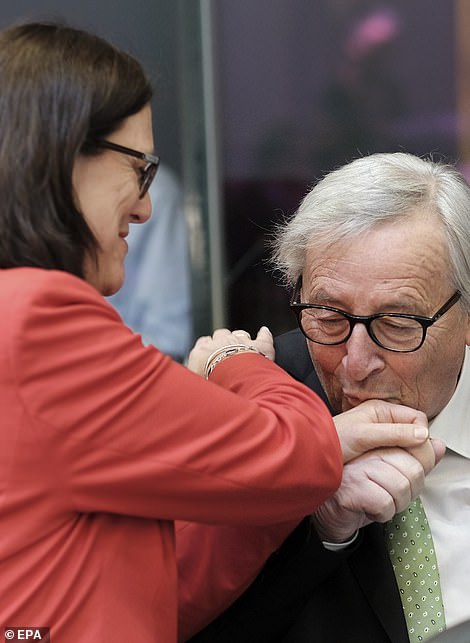 The politician is well known for kissing men and women in public, including Theresa May in March and European Commissioner for Trade Cecilia Malmstrom a fortnight ago 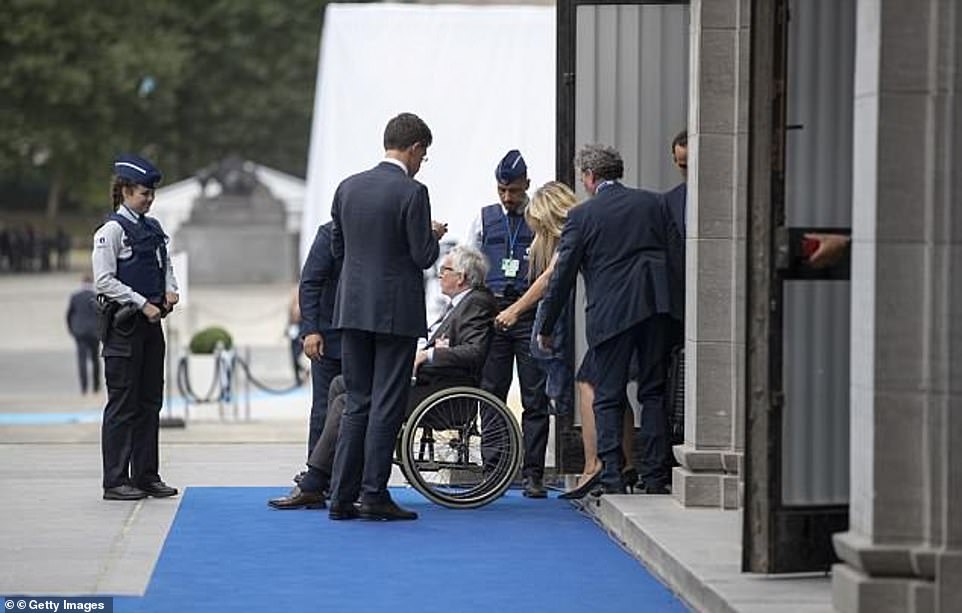 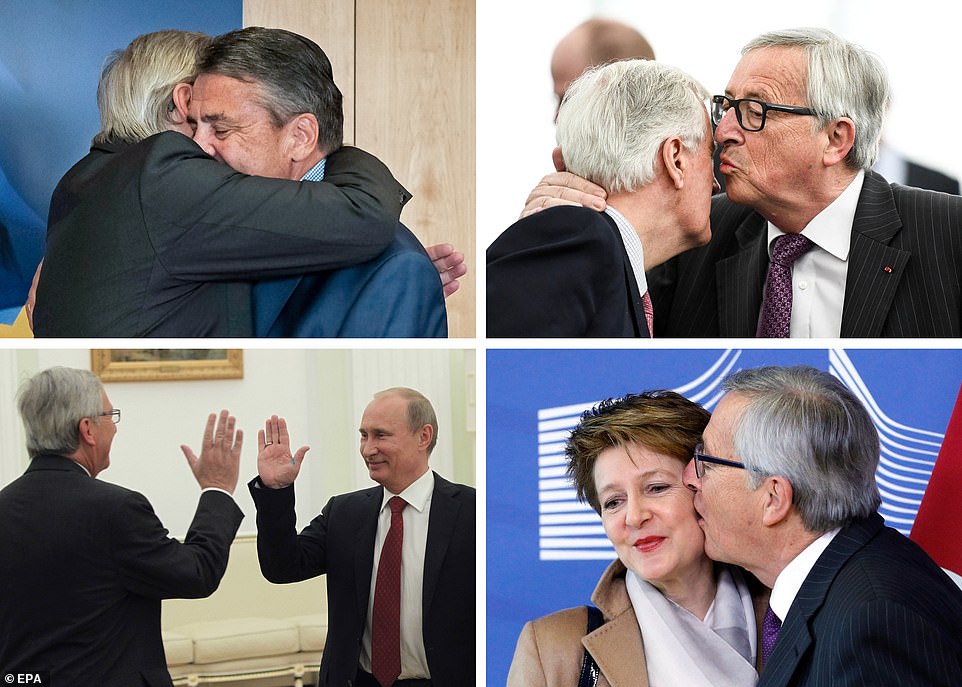 Mr Juncker’s antics have made headlines all over the world (pictured top left to bottom right_ with Sigmar Gabriel, Frans Timmermans, Vladimir Putin, and Simonetta Sommaruga

And this July he was branded an alcoholic who binges on gin and leaving his deputy to govern, in an explosive new account by Brussels insider Jean Quatremer – a French journalist who has covered the EU for years – in The Spectator.

He said he had heard from sources across Europe that the EU politician is ‘a little too fond of the bottle’ adding that one former minister told him: ‘When a bailiff brings him a glass of water at a council of ministers, we all know it’s gin.’

Mr Juncker has repeatedly denied claims that he is an alcoholic and insisted that his sometimes shambolic appearance is down to chronic back pain known as sciatica.

He hit back at reports of his drinking in Mr Quatremer’s story and denied the allegations when speaking to reporters.

Asked directly if alcohol played a role in his stumbling at NATO, he said: ‘I’m really impressed by the interest some people are taking in these not even marginal issues and I am asking for respect.’

He added: ‘I had sciatica and moreover I had cramps in my legs’ adding that he ‘laughed at the pettiness’ of what was being said about him.