Jeff Bezos and girlfriend Lauren Sanchez share a smooch on a yacht on St. Barts on New Year’s Eve

Amazon billionaire Jeff Bezos and his girlfriend Lauren Sanchez are ready to ring in the new year on St. Barts as they continue to enjoy their lavish holiday vacation on a $42,000-per-week super-yacht.

The couple has been on the Caribbean island since before Christmas, and they were spotted sharing a kiss while soaking up the sun on the deck of their chartered luxury yacht, Tender To, in Gustavia on December 31.

Bezos, 57, and Sanchez, 52, were wearing matching white as they cuddled close on a bed on the back of the vessel while vacationing with friends and family, including her son Nikko Gonzalez, 20, whom she shares with former NFL star Tony Gonzalez.

Jeff Bezos, 57, and his girlfriend Lauren Sanchez, 52, were spotted lounging their chartered luxury yacht, Tender To, on St. Barts on December 31 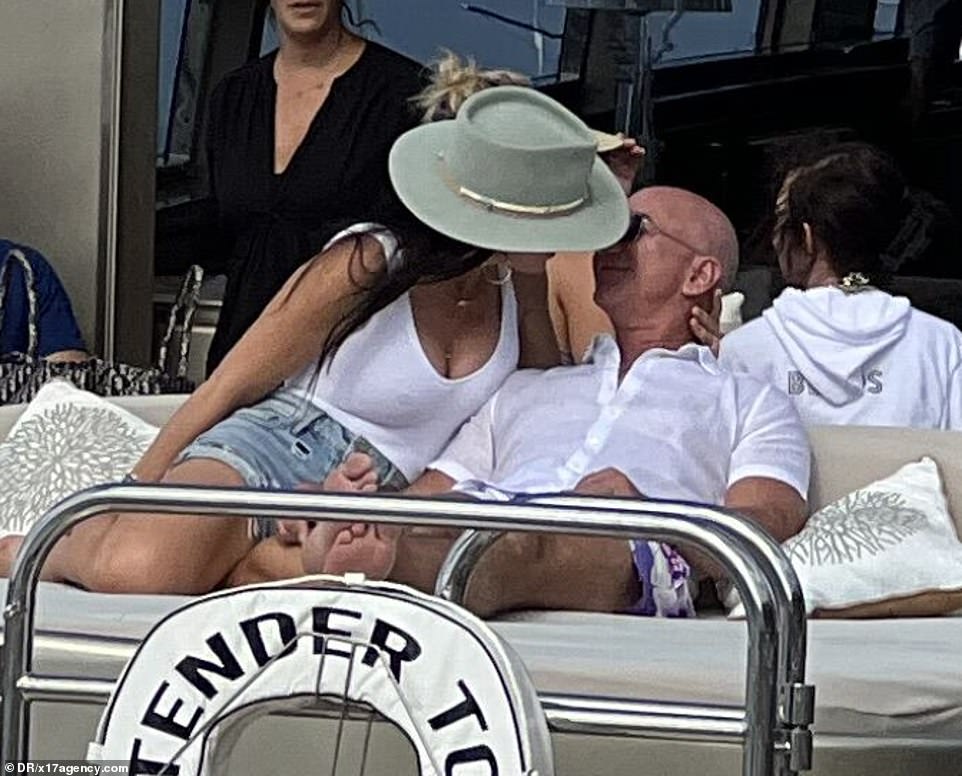 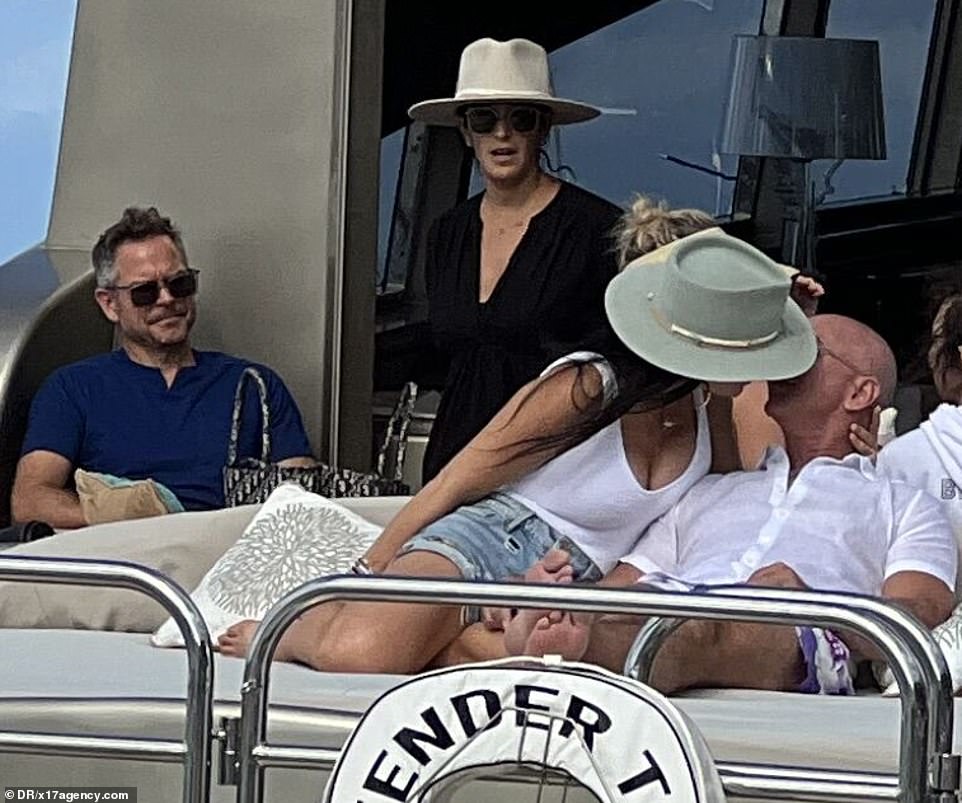 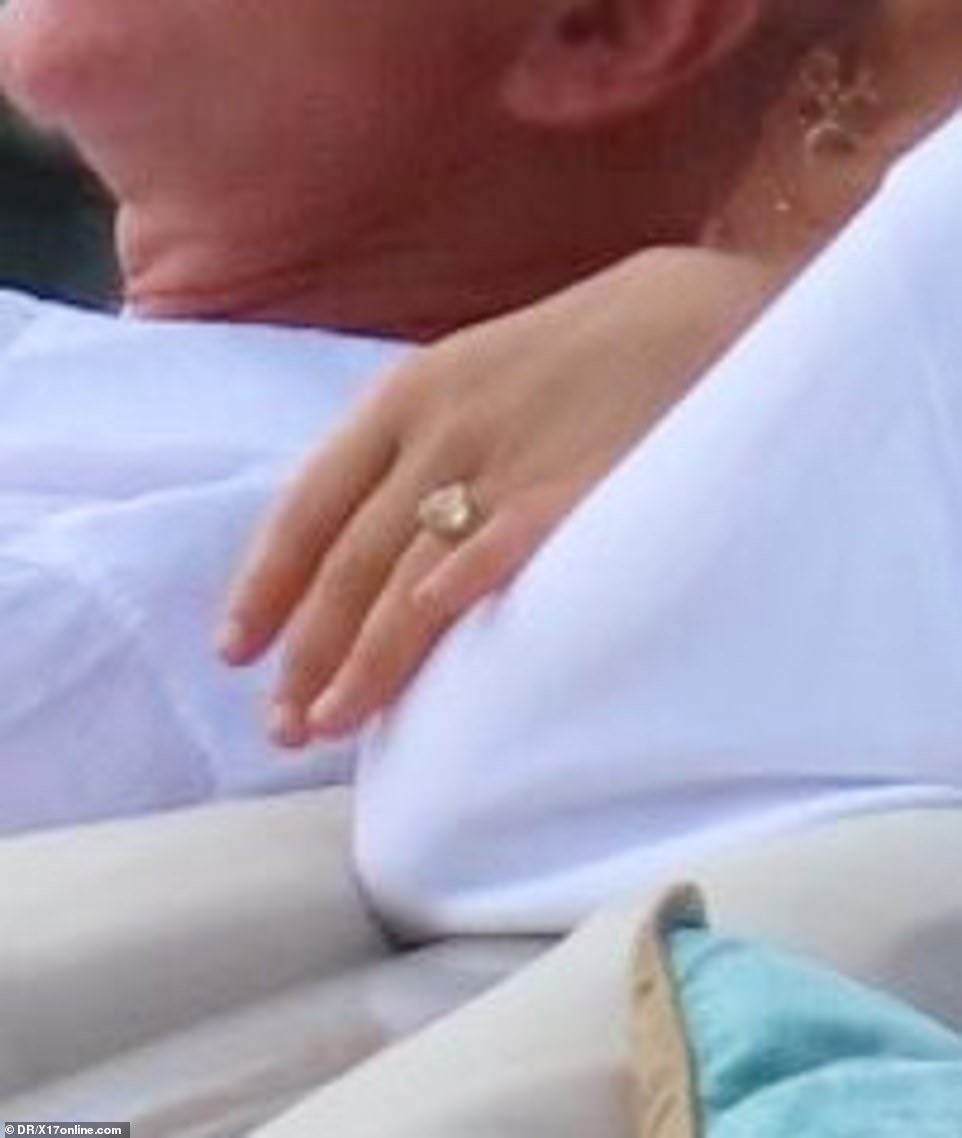 Sanchez was sporting a large diamond ring on her wedding finger. She has worn the ring on a number of occasions, sparking rumors that they are secret engaged

They have been making the most of their vacation with hikes, yacht outings, and plenty of romantic canoodling, but they seemed content lying around on New Year’s Eve, just hours before midnight.

Sanchez was dressed in a tight white tank top and denim cut-offs as she curled up next to her billionaire beau, who was sporting a short-sleeve white button-up shirt and purple-patterned swim trunks.

Both of them had on trendy shades to shield their eyes from the blazing sun, but Sanchez further styled her look with oversize hoop earrings and a wide-brimmed hat.

But her most eye-catching accessory was the large diamond ring that she had on her wedding finger. She has been seen wearing the ring on a number of occasions in the past, sparking ongoing speculation that she and Bezos are secretly engaged.

The couple’s pals, newlyweds Rob Sanborn and Elena Sanchez Blair, were among those who photographed milling around behind them on the yacht, but they appeared to be in their own little world. 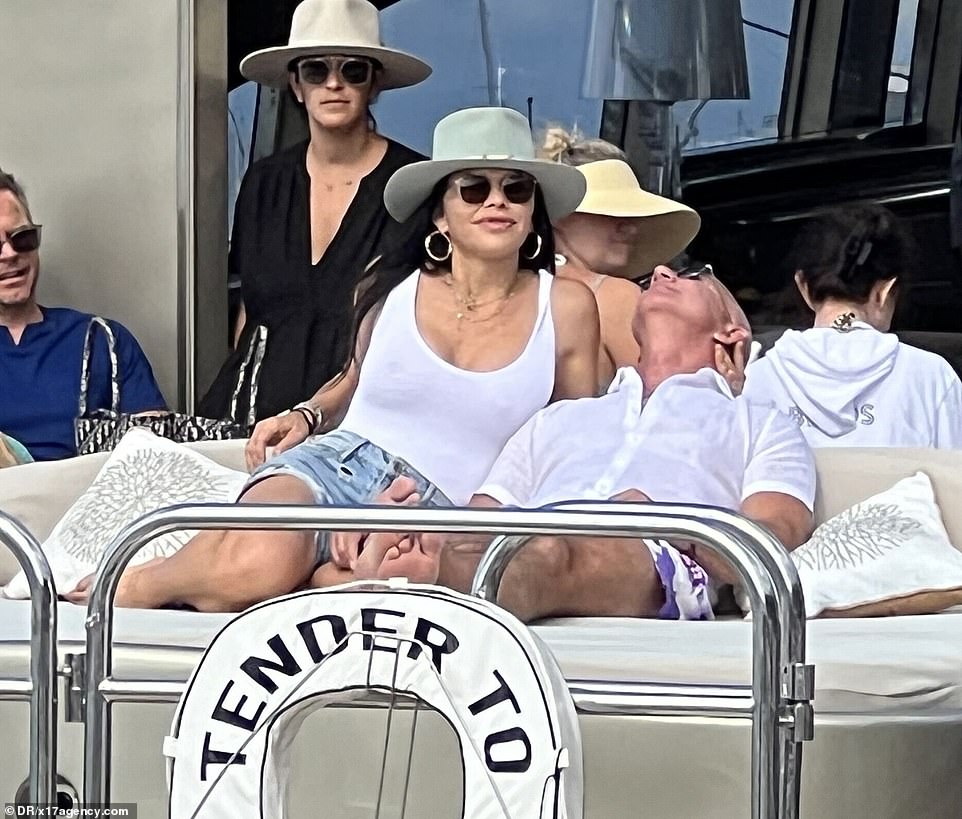 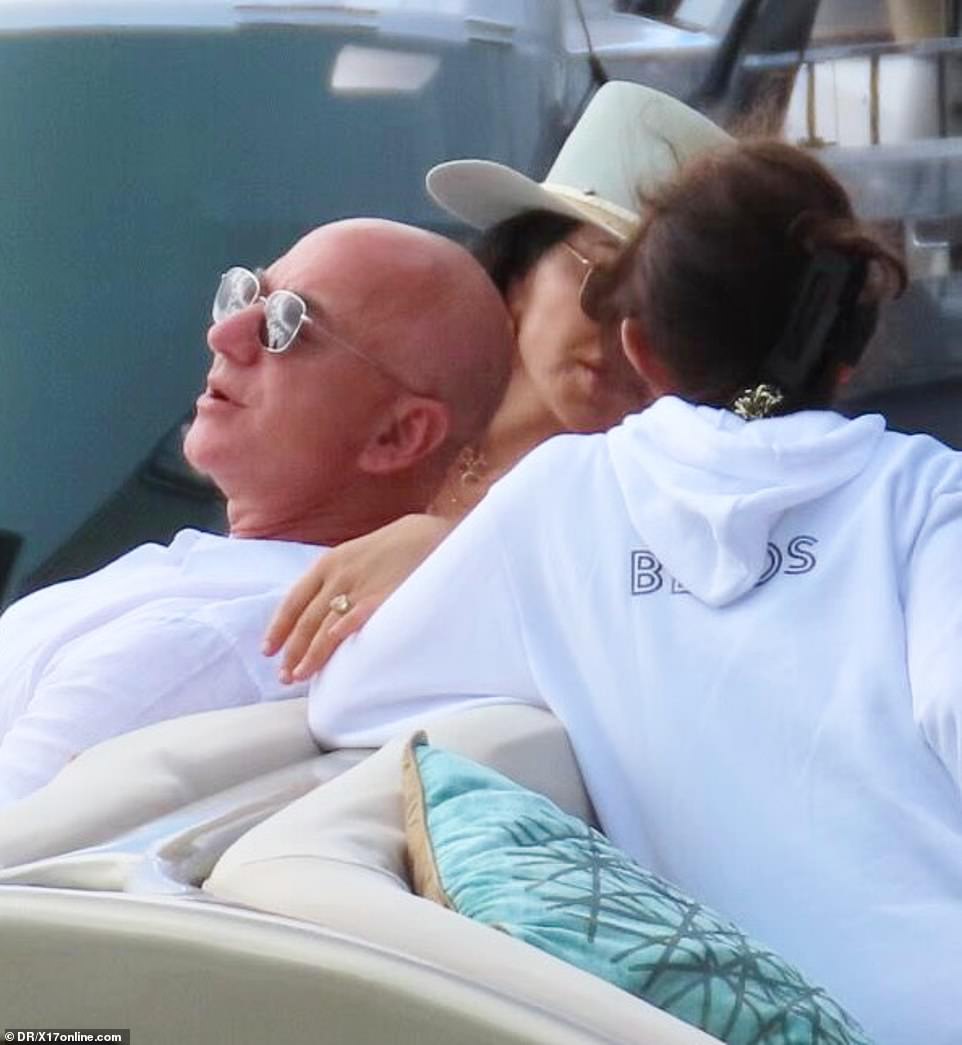 Sanchez’s large diamond ring was on display as she chatted with a woman who appeared to be Bezos’ mother, Jacklyn Bezos 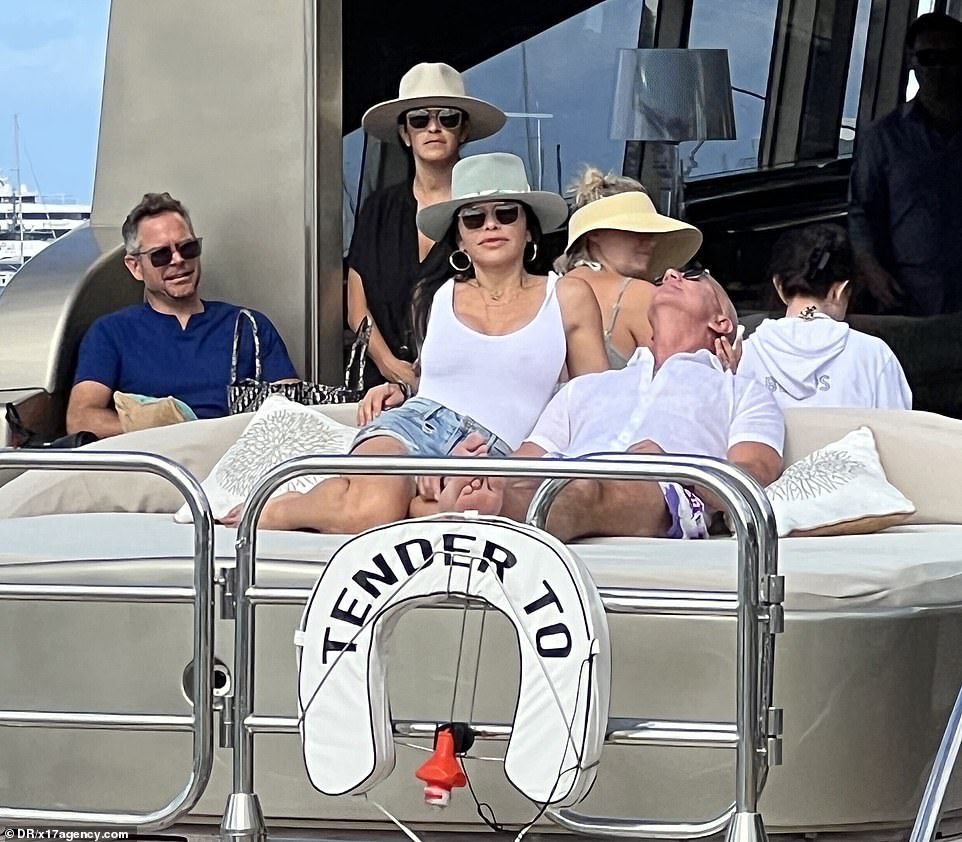 Sanchez kept her eyes forward as she leaned back on her elbows, and at one point, Bezos rested his head in her hand. She then leaned in close to give him a kiss.

Bezos’ adoptive father, Miguel Bezos, was also seen on the yacht. His mother, Jacklyn Bezos, and younger brother, Mark Bezos, are believed to be on St. Barts with them as well.

On December 29, the Amazon tycoon took a break from his vacation to share a sweet photo of himself on a boat with his mother in honor of her birthday.

‘Happy Birthday, sweet Mom,’ he captioned the image on Instagram. ‘Couldn’t feel more lucky to be celebrating you with our entire family on this special day. We love you thissssss much.’

A few days prior, on December 27, Sanchez shared her own photos from the trip, including a saucy picture of herself posing in a bikini while Bezos leaned in toward her.

In another, she is giving her son Nikko a kiss while modeling a black bikini. 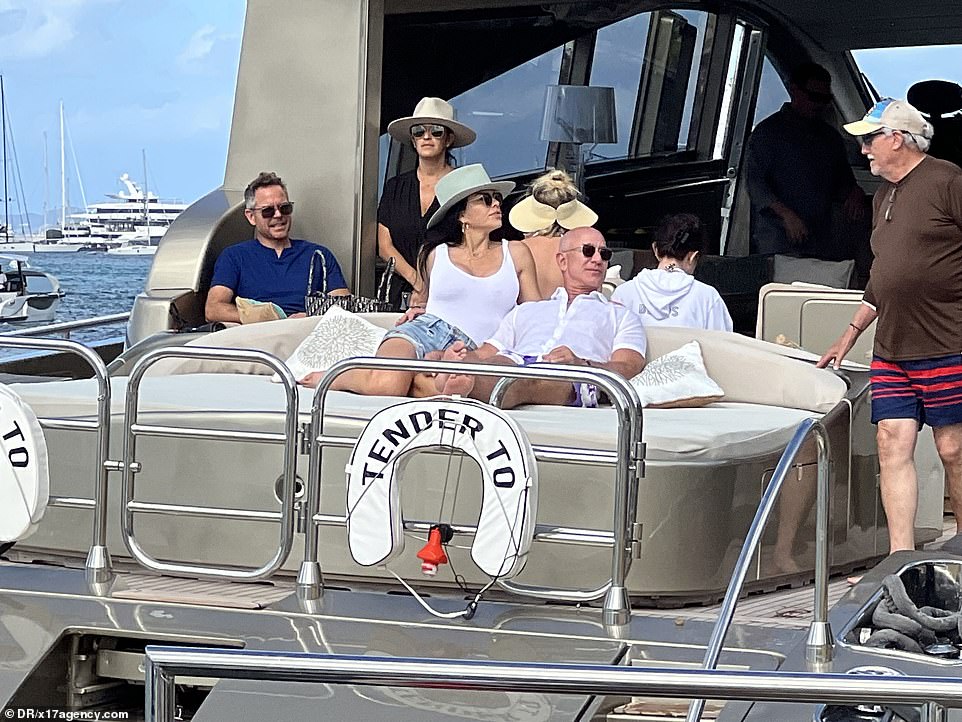 Bezos’ adoptive father, Miguel Bezos (far right), appeared to be on the yacht with them on Friday 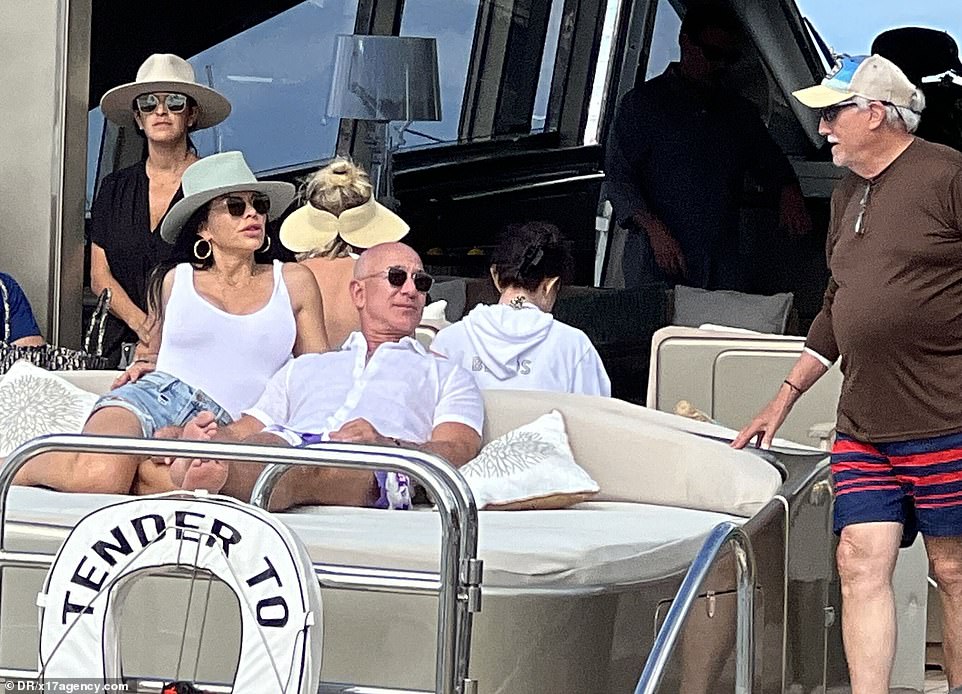 Bezos’ younger brother, Mark Bezos, and his mother, Jacklyn, are also believed to be with them on St. Barts 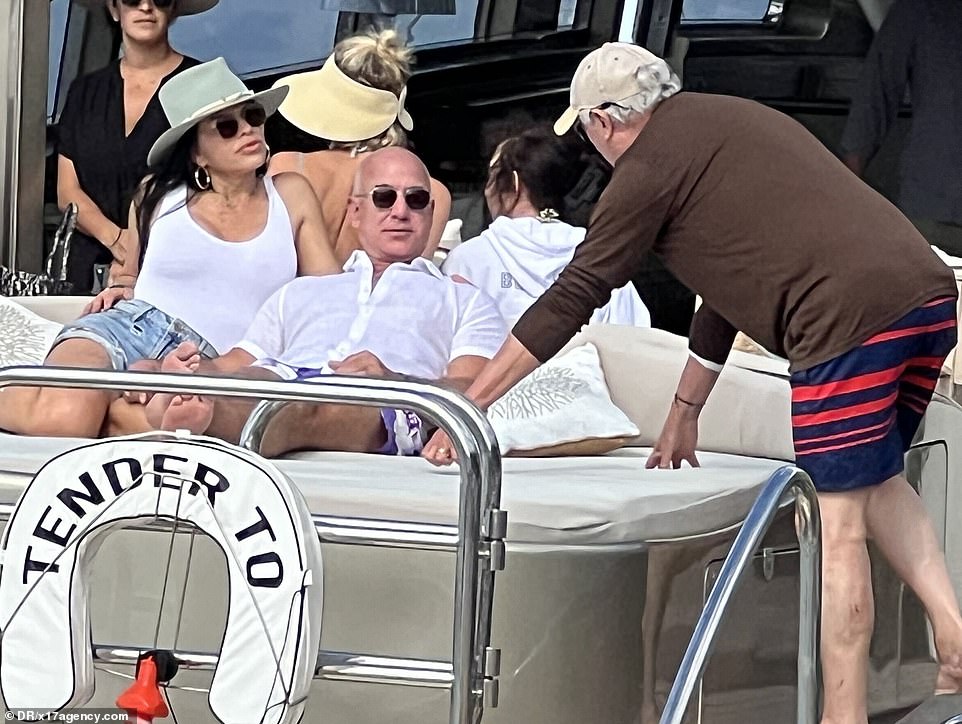 While their were others on the luxury yacht, the couple only seemed to have eyes for each other

Sanchez has a younger son, Evan Whitesell, 15, and daughter, Eleanor Whitesell, 13, with her Hollywood agent ex-husband Patrick Whitesell, but it’s unclear if they were with her on the trip.

Her carousel of pictures also included snapshots of her sharing a drink with friends, Bezos in a pool with his brother, and her on a hike with her longtime boyfriend.

‘Photo dump! Closing out the holiday week and gearing up for the New Year,’ she wrote. ‘I am so grateful for all the love that surrounds me everyday. My partner, family and friends. I love you all so much and I am thankful for your love and support. Bring it on 2022.’

On December 26, the couple took a boat out on the water with a group of friends and spent some time lying out on a raft, where a bikini-clad Sanchez cuddled up to her shirtless beau who matched her in a pair of black swim trunks.

Sanchez had quite a few outfit changes during the outing.

The pair showed up fully dressed to the dock, Bezos still wearing black swim trunks with a green shirt — with quite a few of the buttons left open at the top. 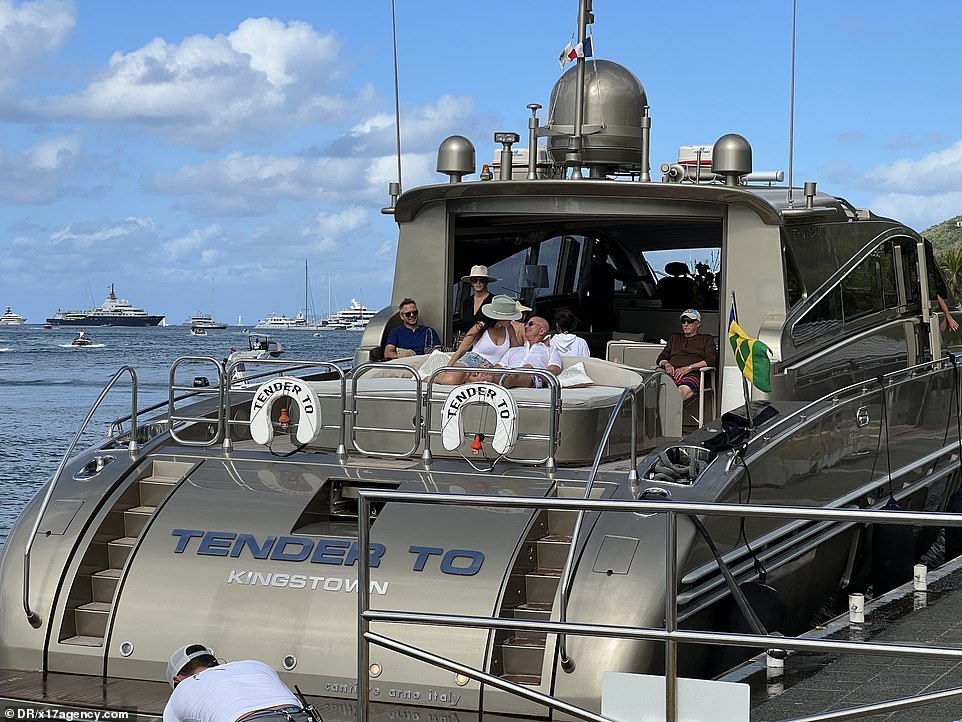 The group charted the Tender To, a luxury yacht from the iconic Italian brand Leopard Yachts. The vessel costs $38,000 to $42,000 per week, plus expenses 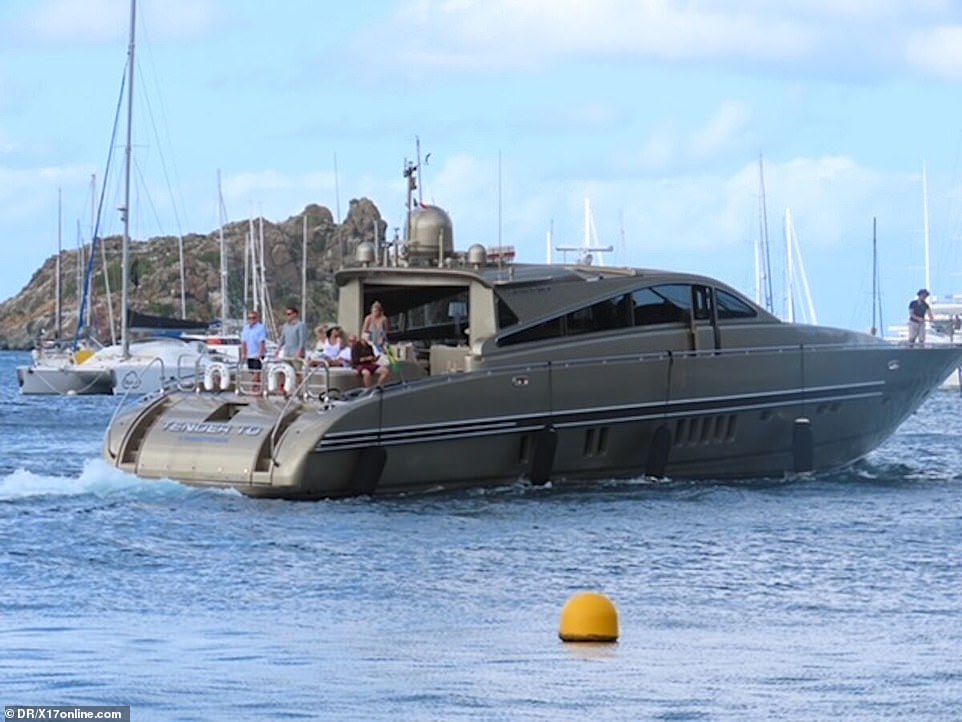 Measuring 88 feet 7 inches, the vessel from the iconic Italian brand Leopard Yachts was built in 2005 and can sleep up to seven people in a master suite, two double cabins, and two twin cabins. 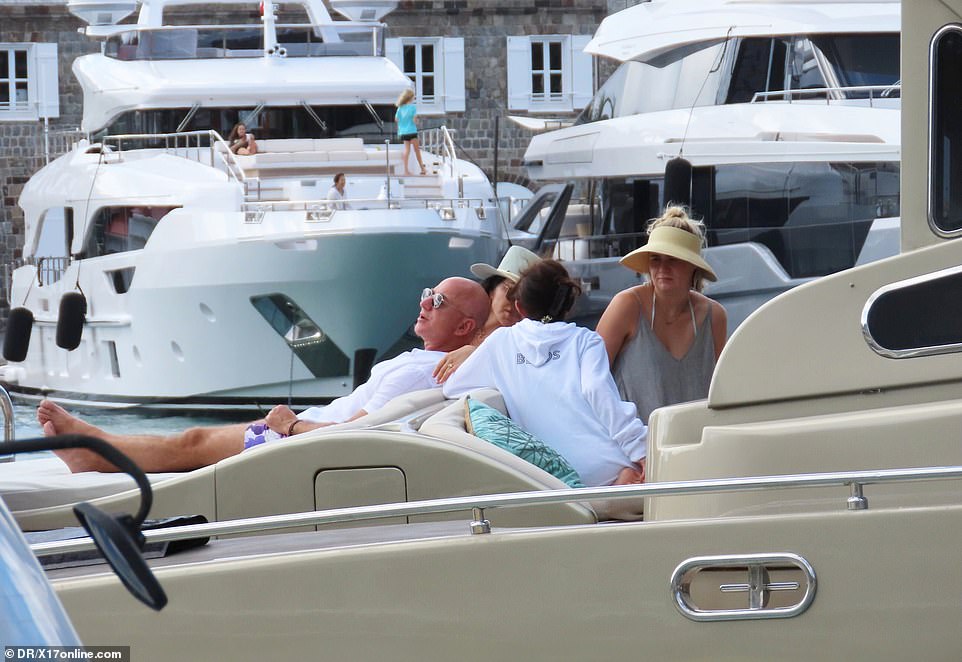 When Sanchez wasn’t gazing into Bezos’ eyes, she was deep in conversation with the other women on board the yacht 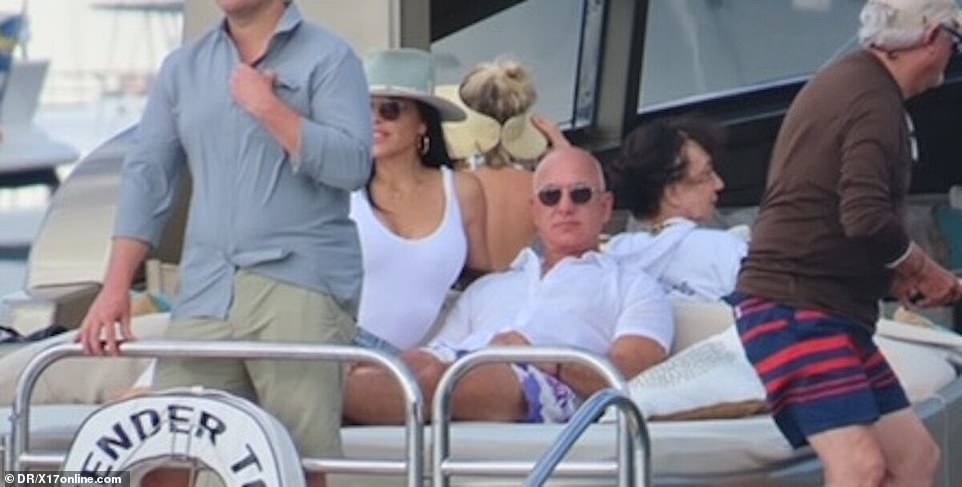 Sanchez’s eldest son, Nikko Gonzalez, 20, (not pictured) whom she shares with former NFL star Tony Gonzalez, was also on the trip to St. Barts 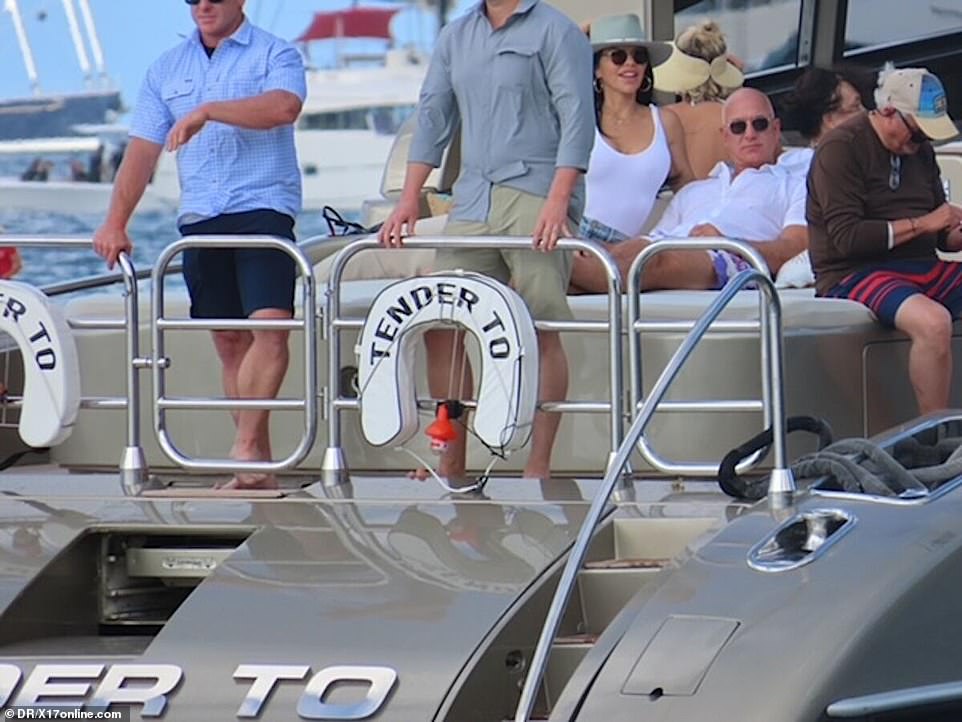 The couple’s friends and family happily milled around while docked in Gustavia, the capital of St. Barts

He accessorized with a baseball cap, a necklace, and some bracelets to his yacht ensemble.

Sanchez, walking arm-in-arm with him, was dressed in a pair of high-waisted white shorts and a beige crop top.

The couple started out lying down side by side on the boat, with Sanchez leaning in to kiss Bezos as they waited for the boat to depart.

While they looked around, Sanchez ran her arm around Bezos, stroking his ear and the back of his head with her fingers.

Eventually, Bezos unbuttoned his shirt, leaving it open to show off his chest and stomach before eventually taking it off altogether.

Sanchez beat the heat by ditching the clothes for a black bikini, wrapping her bottom half in a sheer black sarong. She blocked out the sun with a wide-brimmed hat and glittered in a selection of jewelry including a necklace and earrings. 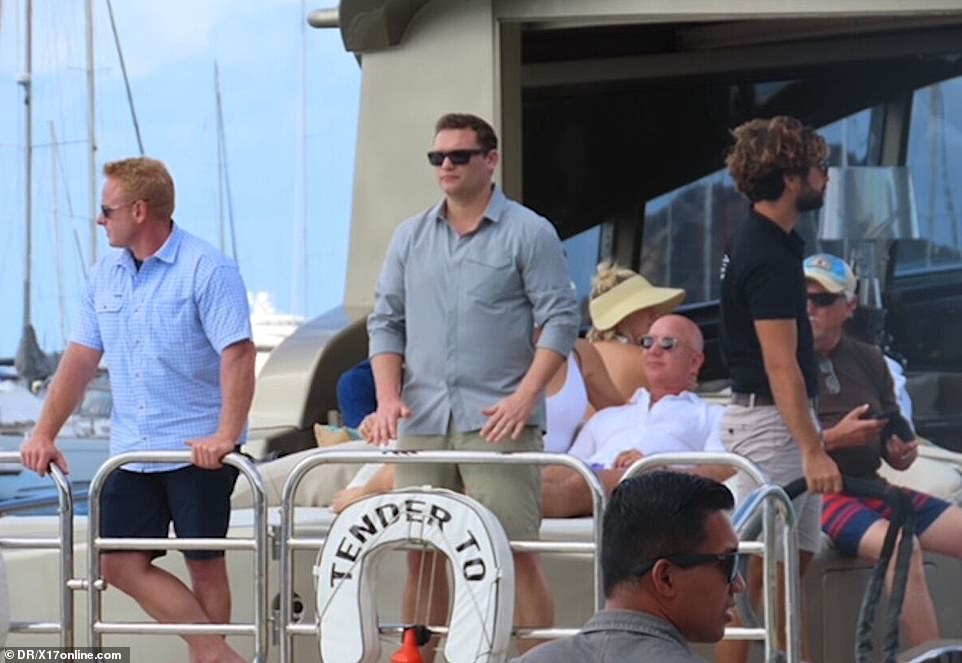 Sanchez and Bezos have been making the most of their vacation with hikes, yacht outings, and plenty of romantic canoodling 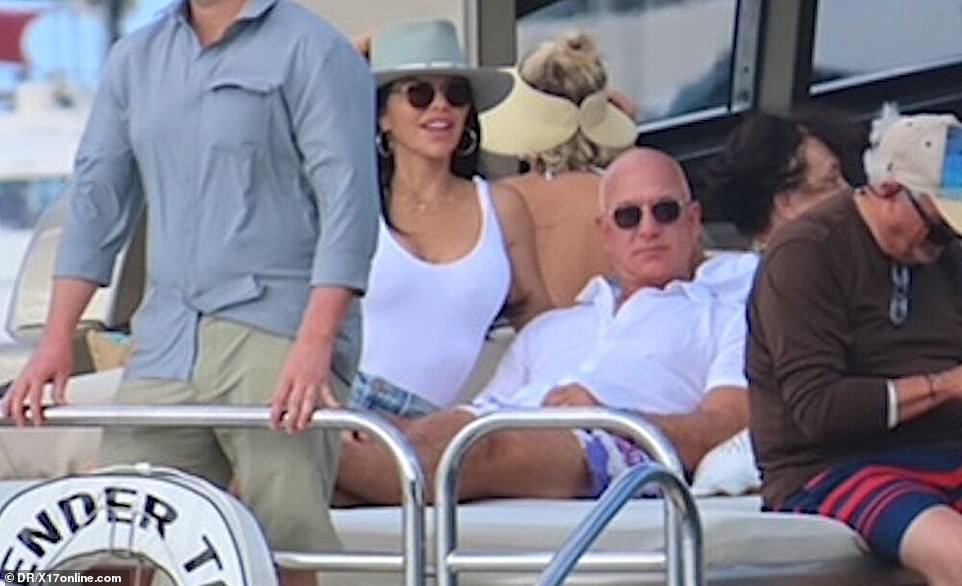 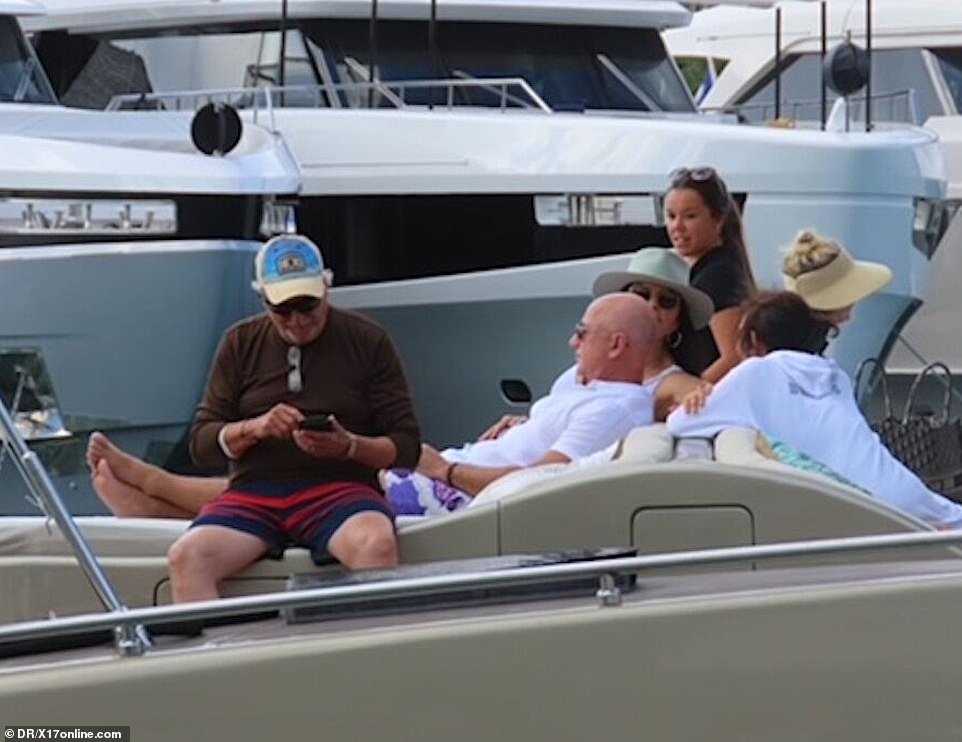 At one point, Bezos’ dad sat down on the bed with them to scroll through his cellphone 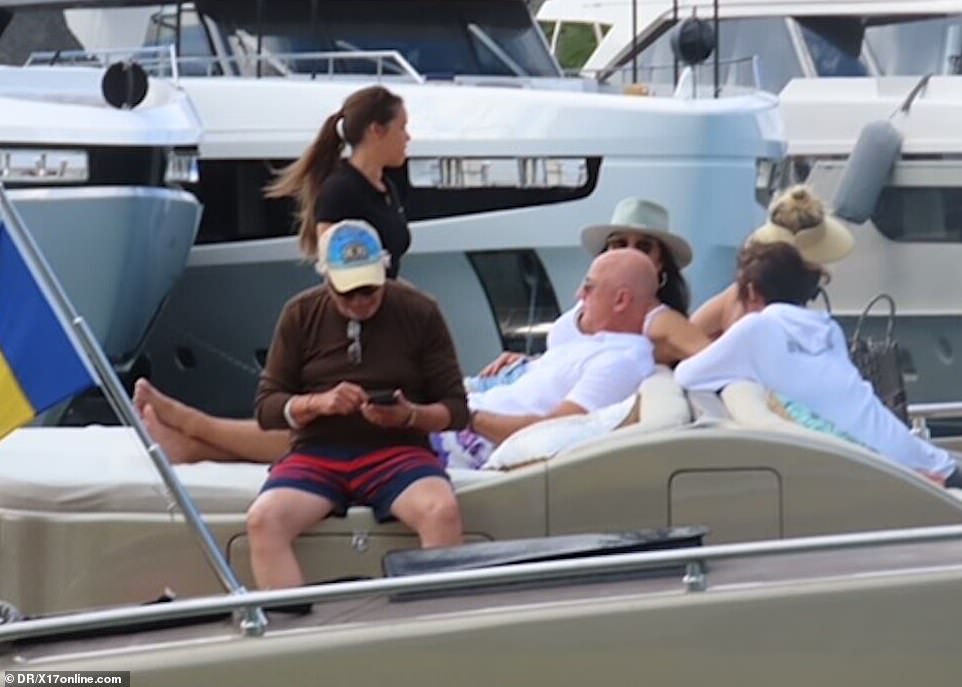 It’s unclear how long the group chartered the luxury yacht for, but they seemed to enjoy spending the holidays on the water 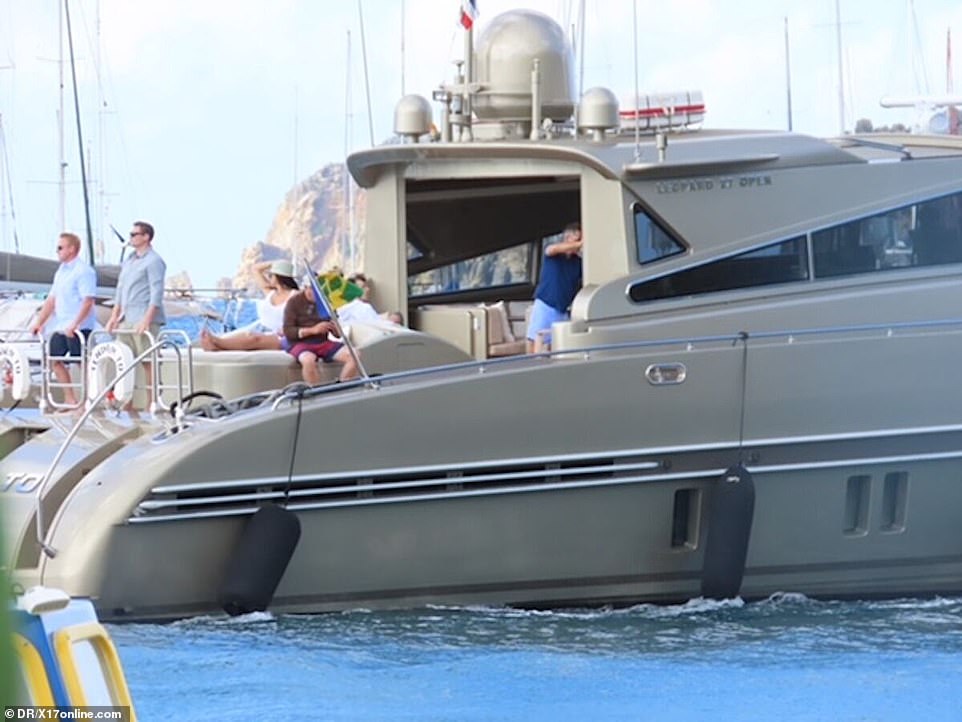 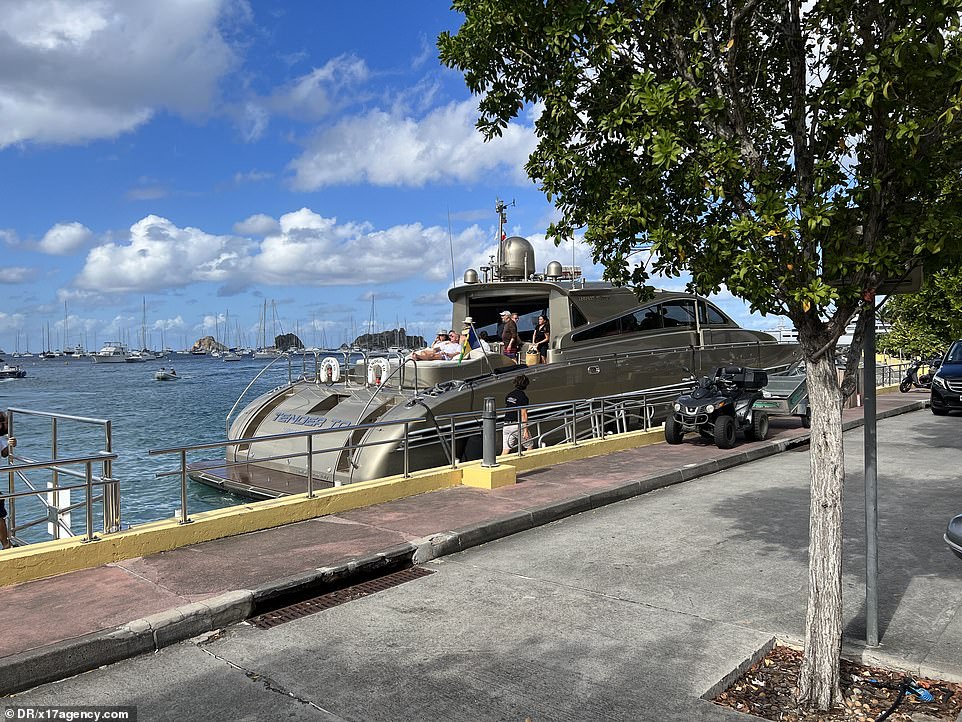 In swimsuits, the pair laid out together on a raft, and also stood alone on the yacht to hug and kiss.

By the time they were back at the dock, Sanchez had changed again, this time into a sheer white button-down with a matching white sarong.

The group chartered the luxury super-yacht Tender To for the trip. Measuring 88 feet 7 inches, the vessel from the iconic Italian brand Leopard Yachts was built in 2005 and can sleep up to seven people in a master suite, two double cabins, and two twin cabins.

Last Sunday marked the second day they were seen out yachting on this trip. On Christmas Eve, Sanchez donned a bikini with a red and white pattern for the boat ride, while Bezos wore a pink and red bathing suit covered in Hawaiian flowers. He accessorized with shades and a white feather necklace.

They enjoyed some touchy-feely fun then, too, kissing and cuddling on a raft, talking, and laughing. As they boarded, Bezos reached out to give Sanchez a rub on her shoulders. 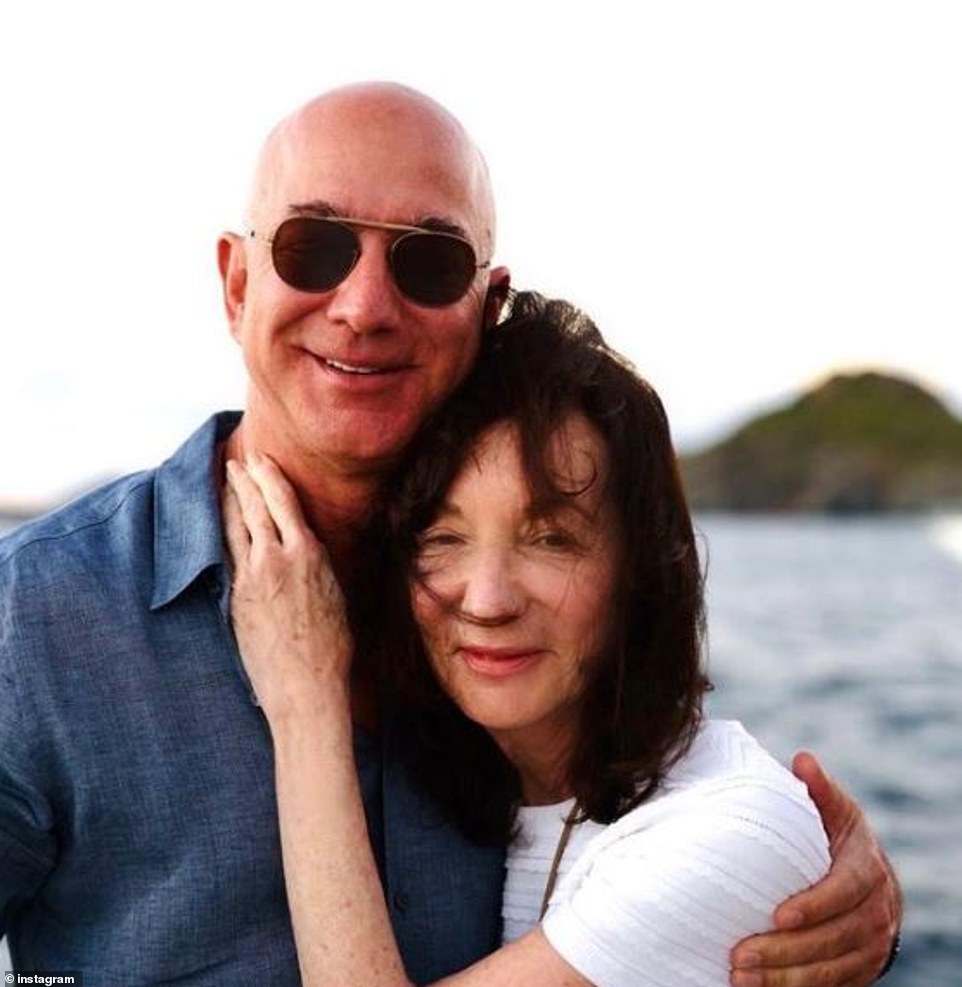 In his caption, he said the entire was with them to celebrate her ‘special day’

Earlier this week, the pair was seen canoodling on a hike on the island. Both dressed in sportswear and sneakers, they stopped to enjoy the view and share some kisses, during which Sanchez appeared to cop a feel of Bezos’ behind.

As they continued their hike, Bezos slung an arm around Sanchez’s shoulders as they kept up the PDA.

The couple, who went public with their relationship in January 2019 after Bezos split with wife MacKenzie, were quite handsy while communing with nature.

At one point, Bezos and Sanchez stopped to take a bit of a break on a bench, on which they sat side by side. Sanchez leaned up against Bezos, resting one of her hands on his thigh, while he wrapped his right arm around her shoulders.

Bezos and Sanchez have vacationed together on St. Barts before. In 2019, they were also joined by Sanchez’s son Nikko.

The Amazon founder, who is estimated to be worth $210 billion, is the second richest man in the world after Tesla owner Elon Musk, who recently knocked him off the top spot with a fortune of $276.2 billion compared to Bezos’ $203.9 billion, according to Forbes.

Bezos first became a billionaire in 1998, the year after Amazon went public as an online bookseller, and has since increased his fortune by 12,425 per cent — now raking in more than $140,000 per minute.

Nearly 90 per cent of his wealth is tied up in his 10 per cent stake in Amazon — with each share currently worth $3,540.70 — with the rest of his money invested into other avenues such as Blue Origin and property.

He has made several highly-publicized donations since stepping down as CEO of Amazon in July, including to the Obama Foundation and Baby2Baby.

As part of the gift, Bezos asked that the plaza at the Obama Presidential Center be renamed John Lewis Plaza, after the late congressman and civil rights leader who spent decades fighting for voting rights.

Earlier in November, he pledged almost $100 million to groups working to end homelessness.

Sanchez promoted her boyfriend’s environmental efforts on Instagram on December 30, writing: ‘Looking ahead to the new year, Jeff and I couldn’t be more excited and humbled to focus on our passion and commitment to climate change by helping to protect and restore nature, alongside our team @BezosEarthFund.’