Jeff Bezos and Lauren Sanchez made their relationship official on Sunday, seven months after the philandering spouses were exposed by the National Enquirer.

The loved up pair were seen on Sunday at the All England Tennis Club as they watched the Wimbledon men’s final between Novak Djokovic and Roger Federer.

Suiting courtside at one of the most hallowed venues in sports while two of the greatest players in the history of tennis battled it out was far less interesting to Bezos however than the prospect of kissing his paramour, which he was photographed doing throughout much of the match.

This marks the first time the two have publicly attended an event together, and came just a few wees after Bexos finalized his divorce with wife Mackenzie, who walked off with a settlement that included $38 billion worth of Amazon stock.

The two snagged some amazing seats too, winding up just three rows behind Prince William and the Duchess of Cambridge.

Wendy does Wimbledon: Jeff Bezos and Lauren Sanchez (above) made their first official public outing on Sunday as they attended the Wimbledon men’s final at the All England Tennis Club 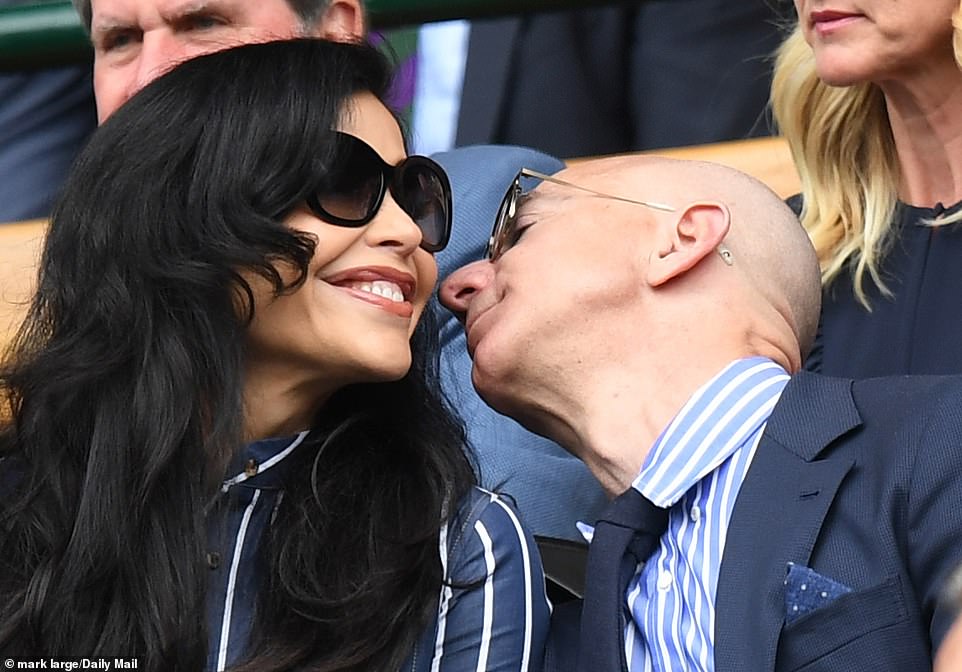 A kiss from Bezos on the grey: The pair sat in the Royal Box in seats that were three rows back from Prince William and the Duchess of Cambridge 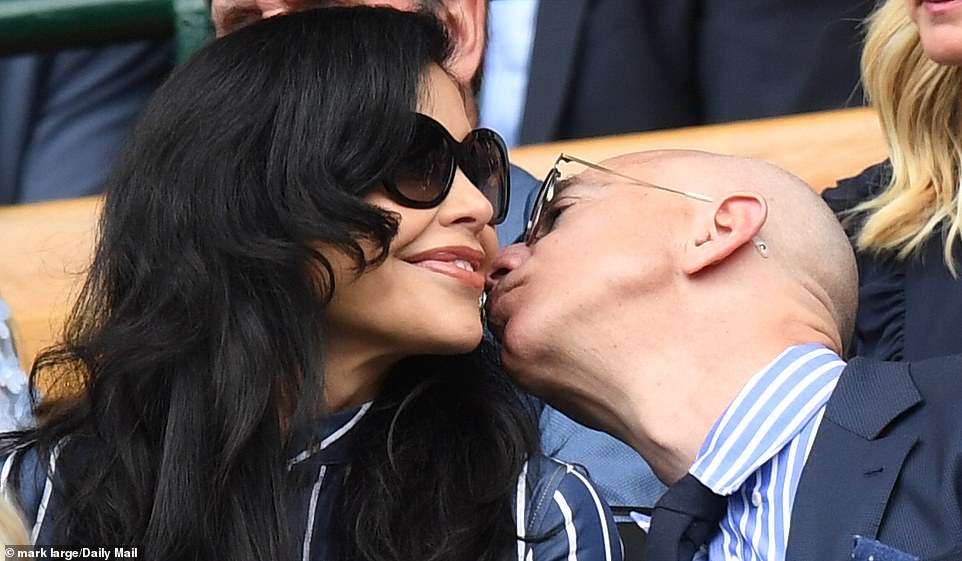 Mister and mistress: Bezos seemed far more interested in Sanchez than the actual match, and was sen covering his paramour with kisses throughout the day (above) 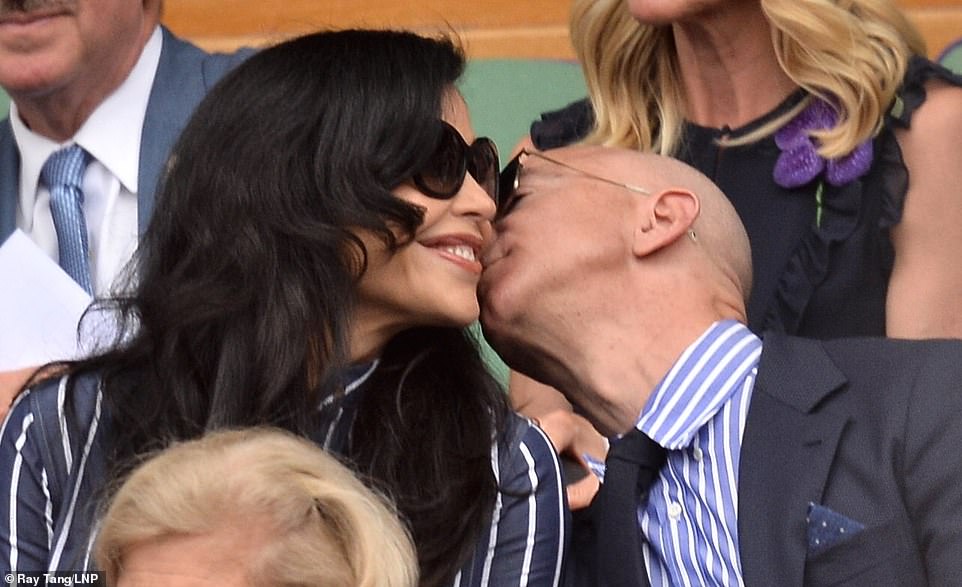 Kissed off: The Amazon founder, which is the world’s richest man, finalized his divorce from wife Mackenzie last month, handing over $38 billion of Amazon stock in the split 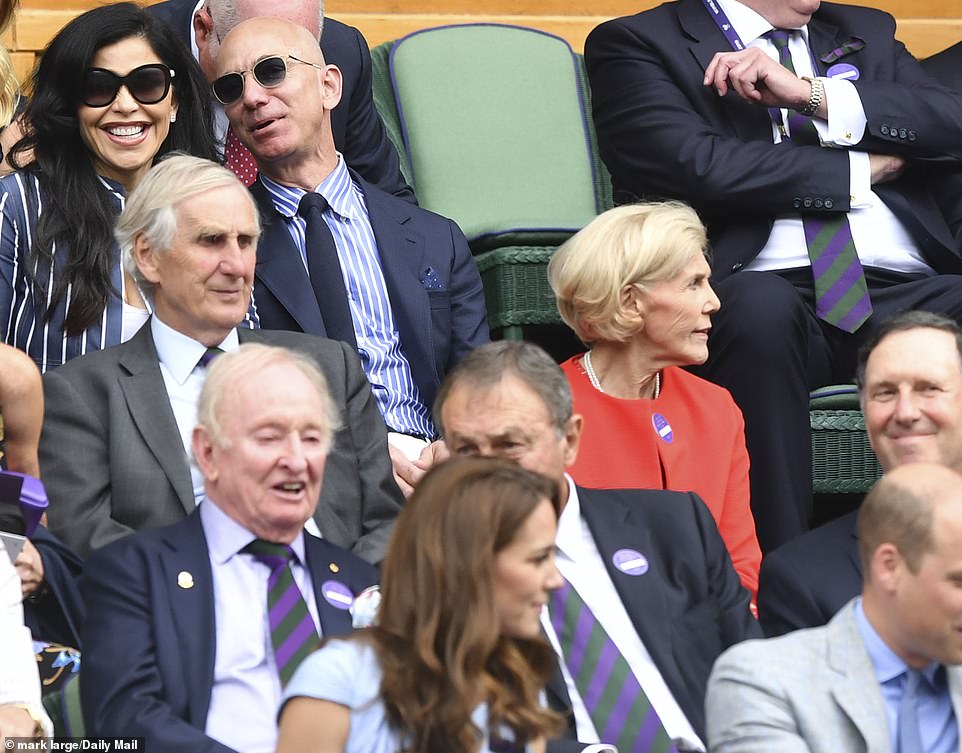 Forsaken most others: The bald-headed philanderer used his power to keep reports of his affair out of the press while playing up his strong his relationship with his wife (Bezos and Sanchez behind Prince William and Catherine, the Duchess of Cambridge on Sunday)

Sanchez was allegedly spotted last week at the annual Allen & Co conference in Sun Valley, though DailyMail.com has yet to confirm that report.

Bezos also attended the annual gathering, but flight records obtained by DailyMail.com show his plane heading in and out of Idaho each day, making it difficult to confirm Sanchez’s attendance.

Bezos arrived in Sun Valley just before midnight in Tuesday, and on Wednesday the plane made a quick round trip to Seattle.

On Thursday, Bezos left the conference after just two days.

Bezos was able to avoid being pictured at Sun Valley, but that was not the case once he arrived at Wimbledon.

Prior to his trip to Sun Valley and then Wimbledon, Bezos spent the day with his kids, much like any other divorced dad.

‘Binged Stranger Things Season 3 yesterday with my kids and a few of their friends. God, Eggos are good, and the show was even better. Awesome season,’ wrote Bezos.

Divorce documents and an SEC filing obtained by DailyMail.com reveal that Bezos transferred shares equal to four percent of the company’s outstanding common stock when his split was finalized by the court.

That could not happen however until 90 days after the initial filing under state law in Washington, where the two own a massive Mercer Island property.

This means that the $35.85 billion settlement Ms. Bezos was reported to be receiving on April 4 was not an accurate sum, with that number drastically increasing and deceasing every time Amazon stock fluctuated over that three-month period.

In the end, Mackenzie managed to pocked an additional $3 billion because of that waiting period, with stock increases putting the value of her stock at $38.3 billion when a King County judge signed the divorce order last Friday.

The Petition for Divorce was filed by Mackenzie on March 28 in King County, Washington.

There were few surprises in that filing, save for the fact that the richest man in the world was still living in the same house as his estranged wife.

‘We were married on September 4, 1993 at Palm Breach Florida,’ read the petition.

‘We currently live in the same household.’

The two at the very least had their space despite ebing under the same roof, as their marital home in Mercer Island is a $80 million compound with boat house, guest house, docks, and a pool on close to 10 acres of land.

Mackenzie also confirmed that the couple did not have a prenuptial agreement, and that the two parties instead relied on a Separation and Property Settlement Agreement to split their marital assets.

That meant that Mackenzie could have made a case to walk off with more than half of her husband’s wealth, but instead opted not to receive any spousal support or even have her lawyer’s fees covered by her ex.

The lawyers hired to handle the split were also not Hollywood heavy hitters like some reports had initially claimed, and instead two local law firms represented the couple.

On April 4 the pair went public with the news, the same day that the Petition was formally filed in King County.

Mackenzie claimed on Twitter that she handed all of her interests in the Washington Post and space-exploration company Blue Origin to her husband, but that was not detailed in any of eh divorce filings.

The two also had to take a class regarding the parenting of their four children, just like every other divorced couple is required to do in Washington.

One day after Bezos announced he had filed for divorce, Sanchez followed suit.