‘Mr Bezos, you’re on mute.’ Amazon CEO and world’s richest man struggles with technology at antitrust congressional hearing – and is caught sneaking a snack on camera

Jeff Bezos fumbled his way through a high-profile virtual congressional hearing on Wednesday as he struggled with technical difficulties and was caught sneaking a snack on camera.

The highly-anticipated hearing, which had been postponed by two days, was plagued with technical difficulties and awkward pauses.

During the first part of the hearing, Bezos’ image was never shown full-screen like his fellow witnesses, forcing the panel to take a 10-minute break to fix a technical issue. 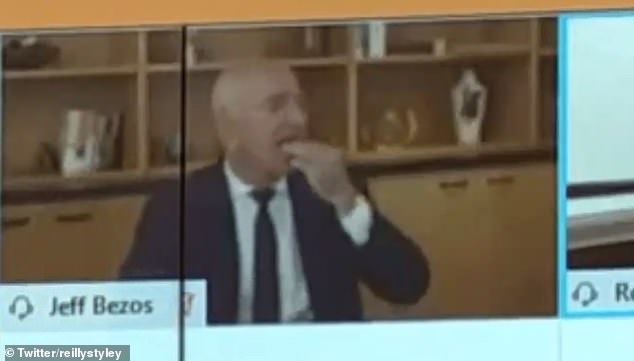 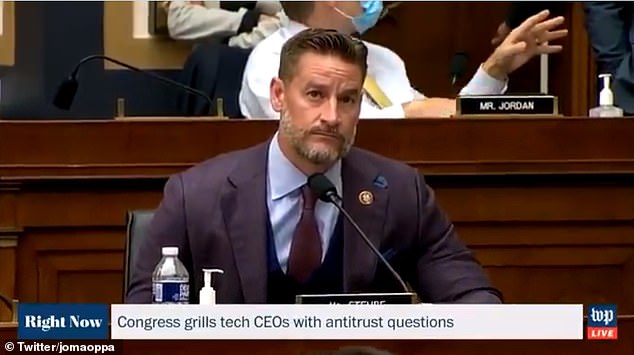 He suffered another embarrassing gaffe while responding to Rep. p. Greg Steube (pictured) and forgetting to turn on his mic

He managed to escape questioning for about an hour due to the glitch and was seen casually snacking on camera while lawmakers quizzed his counterparts.

Bezos was grilled intensely later on in the hearing but continued to struggle with technology – at one point forgetting to take his microphone off mute.

The world’s richest man suffered the embarrassing gaffe while being quizzed by Rep. Greg Steube on anti-trust. 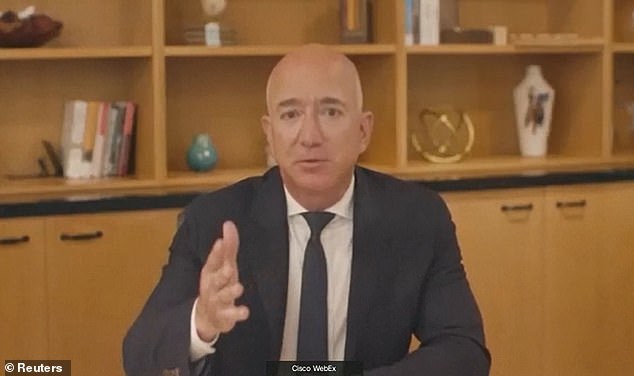 Of the witnesses, Bezos is the only one who has not previously been has to testify before Congress regarding tech issues

During the first part of the hearing, Bezos’ image was never shown full-screen like his fellow witnesses – and eventually the panel had to take a 10 minute break to fix a technical issue

Bezos quickly turned his mic back and apologized for the error.

Lawmakers focused on asking the CEOs of Alphabet Inc’s Google and Facebook Inc a barrage of questions on alleged abuses of market power.

Poor audio quality, flat-screen televisions going off, chief executives appearing together as thumbnails on a large screen – led to observers on Twitter and frustrated viewers to mock the virtual set-up.

The committee did not immediately comment on the issue.

‘Worst zoom quiz night ever,’ tweeted Emily Bell, director of the Tow Center for Digital Journalism at Columbia University, sharing a screenshot of the executives shown in small side-by-side boxes. 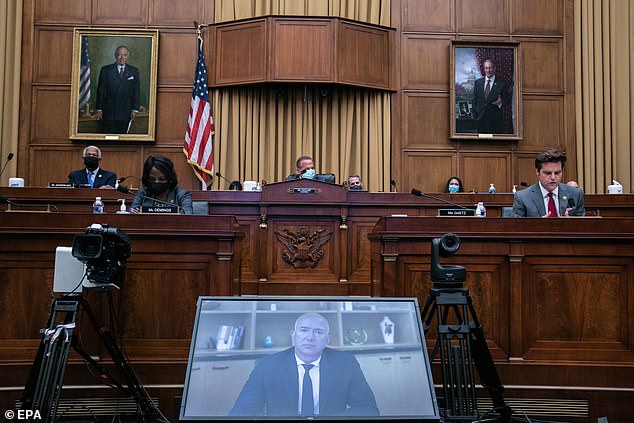 The CEOs were later shown individually on large screens, leading some viewers to call on the Twitter account @ratemyskyperoom to judge their surroundings.

Others criticized the executives’ sound quality or delayed audio.

It was not clear what happened with Amazon’s virtual feed, according to a congressional aide with direct knowledge of the matter.

The committee also took a 10-minute break to fix technical issues for those in the hearing room.