Jeff Bezos has just given CNN’s Van Jones and celebrity chef Jose Andres $100 million each to donate to the charity of their choice just hours after spending $5.5billion on his 10-minute space journey.

The world’s richest man gave the two men what he called a ‘courage and civility award’ in Texas on Tuesday following his successful space launch.

They were both on hand to accept their $100 million, which was announced at the conclusion of Bezos’ space launch press conference.

Jones is a CNN political contributor and founder of Dream Corps, which is a nonprofit for criminal justice reform.

Andres, a Spanish chef who founded World Central Kitchen – a non-profit devoted to providing meals in the wake of natural disasters, received the $100 million.

Jeff Bezos gave CNN’s Van Jones $100 million on Tuesday for what he called a ‘courage and civility award’. As he accepted the award, an emotional Jones said: ‘Sometimes dreams come true’ 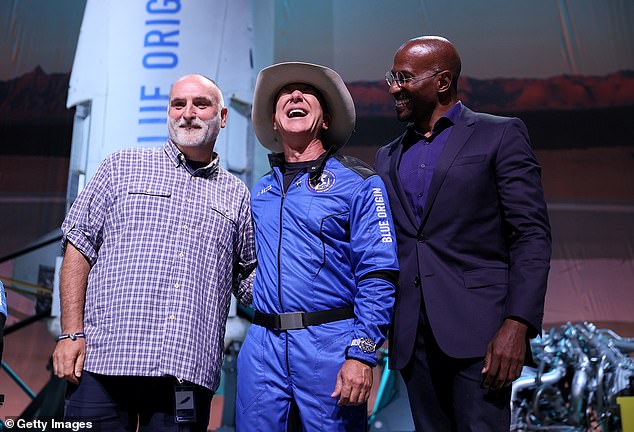 CNN’s Van Jones and celebrity chef Jose Andres were both on hand to accept their $100 million, which was announced at the conclusion of Bezos’ space launch press conference

Bezos noted that the two men can choose to donate the money to whatever charities they choose, including their own.

Jones’ small non-profit had a total of $2.5 million in assets as of 2019, according to the latest available tax records.

As he accepted the award, an emotional Jones said: ‘Sometimes dreams come true’ and that ‘the headlines around the world should be anything is possible if you believe’.

‘Lauren and Jeff don’t do nothing small – they just don’t do it. They dream big, they love big, they bet big. You bet on me and I appreciate it,’ he said, while mentioning Bezos’ girlfriend Lauren Sanchez.

Jones went on to gush over Bezos, saying the billionaire had lifted ‘the ceiling off of people’s dreams of humanity’.

‘That’s an important thing. Don’t be mad about it. When you see somebody reaching for the heavens, be glad, because a lot more heaven is up there to reach for. And we can do that together,’ Jones said. 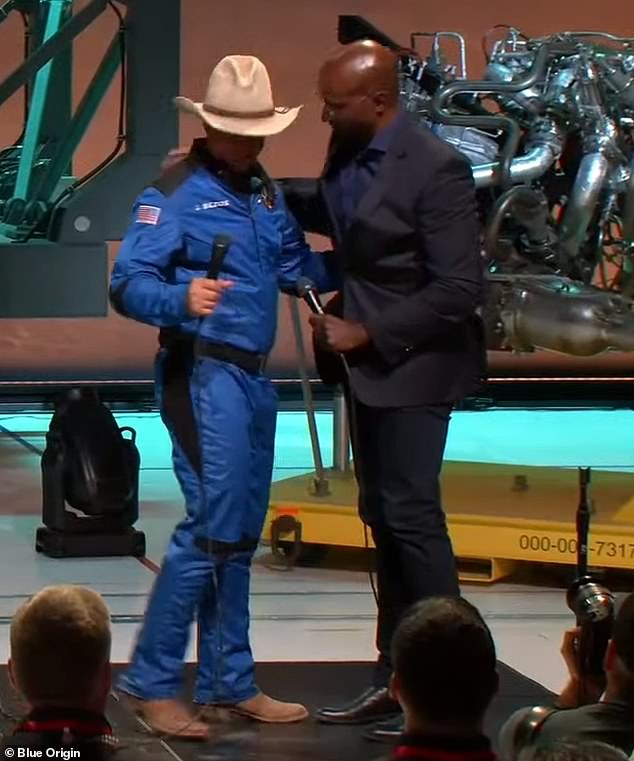 Jones went on to gush over Bezos, saying the billionaire (pictured above together) had lifted ‘the ceiling off of people’s dreams of humanity’

Jones revealed that Bezos had called him over the weekend to inform him of the award.

‘He said that he thought that my attempts to try to bring people together across party lines, across racial lines had been inspiring, and can I use some more support,’ Jones said.

‘I really didn’t know what to say.

‘This country is unbelievable what people are doing, and how much heart they have and how much love they have. They don’t care about these things we divide over sometime and they need more support. If we can connect them with more resources, it is going to make a big difference.’

It is not clear how many Bezos plans to hand out. 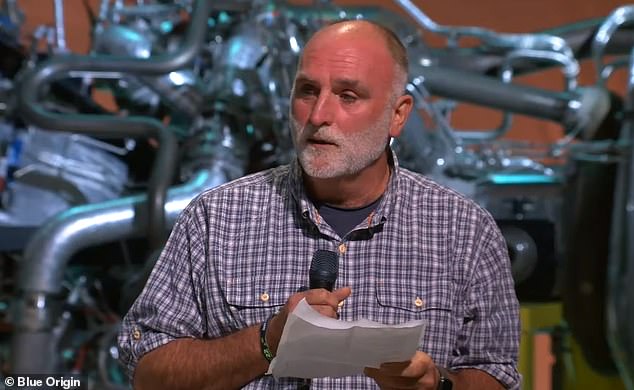 The second award was given to Spanish chef Jose Andres, who is founder of World Central Kitchen – a non-profit devoted to providing meals in the wake of natural disasters 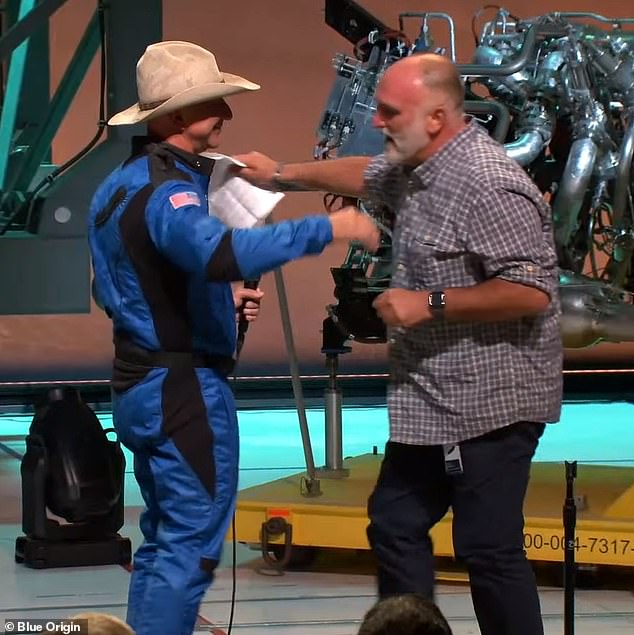 Bezos announced earlier this year that he was stepping down as Amazon CEO to devote more time to philanthropy.

He has been criticized in the past for only donating a small portion of his $160 billion fortune to philanthropic causes.

Meanwhile, his ex-wife, MacKenzie Scott, is renowned for having already donated a huge portion of her wealth since divorcing Bezos in 2019.

Scott – who helped create Amazon and is worth $60 billion – showed up Bezos earlier this year and appeared to take swipe at him for profiting during the COVID pandemic while millions of Americans and people around the world lost their jobs.

She revealed she had personally donated $4.1billion of her own fortune, adding that that the wealth of billionaires had increased amid the pandemic.

It was the latest example of how MacKenzie has publicly one-upped her ex with her giving.

She has given 9.4 percent of her wealth to charity in the last year alone but public records suggest he has donated $3.8billion over the last 10 years – 2 percent of his total wealth.