Has Jeff Bezos had a space-lift? Experts say billionaire’s dramatically plumped-up lips and smooth, tight cheeks are clear signs that he had cosmetic surgery before blasting into orbit on Amazon’s Blue Origin rocket

The wealthiest person in the world appeared different – mostly puffier – in recent photos and video taken before and after his $5.5billion joyride to space earlier this month.

It’s unknown if Bezos, 57, has undergone any cosmetic surgery. He hasn’t said anything publicly, and there’s been no official statements from Amazon or his media relations team.

Nevertheless, it’s caught the interest of some, including Dr. Corey L. Hartman, a dermatologist in Birmingham, Alabama, who told the Daily Beast, ‘How can you not be obsessed [with how Bezos looks]? It’s such a drastic change.’

‘He’s an easy target,’ Dr. Hartman told the Daily Beast. ‘Clearly he does not care because to me it looks like to me that he went and got his very obvious filler and injectables done right before he burst into the spotlight with this trip into space.’ 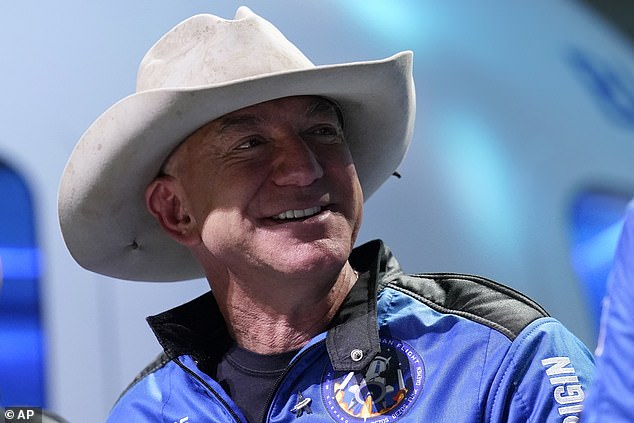 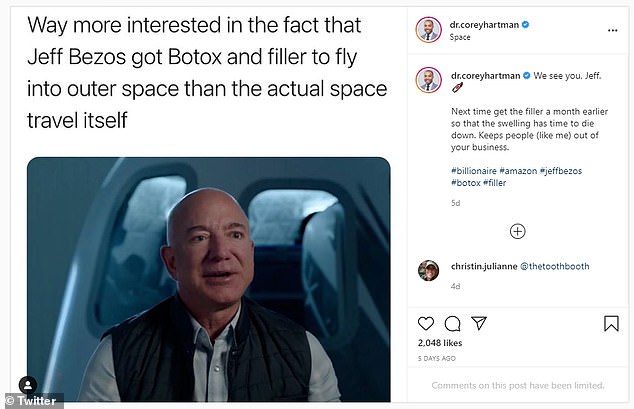 Hartman posted a photo of Bezos, who is worth an estimated $192 billion, on Instagram last week and said, ‘We see you, Jeff. Next time get the filler a month earlier so that the swelling has time to die down. Keeps people (like me) out of your business.’

Hartman did stress that he doesn’t want to stigmatize cosmetic surgery, especially among men.

‘More men who are into this should go for it,’ he said. ‘So, good for Bezos for stepping out and not being afraid to go for it.’

Corey Kindberg, a brand strategist, said: ‘I don’t necessarily think people care that he [might have] had work done. I feel like we’ve moved past the stigma of getting injections.

‘I definitely had more of a visceral reaction to Jeff using filler—if he has used it. You just think, someone with this kind of money, could afford to have the best filler in the world.

‘To me, he could have gold melted down and injected into his face. It’s just kind of shocking to see that, if he has had it, no matter how rich you are, you could still get bad filler.’

Bezos’ girlfriend Lauren Sanchez, 51, also sports an extremely youthful appearance, although it is unclear if she may have suggested a cosmetic doctor for her partner to visit.

Bezos is unlikely to be bothered by criticism of his appearance, having previously weathered gossip over his divorce from ex-wife MacKenzie, subsequent relationship with Sanchez, and criticism over labor practices at Amazon, which also stands accused of destroying smaller businesses. 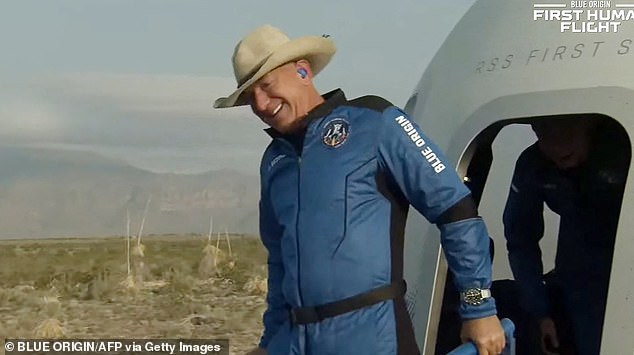 This still image taken from video by Blue Origin shows Jeff Bezos(R after Blue Origin’s reusable New Shepard craft capsule returned from space, safely landing on July 20, 2021, in Van Horn, Texas. – Blue Origin’s first crewed mission is an 11-minute flight from west Texas to an altitude of 65 miles, and back again, to coincide with the 52nd anniversary of the first Moon landing