Jeff Goldblum His best and his weirdest is yet to come, he feels

Jeff Goldblum is a weirdo. An impossibly tall, hyper-verbal beanpole. Definitely not a Hollywood leading man. And he would not disagree with you. ‘Has anyone ever given me advice to be less quirky? Never.’

And yet that ‘quirk’ has led to him becoming the very thing he shouldn’t be – a star. Independence Day (Goldblum plays a madcap scientist who saves the world), Jurassic Park (a mathematician-cum-rock star) and last year’s mega-hit Thor: Ragnarok (silver-lipsticked megalomaniac) have all benefitted from his idiosyncratic style and offbeat delivery. An eccentric sex symbol, he’s Hollywood’s go-to guy for weirdness.

It was even there at the very beginning. His first role was a bit-part in Michael Winner’s 1974 vigilante movie, Death Wish, playing ‘Freak No 1’. It set the tone to come. ‘I knew I was a little odd. But I didn’t only want to be Mr Weirdo. I wanted to have parts available to me that were romantic. So I course-corrected and made adjustments as I surfed the whole marketplace.’ Films like The Tall Guy, with Emma Thompson, saw to that – but even there he played a ‘dorky’ character.

Jeff Goldblum at the Cafe Carlyle in New York, with his jazz band, the Mildred Snitzer Orchestra.

When we meet in a swish Berlin hotel, he’s dressed in black loafers, a navy polo shirt and a powder-blue suit, fresh from a photo-shoot. ‘I’m a little dolled up,’ he says. It’s no wonder he’s still in demand. He speaks like a guru, in odd sentences. His friends even call him Buddha.

His latest movie, Wes Anderson’s Isle Of Dogs, is a decidedly quirky stop-motion animated film. He voices Duke, a canine exiled on a Japanese island. The for-adults humour is pure Goldblum. ‘If I had nothing to do with this and I was just showing up, I would eat it up with a spoon,’ he says.

Even in his private life, Goldblum is unconventional. After divorcing his first wife, actress Patricia Gaul, in 1986, he married his second, Geena Davis, his co-star from The Fly and Earth Girls Are Easy, a year later on a whim while driving through Las Vegas. The union lasted just three years. He calls his relationships with women ‘a mysterious course of study’ and at 65, Goldblum is a father for the first time – with his third wife, former Olympic gymnast Emilie Livingston, 30 years his junior. ‘I’m just a humble student at it, an early-stage practitioner,’ he says of parenthood. ‘Charlie Ocean is now two-and-a-half. And River Joe is ten months. I’m crazy about them.’ 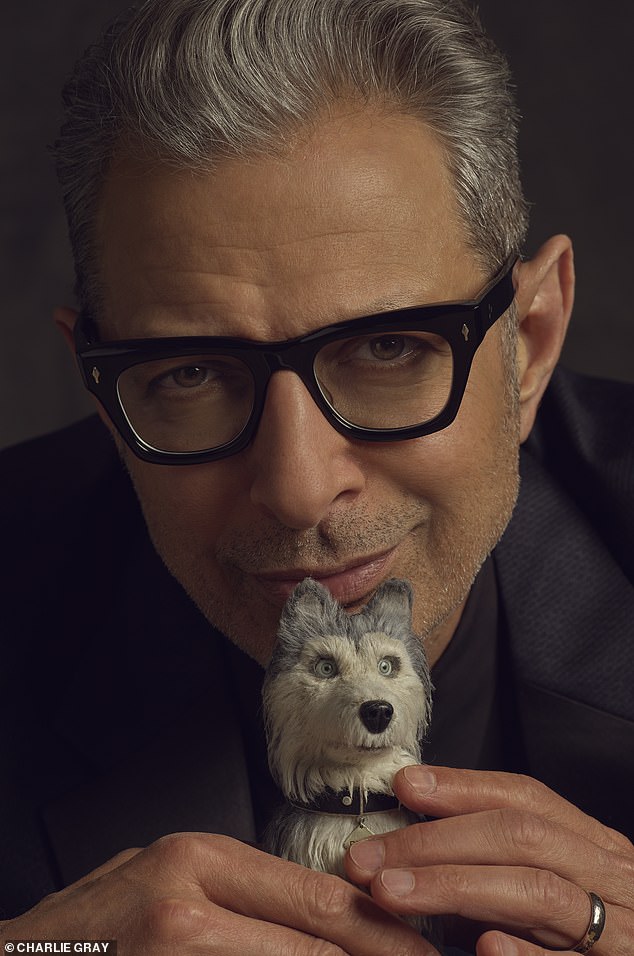 His latest movie, Wes Anderson’s Isle Of Dogs, is a decidedly quirky stop-motion animated film. He voices Duke, a canine exiled on a Japanese island

He once said about having children: ‘You have to be in love with the idea to do it, and I guess I never was.’ What changed? ‘Emilie. Her. It’s enhanced my appreciation of her.’ And so he has thrown himself into it. ‘I’m disciplined, I make sure I am in bed by 9.30 so we can both wake them up at seven. I’m a stickler.’

Goldblum regularly plays jazz with his band, The Mildred Snitzer Orchestra, and he needs this routine to help fit in his practice. ‘I get up at 5.30 or 6, make sure I play my piano for 45 minutes, sing a little bit, work out in my gym upstairs, work on my acting, get all that done. Do my grooming such as it is, and then get going. My energy is fed by it, my life is enhanced by it, and so far so good.’

This summer he’s back in his most famous role, mathematician Dr Ian Malcolm, for Jurassic World: Fallen Kingdom. ‘I had a good time with those movies,’ he says. ‘In the original book that Michael Crichton wrote, Malcolm’s a philosopher-fool scientist.’ 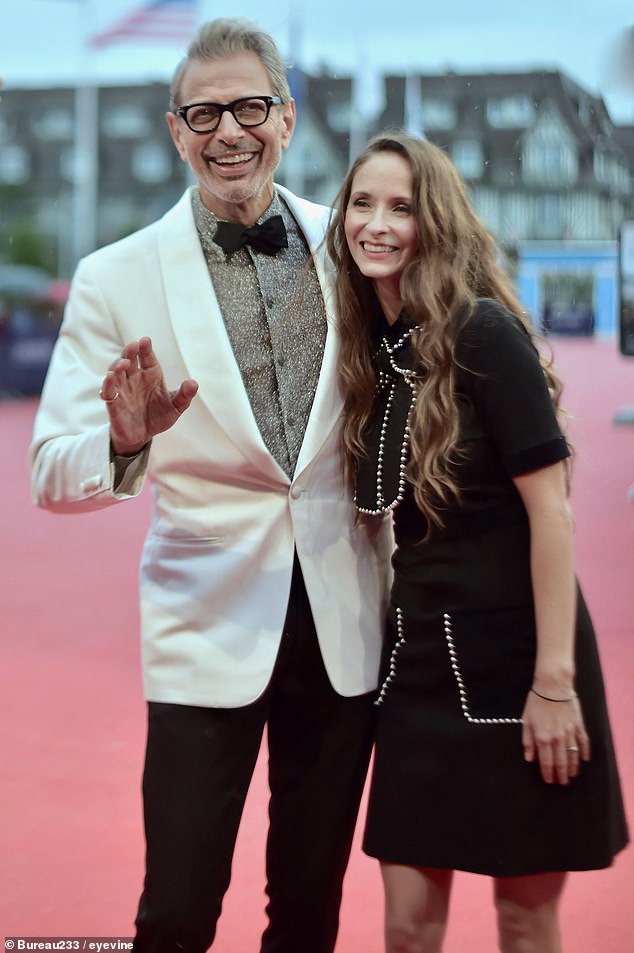 He’s even brought his own brand of oddness to advertising (invading a family Christmas to promote Currys PC World). Fortunately, he does it all with a smile. ‘I like to laugh a lot. I like to try to be funny,’ he says. ‘I see now round my kids, I like to try to make them laugh.’

As a boy he’d write ‘Please God, let me be an actor’ on the glass door every time he took a shower. After bit parts in Nashville and Annie Hall, he became a major star in 1986’s The Fly. In an age of charisma-free Hollywood hunks, he flourished and continues to do so. ‘Thank goodness. Miraculously it’s happened or continues to happen in a way that allows me to feel like a late bloomer,’ he says. His best and his weirdest is yet to come, he feels.

‘I’m more interested than ever, enjoying it more than ever.’

‘Isle Of Dogs’ is in cinemas now