The sketch begins with White House Press Secretary Sarah Huckabee Sanders going to the Department of Justice and looking for Sessions.

Sesions is seen climbing out from underneath the desk. 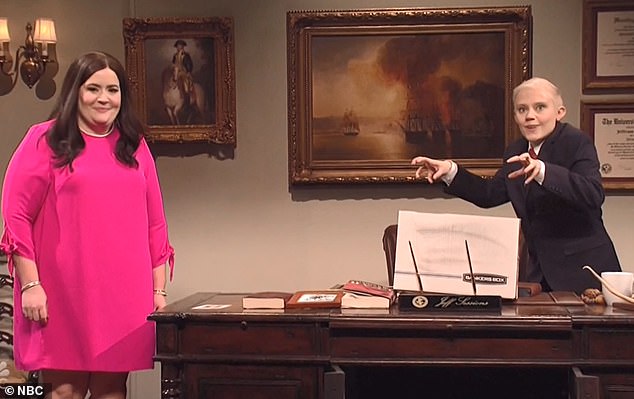 Sesions is seen climbing out from underneath the desk 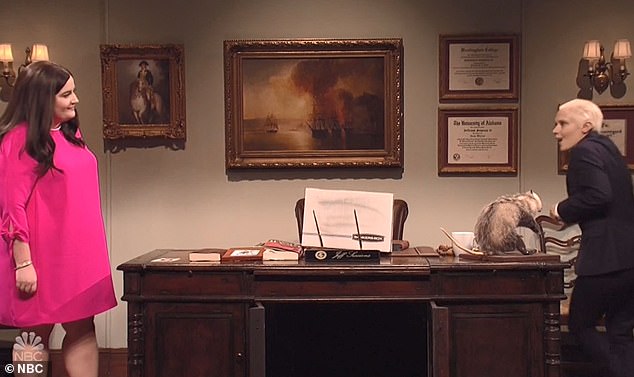 ‘Oh, boy, you got me,’ Sessions tells Sanders. ‘I was just hiding out hoping to give the new attorney general a real scare’

‘Oh, boy, you got me,’ Sessions tells Sanders.

‘I was just hiding out hoping to give the new attorney general a real scare.’

Sessions was fired from the post by President Donald Trump, who elevated his former chief of staff, Matthew Whitaker, to acting Attorney General.

‘I know,’ a dejected Sessions says.

‘I don’t understand how Mr. Trump could replace me with Matt Whitaker.

‘He’s just a city businessman with no experience who’s blindly loyal to Donald Trump…OK, hearing it out loud that makes sense.’

‘I’m sorry it has to end this way,’ Sanders tells Sessions. ‘We’re gonna need you to clear out this desk.’

‘Luckily I still got the box I was born in,’ Sessions says while wiping away a tear.

‘I’m sorry, I promised myself I wasn’t going to cry,’ the fired Attorney General says. ‘It’ll signal weakness and a hawk is going to come and grab me.’

Sessions then hands over his ‘White House ID.’ It shows Sessions with demonic looking eyes.

Sanders then exits the room to give Sessions some moments alone before he leaves.

Sessions reaches out to grab Sanders as she leaves, but to no avail.

‘Goodbye office,’ Sessions says as melancholy music begins to play in the background.

‘We sure did have some good times here during my almost 16 months as the Attorney General,’ Sessions says.

He then holds up a copy of his Bible and says: ‘I testified a lot of bad things with this book.’

Sessions then holds up a picture of his ‘family tree’ – which is really a tree that was his family’s home.

‘That was my room,’ Sessions says as he points to one of the branches.

He then holds up a copy of Fear, the book by famed reporter Bob Woodward.

Sessions points to the page in the book ‘where the President calls me mentally retarded.’

He then holds up a trophy for winning ‘the NAACP’s first ironic award.’

Vice President Mike Pence, played by Beck Bennett, then walks in and asks Sessions if he’s going to be okay.

He then shows Pence his ‘cute mug’ which has a Confederate flag and the phrase: ‘It’s not about hatred. It’s about heritage.’

Sessions then pulls out a ‘second secret mug’ inside which reads: ‘J.K. It is about hatred.’

Sessions then wonders why he was given the axe.

‘I heard the words “gays” and “cages” and I went somewhere crazy,’ Pence says. ‘And my Apple Watch says I’m having a heart attack.’

Pence then leaves and Sessions once again reaches out to try to grab him, but to no avail.

Sessions then continues showing office mementos that he is packing up prior to his departure.

‘A letter from Coretta Scott King calling me a “sonna b****”,’ he says as he holds up the framed letter.

Sessions also shows the keys he uses to ‘get Mr. Trump’s attention during meetings.’

At this point, Eric and Donald Trump Jr walk in. Eric is played by Alex Moffat and Don Jr is played by Mikey Day.

‘Are we gonna get some penis?’ Eric says.

‘That means you could go to jail,’ Don Jr tells his brother, who adds: ‘Where you could get some penis.’

Eric then shows Sessions ‘a picture for your bye bye.’

‘Dad helped him with it,’ Don Jr says.

The picture shows a turkey in the shape of a hand with the middle finger extended.

The Trump boys then depart, leaving Sessions alone once again.

Sessions once again goes into his reminiscent mode, talking about how he’s going to miss his colleagues at the Justice Department, particularly those with whom he chat around the water cooler.

Sessions then pulls out his ‘water cooler’ – which is a water bottle used in hamster cages.

‘Well, I really did my best Mr. Trump,’ Sessions says, holding up a photo of Trump as spoofed by Alec Baldwin.

Baldwin did not make an appearance on the show. He was arrested last week and charged with assault and harassment after an altercation over a parking spot in New York City.

As Sessions holds the Trump portrait, he begins to sing Adele’s Someone Like You. During his singing, clips of Trump and Sessions in skits begins to play in a thought cloud.

As Sessions is prepared to leave the office for good, in walks Special Counsel Robert Mueller, portrayed by Robert De Niro.

Sessions then gets nervous.

‘You can’t arrest me, I quit sir,’ Sessions tells him.

He then asks Mueller for ‘a little taste of what’s in the report.’

Recent reports this week indicate that Mueller is working on the final report in the Russia investigation.

Mueller says he can’t do that, though he does acknowledge that Sessions is mentioned ‘a little bit.’

‘What about the President?’ Sessions asks.

Mueller then hands Sessions a piece of toilet paper from the bottom of Trump’s shoe.

Earlier this year, Trump was photographed boarding Air Force One with toilet paper stuck to his shoe.

Sessions then tells Mueller that ‘with this new Attorney General, you might be out of a job soon, too.’

Sessions and Mueller then finish the duet.