Epstein, shown in his July 8 mug shot, pleaded not guilty on Monday

As Jeffrey Epstein stares down the barrel of 45 years behind bars on sex trafficking and sexual assault charges, questions have turned to whether the notoriously well-connected pedophile will drag any of his well-heeled friends and acquaintances down with him.

Epstein has been charged with sexually assault and sex trafficking in reference to three underage girls between 2002 and 2005. The alleged crimes took place at his mansions in New York City and Palm Beach.

The 66-year-old is currently facing 45 years in prison if convicted of both counts. He pleaded not guilty on Monday.

Julie Brown, The Miami Herald’s investigative reporter, who spearheaded the newspaper’s investigation into Epstein which New York prosecutors say helped them bring their case,  believes there are ‘important and powerful people’ who will now worry they may be brought down too.

Brown claims to have seen the names of prominent people on ‘message pads’ where they would tell Epstein which hotels they were staying in.

On Monday, she told MSNBC she saw no other reason for them to give him the information than for him to send one of the underage girls he had allegedly solicited under the pretense of hiring them for a massage.

No one else is named in the newly unsealed indictment against Epstein and prosecutors have refused to comment on who, if anyone else, will be charged.

It is now however a possibility that Epstein – who avoided federal prison on other, charges in 2007 – may ‘name names’ in an effort to lessen the sentence he will face if convicted.

‘We don’t know how deep this went, how far reaching it went in government but there’s been a lot of people that I could see their names on these message pads, as part of the evidence, these message pads where they would call Epstein and leave messages such as, “Oh, I’m at this hotel”.

‘Why do you do that except that you’re expecting him perhaps to send a girl to visit you at your hotel? So there’s probably quite a few powerful and important people who are sweating it out right now,’ Brown said.

She did not give any names, but continued: ‘We’ll have to wait and see whether Epstein’s going to name names or what kind of information he’s going to try trade in order to maybe get out of this one way or lower his culpability.’

Epstein’s extensive and surprising list of social acquaintances has been well-documented.

In 2009, a former employee was arrested for stealing and trying to sell his ‘little black book’ which was described as the ‘Holy Grail’ of Hollywood and political contacts. 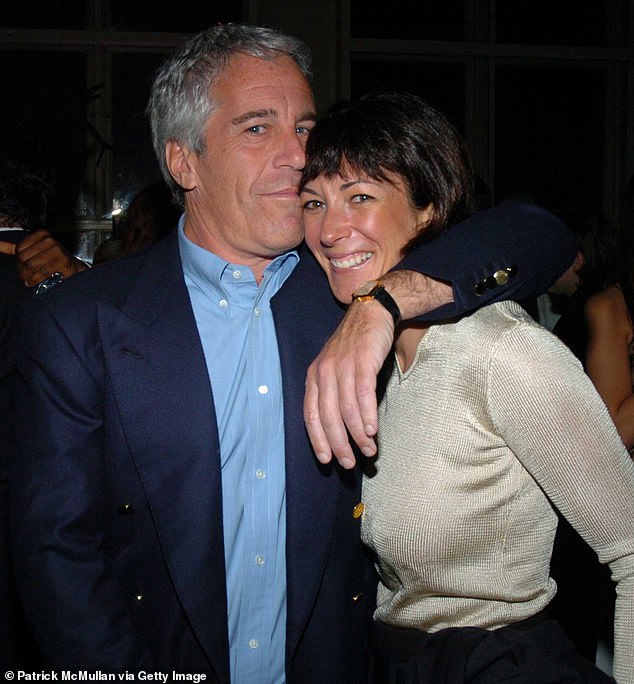 The name most commonly associated with Epstein’s alleged crimes is Ghislaine Maxwell. The British socialite is his former girlfriend. Victims have claims in civil lawsuits that she operated like his ‘madam’. She has not been arrested or charged 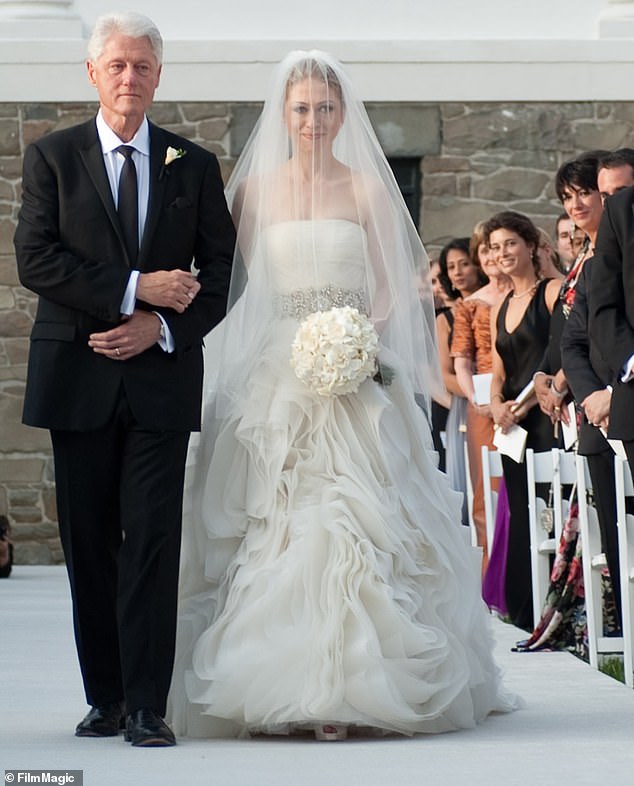 Ghislaine was in attendance at Chelsea Clinton’s 2010 wedding. Epstein, who had Bill Clinton on his plane numerous times, had just completed a loosely-monitored stint in a Florida detention center after pleading guilty to soliciting a minor for sex in a sweetheart deal at the time and her association to him was well known

Top of his list of associates is the British socialite Ghislaine Maxwell who has been named in civil lawsuits launched against him by women who say they are his victims.

They described Maxwell as his ‘madam’ and accused her supplying young girls to him and others.

Maxwell is the daughter of the late British newspaper executive Robert Maxwell. She and Epstein dated but split in the 1990s. They remained friends for years afterwards.

In a 2011 profile about how he was welcomed back into society despite being convicted of soliciting sex with young girls, one unnamed insider said of Maxwell: ‘She’s a high-end ‘fixer’, and so what? No one in café society gives a damn that a 15-year-old girl gives massages. 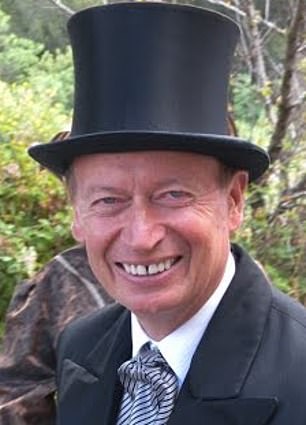 Jean Luc Brunel is the owner of MC2 modeling agency which Epstein formerly had a stake in. Victims claimed Epstein used the modeling agency to find girls. Brunel has in the past denied having any involvement in his alleged crimes

‘She gets people into parties and runs around for a lot of people.

‘If you’re Mike Huckabee it would matter but not if you’re Ghislaine Maxwell.’

Maxwell tried to keep the documents from a civil lawsuit launched by some of Epstein’s victims sealed but a judge decided last week to unseal them.

Virginia Giuffre Roberts, who previously spoke out claiming to have been held by Epstein as a ‘sex slave’, said Maxwell made her get bikini waxes to make her look prepubescent.

Maxwell publicly denied her claims and accused of her lying. Roberts sued her for defamation and the documents from that case are the ones due be unsealed.

Another former associate of is Jean Luc Brunel.

Brunel owned MC2 modeling agency which Epstein had a stake in and which Virginia Roberts, his ‘former sex slave’  claimed in court documents he used as a to find girls through.

Brunel angrily denied engaging in criminal acts after Roberts’ claims were made public.  She alleged that she was forced to have sex with him.

Alan Dershowitz, a renowned lawyer, was also named in Roberts’ lawsuit.She claimed she was trafficked by Epstein to have sex with Dershowitz, among other men.

Dershowitz, whose famous past clients include OJ Simpson, has furiously denied the claims and he is fighting for much of the record against Epstein to become unsealed in an effort to clear his name. 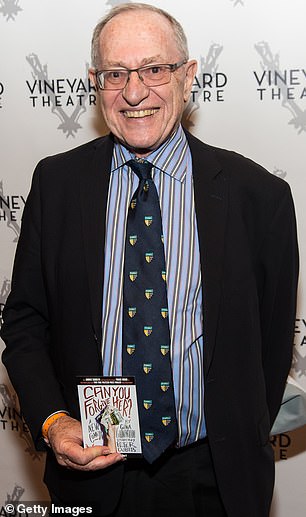 Ghislaine was present at Chelsea Clinton’s wedding in 2010, after Epstein’s first arrest on charges relating to having sex with minors.

On Monday, Brown said of Trump that Epstein emulated his modelling agency on the president’s and that they had ‘social relationships’.

Trump has not commented on the indictment or on Epstein’s previous conviction but his friendship with the billionaire is well-documented.

In 2002, he joked while being interviewed by a biographer: ‘I’ve known Jeff for 15 years. Terrific guy.

‘He’s a lot of fun to be with. It is even said that he likes beautiful women as much as I do, and many of them are on the younger side.

‘No doubt about it — Jeffrey enjoys his social life.’

Trump has since distanced himself from the billionaire. 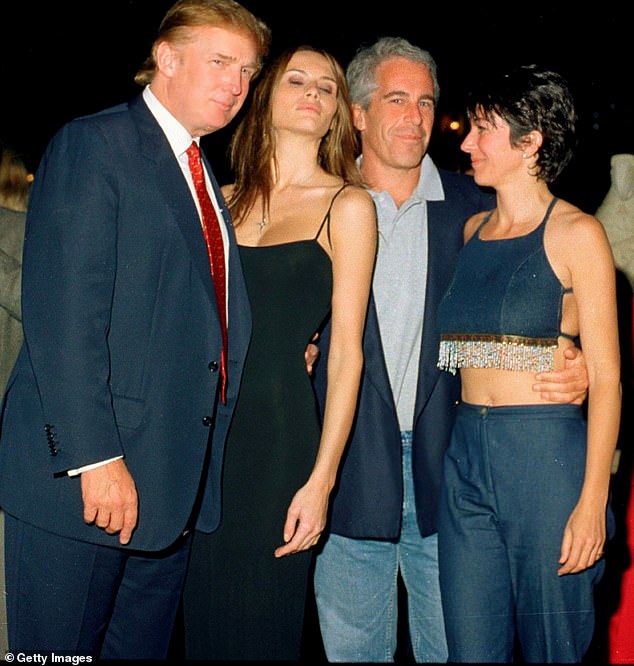 Epstein and Trump were friends before his first arrest and before Trump launched his political career. They are shown in 2000 with Melania and Ghislaine Maxwell at Mar-a-Lago 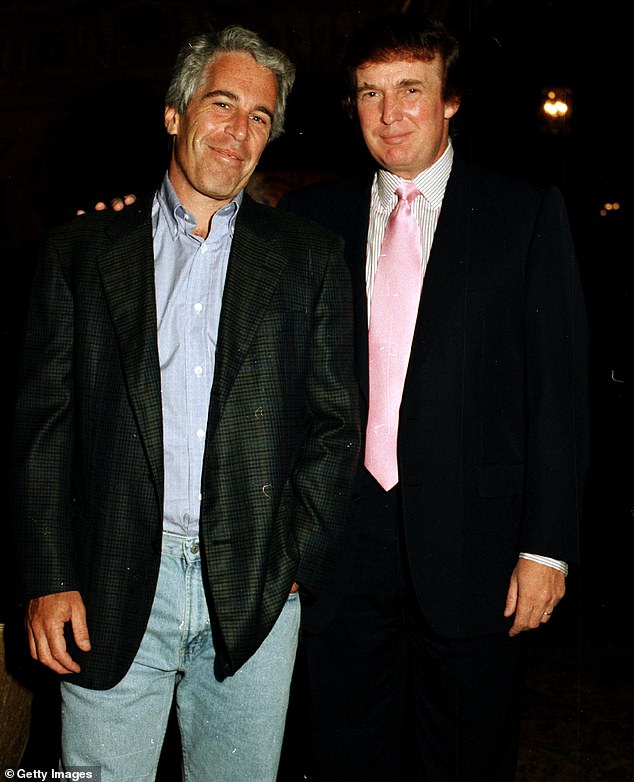 Whilst he was fond of Epstein in the early 2000s, Trump distanced himself later and even reportedly banned him from Mar-a-Lago for allegedly sexually assaulting an underage member of staff

He is said to have banned him from Mar-a-Lago for allegedly sexually attacking a member of staff then in 2009, while lawyers sought settlements for some of Epstein’s other victims, helped them by telling them he would help them with their case. 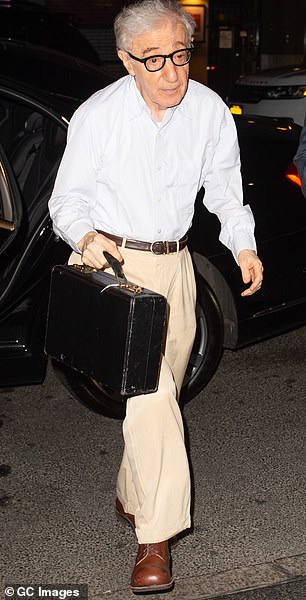 After his 2009 incarceration, Epstein was reportedly welcomed back into society by a host of stars including Woody Allen who himself has been accused of sexual abusing minors

‘I’ll give you as much time as you want. I’ll tell you what you need to know, and was very helpful, in the information that he gave, and gave no indication whatsoever that he was involved in anything untoward whatsoever, but had good information.

‘That checked out and that helped us and we didn’t have to take a deposition of him in 2009,’ lawyer Bradley Edwards said in a 2018 court filing.

After Epstein completed his 2009 custody agreement in a loosely guarded Florida detention center which he was allowed to leave every day to go to work, he was welcomed back into the fold of by a host of celebrities, politicians and world figures.

According to The Daily Beast who wrote about it at the time, Chelsea Handler, Katie Couric and Woody Allen attended a party at his Manhattan home.

He was also photographed in Central Park with Prince Andrew who he’d had a friendship with too. Andrew has severed ties to him since.