One of the young women accusing Jeffrey Epstein of sexual assault said that she was ordered to have plastic surgery by the pedophile.

Priscilla Doe, who lost her virginity when Epstein allegedly raped her, said in a court filing that Epstein dictated what she wore and how she looked during the six years she was under his rule – and to a startling degree.

‘[Priscilla] complied with these demands with the understanding, conveyed to her by Epstein, that she had no other choice.’

The complaint also details how Epstein would order Priscilla to pause sex acts just before he reached climax and then make business calls, doing this multiple times during some sessions.

Priscilla is one of the three women who has filed a lawsuit against the estate of Epstein, executors Richard Kahn and Darren Indyke, and eight businesses linked to the deceased pedophile.

She was flown around the country at Epstein’s demand, and also claims she was forced into performing sexual acts ad massages on his friends and associates.

Most of her efforts however were focused on the pedophile, who she claims raped her while he was ironing out his sweetheart deal.

She also details how Epstein spent a good portion of the time during his massages dealing with business matters.

‘While [Priscilla] was giving sexual massages, Jeffrey Epstein would always answer the phone if someone called,’ states the complaint.

The complaint notes that Priscilla does not want to name those individuals ‘out of fear of retaliation.’ 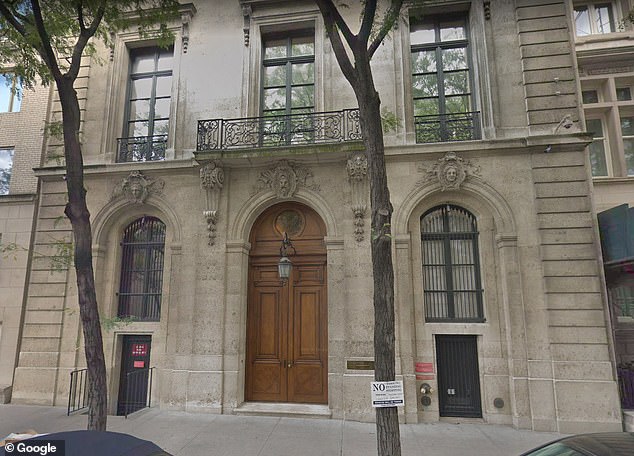 Prison: Priscilla Doe also claims that Epstein dictated everything from what clothes she could wear to the color of her underwear (Epstein’s home in NYC)

Epstein would also allegedly deal with business matters in the middle of sex acts.

‘There were also times when Jeffrey Epstein, during sexual massages, would be on the verge of ejaculating and would stop in order to make a phone call, at times saying that nearing sexual climax evoked certain important thoughts in Jeffrey Epstein’s mind,’ says the court filing.

‘Jeffrey Epstein would then take or initiate up to four business calls during any particular sexual massage.’

There was also a violent side to Epstein as well according to Priscilla, who details how she was attacked after sharing a photo online.

‘The next morning, Jeffrey Epstein woke her while holding her wrists tightly. He was in a state of great anger. His laptop computer was open. He began questioning her, stating, “Why did you make this post? Who has read it? What have you told them?” read the complaint.

This was while Epstein was being investigated by the FBI and police in Palm Beach, and as he was working out his sweetheart deal with prosecutors.

‘Jeffrey Epstein sent Plaintiff back to New York without paying her for any of the commercial sex acts she had engaged in with him on the island on a daily basis over the course of approximately one week,’m states the complaint.

‘Epstein, in a show of his anger and power, kicked Plaintiff out of her living quarters, essentially rendering her homeless overnight. At the same time, Epstein informed Plaintiff that she was forbidden to tell anyone about him or the sexual activities he was engaging in with her.’

Priscilla was punished when she later fell out of Epstein’;s favor three years later by allegedly being forced to wait on Woody Allen at a party