Jehovah’s Witness is sentenced to six years in Russian prison

A Jehovah’s Witness has been sentenced to six years in a Russian prison after the religious group was banned for ‘extremism’.

Danish citizen Dennis Christensen was jailed at a court in the southern Russian city of Oryol today despite insisting he had ‘never committed any criminal acts’.

He was the first person arrested under a 2017 ruling which outlawed the religious group, deeming them an ‘extremist organisation’.

The verdict could lead to jail terms for dozens more Jehovah’s Witnesses with another 90 cases waiting to come to trial across Russia.

Jailed: Danish citizen Dennis Christensen is handcuffed and escorted into a court in Oryol today, where he was jailed for six years for ‘extremism’

Christensen, who moved to southern Russia as an adult and is married to a Russian woman, was arrested in Oryol in May 2017.

In court today he said: ‘I hope that today is the day that Russia defends freedom of religion,’ but the court handed him a six-year jail term.

The 46-year-old was led past a mass of supporters by police officers following the verdict.

‘We deeply regret the conviction of Dennis Christensen – an innocent man who did not commit any real crime,’ said Yaroslav Sivulskiy, a spokesman for the Jehovah’s Witnesses in Russia.

‘It is sad that reading the Bible, preaching, and living a moral way of life is again a criminal offence in Russia,’ he added.

Amnesty International said in a statement: ‘The Russian authorities must immediately and unconditionally release Dennis Christensen.

‘Dennis Christensen has been arrested and prosecuted by the authorities simply for practicing his religion as Jehovah’s Witness.

His case is emblematic of the grave human rights violations including the rights to freedom of expression, peaceful assembly and religion in the country. 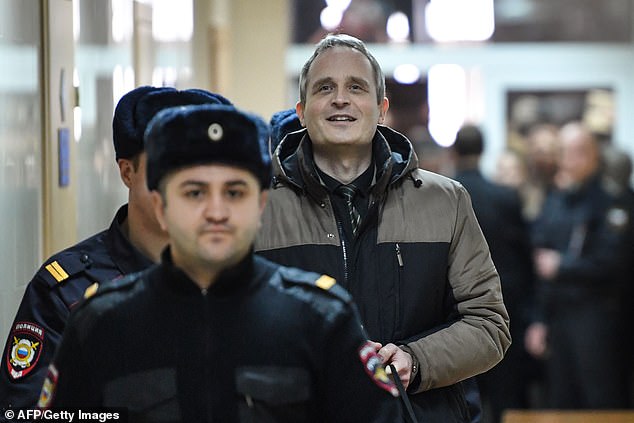 Convicted: Christensen, a Danish Jehovah’s Witness, is escorted into the courtroom to hear the verdict. He was the first person arrested after the group was banned in 2017 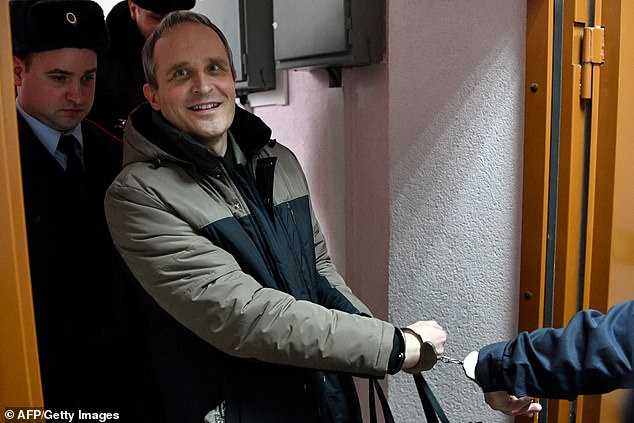 Accused: Christensen, who moved to southern Russia as an adult and is married to a Russian woman, was arrested in Oryol in May 2017, is escorted by police in Oryol today

The Russian authorities must halt persecution of estimated 175,000 Jehovah’s Witnesses who are simply peacefully exercising their right to freedom of religion.’

Since 2017 there has been an intensifying crackdown on Jehovah’s Witnesses, with around 90 criminal trials now pending in dozens of regions of Russia.

More than 20 properties belonging to the organisation or its members have been confiscated by law enforcement, its U.S.-based office said.

The 33-year-old leader of the Jehovah’s Witness organisation in Ivanovo, a city northeast of Moscow, was arrested last week on extremism charges.

The Jehovah’s Witnesses say they number more than 170,000 in Russia, a country of 144 million people where most are Orthodox Christians.

In a report last year, Human Rights Watch accused the Russian authorities of a ‘sweeping campaign’ of harassment and persecution against the movement.

In 2010, the European Court of Human Rights ruled that the dissolution six years earlier of the movement’s Moscow branch had violated the right to freedom of religion and association.

The powerful Russian Orthodox Church has spoken out against the group, with one church official branding it a ‘destructive sect’.