Iris Goldsmith’s heartbroken father today shared a poignant video made by his daughter as she chased a flock of starlings ahead of her funeral today.

Ben Goldsmith’s tribute to the 15-year-old came nine days after the quad bike accident that claimed her life at the family’s farm in North Brewham, Somerset.

In the short video schoolgirl Iris is audibly giddy and breathless as she runs towards the large flock of birds and exclaims: ‘I’m right by the starlings – I’ll get them to fly’.

And as the flock sweeps across a grey sky, probably at her family’s farm, she says joyfully: ‘Look how giant that is. I’m running right next to them’.

Her bereft father tweeted the short film today with the caption: ‘A child in love with nature, my Iris, alone with her phone, March 2015’.

This afternoon her divorced parents Mr Goldsmith, 38, and Kate Rothschild, 37, were joined by relatives including Iris’ aunt Jemima Khan and uncle Zac Goldsmith and friends at her private funeral in west London.

Earlier Jemima shared private photos of her niece in a touching tribute.

In an emotional Instagram post late last night, Jemima chose six pictures and wrote: ‘Tomorrow we say goodbye to my brilliant, beautiful niece Iris. My heart is breaking for Ben and Kate. I learned the appalling meaning of the words “inconsolable” and “helpless”…’

She went on to explain how she had found hope in Nick Cave’s words on the tragic death of his son and his wife Susie’s grief. 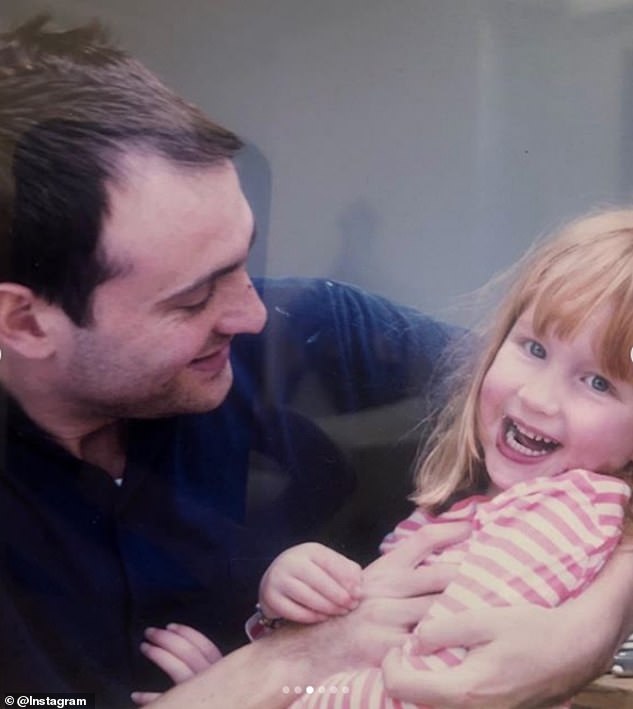 One of the adorable throwback photographs shows a smiley Iris wearing a stripey pink top in the arms of her millionaire financier father, Ben Goldsmith, 38 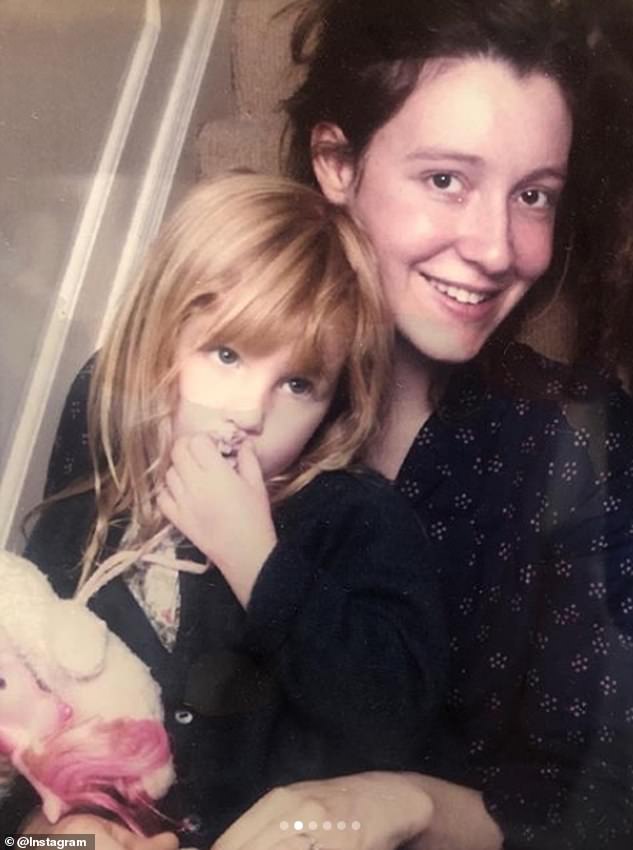 Jemima Khan, 45, has shared a touching tribute to her niece Iris, 15 (pictured with her mother Kate) on Instagram following her death. She was killed in a tragic quad bike accident on July 8 and her funeral is expected to take place today

In the emotional post, Jemima also addressed in ‘deep grief’ and the ‘inconsolable’ and encouraged that time will help to heal. Pictured, Jemima Khan at the Vanity Fair Oscar Party in Los Angeles on 26 Feb 2017

Alongside six adorable snaps of the fifteen-year-old, Jemima penned: ‘Tomorrow we say goodbye to my brilliant, beautiful niece Iris. My heart is breaking for Ben and Kate’

‘I have seen life lived in a darkened room, essentially a tomb, crumpled around a memory, as if to be dead herself somehow brought her closer to the spirit of her departed child,’ she quoted the singer, whose son Arthur, 15, died after falling from a cliff.

Cave said: ‘I learned the appalling meaning of the words “inconsolable” and “helpless” – and I never knew a person could cry for so long.

The selection of touching photographs includes a young Iris with a short blonde bob smiling alongside her father, and another of her grinning at the camera as she clutches a pigeon.

Another shows teenage Iris donning a green top as she looks wistfully into the distance while posing for a snap in front of a tree.

Jemima, the ex-wife of Imran Khan, finished her heartbreaking post by reaching out to those in ‘deep grief’ and to the ‘inconsolable.’

‘We want to say that, in spite of ourselves, life moves on,’ she wrote. ‘That in time we learn to absorb our loss, as a form of armouring, and that it can become our strength.’ 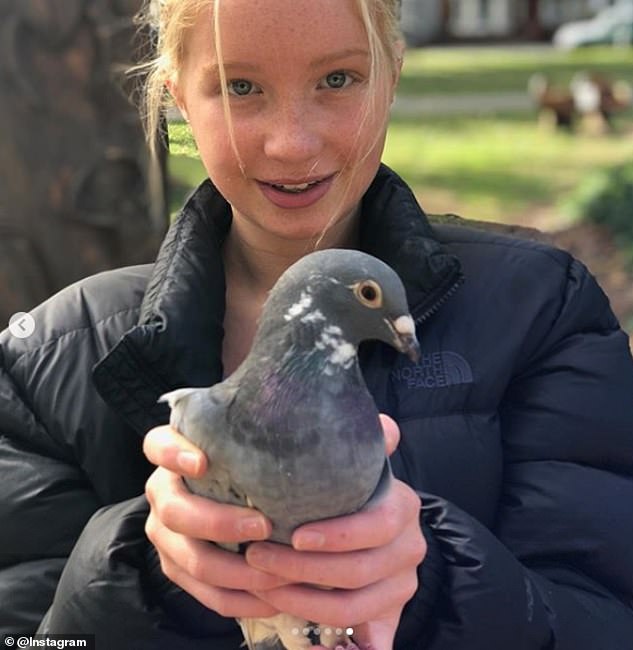 In another of the snaps, Iris, who can be seen wearing a puffer jacket with her hair tied back, grins at the camera as she holds a pigeon 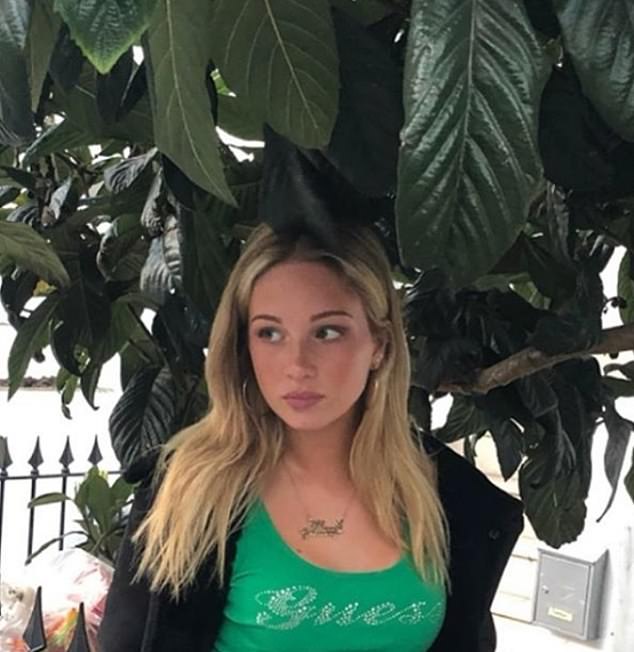 Donning a green top, another photograph shows Iris looking wistfully into the background as she poses alongside a tree

She added: ‘Finally, we want to say that even though there are still the deep and sudden weeps – the flash floods – they don’t assert the same hold on us anymore, for we know they pass, as do all things.’

Actor Will Kemp commented: ‘So, so sorry to hear such unbelievably sad news. Please send Ben. Kate and family our biggest love and condolences. Can’t even imagine what you all are going through,’ while Nigella Lawson simply sent a love heart emoji.

Meanwhile, Georgia Toffolo added: ‘My heart is breaking for your family. Sending you so much strength and love for your unbearable loss. Beautiful words and girl.’ 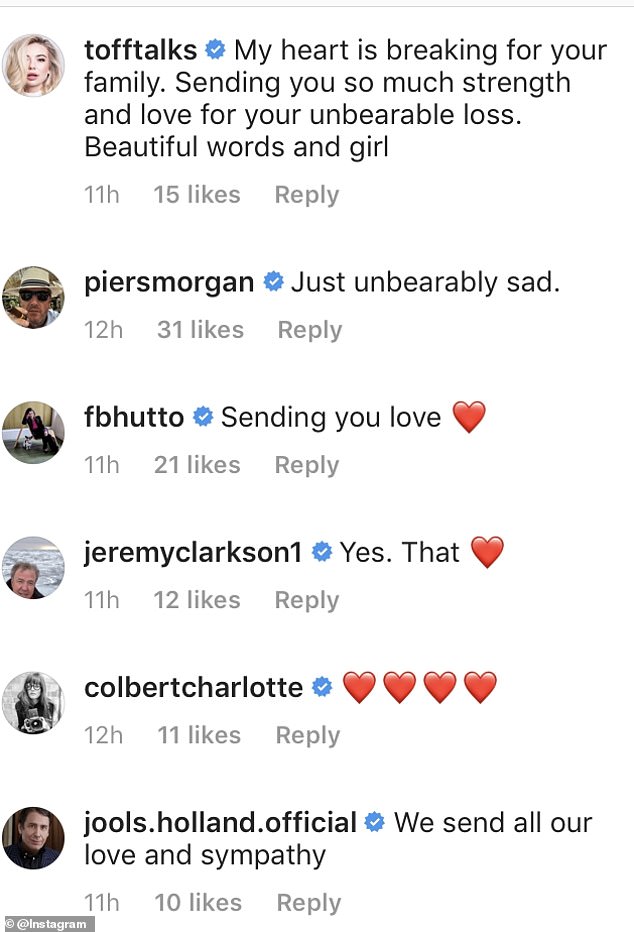 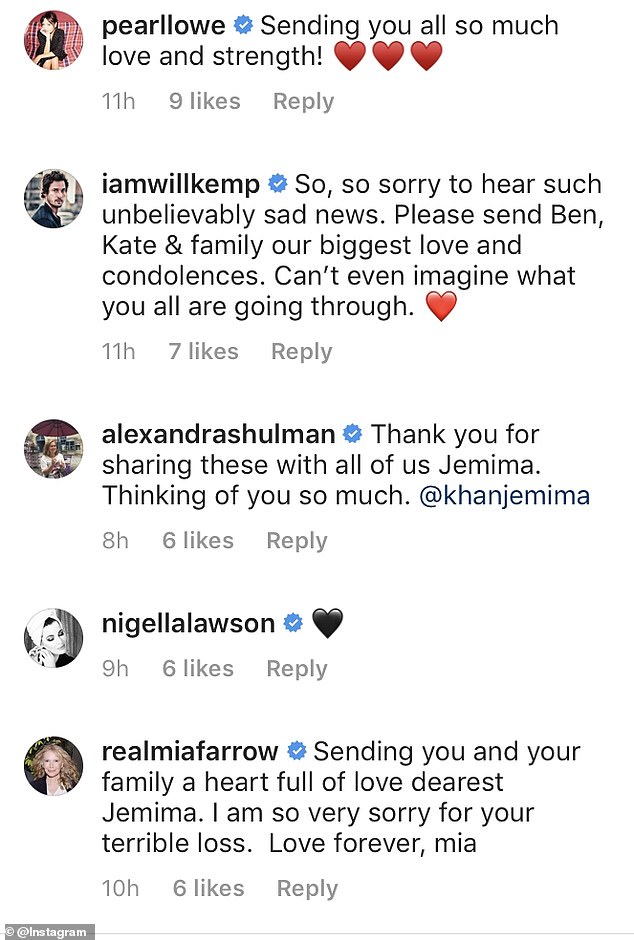 Following the accident last week, ambulance crews were called to Ben – the younger brother of Jemima –  and Kate’s home.

Just yesterday, the devastated father, who described his daughter as ‘beautiful, charming, intelligent,’ shared a photo of graffiti paying tribute to his teenage daughter following her death last week.

He revealed a friend had sent him a picture of street art in west London reading ‘Rest easy Iris’ alongside a love heart, and shared the image on Twitter.

Meanwhile an inquest into her death will be opened on Friday at Taunton Coroner’s Court in Somerset.

The bereaved parent last week wrote a heart-wrenching message on Twitter pleading with God for his daughter to be returned to him.

He wrote: ‘Dear God, please can I have my beautiful, brilliant, kind little girl back, please God. 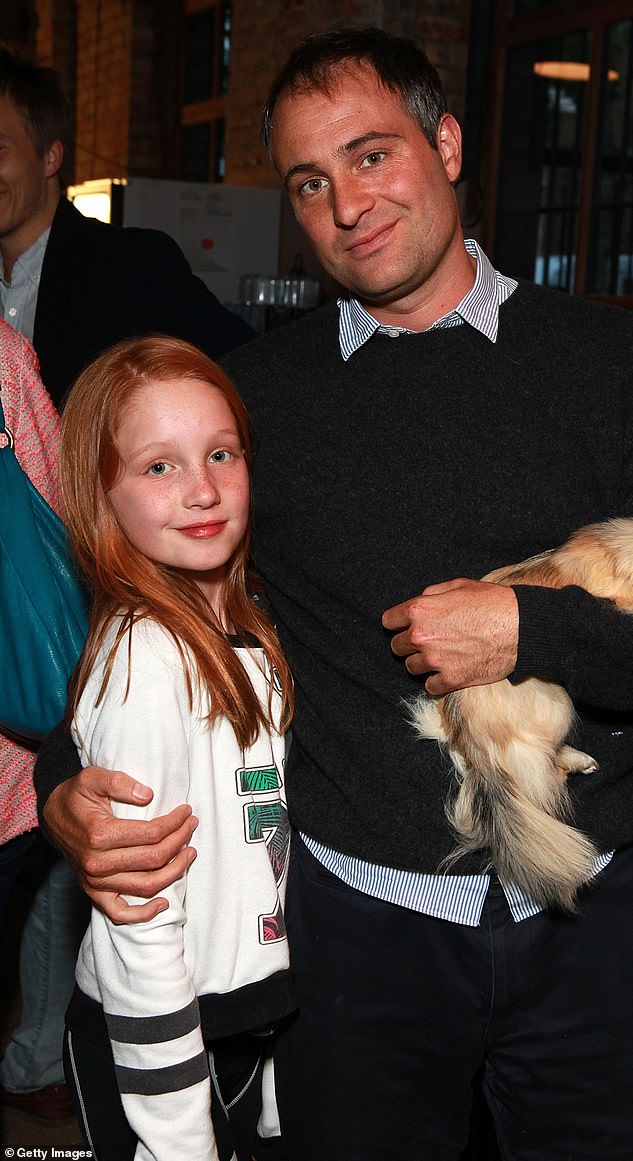 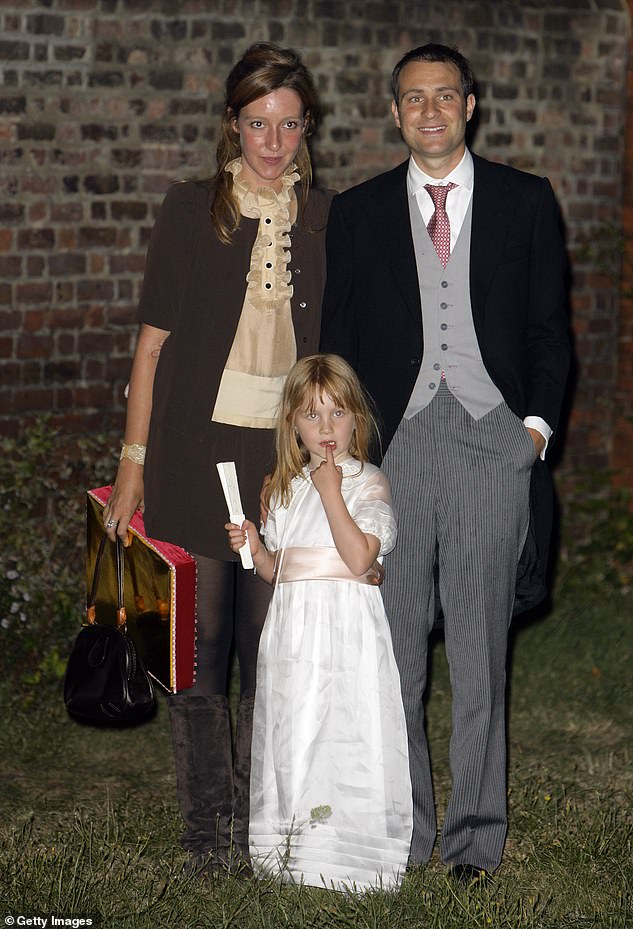 Iris Annabel (pictured with her mother and father) was heir to two of Britain’s, and the world’s, most powerful dynasties, the Goldsmith and Rothschild families – as the daughter of Ben and his ex-wife Kate Rothschild