Jenna Bush Hager has recalled the heartbreaking conversation she had with her late grandfather, former President George H.W. Bush, after his wife Barbara’s death, saying that he ultimately couldn’t live without her.

The Today co-host opened up about her grandparents’ undying love for each other on Thursday’s show after she and Hoda Kotb shared a story about a 92-year-old man and 82-year-old woman who got married after their spouses passed away.

‘One of the most profound moments of my life was when I was in Maine the summer after my grandma died with my grandpa,’ Jenna, 39, said. ‘And we were just sitting at the dinner table, and he said, “Will I always miss her this much?” Asked me!’ 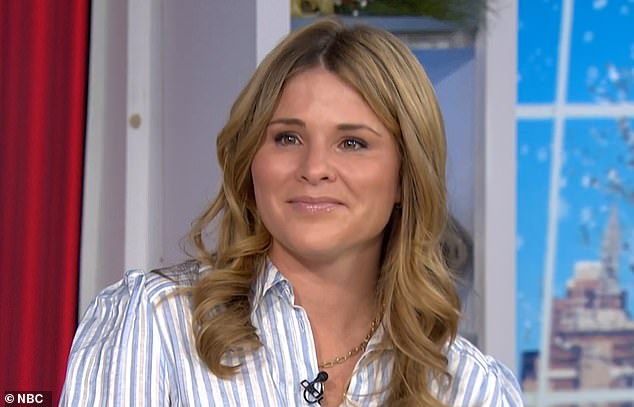 Looking back: Jenna Bush Hager recalled on the Today show the heartbreaking conversation she had with her late grandfather George H.W. Bush after his wife Barbara’s death 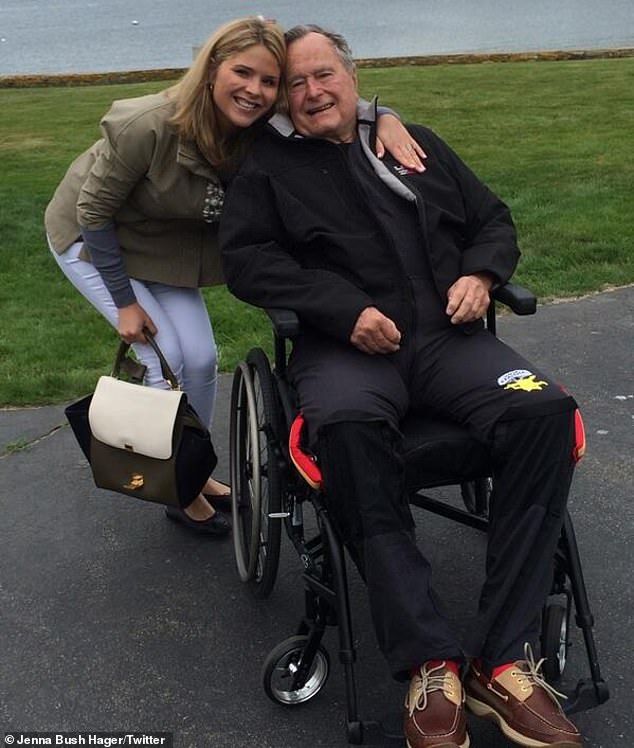 Heart-wrenching question: They were spending the summer in Maine together when the former commander and chief asked Jenna: ‘Will I always miss her this much?’

‘And I said, “I don’t know, Gampy.” He didn’t live that much longer ’cause I don’t think he could without her,’ she admitted. ‘But I just thought that that was such a beautiful thing, and also a heartbreaking thing, because I couldn’t answer the question.’

‘A lot of people go through their lives and have nothing even close to that,’ Hoda said of the deep love Jenna’s grandparents had for each other. ‘They have love, but not like that, not the kind they can’t live without.’

In the book Pearls of Wisdom: Little Pieces of Advice (That Go a Long Way), which was released earlier this year, George H.W.’s personal aide Evan Sisley recalled how the former president and first lady ‘were still playful and liked to poke fun at each other even in their nineties.’ 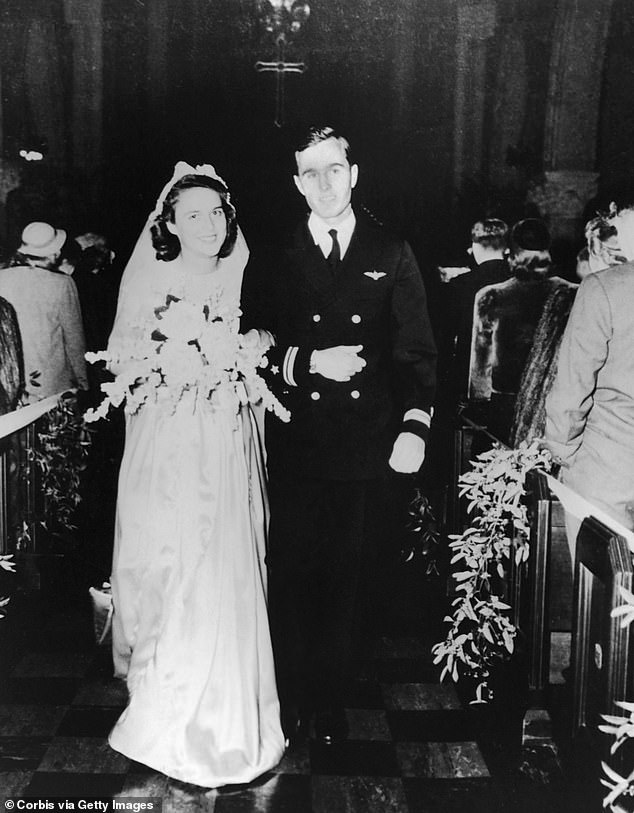 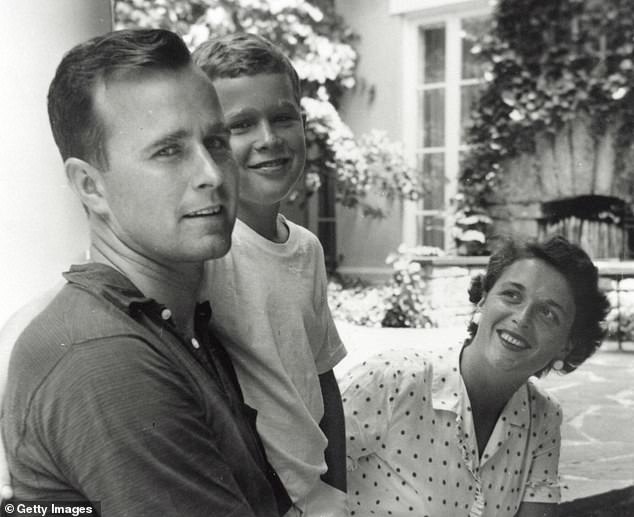 Look of love: George H.W. and Barbara are pictured with their son, Jenna’s father George W. Bush, when he was a child in 1955

He also shared an exchange the couple had the day before Barbara’s death.

‘Not a grand statement, but perfect. They spent a life protecting and devoted to each other. They were secure in their faith, and they knew where the other was heading. They just wanted each other to know that it was going to be okay.’

Last month, a few weeks before the two-year anniversary of her grandfather’s death, Jenna got emotional while opening up about the heartfelt letter the former president wrote to his successor, Democrat Bill Clinton, after losing the 1992 election as an incumbent.

‘[My grandfather] started this tradition where the outgoing president would write a letter and leave it in the desk of the Oval Office so when the new president would come on the first day, he would open his desk and there it would be,’ a teary Jenna said on the Today show. 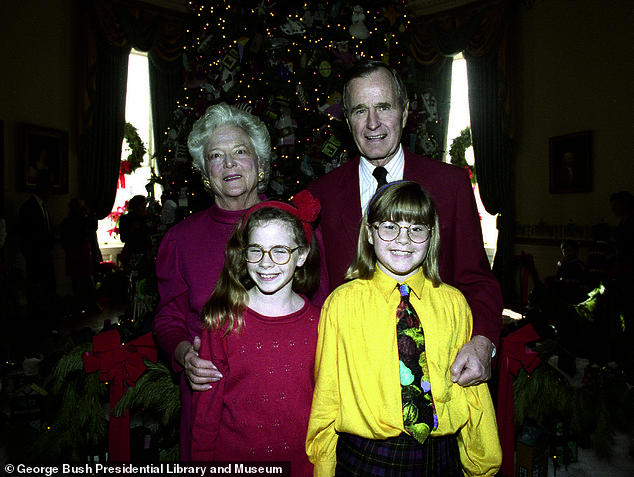 Memories: Jenna and her twin sister Barbara spent a great deal of time with their grandparents at the White House 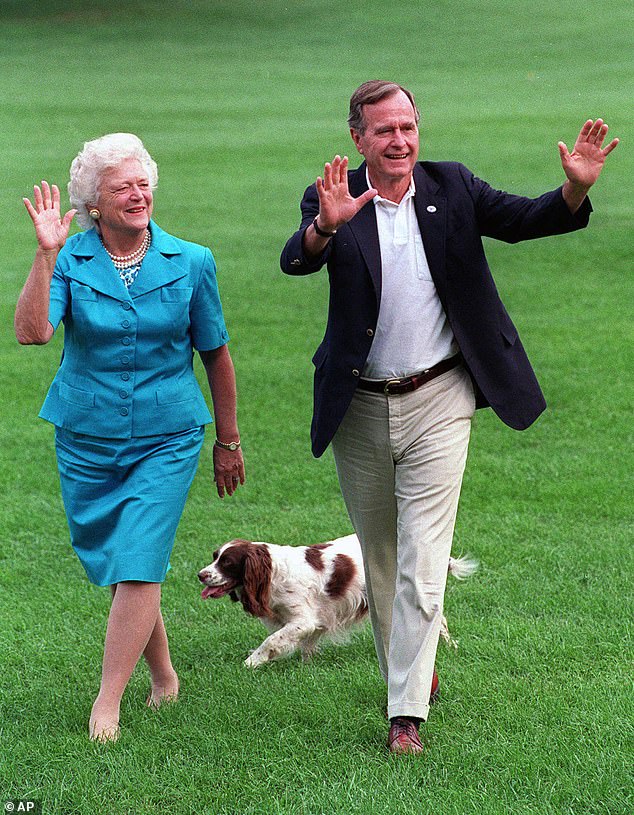 Inspiration: Jenna said the conversation she had with her grandfather after her grandmother’s death was ‘one of the most profound moments’ in her life

George H.W., who delivered a gracious concession speech one day after his opponent was projected to win the election, told the Democratic challenger that he would be ‘rooting’ for him.

The letter, which is in his handwriting, begins: ‘Dear Bill, When I walked into this office just now I felt the same sense of wonder and respect that I felt four years ago. I know you will feel that, too. I wish you great happiness here. I never felt the loneliness some Presidents have described.

‘There will be very tough times, made even more difficult by criticism you may not think is fair. I’m not a very good one to give advice; but just don’t let the critics discourage you or push you off course.’

George H.W. ended the message by lending Clinton his unwavering support throughout his presidency. 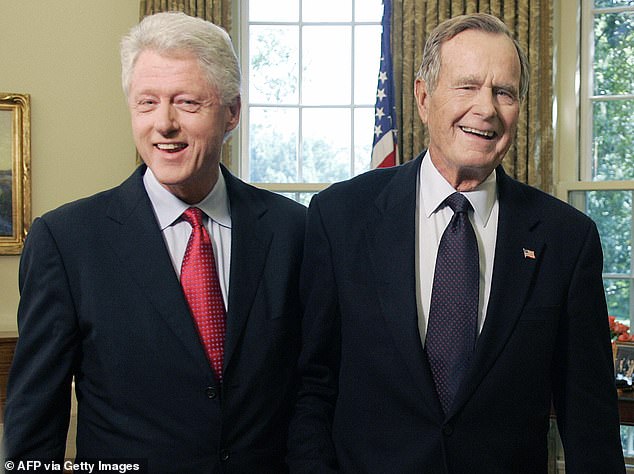 Heartfelt: Last month, Jenna recalled the letter her grandfather wrote to Bill Clinton and put in the desk in the Oval Office for him to find on inauguration day in 1993 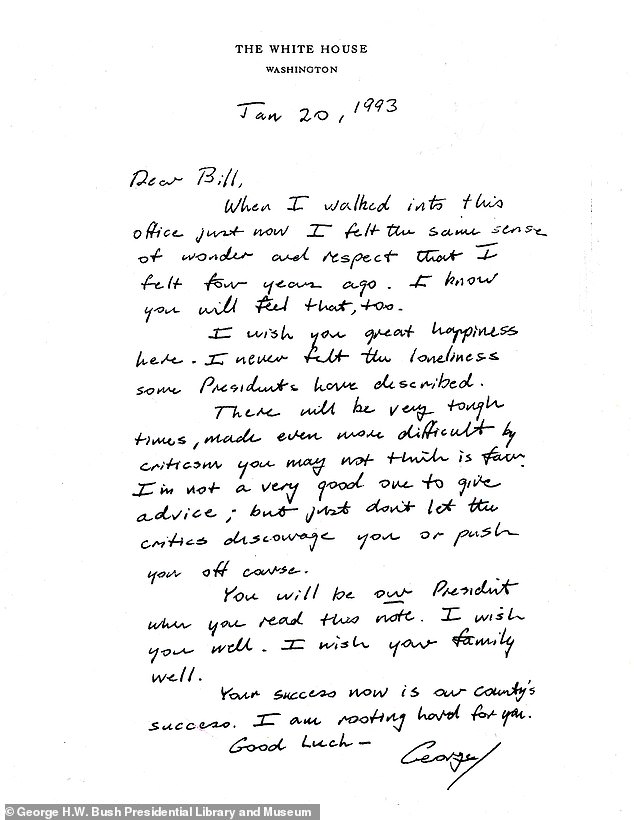 Different time: In the letter, George H.W.  told the incoming Democratic president that he was ‘rooting hard’ for him

‘You will be our President when you read this note. I wish you well. I wish your family well,’ he said. ‘Your success now is our country’s success. I am rooting hard for you. Good luck, George.’

‘At first, you couldn’t really tell,’ she said. ‘I was like in fourth grade, but there was excitement. And then all of a sudden, my grandmother left the room to go needlepoint because I think it was clear then that he would lose, and he was devastated. He had worked really hard. He thought he wanted to finish the job.

‘It wasn’t an easy night,’ Jenna continued. ‘His heart was broken, and for all of his little grandkids who loved him, our hearts were broken. We got tucked into bed that night knowing he wouldn’t have a second term.’

The two could have gone their separate ways, but the letter ended up sparking a bipartisan friendship between the former leaders.

‘The joke is everybody’s family has a black sheep, and President Clinton is our black sheep,’ Jenna said, laughing. ‘[My grandfather] was a like surrogate father for him.’