Jenna Bush Hager’s daughters had their first day of school this week, and the proud mom happily showed off photos of Mila and Poppy on the Today show before snapping pictures of them with her co-star Savannah Guthrie’s new book.

During Today’s Take Tuesday, the 35-year-old correspondent chatted about her daughters heading off to school, explaining that Monday was two-year-old Poppy’s first day of preschool.

‘First of all, she is a baby, but she went to school,’ Jenna said of the little girl, who wore a patterned dress with a Peter Pan collar and a hot pink cardigan that was buttoned up the front.

Too cute: Jenna Bush Hager shared photos of her daughters Mila, four, and Poppy, two, on their first day of school on Monday, which she captured on Instagram Stories 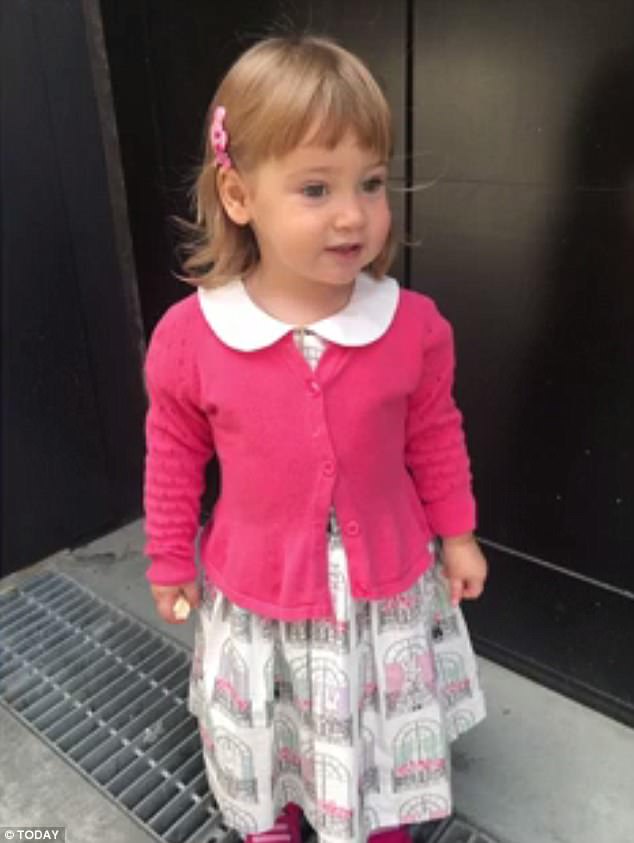 Adorable: Jenna joked that she dressed Poppy ‘like a 70-year-old’ for her first day of preschool

When asked about Poppy’s ‘sophisticated’ outfit, Jenna joked: ‘I dressed her like a 70-year-old.’

The mother-of-two said that Poppy doesn’t complain about what she is wearing just yet, noting it should be obvious because she is still ‘dressing them in matching trenches’.

Another adorable photo from the day, which was posted on Jenna’s Instagram Story, sees the girls wearing their trench coats while four-year-old Mila is cornering Poppy.

‘Nobody puts babies in the corner!’ Jenna joked, explaining: ‘Mila put her baby sister in the corner for a preschool hug.’ 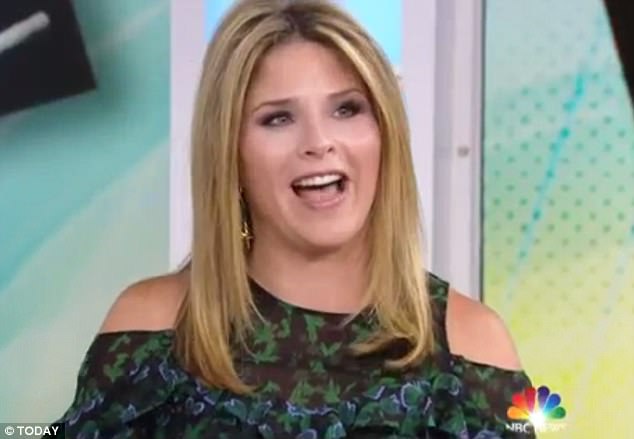 Well-adjusted: While chatting about their first day of school on the Today show, Jenna revealed they now call Poppy ‘Ronda Rousey’ because she spent the day moving furniture 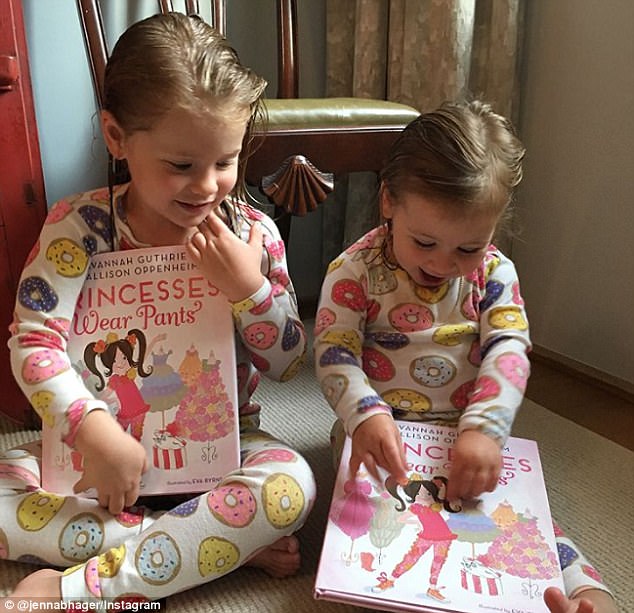 The mother-of-two said Poppy’s preschool has a thing called ‘phase in’ where parents stay with their child at the start of the day, but Jenna admitted that her youngest daughter had no problem adjusting.

‘Poppy was like, “What are you doing here?”‘ she said.

When it comes to dropping their children off at school, Jenna has the process down pat.

‘It’s like a Band-Aid,’ she said. ‘I tell it very often to my husband. I’m like, “You hand that baby over and you sprint out.” Because they want to be around you.’

As for Poppy, Jenna revealed that the little girl’s first day of preschool earned her a new nickname at home. 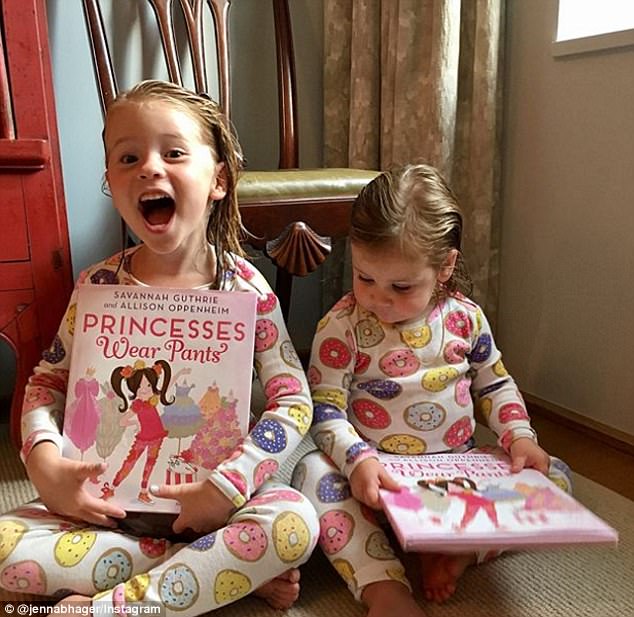 Ready for bed: The girls’ hair is still wet from their bath, and they are both wearing matching doughnut pajamas in the series of snapshots 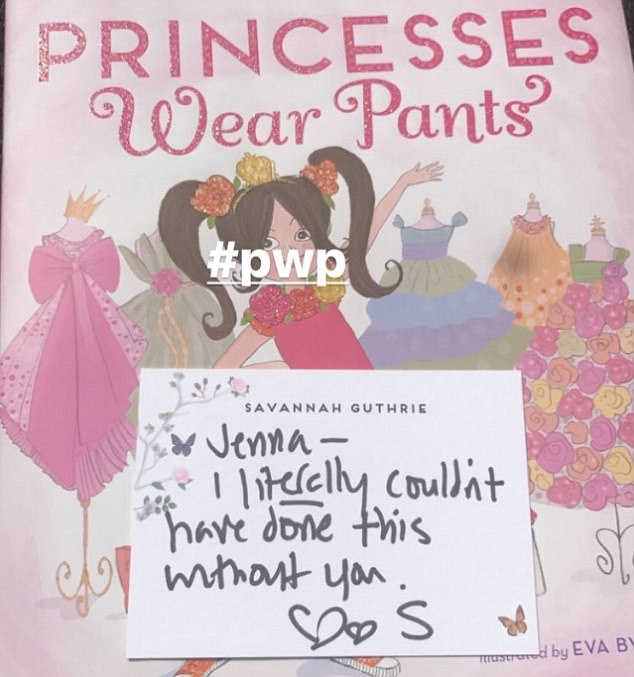 ‘I literally couldn’t have done this without you’: Jenna also posted a photo of the sweet note Savannah had written her 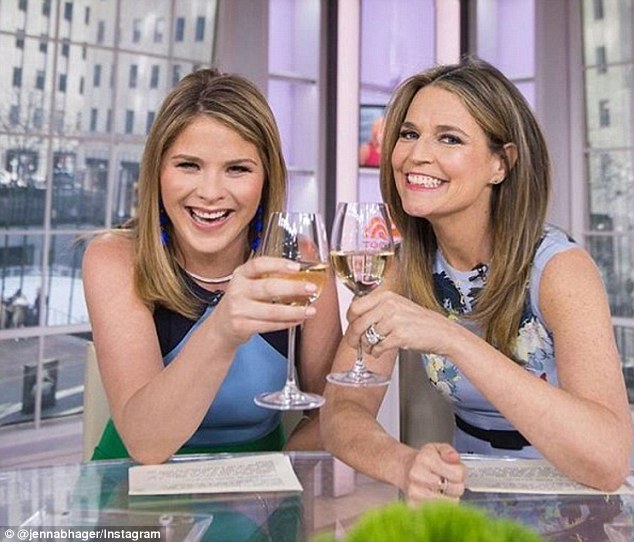 Close as can be: In addition to being co-stars, Jenna and Savannah are good friends and neighbors. Jenna’s girls often have play dates with Savannah’s two-year-old daughter, Vale

‘We call her Ronda Rousey,’ Jenna said. ‘She was the most physical child in the class. She was moving chairs.

‘Like other kids were playing with Play-Doh, and she was just like rearranging the furniture,’ she added.

It has also been a big week for Jenna’s co-star and friend Savannah, 45, who celebrated the debut of her new children’s book, ‘Princesses Wear Pants’, on Tuesday.

Savannah, who is also a mother-of-two, made sure to give her friend a copy, and Jenna shared a photo of the sweet note that was attached to the book.

‘I literally couldn’t have done this without you,’ Savannah wrote. 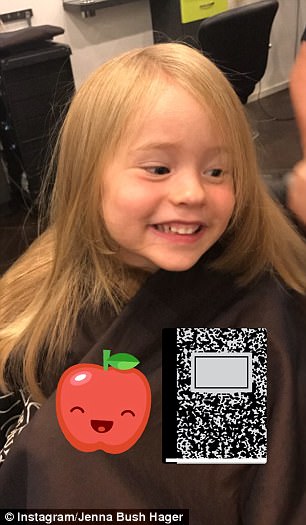 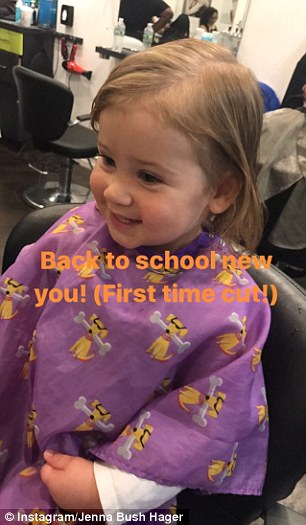 Getting ready: Jenna shared photos of her daughters Mila and Poppy getting back-to-school haircuts last Wednesday 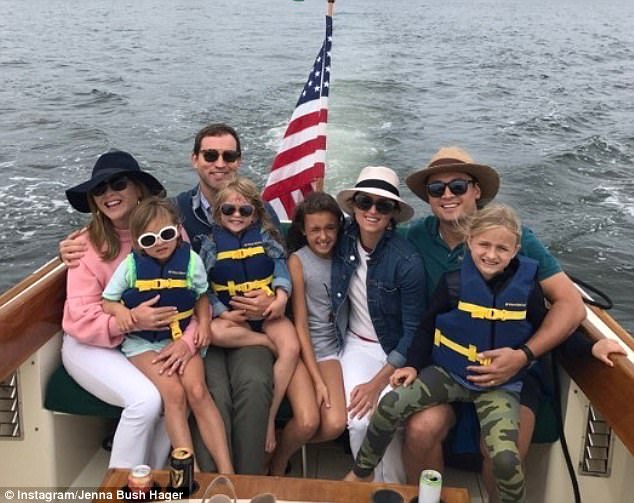 Jenna was undoubtedly a big help to her friend during the publishing process, as she and her mother, former First Lady Laura Bush, have written two children’s books together, ‘Our Great Big Backyard’ and ‘Read All About It’.

Later that night, Jenna shared a series of cute photos of Mila and Poppy clutching their copies of ‘Princesses Wear Pants’ before their bedtime.

The girls’ hair is still wet from their bath, and they are both wearing matching doughnut pajamas.

The pictures see their faces filled with glee as they hold up the book and look at its cover.

‘Proud to have a pal in @savannahguthrie that lifts girls up! #PWP,’ Jenna captioned the images.