The house is so quiet and still. There’s no cheery ‘Good morning. Coffee?’ as Zoriana, always an early riser, calls from the kitchen where she’s already cooking up a storm of pancakes for breakfast and something Ukrainian and delicious for that night’s dinner.

There will be no Ustym, Zoriana’s 17-year-old son, sauntering down in a couple of hours for tea before returning to his room for online lessons from his teachers in Ukraine in preparation for his A-level equivalent exams this summer.

Why? Because my Ukrainian refugees have left the safety of my West London home and returned to their beloved homeland, even though the bombs still fall.

Jenni Murray opened her home to refugees, mother and son, Zoriana and Ustym, for six months as they fled their war torn country. The pair have now gone back to their beloved homeland even though the bombs still fall

Many will be baffled as to why they’ve gone with the war no closer to a conclusion. But I understand their reasoning perfectly well.

As a single parent, Zoriana has one great concern in life. The safety and success of her son. She had no choice but to make the arduous journey — a flight to Warsaw, plus a nine-hour coach journey to her home in Lviv — for Ustym to have the chance to sit those vital exams.

We did our best to arrange for them to be done online, perhaps in a room in a local college with an invigilator to ensure no cheating.

It proved impossible. I guess the Ukrainian government has more to worry about than one boy’s academic achievements.

Ustym has worked hard throughout his stay with me. He’s ambitious. He wants to study at university. We learned that London universities will be keen to take on suitably qualified Ukrainian students, even offering six months’ intensive English lessons. The qualifications are crucial. And Zoriana knows that more than anyone.

The farewell was tearful for all of us. When her message came through the following day to say they had arrived safely, it was such a relief.

‘We miss you. I’m home finally. Everything is OK. It’s warm here and quiet. Ustym says “Hallo” to you. He is tired. He couldn’t sleep on the bus. Now he has gone to bed and I’m going, too. Good night, dear. Sweet dreams.’

It had not occurred to me towards the end of April, when I sat nervously at Luton airport awaiting the arrival from Warsaw of two Ukrainian refugees to whom I had promised a home for six months, that they would become not just friends but family.

Back then, I knew nothing about them apart from the basic details needed to secure their visas. What sort of people would they be? How traumatised would they be as a result of their home country being invaded by Russia and subjected to the brutality we had all witnessed on our television screens?

How capable would I be at helping them settle in and cope with the knowledge of the dangers their family, friends and fellow citizens might be facing? 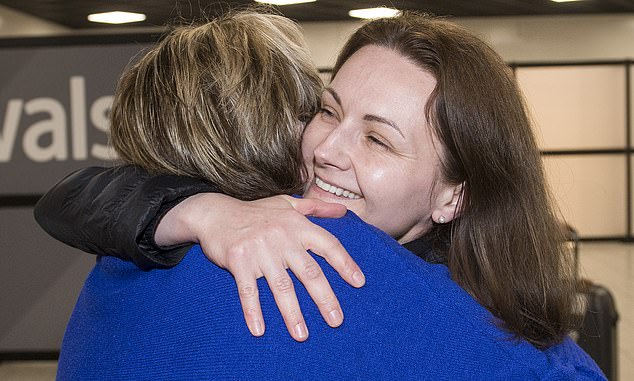 I fully understood why the decision to escape was made. Zoriana’s desperation to flee as the brutal war escalated was purely for the safety of her son. I knew from Ustym’s passport, which had been sent to me online, that his 18th birthday would be in September. He had to be safely settled with a long-term visa in the UK before then.

Males from 18 to 60 were not allowed to leave Ukraine as they were required for military service. I have sons of my own. I know what fired Zoriana’s determination to get out. In similar circumstances, I would have done the same.

We have spent long hours discussing her terror as they spent night after night sleeping in the basement of her block of flats. People assume the west of Ukraine is safe and it’s only the east that has been bombed to total destruction. Zoriana would tell me of the terrifying air-raid warnings that became a daily reminder of the dangers they faced.

I began to learn how frequently military installations near her home were being bombarded as we sat around my dining room table.

The air-raid warnings would sound in my house as they were fed through her phone. Could she not switch them off? She was safe here with me. She didn’t know how.

Nor could she ignore the frequent pings of WhatsApp messages from her mother and her sister, still at home, scared, wondering whether they too should come to England, but reluctant to leave behind a husband and father who would not be allowed to leave the country and may be expected to fight.

As it turned out, I needn’t have worried for one second about how we would get on. It was a great relief to discover they loved my two chihuahuas and the Burmese cat.

Ustym and Soo the cat formed a very close relationship. I barely saw her. She was with him constantly. Zoriana is young — at 39 she’s exactly the same age as my older boy. She’s bright, warm and has a personality as determined as my own. 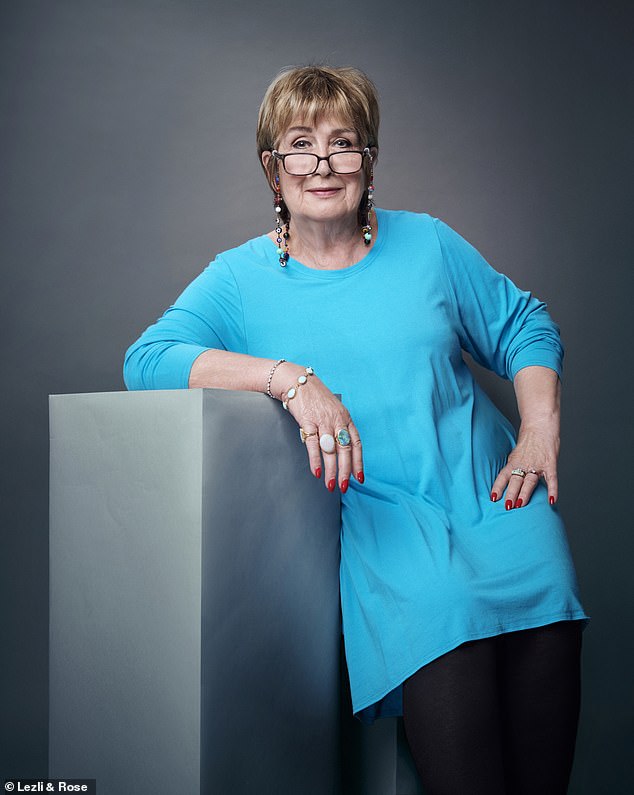 Jenni Murray (pictured) told how her and the family spent long hours discussing the terror as they spent night after night sleeping in the basement of her block of flats. Zoriana spoke of the terrifying air-raid warnings that became a daily reminder of the dangers they faced

She was entirely respectful of her place in my home and made sure Ustym was equally so. There were no awkward moments when it came to the use of my one and only bathroom, although there were occasionally times when I regretted not having set in place my plan to install a downstairs loo. Nevertheless, we managed.

Every evening, we would sit around the dining table and eat together. Very good for me as the tendency to eat something quick on your lap in front of the TV is a great temptation when you’re alone.

First, it would be the three of us, although conversation with Ustym was not very easy. His English is poor and he depended frequently on a translation app on his phone. At the outset, I would often hear ‘Repeat, please’ as he failed to understand what I’d said.

After six weeks with me he was gaining confidence and began to tell me about his friends at home, a night out he’d had with some young Ukrainians he’d met in London and the reason why we barely saw him after dinner in the evening.

He would ask to leave the table after gobbling down his food — teenage boys eat lots and fast — and go up to his room. There, he played games on the computer with friends in Ukraine. A social life of sorts, and important for his sanity.

It’s curious that sometimes you don’t need to understand a language to know exactly what’s being said. I have not one word of Ukrainian but realised that communication between mothers and sons is absolutely universal in tone.

I’d asked Ustym if he would mind taking the dogs for a walk in the park. He agreed and was putting on his shoes at the front door, dogs on their leads, when I overheard a conversation in rapid Ukrainian.

Zoriana was issuing instructions about keeping a close eye on the animals when he let them run off the lead. Ustym’s response was, ‘For God’s sake, Mum. I know how to walk a bloody dog!’ Zoriana confirmed that my reading of the tone was spot on.

As the days went on, Zoriana’s determination impressed me more and more. For the first couple of days, I had cooked my signature dishes — spaghetti bolognaise, perfect for a teenage boy, and lamb casserole with apricots.

Both went down well, but then Zoriana, over a vodka and tonic — we shared a favourite drink — said she would like to introduce me to some Ukrainian dishes.

From that point on, my kitchen was no longer my own. Was I unhappy at this development? No! Cooking is my least favourite occupation. Zoriana loves it. Our days would go like this. She’d be up early. We’d have coffee and a light breakfast. She’d do some work — translating documents on her son’s computer. I’d read the newspapers and do a bit of writing. Every couple of days we’d shop.

She fell in love with Marks & Spencer and the local supermarket. She needed flour. We got it. My salt wasn’t strong enough. We bought better. She needed a special kind of cheese. We found it. We bought beetroot for borscht — my favourite ever soup. Then she needed sorrel to make a white borscht with cabbage. It would add zest to the soup.

There is no sorrel to be had in North London. She came home one afternoon having spoken to a Ukrainian neighbour whose children she’d been minding that morning and announced that sorrel could be found on Hampstead Heath. I begged her not to go alone to the heath. She went and came back with a bag full of sorrel. The soup was amazing and so is she. 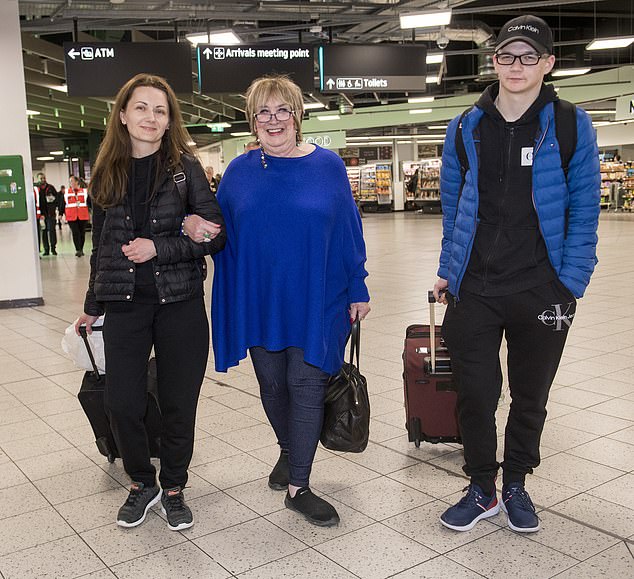 ‘Now they’re gone and it’s only from frequent messages that I know they’re safe. I’m missing their company and scared, every day, about their safety. I feel I’ve lost an adopted grandson and the daughter I never had’

In no time at all she had figured out what bus routes would take them to the Ukrainian church in Central London, found herself a couple of cleaning jobs and, of course, the childcare for which she’s eminently qualified. In Ukraine she’s a primary school teacher. She was determined to earn money of her own. I rarely have admired someone so much.

Her company was a constant pleasure. In the evenings, over a vodka and eating her delicious food, we would talk over her history — a long-ago marriage to a priest who became Ustym’s father. It didn’t work out. The hard work of teaching and raising a child alone. Her love of Ukraine and her longing for me to come and see Lviv.

‘London is beautiful,’ she said, ‘but Lviv is the most beautiful city in the world. Please let it still be beautiful after this terrible war.’

Now they’re gone and it’s only from frequent messages that I know they’re safe: Ustym is seeing his teachers and friends, and the dog has come home temporarily.

And me? I’m dealing with a miserable cat who’s slinking about the place like a lost soul, popping down for a bite to eat, then returning sadly to Ustym’s now empty bed. The dogs, Madge and Frida, are loafing on the back of the sofa, gazing out of the window, wondering when our guests will be back.

I’m missing their company and scared, every day, about their safety. I feel I’ve lost an adopted grandson and the daughter I never had.

‘Oh Jenni. Everyone here asks me how I felt in London. My answer was, I felt like I was at home. I feel like I have known you for ages. It was so easy, so comfortable. It was a great pleasure to meet you every time. To talk to you, to spend every minute of a day, to have meal with you.

‘You are a part of my soul and my heart for ever. And I miss you so much. You are so dear for us. I’m sure now I have mummy in London. Love you so much!’

And Zoriana and Ustym, the feeling is mutual. Come back as soon as you can.