Jennifer Lawrence welcomed her first child with husband Cooke Maroney in February 2022, but it doesn’t seem all that long ago that the couple first got together.

Here, DailyMail.com takes a look back at Jennifer’s relationship with her husband, from their early beginnings to their lavish 2019 wedding, her pregnancy and their first child.

Baby on the way! Jennifer Lawrence welcomed her first child with her husband Cooke Maroney in February 2022

Lawrence was first linked to Cooke, an art gallery director, after they were introduced by mutual friends in 2018, and by February 2019, the blonde beauty was spotted wearing an engagement ring.

‘Well, he’s just the best person I’ve ever met in my whole life. It was a very, very easy decision,’ she told Entertainment Tonight after accepting his proposal.

‘He really is, and he gets better,’ the actress went on.

Lawrence and Cooke tied the knot in 2019 at the Belcourt of Newport in Rhode Island with the likes of Adele and Cameron Diaz in attendance. 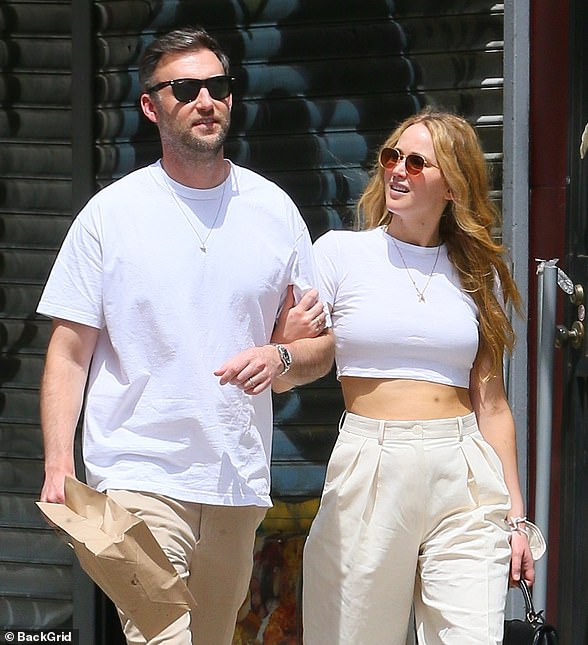 I do! Lawrence and Cooke tied the knot in 2019 at the Belcourt of Newport in Rhode Island with the likes of Adele, Cameron Diaz, and Emma Stone in attendance

Their wedding had 150 guests, including Kris Jenner and her boyfriend Corey Gamble, Amy Schumer, Emma Stone and Ashley Olsen.

For her rehearsal dinner, Jennifer and Cooke hosted a clambake on Rose Island under a white tent, with Sienna Miller, Joel Madden and Nicole Richie seen arriving to celebrate. 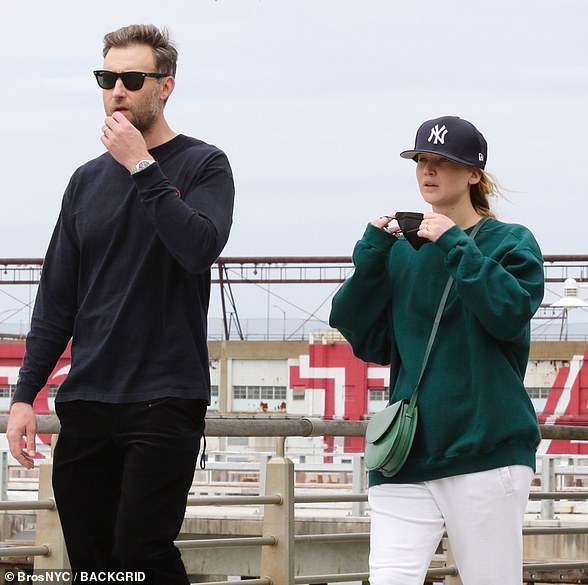 On the go: Lawrence spotted with her husband going for a power walk in New York in May 2021

While neither Jennifer or Cooke have spoken publicly about their relationship, insiders gushed about their chemistry, with a source telling People in 2018: ‘She is smiling like I have never seen her do with any of her previous boyfriends’.

By 2019, insiders claimed the couple were talking about starting a family.

‘They both want children and have been discussing starting a family,’ a source told ET Online back in 2019.

‘Their families truly believe they are meant to be; his family loves her family and vice versa, so their parents are excited. Their parents get along so well and are all looking forward to big family get-togethers.’

While many of Jennifer’s past romances have been conducted under the gaze of the world, the actress and her husband have enjoyed their romance away from the public eye, taking low-key trips to Europe and being spotted on dinner dates in Cooke’s home city of New York.

On September 8 2021, the star’s representative confirmed her pregnancy with People.

Jennifer was spotted for the first time with her baby bump on display on September 8 in photos obtained exclusively by DailyMail.com.

She welcomed their first child in February 2022, but did not disclose the gender or name.

In May, she appeared on the Ellen DeGeneres Show and the host referred to her baby as a ‘he,’ appearing to reveal she welcomed a son. Jennifer did not confirm or deny the gender. 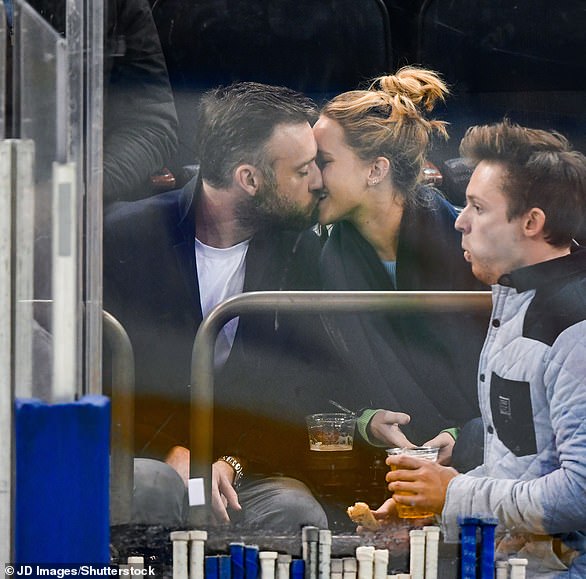 Kisses: The couple locked lips at a hockey game in New York in 2018