She’s been getting mixed reviews for her new horror movie Mother!, which she has been touring the world promoting at various international film festivals.

But Jennifer Lawrence, 27, was the focus of what is likely her most bizarre critique of all recently, when she read out a very raunchy Celebrity Mean Tweet about herself in a pre-recorded clip which aired on US TV on Monday night.

Taking part in another star-studded instalment of the Jimmy Kimmel Live segment, the actress read a tweet from somebody who suggested that she ‘gives really unenthusiastic h**dj*bs’, to which she hilariously responded: ‘How do they know?’

Also joining the Oscar-winning beauty for a round of viewing the harsh words people on social media share about them was Gwyneth Paltrow, who has sung the praises of vaginal steaming ‘for healing purposes’ in her lifestyle publication Goop.

The actress, who celebrates her 45th birthday on Wednesday, read: ‘Can Gwyneth Paltrow just stuck to steaming her vagina and shut the f**k up, for f**k’s sake?’

Jennifer Aniston, 48, encountered a tweet that was far less blue, though equally mean-spirited, which stated: ‘Jennifer Aniston is what happens when a bag of flour gets its big break.’ Showing her sense of humour, she dubbed the tweet ‘funny’. 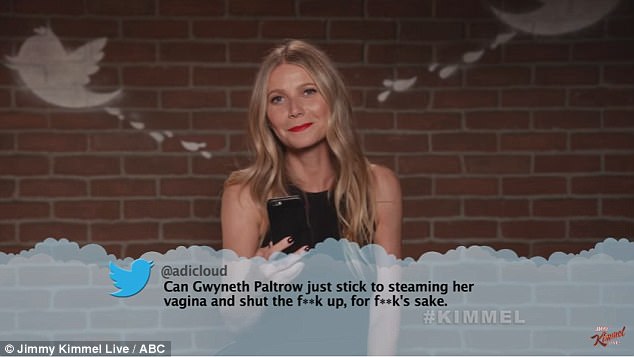 Steaming: Gwyneth Paltrow was told to ‘stick to steaming her vagina’ in one harsh missive 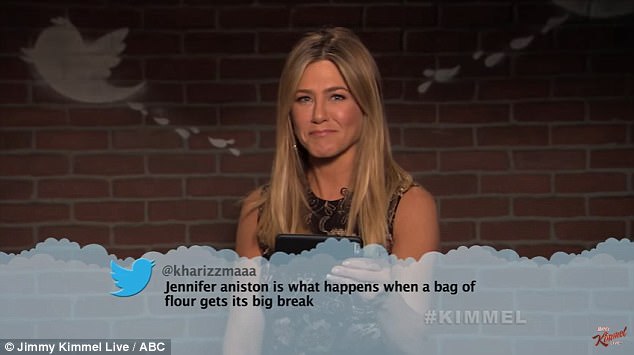 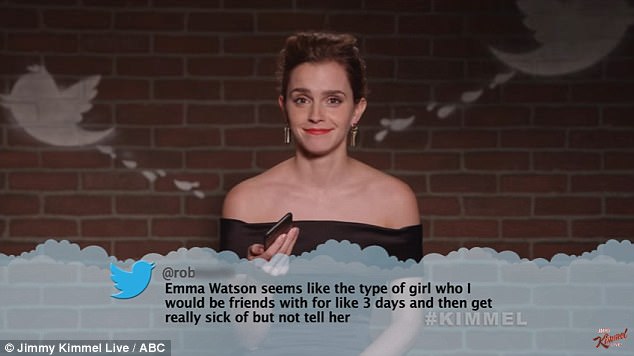 Not very nice: Emma Watson seemed unimpressed as she read the unkind words aimed at her

Also faring badly was French-born, British-raised actress Emma Watson, 27, who read: ‘Emma Watson seems like the type of girl who I would be friends with for like three days and then get really sick of, but not tell her.’

The Handmaid’s Tale star Elisabeth Moss, 35, pulled a sad face as she encountered the words: ‘Elisabeth Moss looks stunning. I think she can clean up well, despite my grandmother’s harsh opinion that she’s hideous.’

And Israeli actress and model Gal Gadot, 32, was forced to assure ‘they’re there, don’t worry’, after encountering a tweeter’s musings why ‘that woman got no t**ties’.

The men of Hollywood weren’t left out of the viciousness, with 36-year-old actor Jake Gyllenhaal reading a tweet which stated that he ‘has the most punchable face of all time. I’d like nothing more than to sock him in his ugly soft, starry-eyed pug face.’ 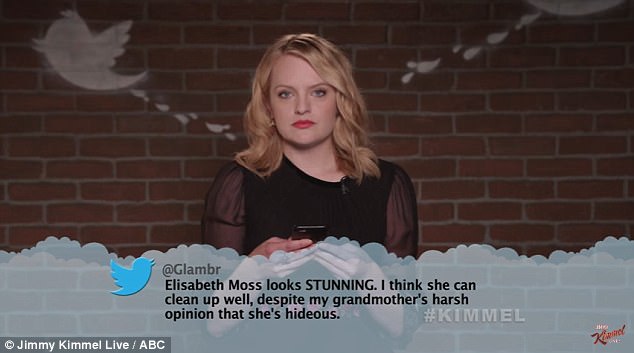 Horrible: Elisabeth Moss appeared to enjoy the tweet aimed at her… until she reached the end 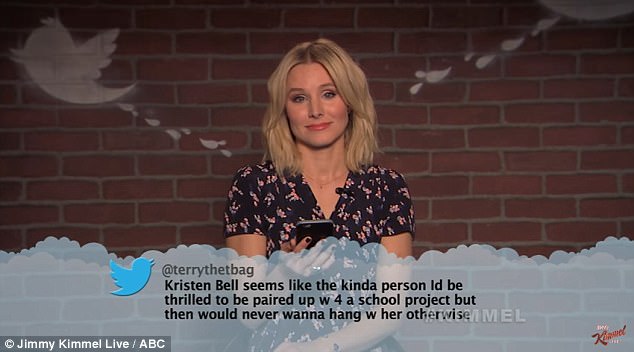 Playground antics: Kristen Bell said that the mean words directed at her were ‘probably true’ 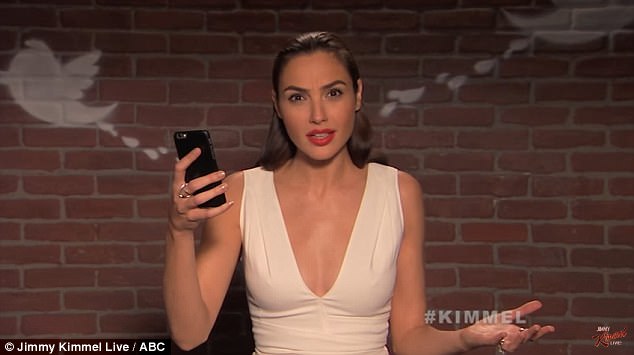 All intact: Gal Gadot assured she’s endowed as somebody mused about the size of her bosom 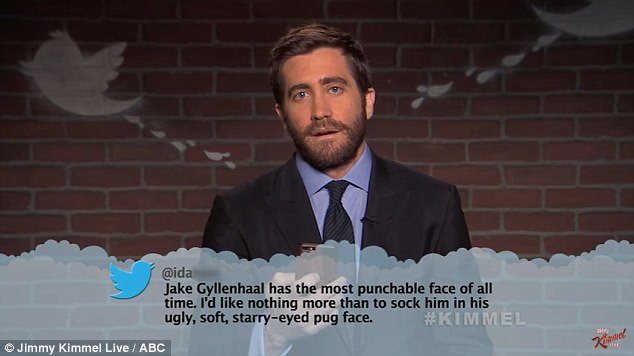 Violence is not the answer: One tweeter took aim at screen star Jake Gyllenhaal’s famous face

The Big Bang Theory’s Jim Parsons was left exclaiming ‘oh God!’ when he perused somebody’s harsh claim that he ‘looks like a ventriloquist’s dummy that came to life to become a sex offender’.

When his turn rolled around, Michael Keaton read: ‘Someone just told me I smiled like Michael Keaton and I don’t know if I should take one million selfies or put a gun in my mouth.’

After laughing in reaction to the tweet, the 66-year-old actor wryly advised: ‘I’d put a gun in your mouth.’ 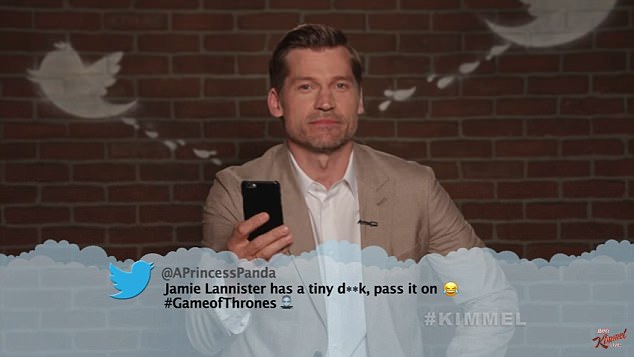 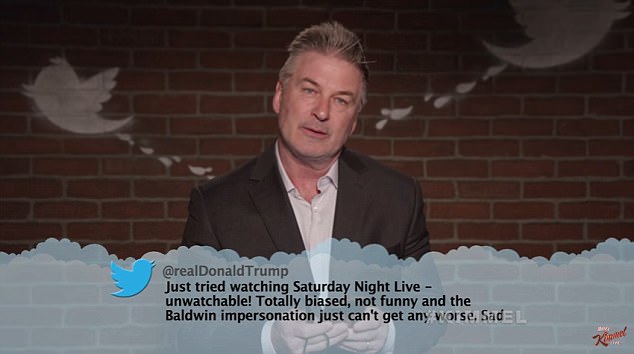 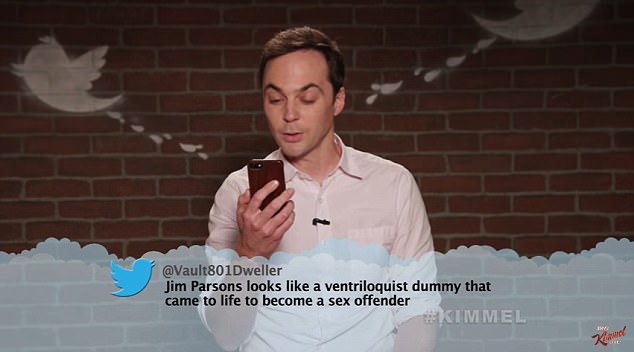 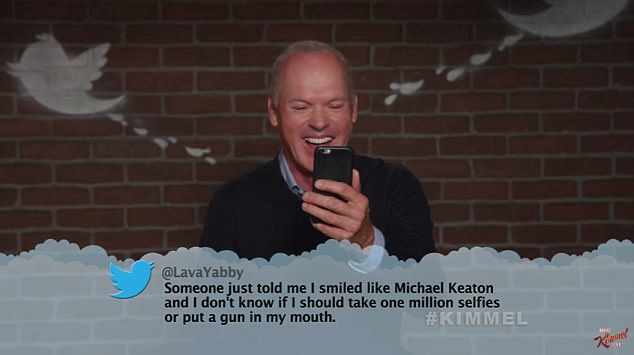