Jennifer Lawrence says it was her decision to wear dress

She was widely criticised for wearing a dress with a plunging neckline and thigh-high split to go out in the freezing cold.

But Jennifer Lawrence hit back yesterday, saying the revealing gown was her choice – and she will wear a bikini under a snowsuit next time.

The 27-year-old actress told the Daily Mail during an interview at Claridge’s hotel in Mayfair that she wore the dress to Tuesday’s photoshoot in London for her latest film ‘because it was fabulous’.

The Oscar-winning star said she was ‘extremely offended’ by criticism of her decision to go for glamour over comfort during a freezing photocall for her latest film Red Sparrow (pictured from left director Francis Lawrence, Matthias Schoenaerts, Jennifer Lawrence, Joel Edgerton and Jeremy Irons)

‘And nobody can tell me what to wear and not what to wear. It’s my choice to wear a dress that I feel fabulous in.’ 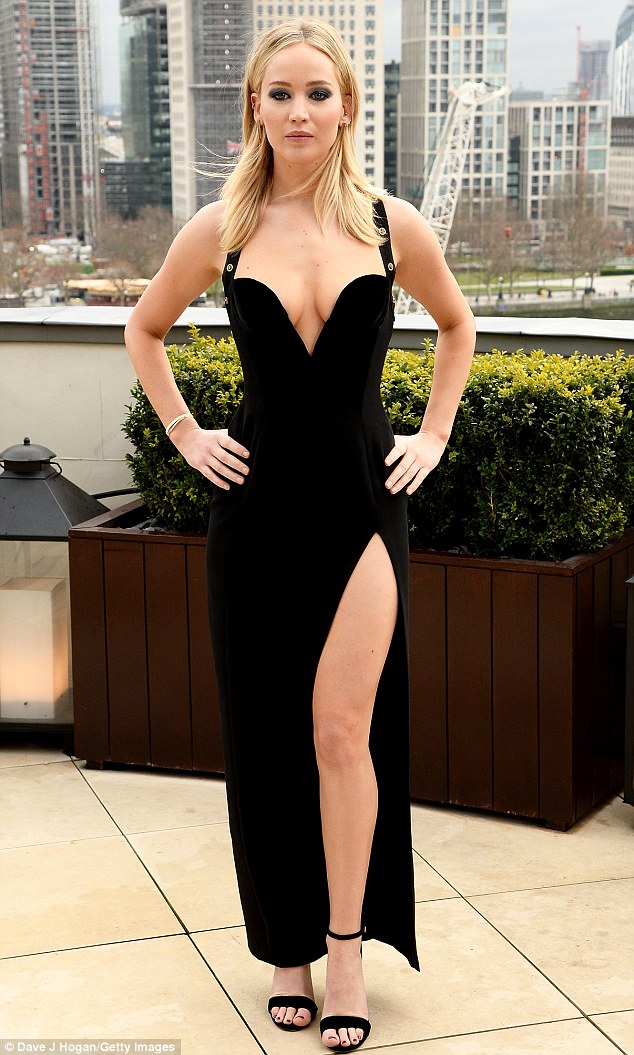 The Hunger Games star said that her dedication to vintage couture was at the heart of her decision to don the black Versace dress despite the weather being close to 3 degrees in London. She told followers: ‘Everything you see me wear is my choice’

Bursting out laughing, she asked: ‘Can you tell I’ve had a lot of caffeine and that I’m fired up?

‘Seriously though, why is this a controversy? I wore a beautiful dress that made me feel gorgeous. I was with a bunch of men and they were wearing coats. So what?

‘People make controversies just for sport and it’s actually just irresponsible, because there’s no controversy there.

‘I’ll wear a bikini next time but, OK, I might wear a snowsuit over it if that will make them happy and stop people complaining. But just so we’re clear, if I don’t want to wear a coat then I’m not going to wear a goddamned coat.’

Miss Lawrence, who presented one of the awards at Sunday’s Baftas, plays a ballerina-turned-spy in her latest film, Red Sparrow, which opens on March 1.

The role called for nudity, something she has shunned since private photographs of her were hacked into in 2014 and published online.

‘I felt violated and I just wanted to shut down. I never wanted to share my body, my flesh, with the public ever again,’ she said.

‘But reading the script for Red Sparrow was a huge growing point for me. I knew the nudity was relevant for the character and for the story and I felt, “OK, if I don’t do this movie, they win”.’ 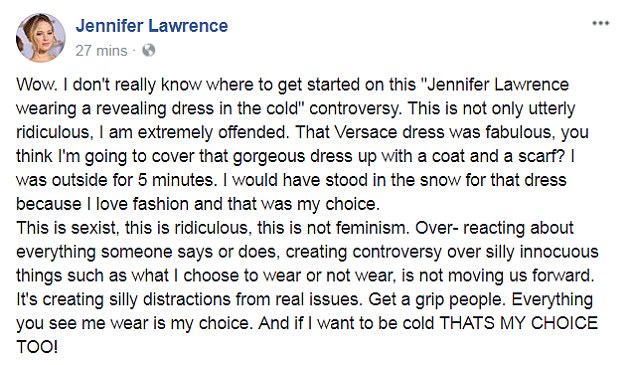 The actress issued a statement on Facebook today, calling calls for her to cover up in London’s freezing weather offensive, saying ‘If I want to be cold that’s my choice too’

However, she had always regarded screen nudity cautiously. She said: ‘I think Americans have a different attitude towards nudity, very generally. I grew up in Kentucky, I grew up in a conservative home, so those factors come into play.’

Miss Lawrence said the #MeToo and #TimesUp sex abuse and equality campaigns in showbusiness had allowed her to question her views about on-screen nudity.

‘It’s true, I have been afraid and insecure in ways of sexuality and nudity for so many years that I felt like, finally, I wasn’t going to let that ruin my life any more and so I felt freed and empowered by that,’ she said. She stressed that the nude scenes in Red Sparrow added colour to her character and were not gratuitous. ‘She has been trained to use her body as a seductress but she actually gains her freedom by using her mind,’ Miss Lawrence said.

‘She gets ahead by using the forces of being a woman. She’s manipulative, she’s cunning, she’s brutal and she has rage and she has a brain and she uses all of herself to defend herself and defend others.’

Others argued on Twitter that Lawrence knew exactly what she was doing when it came to the fashion statement, with one, @leoalxndr1, saying: ‘JenniferLawrence had a coat. She took it off for a couple press photos, yes she was probably cold but she survived. CALM DOWN’

Asked if equality should go as far as leading men revealing more on screen, she replied: ‘Our bodies are definitely more beautiful naked in my opinion. If the role calls for nudity and you want to do it then do it, as long as you feel comfortable. We have the freedom to do as we please as long as there is consent.

‘I get why men shy away. Our biologies are different, there’s a lot a woman can hide with prosthetics but with a man it’s out there. If I were a man, I don’t know how I would approach it.’

Miss Lawrence announced this week that she would use a year’s gap in her film commitments to work for community organisation Represent.Us.

‘I’m trying to get young people engaged politically on a local level,’ she said.

‘I’ve been to Ohio and New Orleans and there are 48 more states to go. I just want to spark a conversation that can hopefully create change in the way our democracy is run.’