She was delighted when her man popped the question back in March.

The A-list couple partied together at a private affair at the Los Angeles home of veteran singer Carole Bayer Sager on Friday to celebrate their engagement.

Ryan Seacrest and Leah Remini were among the select group of guests.

So in love: Jennifer Lopez and Alex Rodriguez partied together at a swank private affair in Los Angeles on Friday to celebrate their engagement to one another 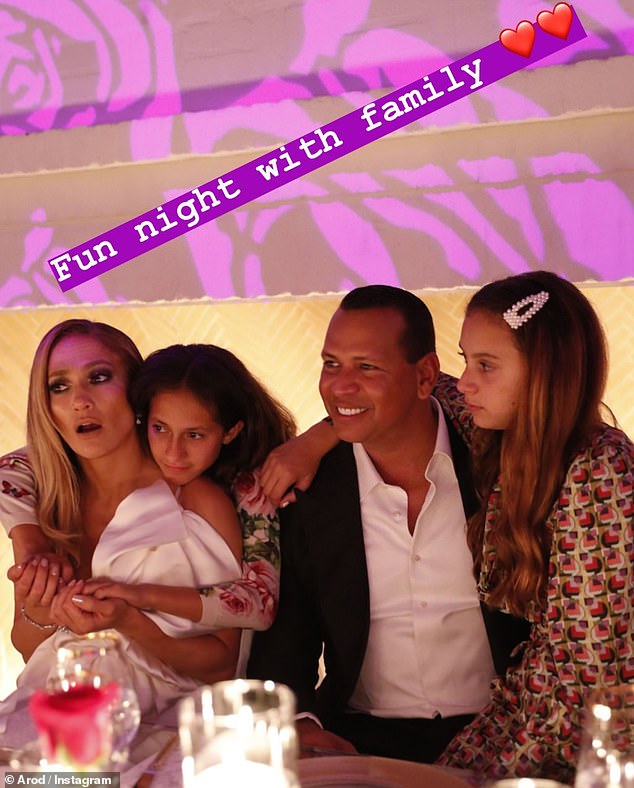 Family folks: In his Stories, Arod also posted some snaps with the pair’s daughters 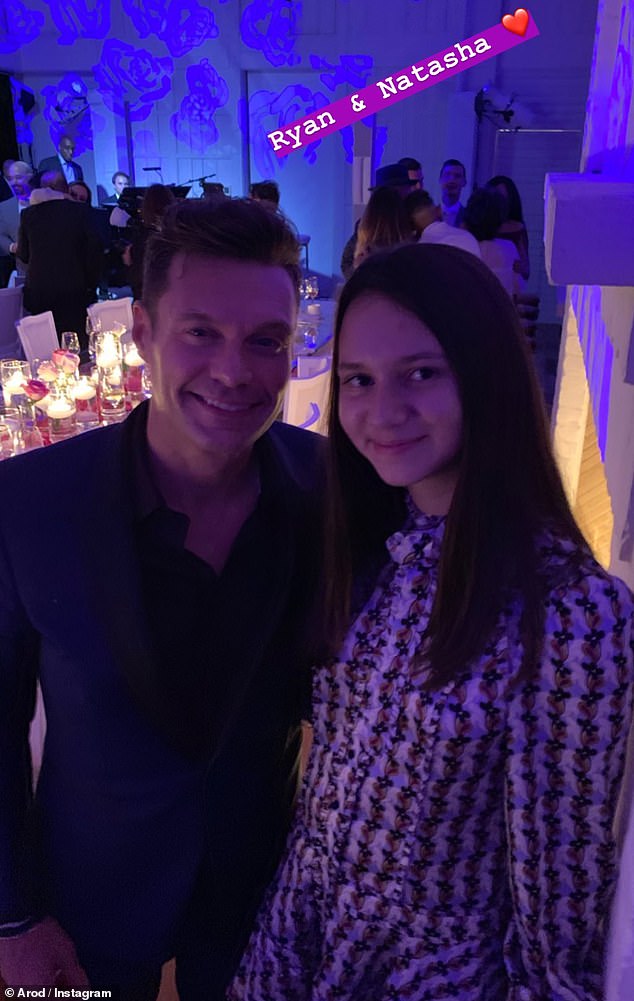 Those present also included the couple’s family, most notably children, Jennifer’s daughter Emme and her twin Maximilian, both 11, and A Rod’s girls Ella, 11, and Natasha, 14.

An insider told E! News: ‘It was a dimly lit party with candles everywhere, white flowers and purple lighting. It was held both indoors and outdoors.’

The source added: ‘It was a chance for all of their friends in LA to celebrate their engagement.’

Jlo, 50, was looking exquisite as usual, in a white ruffled one-shouldered top with her light hair down and to the side for a softer look. 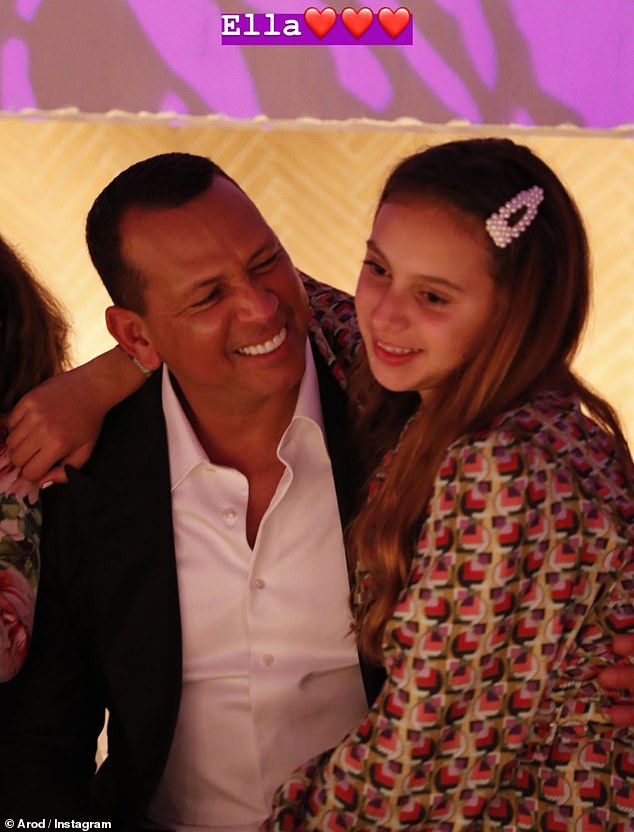 Doting dad: Rodriguez showed the love to his daughters on his Instagram after the big party 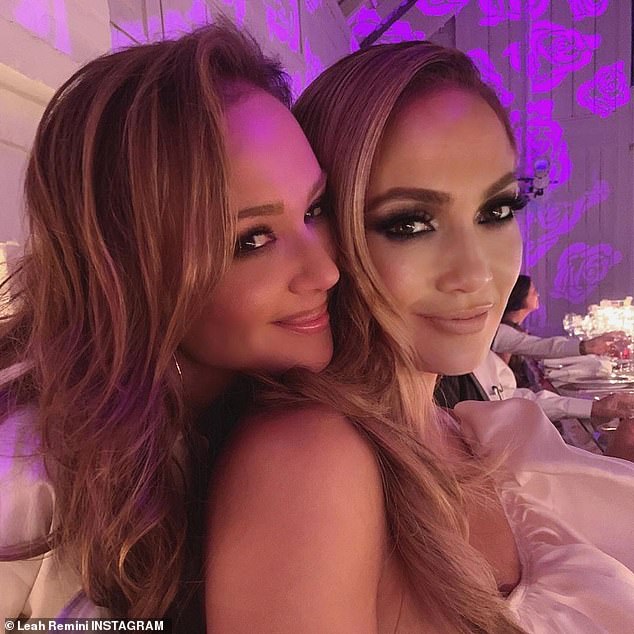 No filter: The other famous face appearing at the event was none other than Leah Remini, who posted a cute selfie in which she and Jlo look particularly gorgeous

Rodriquez, who popped the question to his bride-to-be over a romantic getaway to the Bahamas in March after over two years of dating, posted a photo of the beaming couple to his Instagram on Saturday, captioning it with: ‘So great celebrating with family and close friends last night.’

In his Stories, he also posted some snaps with the pair’s daughters — Emme is Jlo’s daughter from her previous marriage to Marc Anthony, and Ella is Arod’s younger daughter with ex-wife Cynthia Scurtis.

One snap showed all four of them together, with Alex, 44, captioning the photo ‘Fun night with family.’

At least two other famous guests were in attendance, as evidenced on social media, with Ryan Seacrest posing with Rodriguez’s older daughter Natasha.

The other famous face appearing at the event was none other than Leah Remini, who posted a cute selfie in which she and Jlo look particularly gorgeous. 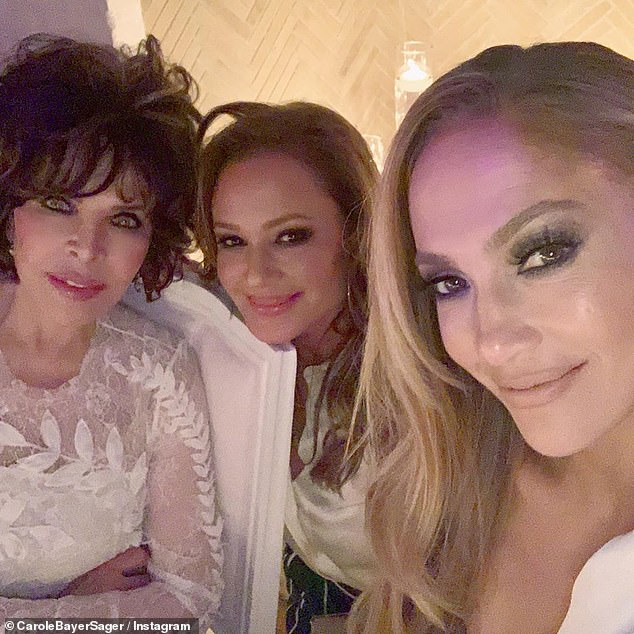 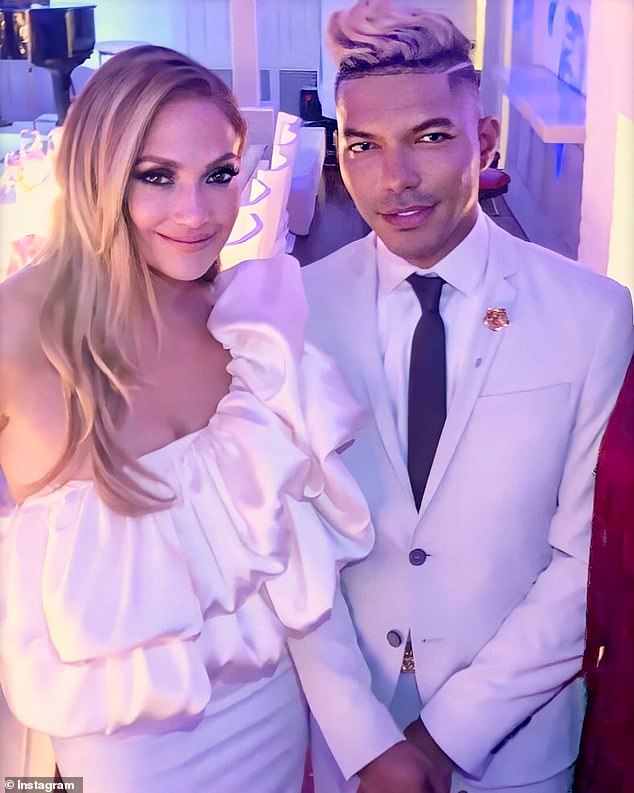 Remini captioned the snap with just one hashtag, ‘#reunitedanditfeelssogood’.

The very family-oriented couple has mostly remained rather tight-lipped about details of their upcoming nuptials, but the Hustlers star did say in a video on her YouTube channel over the summer that it will be happening next year.

‘It’s been three years now,’ Lopez said, referring to how long she’s been involved with Rodriguez. ‘[We’ll get hitched] soon, not soon-soon but next year.’

In addition to all her recent activities, Lopez can add yet ANOTHER reason to celebrate to her list: her engagement party comes just two days after it was confirmed that she will be co-headlining next year’s showy Super Bowl halftime show with Colombian performer Shakira.

Alex has revealed how ‘proud’ he is of his wife-to-be.

Following the announcement, the retired baseball star posted on his Instagram and Twitter pages: ‘So proud and SO EXCITED! Bringing it home! Going to set the #305 on [fire emoji] (sic)’ 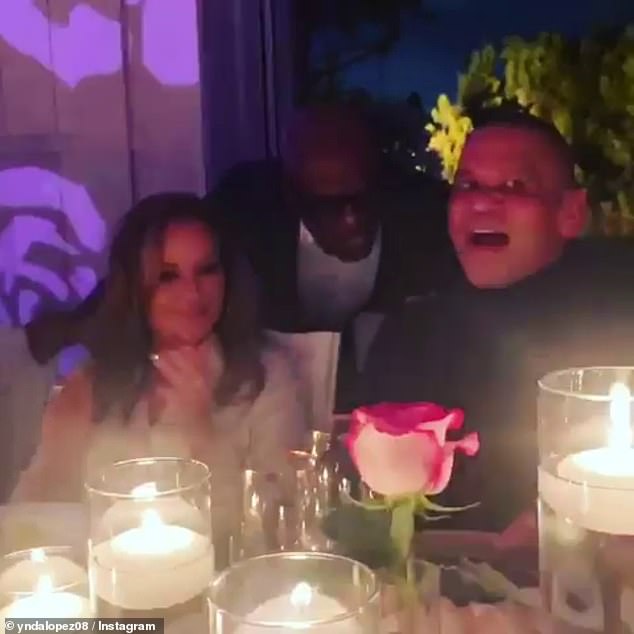 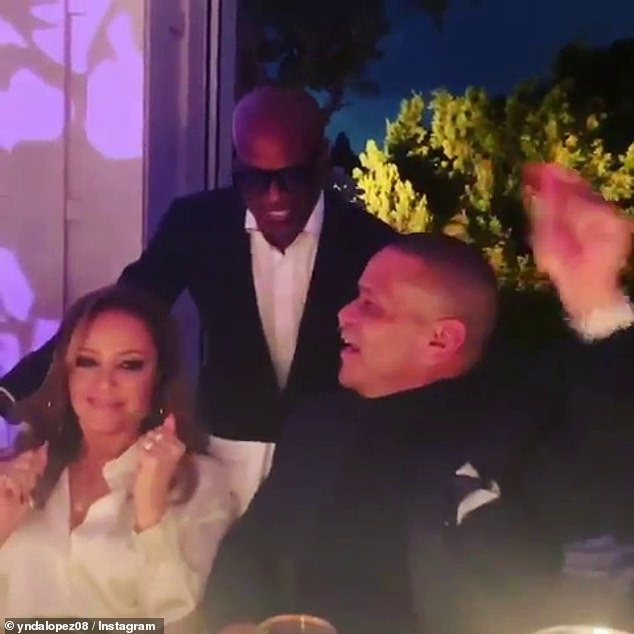