Jennifer Lopez turned heads in an eye-catching suit as she made a guest appearance at the Grameen America’s Raising Latina Voices event at the Universal Studios backlot on Saturday.

The Marry Me actress, 53, was radiant as she posed for a brief photo session once she arrived at the venue.

The beauty recently partnered as a national ambassador with the nonprofit organization, Grameen America, earlier in June.

The On The Floor singer opted for a professional look for the special occasion.

She donned a pair of chic, white dress pants along with a blouse comprised of a pointed collar. A thin, white Fendi belt was added to accentuate her waist.

Jennifer added a cropped jacket of the same color and material to complete her overall look.

The star slipped into a pair of white, platform heels to add a stylish edge to her classic ensemble. 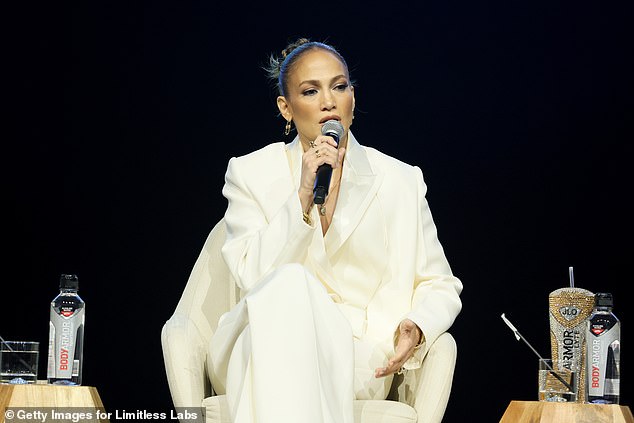 Partnership: The actress and singer partnered with Grameen America as their national ambassador earlier in June 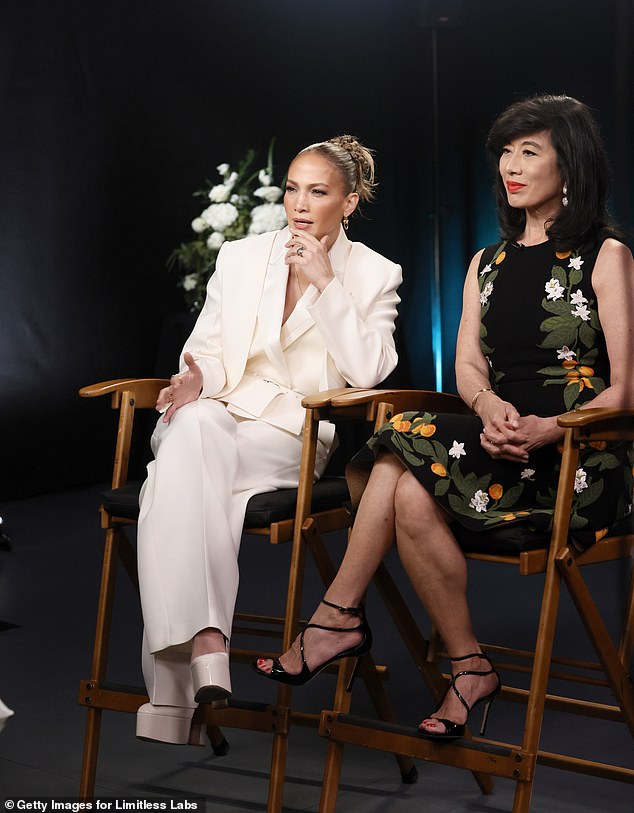 The award-winning star styled her long locks into a tight, sleek bun, showcasing a pair of gold, dangly earrings.

The stunning actress further accessorized her outfit wearing a gold necklace with a rectangular-shaped embellishment along with an assortment of gold bracelets.

Jennifer appeared to be enjoying her time at the event, where she had the opportunity to celebrate Hispanic Heritage Month and explain her role as a national ambassador for the nonprofit organization.

Other photos captured the JLo Beauty founder taking a few selfies with an excited crowd of fans jumping into the snap. 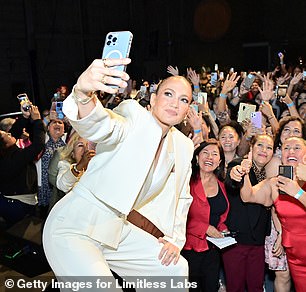 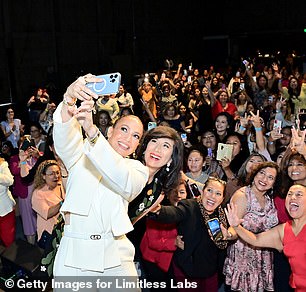 Happy moment: Jennifer was seen taking a selfie with a group of excited fans trying to jump into the photo 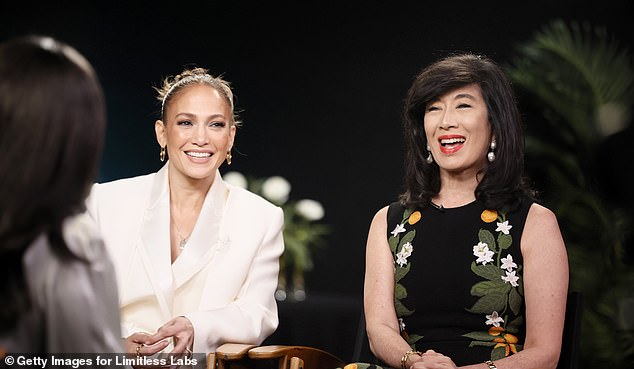 Close to her heart: The actress and performer recently opened up to Good Morning America how it important it was for her to team up with the organization to make a change

During a recent interview with Good Morning America, Jennifer expressed why she felt it was important to her to partner with Grameen America.

‘When you get a little bit older, you understand the meaning behind things and you’ve seen enough and you’ve had your own struggle, and seen enough of injustices,’ she expressed.

‘I just feel like this country needs more love and positivity, and people who want to do good things, and are not fighting against each other and who are just giving each other a hand up. That’s important to me,’ the businesswoman added.

The nonprofit organization is based out of New York City, and was founded to provide financial assistance and education to women in poverty who want to build small businesses.

In partnering with Jennifer, Grameen America will help achieve their, ‘goal of providing 600,000 Latina entrepreneurs with $14 billion in loan capital,’ reported Forbes. 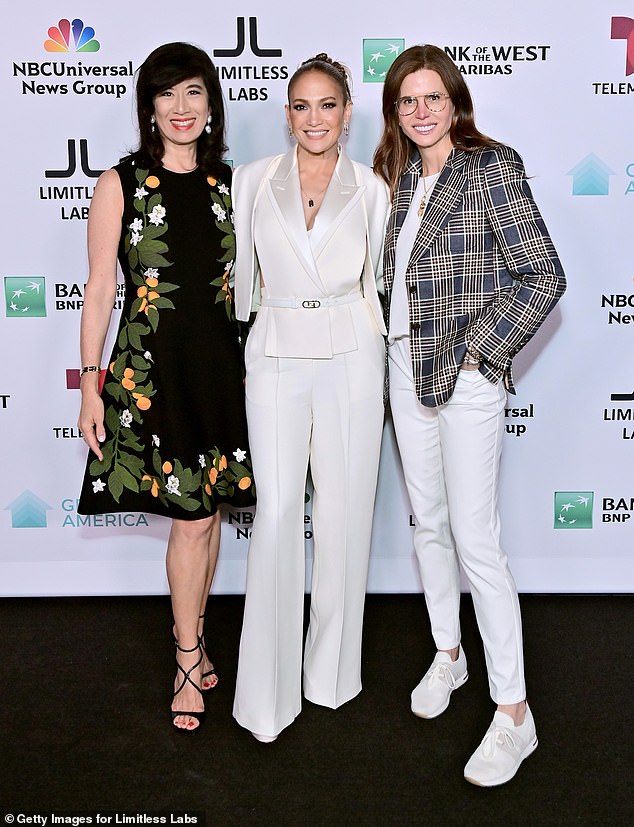 Making a change: Jennifer took another photo with Andrea, along with American television producer, Desiree Gruber 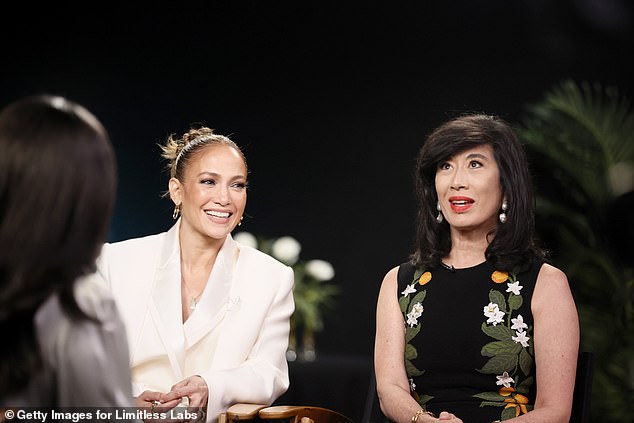 Interview: As the event commenced, Jennifer and CEO Andrea, sat down to talk in detail about their goals for the organization and their partnership

The talented performer also informed Forbes, ‘It feels like the only thing holding the Latino community back is financial literacy and access to capital.’

She also expressed her gratitude to the organization, stating, ‘Being Latino in this country has always been a matter of pride for me. I am humbled and beyond grateful to partner with Grameen America. We’re building pathways to employment and leadership opportunities,’ according to the Grameen America website.

‘There’s so much strength in this community and we’re harnessing that. This partnership will create equality, inclusivity and opportunity for Latina women in business.’

Before attending the special event on Saturday, Jennifer has been settling back into her busy schedule after returning from a second honeymoon in Italy. Last month in August, she said ‘I do’ to Ben Affleck during a lavish wedding ceremony at the actor’s 87-acre Georgia mansion.

The two held a more intimate ceremony in July at A Little White Wedding Chapel in Las Vegas. 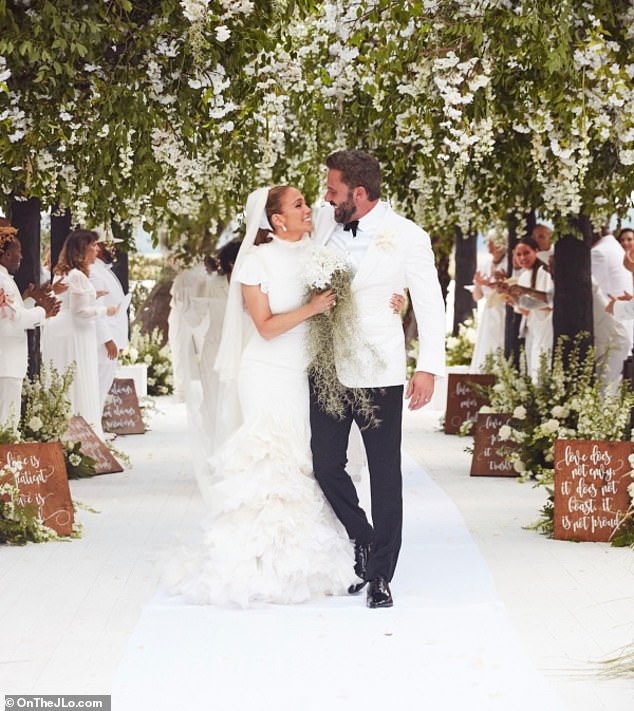 Lovebirds: Jennifer and Ben tied the knot for a second time in front of more family and friends at the actor’s Georgia mansion last month in August 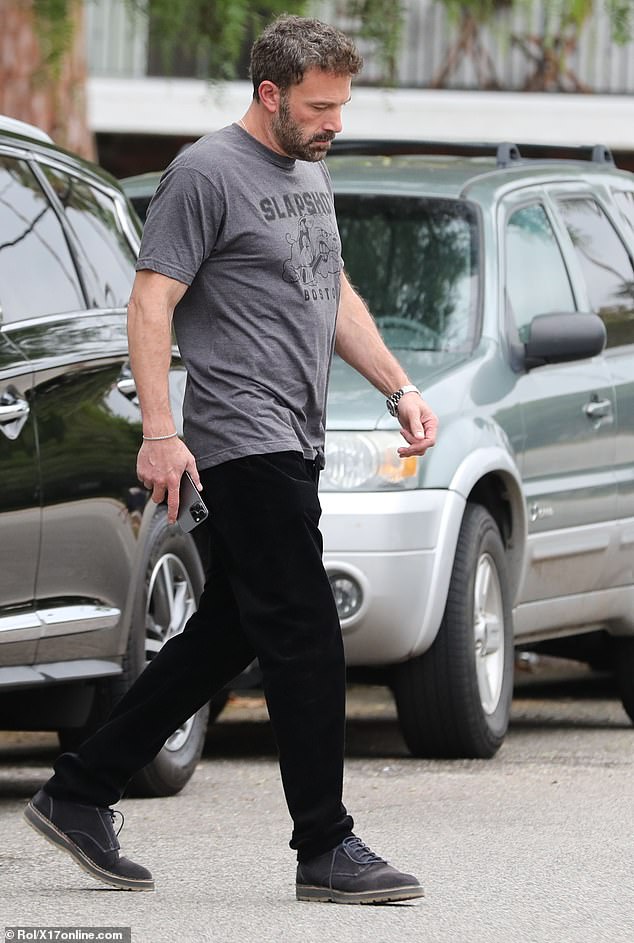 Ben was spotted running an errand on a solo outing while also settling back into normal life earlier on Friday.

The Gone Girl actor kept his look casual, wearing a pair of black jeans along with a short-sleeved, printed gray shirt.

He slipped into a par of dark gray shoes, while accessorizing his ensemble with a silver watch on his wrist.