Jennifer Lopez is known for having a pretty substantial entourage and that made her the butt of some jokes on Thursday’s episode of American Idol.

The 46-year-old singer was astounded to meet blue haired ‘nomad’ Leann ‘Blue’ McIsaac who lives her life on the road.

‘I want to travel and dance all around this entire planet,’ said Blue, who has lived in Hawaii, Turkey and London, among other places.

Outdoor living: Jennifer Lopez said she could ‘never sleep outside’ on Thursday’s episode of American Idol

‘I could never sleep outside,’ J-Lo exclaimed in horror.

‘But you could build a shelter out of all your assistants,’ quipped Harry. 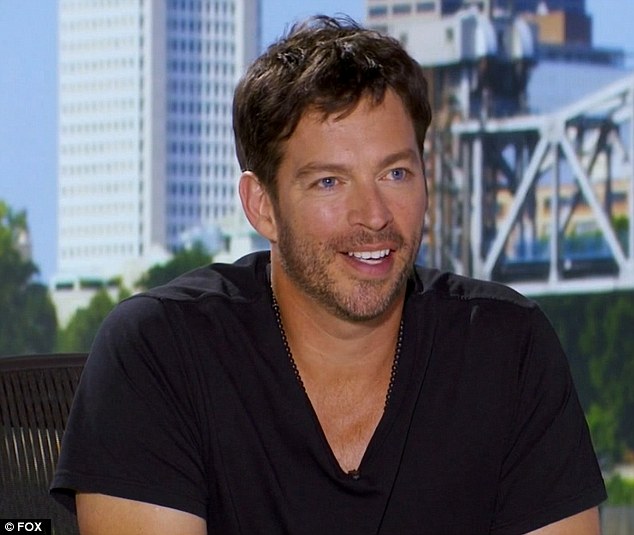 Good one: Harry Connick Jr. quipped that J-Lo could build a shelter out of her assistants

Blue, 23, then made up a song on the spot using words volunteered by the judges.

‘Cute!’ exclaimed J-Lo, likening it to Celtic folk music, while Harry said it sounded like a Jewish prayer song.

‘I’m just glad there are people like you in the world,’ said Harry, while deciding that Blue wasn’t really Idol material. 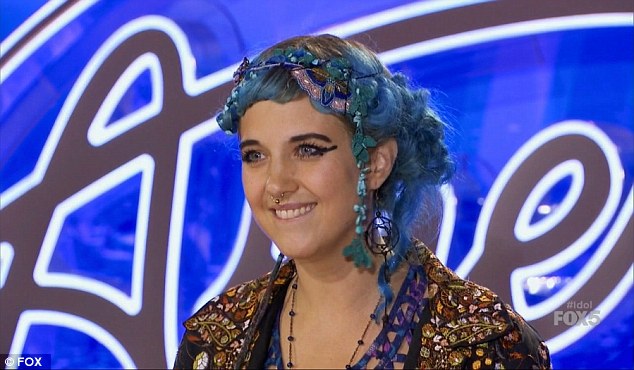 Nomadic singer: Leann ‘Blue’ McIsaac made up a song on the spot but failed to get a golden ticket to Hollywood

While the nomad failed to make it to the Hollywood rounds other singers had more success. 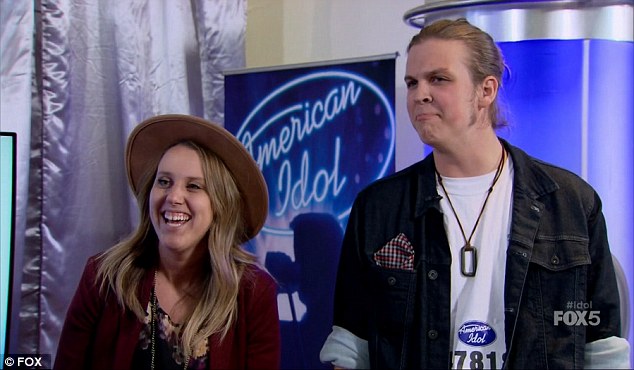 They’re friends: Amber Lynn and James VIII teamed up for their auditions and earned tickets to Hollywood

‘You were rushing man,’ he told him as the rest of the judges praised Amber’s ‘soulful’ vocals.

James, from Provo, Utah, faired better with his singing than his instrumental, so both pals passed to the next round.

Next was Iowa-based auctioneer Emily Wears who sang Bring On The Rain by Jo Dee Messina. 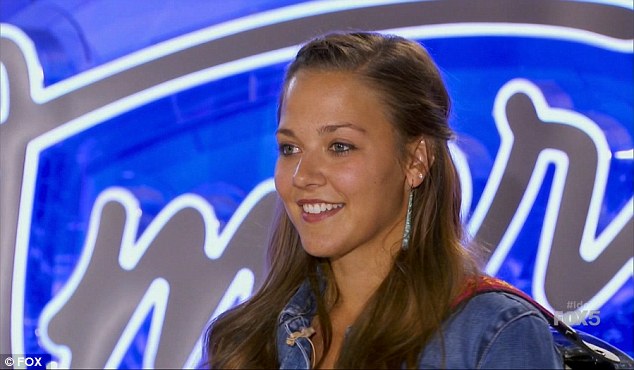 Harry called her a ‘charming young lady’ but said her voice needed ‘a little bit of work’.

‘I thought your voice was sweet,’ J-Lo told the 25-year-old hopeful, but Emily failed the audition due to her wandering pitch.

In Little Rock, Arkansas the judges picked up Chris ‘CJ’ Johnson, a professional musician from Memphis who hoped to up his game. 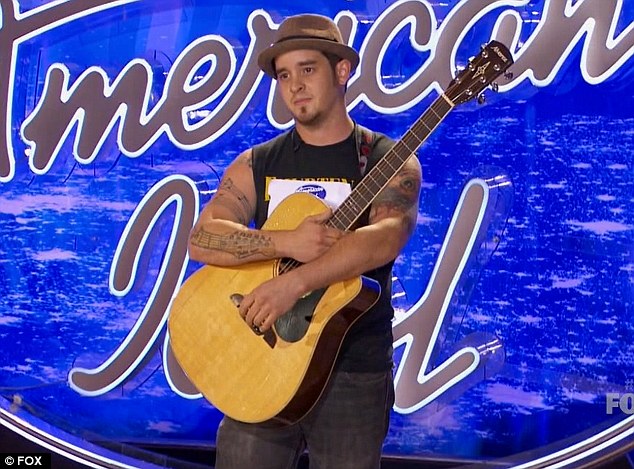 Stepped it up: Chris ‘CJ’ Johnson impressed the judges with his rendition of a Hall & Oates song

He performed the Hall & Oates song You Make My Dreams (Come True).

Keith Urban noted his ‘effortless confidence’ calling him a ‘road warrior’ for his relentless gigging schedule. 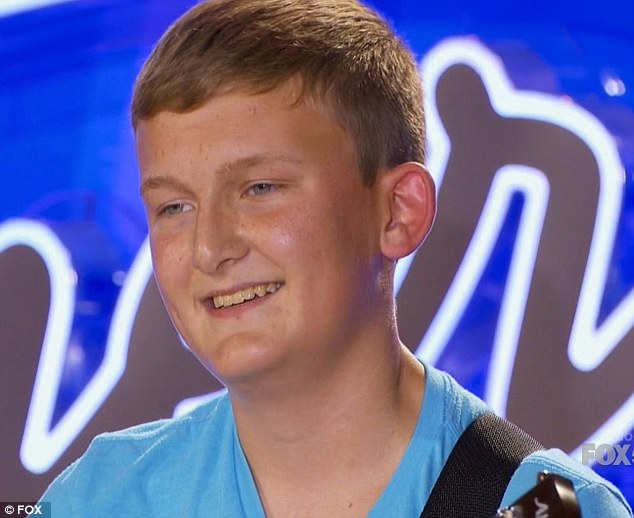 Nailed it: Ethan Kuntz from Nashville, Arkansas earned a ticket to Hollywood after singing an Allman Brothers tune

Keith, 48, was torn but gave Ethan the coveted ‘yes’ pass to Hollywood. 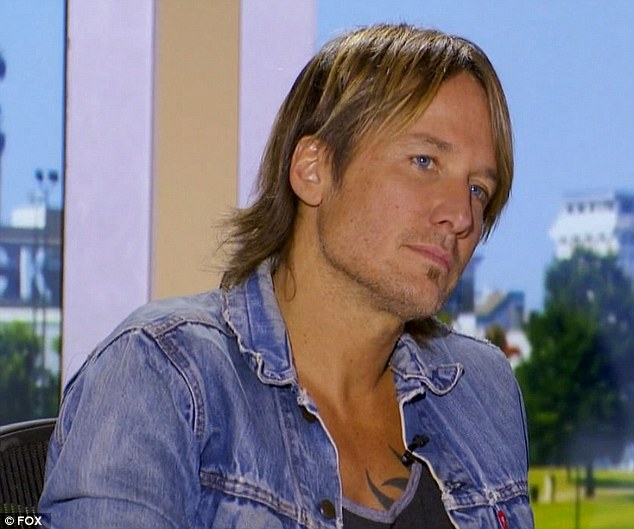 Tough decision: Keith Urban admitted that he was torn over his decision with Ethan

Next was Tennessee ranch lass Mary Williams, who sang Tammy Wynette’s old school country track, Til I Can Make It On My Own.

‘I was missing the feeling, personally,’ Keith told the 23-year-old horse trainer.

Mary made it through, despite having her delivery branded as ‘clinical’ by Harry. 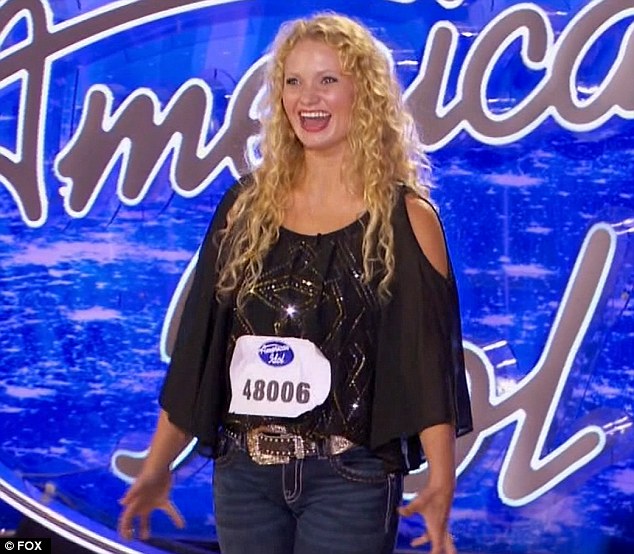 Horse trainer: Mary Wiliiams despite lukewarm reviews made it to Hollywood

Denver Nuggets in-game host Xavier Soller hyped up the panel by passing a small basketball around.

After struggling with her ‘very tight dress’ J-Lo managed to get the ball through the hoop.

Xavier, 26, then sang the Garth Brooks hit Friends In Low Places, but got a resounding ‘no’ from all the judges. 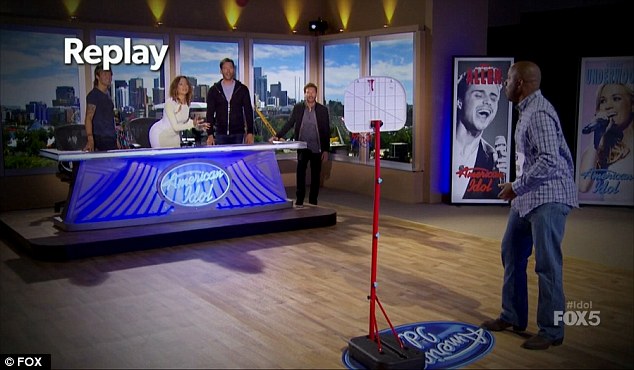 Nice shot: Jennifer was the only one of the judges to sink a ball through the hoop

She belted out Happy by Pharrell and earned a golden ticket.

Next up was humble 17-year-old Tommy Stringfellow, who comes from a family that helps orphans and other children in foster care. 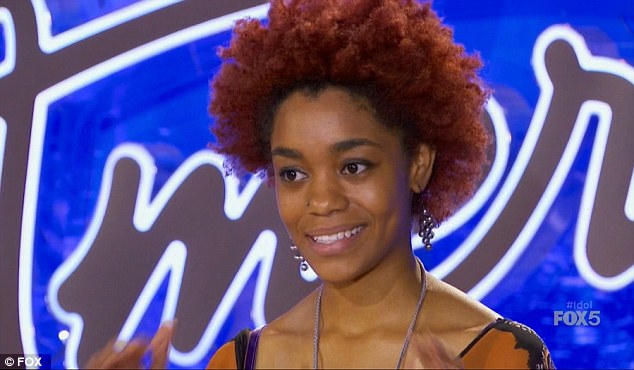 Happy song: Terrian got a ticket to Hollywood after her rendition of Happy by Pharrell

He wore braces and khaki pants for Give Me Love by Ed Sheeran and impressed the judges.

‘I like your vibe,’ said Keith as he progressed to Hollywood with a triple ‘yes’ vote.

Dance teacher Tank, 29, was full of vibrancy and had even invented a class called Tank-ercise to lose weight. 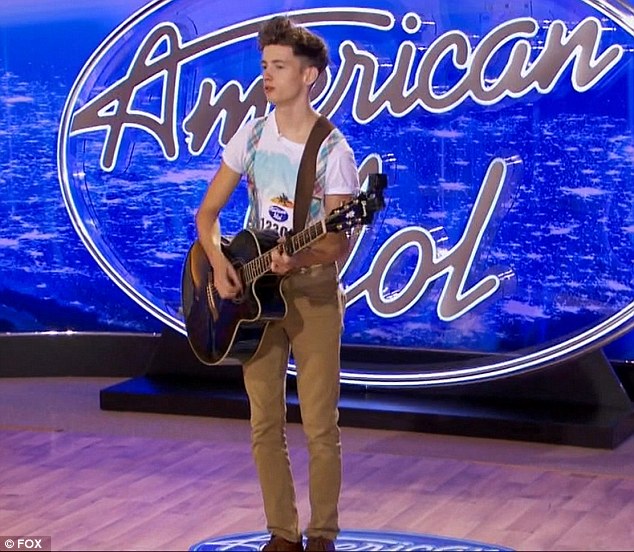 Teen talent: Tommy Stringfellow took on an Ed Sheeran song and earned a ticket to Hollywood 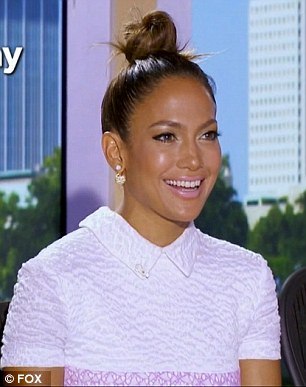 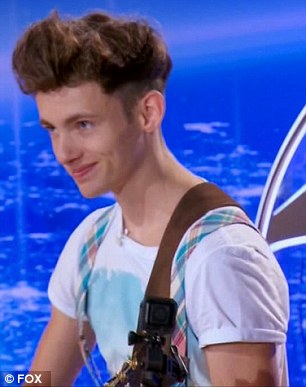 The look: J-Lo couldn’t help but react when Tommy threw a look in her direction

Tank, aka Tywan Jackson, showed the panel some moves before his strong vocal audition of Luther Vandross.

‘Great job…one of my favourites,’ J-Lo told the Ohio native, who sailed through to the next round.

Flight instructor John Wayne Schulz, 27, was returning after a try in season 10, when he was beaten by Scotty McCreery. 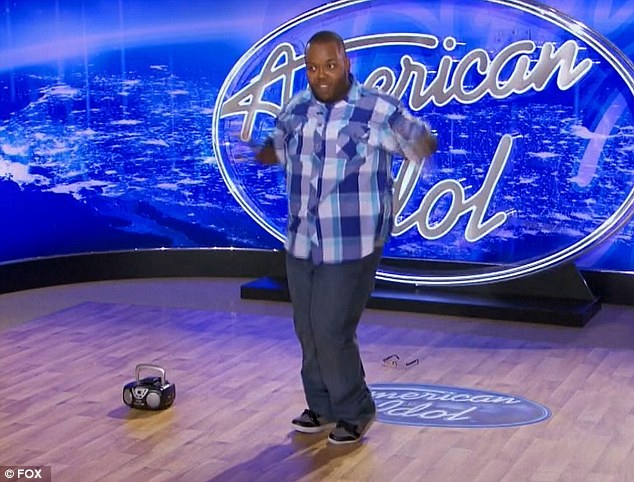 Tank moves: Tywan ‘Tank’ Johnson showed off his dance moves before gaining a ticket to Hollywood

He said it was his mother’s dying wish for him to win Idol.

‘That was a perfect, succinct performance,’ said Harry as John won a golden ticket to Hollywood. 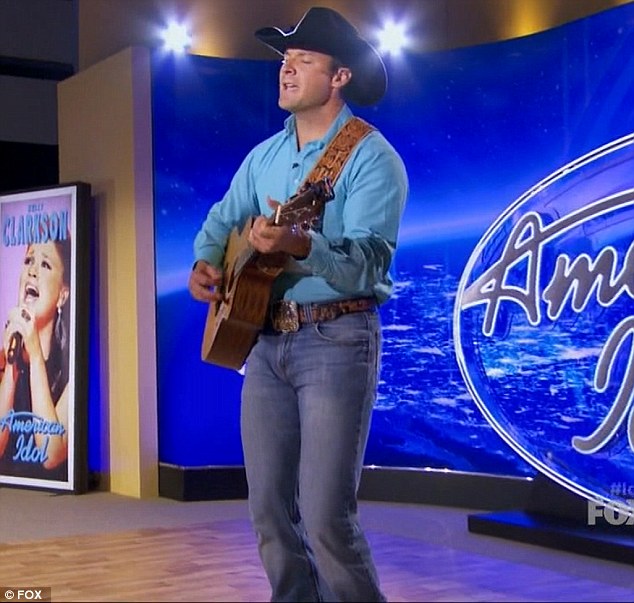 He’s back: John Wayne Schulz returned after making a run previously in season 10

Leah Harbert hoped to ‘become the next Britney Spears’ by warbling Chain Of Fools.

‘Can you stop it please,’ cringed J-Lo as she was sent packing.

California girl Jordan Simone, 15, had more luck with her rendition of Who’s Lovin You by the Jackson 5. 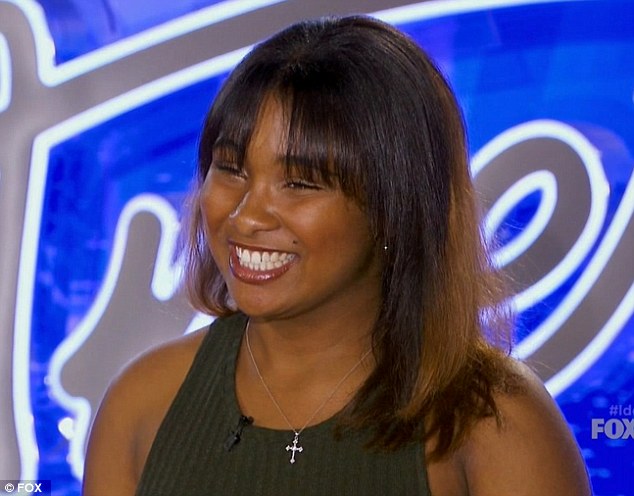 Age defying: Jordan Simone, 15, had the judges believing she was much older

‘She don’t sing 15 either,’ J-Lo told the Los Angeles teen, who the judges thought looked ‘at least 25’.

‘I’m speechless,’ said Harry, as she earned her way forward.

Bearded Jake Dillon ‘got married at 18’ and already has two young kids. 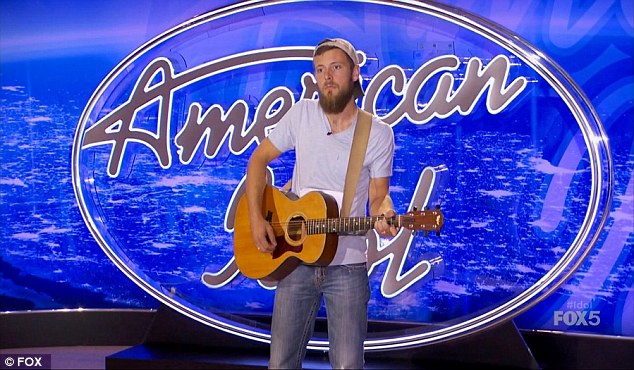 Father of two: Jake Dillon has two young children and received a ticket to Hollywood after singing Danny’s Song

‘I’m so worried that musically you’re going to get killed out there in Hollywood,’ said Keith, who said he liked the plumber’s apprentice ‘as a guy’. 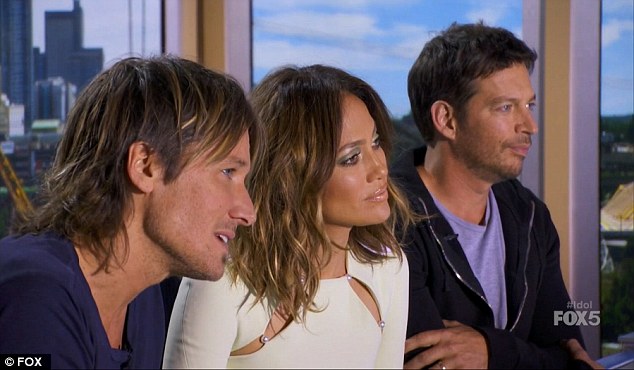 Final season: Keith, Jennifer and Harry returned for the 15th and final season of American Idol 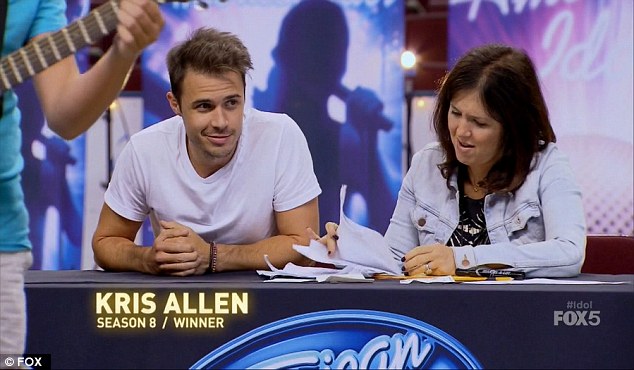 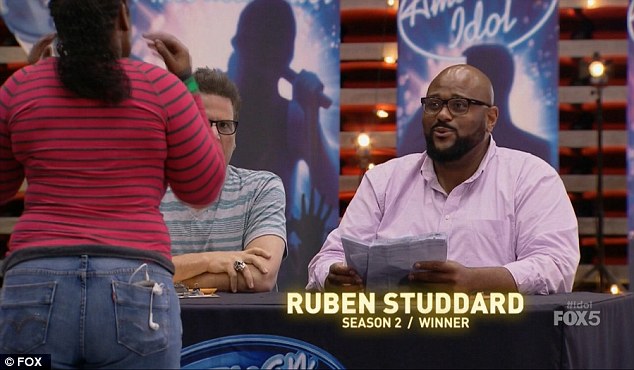 Fan favourite: Ruben Studdard who won season two also was on hand for the auditions

Chilled out Hawaiian beauty Ashley Lilinoe said she likes to ‘put out the love energy’.

‘Great song choice,’ Keith told the Kane’ohe native, who got yes votes from the men but a ‘no’ from Jen. 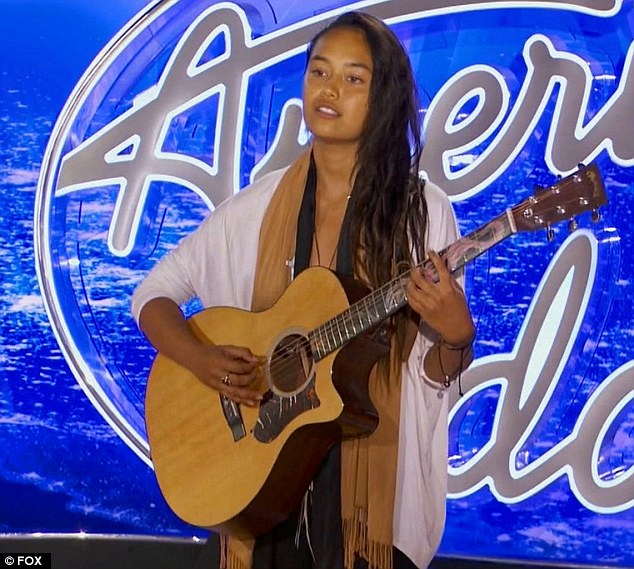 Chilled out: Ashley Lilinoe from Hawaii was definitely the most laid back contestant

Andrew Nazarbekian, 20, flew all the way from Russia to audition with an Adele song.

The student was successful and snapped a selfie with Ryan Seacrest on the way out.

The last contestant of the night was former drug taker and Kentucky native Elvie Shane. 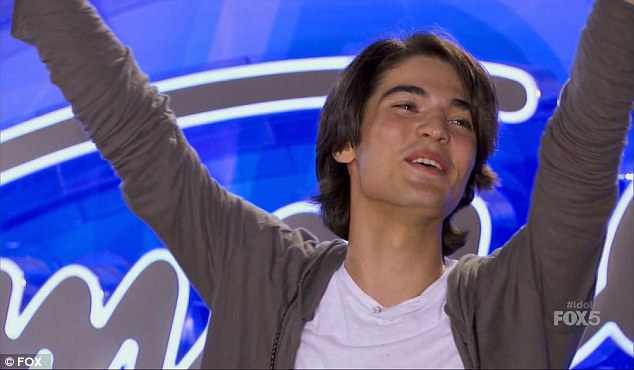 Long flight: Andrew Nazarbekian flew from Moscow to try out for the show

He sang House Of The Rising Sun to make his ‘wife and son proud’.

‘You have a real gift to be able to sing that high,’ said Harry as Elvie was given a golden ticket.

The 15th and final season of American idol will continue next week on Fox. 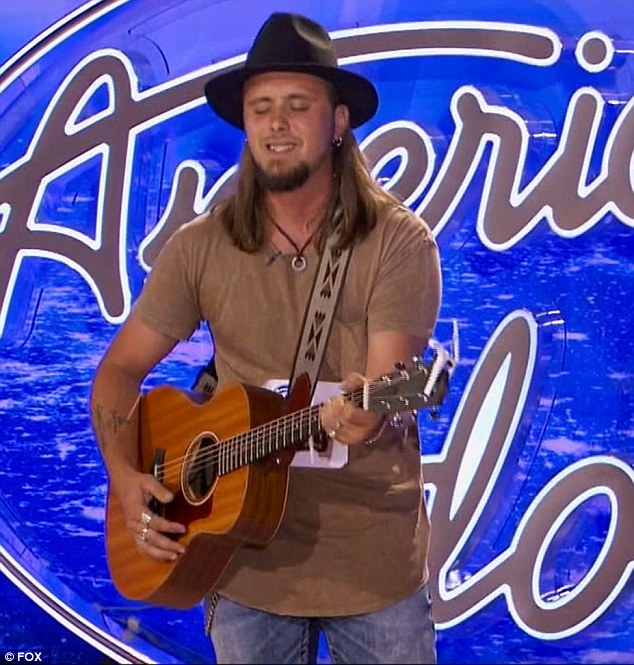