Jennifer Lopez has been putting her body and vocals to the test during rehearsals for her much-anticipated performance with Shakira during the Super Bowl LIV Halftime Show.

But JLo got to enjoy a little down time during a relaxing day at the horse track with fiance Alex Rodriguez and some of their kids on Saturday.

The high-profile couple oozed a spring fresh look on another sunny and warm day for the 2020 Pegasus World Cup Championship Invitational Series at Gulfstream Park in Hallandale, Florida.

Day at the horse races: Jennifer turned more than a few heads when she made her grand arrival at the 2020 Pegasus World Cup Championship Invitational Series in Hallandale, Florida 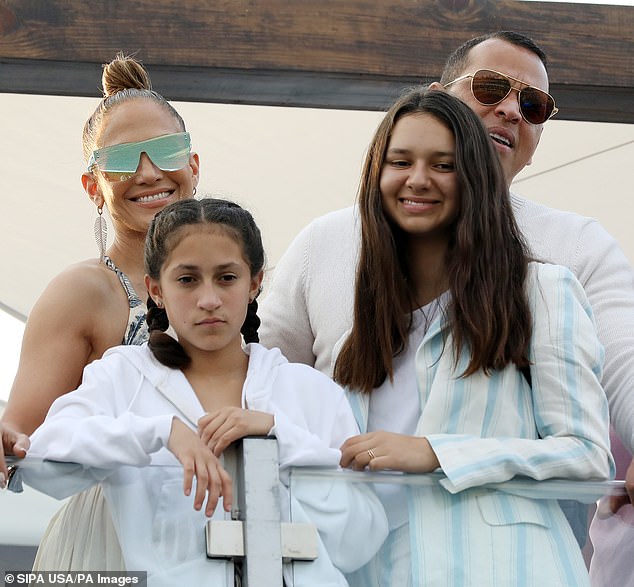 Family time: JLo and A-Rod also brought along three of their kids

The number showcased her cleavage with it’s tight fit along her upper body, while flaring out from the waist down with a creased design.

With a fresh glow, the Hustlers star rounded out the ensemble with platform heels, a pair of mirrored sunglasses and had her long tresses pulled back into a tight top bun. 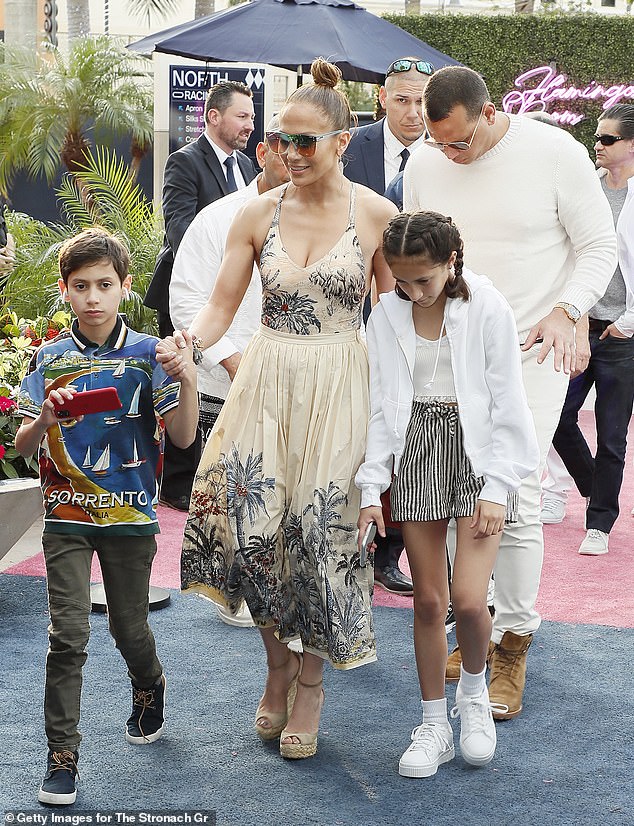 Superstars: The place was buzzing with the celebrity couple arrived with JLo’s twins Maximilian and Emme and A-Rod’s daughter Natasha (not pictured) 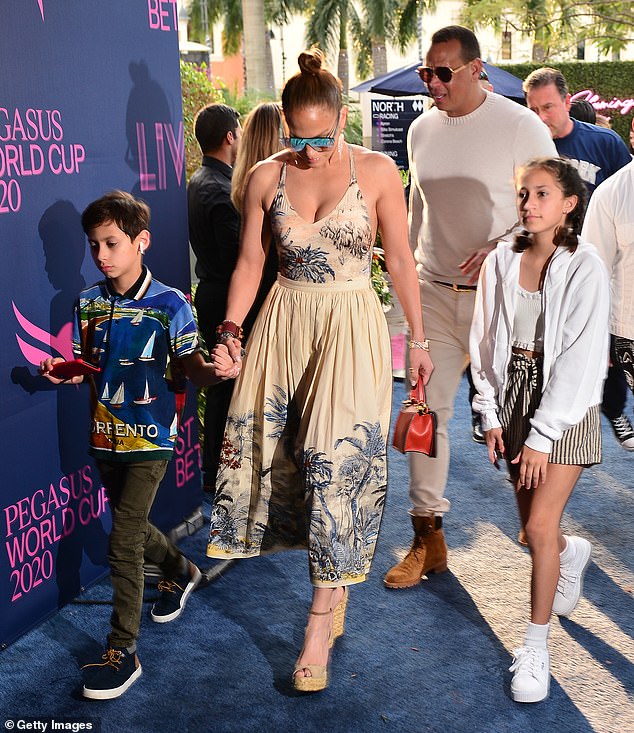 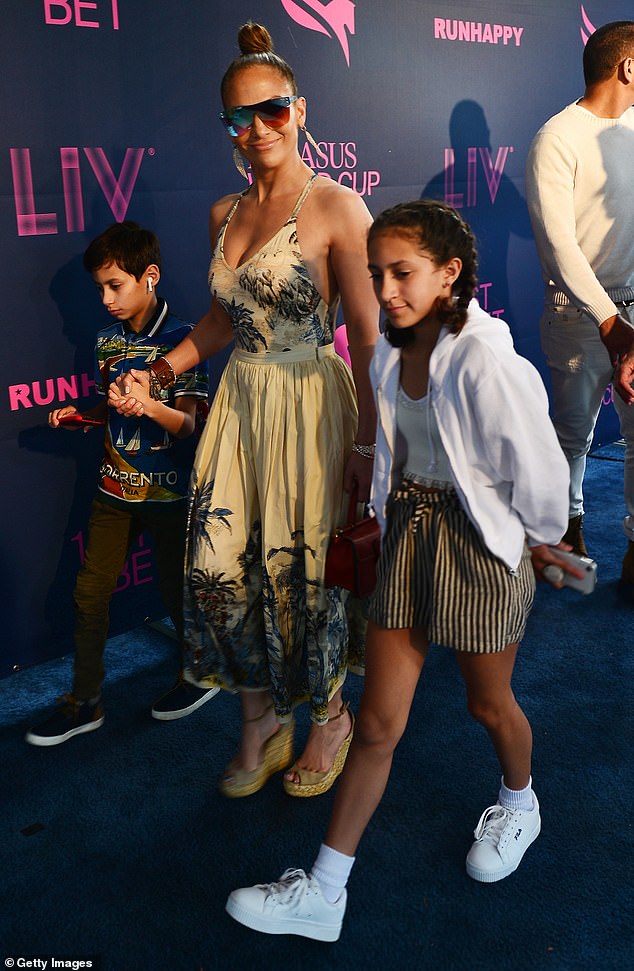 Stylish: The number showcased her cleavage with it’s tight fit along her upper body, while flaring out from the waist down with a creased design 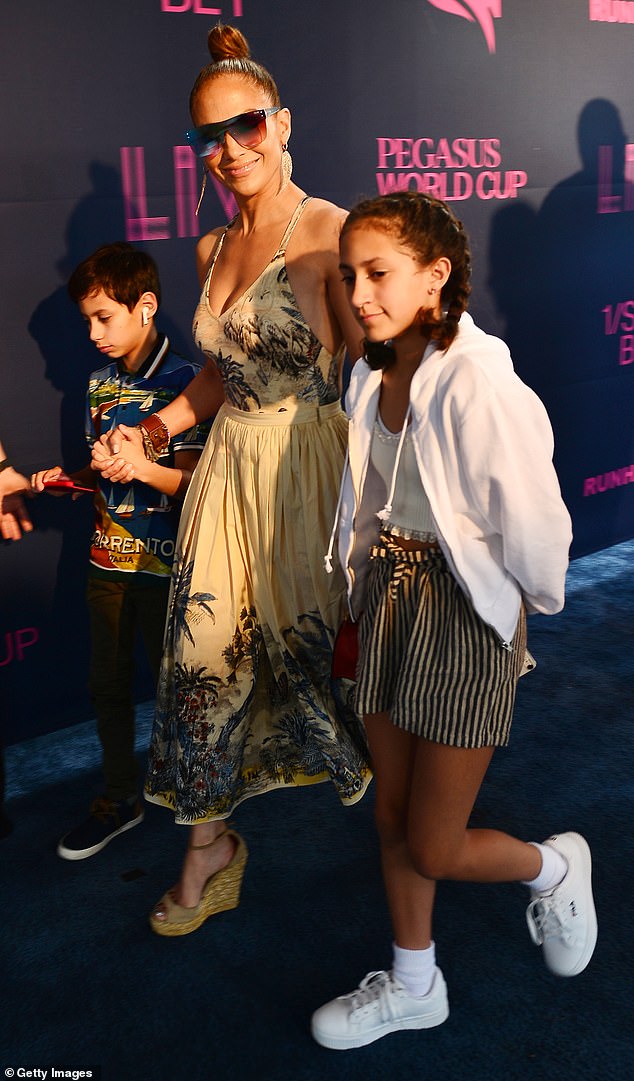 Glowing: JLo flashed a big beaming smile for photographer when she arrived with twins Emme and Maximilian, 11, whom she shares with ex-husband Marc Anthony

Keeping with the spring theme, Rodiguez, 44, opted for white jeans with a white fitted sweater. 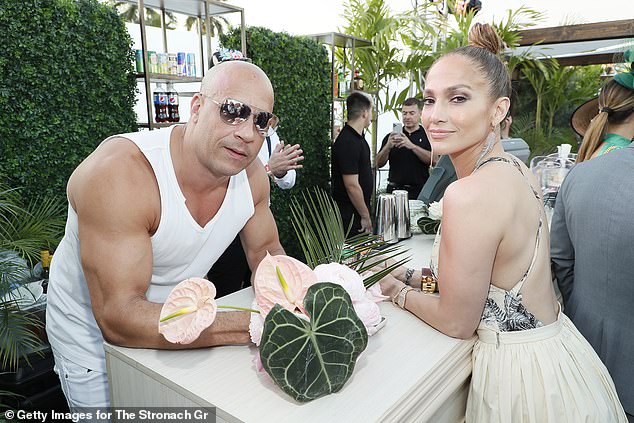 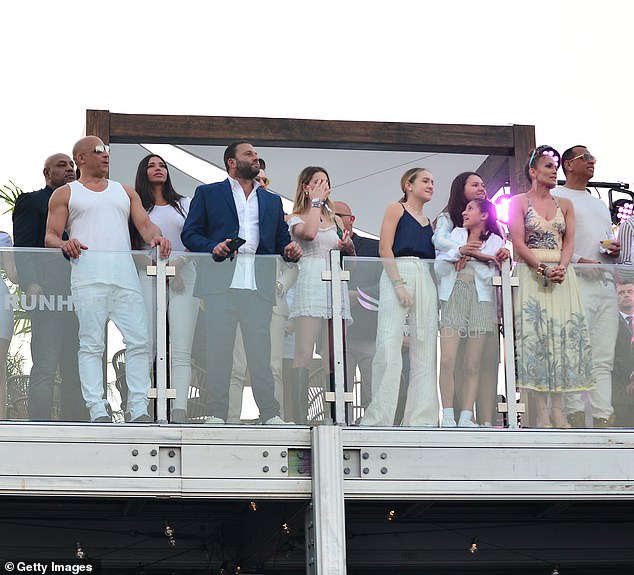 And they’re off! Diesel also took in some of the races with Lopez and Rodriguez 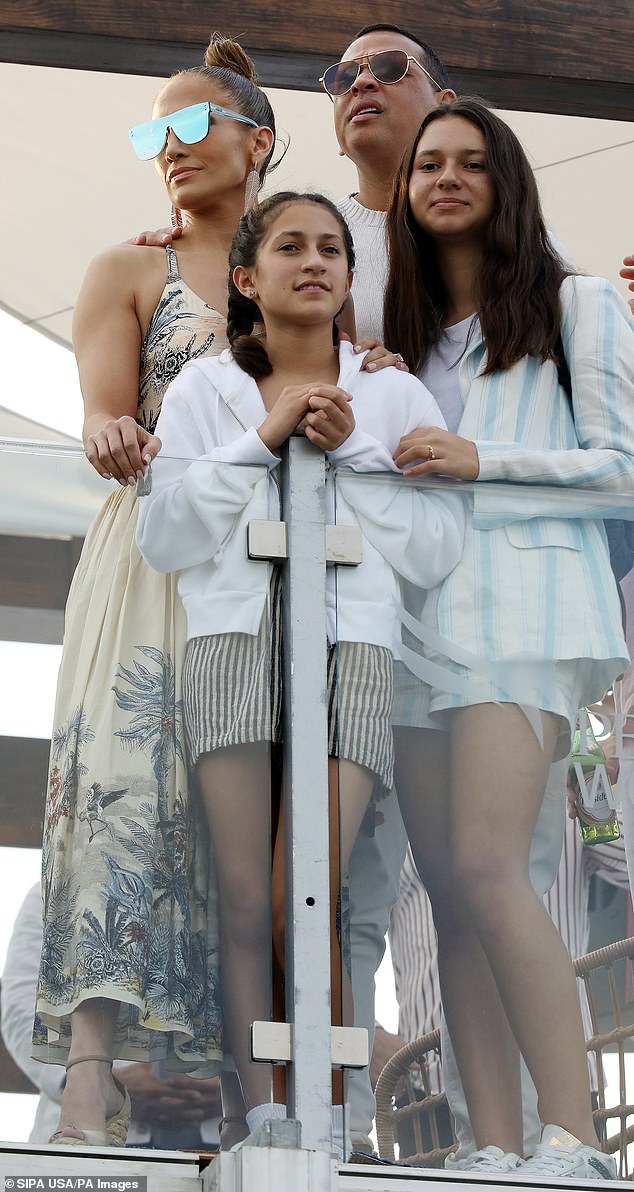 Proud parents: The couple kept their young girls close to the vest 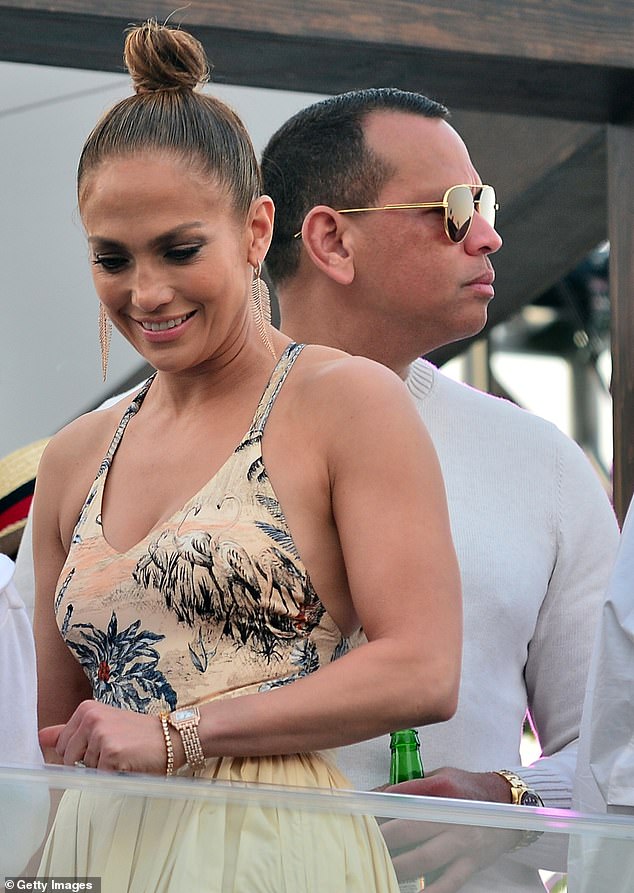 The twins, whom Lopez shares with ex-husband and singer Marc Anthony, also got to spend time with soon-to-be step-sister Natasha Rodriguez, 15, who also looked spring-ready in white and blue shorts and a matching blazer.

On more than one occasion, the couple were joined by actor Vin Diesel.

Like A-rod, the Fast & Furious star was also decked out in all white, which included his trademark tank top to show off his toned and ripped biceps and shoulders.

All of the work Lopez and Shakira have put into their preparations will be on full display when they perform during halftime of the Super Bowl between the Kansas City Chiefs and San Francisco 49’ers on Sunday, February 2 in Miami, Florida. 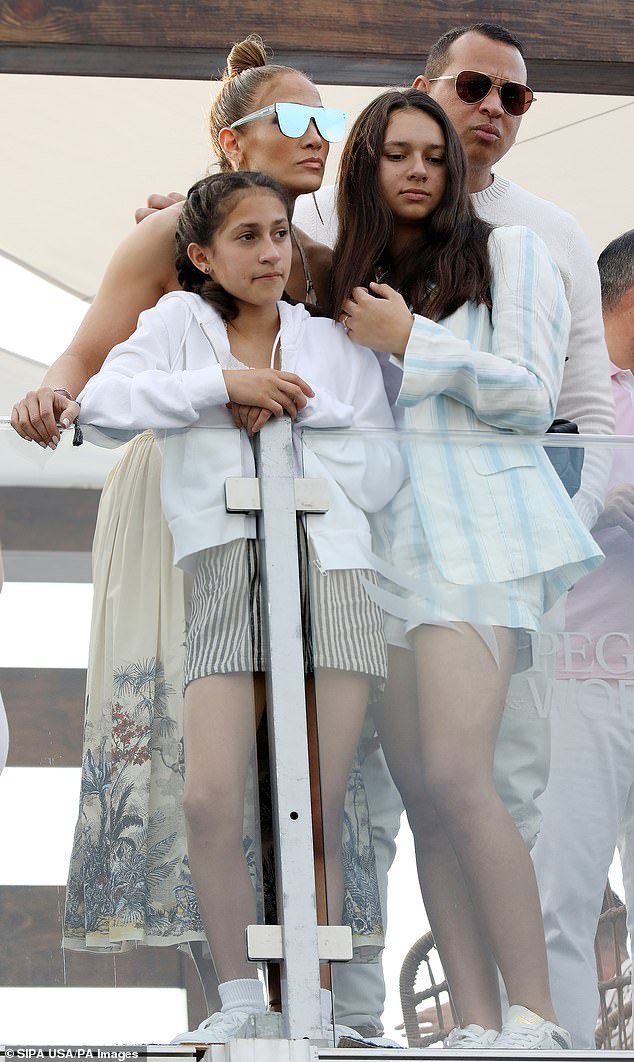 Papa bear: Along with Natasha, A-Rod also shares daughter Ella, 11, with ex-wife Cynthia Scurtis; the former couple were married from 2002-2008 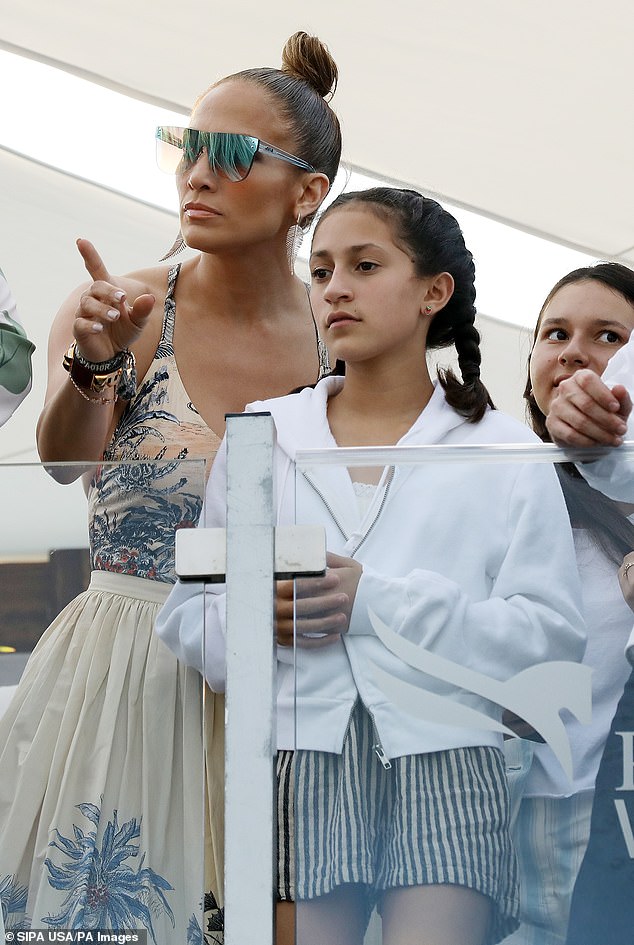 Drama: The Hustlers star seemed to be very enthusiastic during the races 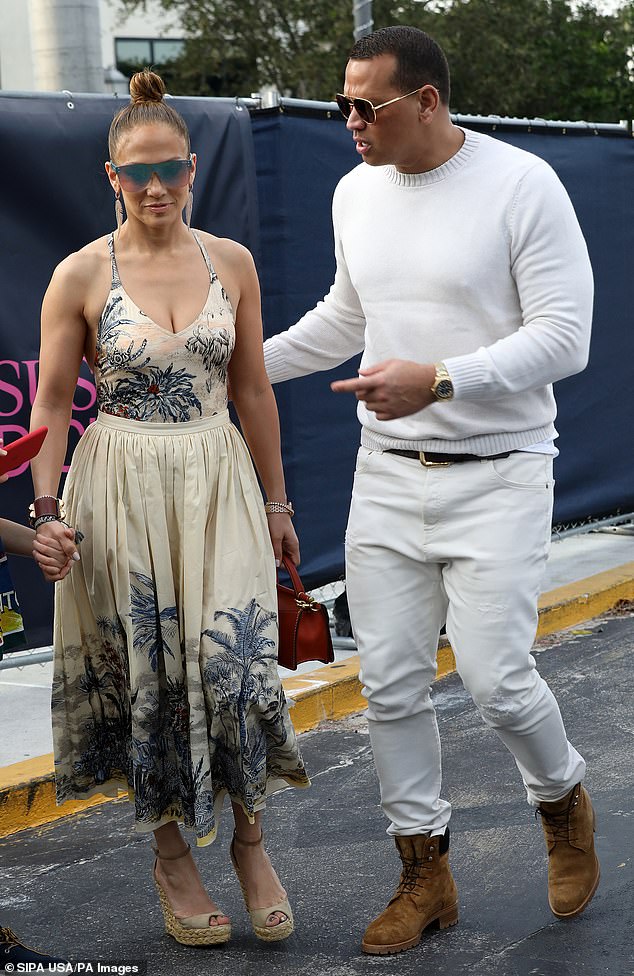 Getting hitched! The couple announced their engagement in March 2019