Chile through the eyes of its greatest poet: A walk in the footsteps of Pablo Neruda – in Santiago and Valparaiso

By Jenny Coad for the Daily Mail

Pablo Neruda is a hero in Chile.

He won the Nobel Prize for literature in 1971 ‘for a poetry that with the action of an elemental force brings alive a continent’s destiny and dreams’.

His funeral in 1973, where people came out onto the streets to follow the cortege, was the first mass movement against the Pinochet regime. And a new film about his life is now in cinemas.

Chapter and verse: Pablo Neruda is fondly remembered in his three eclectic homes in Chile – in the capital Santiago, in the port city of Valparaiso (pictured), and on Isla Negra

If you go to Chile, you can really get a feel for his flair.

Because the poet is fondly remembered in his three, eclectic homes in the capital Santiago, the port city Valparaiso and on Isla Negra, on the coast south of Valparaiso, where he is buried.

I don’t manage the latter, but imagine it to be as full of surprises as his two city retreats.

They tell of a man who loved to party and delighted in collecting.

‘My real profession is a builder’ he once said. ‘I built my house as a toy and I play with it from morning to night’.

After his death, the houses were looted and destroyed by Pinochet’s supporters, but Neruda’s wife Matilda made it her mission to restore them to their former glory. 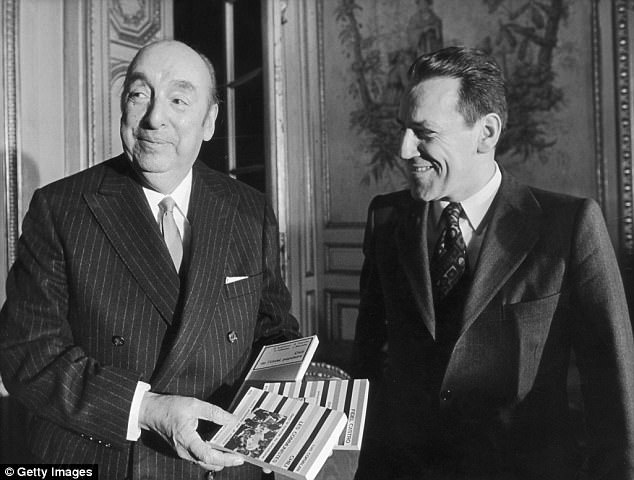 Respected: Neruda (left) with French publisher Lucien Seve in 1972, just a year before his death

She even succeeded in returning treasured objects.

Neruda adored the sea and nautical nods abound. There are portholes all over the place and in his Valparaiso home the bar (he had one in every house) wouldn’t look out of place on a vessel.

The glasses that line the shelves are said to have belonged to Tsar Nicholas.

Neruda only ever served water in coloured glass because he believed it tasted better that way.

And, when friends gathered in his lofty Valparaiso dining room to watch the New Year’s Eve fireworks in the bay below, cocktails were served from a ceramic cow. Ever the gregarious host, Neruda believed that ‘eating alone was like eating in a tomb’.

No chance of that here. Above, a corcoro bird from Venezuela is suspended in a Perspex bubble.

Works of art include a peaceful painting by Rousseau and several designs by Fornasetti.

In his Santiago home, called La Chascona (meaning ruffled) after Matilda’s wild hair, there are flicks to amuse guests – a salt and pepper set labelled as morphine and marijuana, a golden apple cooler, a miniature door through which Neruda would pop out, unexpectedly. And a summer bar complete with tables from a Parisian bistro and a giant shoe.

Enough to surprise even Alice in Wonderland.