JENNY MORRIS got stoned from her teenage son’s chocolate bar

Had my son shut his bedroom window, all would have been fine. But he’d gone out to meet friends, leaving it wide open. I noticed the howling gale and went in to close it.

The chocolate was just lying on his desk, and it caught my eye. A chunky bar, half out of its gold foil wrapping, with two squares broken off the end. Ooh! The temptation was too much. I grabbed one square and ate it.

I was about to nab the second — except it tasted really weird. Sweet, but with a sour earthiness. I paused and found the outer wrapper in among the mess of his desk. ‘Milk chocolate with cannabis oil,’ it announced. Oh heck!

‘It will just be joke stuff,’ I told myself. My son, Tom, is 18, and has just started at university, but apart from a normal teenage fondness for getting boozed up with his mates, he’s shown no signs of odd behaviour or drug-taking — though he’s a great one for practical jokes.

Was I surprised? Astonished, but no more than by other things he has got up to in the past year, such as ordering fake ID online or dealing in digital currencies. But cross? Not really. Kids will be kids.

So instead of calling to berate him, I went back to my desk. It was 5.30pm and I had just been given a work deadline for the following morning, which was going to be a tight squeeze because I was also going out, for a non-negotiable dinner with my girlfriends.

For half an hour, all was fine. I sent emails and wrote with energy and unusual fluency. But by 6pm, I began to feel strange. At first, it was just a slight disconnect when I moved my head, like the loss of balance that comes with being very drunk.

Uh oh! Maybe this stuff wasn’t so innocuous. I decided to go and get supper ready for the rest of the family before I went out.

Walking down the stairs, I felt unsteady. Just a little spaced out, I decided. But my brain was working fine. There was bolognese sauce defrosting. I heated it up, cooked some spaghetti, and frizzled up diced chorizo to put into the spinach salad I was taking to supper with my girlfriends.

By 6.30pm, my husband was home, and so was our daughter, Tom’s elder sister. Concentrating on acting normal and stirring the sauce, I told them what was up.

My daughter was properly concerned and asked the sensible question: what exactly had I taken?

I had no idea. I texted Tom saying: ‘You know that chocolate on your desk…’

He was on the line in seconds, sounding really worried. ‘Mum, seriously, make yourself sick!’ he commanded. I could hear his mates laughing like hyenas in the background. I giggled and said it was too late.

He gave up on me and texted my husband and daughter, telling them to watch me closely, and that if this was a business dinner, they must stop me from going. His friend, Jack, had got so paranoid on this stuff he had ended up in A&E.

The silly thing is, I’m such an old square that I have made it to my 50s without ever taking drugs, so I had no idea what I was in for. The nearest I’d got was watching a joint circling a friend’s dinner table in 1985.

Now there was a heavy pressure across the back of my head, behind my eyes. No wonder it’s called being stoned — I feel like I’ve been hit on the head with one, I thought crossly, trying to drain spaghetti. My fine motor skills were clearly going to pot, pun intended.

‘I thought dope was meant to be fun,’ I moaned to my daughter. ‘I feel terrible.’

‘It does seem to depend on the mood you are in when you take it,’ she advised.

What was her experience of cannabis? I asked, feeling astonished even to be having this conversation. Not much, she said — but clearly more than mine.

It was hard to concentrate on what she was saying, not least because my hearing seemed extra sharp and I was distracted by the noise of the bolognese glopping as it simmered on the other side of the kitchen. How peculiar.

Reasoning there was nothing I could do except ride this one out, I insisted I was fine to go out — I’d already made the salad and I couldn’t let my friends down — so my husband drove me the 500 yards to my friend Bea’s house, and briefed her on what had happened while I stood blinking owlishly in her doorway.

She gave me a very old-fashioned look. ‘I’m absolutely fine,’ I said, then knocked over the glass of water she gave me. 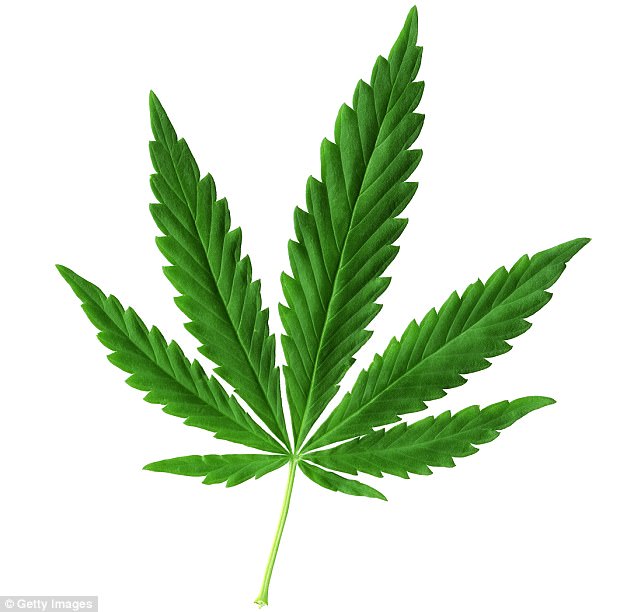 By 6pm, she began to feel strange. At first, it was just a slight disconnect when she moved her head, like the loss of balance that comes with being very drunk (file photo)

In the cab on the way to meet our other friend, I thought I was making perfect sense, despite a touch of motion sickness.

Bea thought otherwise. ‘You are so not all right,’ she said, leaning forward to tell the cabbie to double back to take me home.

‘So kind of you,’ I mumbled as she held my arm and steered me, still clutching my dish of spinach salad, back through my own front door. I sat at the kitchen table feeling slightly in disgrace and ate my cold salad.

It tasted OK, though it probably hadn’t been a good idea to pour the hot oil from the chorizo in there. ‘I did wonder why you were doing that,’ said my daughter.

Oh dear. It was only 7.45pm but I was feeling worse and worse. At least with alcohol, I know where I am on the scale of sober-to-inebriated. Now, I was clueless.

Half the world, I told myself, thinks cannabis is so innocuous it should be legalised. You’ll be fine. Yes but, said another voice in my head, modern dope is so much stronger than it used to be. What if it’s like that Spice stuff that just poleaxes people?

‘How long will this go on for?’ I asked my daughter.

She didn’t know. ‘When my friends take it, they tend to keep on smoking, so it goes on for quite a bit.’ My husband tried telling me about his day, but my brain kept hanging up between thoughts, just like it’s meant to do in meditation but never does.

I tried to help with the washing up but my husband shooed me away. ‘Go. To. Bed.’

It was far too early. I drifted to the tumble dryer to sort laundry, increasingly amazed by different textures of the socks I was handling. Who knew those grey ones were so soft?

‘OK,’ chipped in the logical part of my brain, still struggling to assert itself. ‘You’ve got a heightened sensation of touch. Make a note. Add that to the loss of fine motor skills and the stuff that’s going on with your hearing.’

By 9pm, I gave up, crawled into bed and lay on my back. Aah! That was better.

My limbs felt as if they were melting into the mattress. My head felt floaty. Belatedly, I could imagine myself lying in the grass on a summer afternoon like this, relaxed and listening to music. That could be sensational.

‘I think I need to listen to The Dark Side Of The Moon,’ I announced to my husband, before instantly falling asleep.

The next morning, I emerged cautiously from bed and was relieved to find I seemed to be fine, if a bit dopey.

And I’d had nine hours of sleep. Wow! There was a silver lining.

My son, to his credit, was mortified. When he got home he enfolded me in a huge bear hug, repeating his apologies.

I’m relieved to have emerged from this deeply unpleasant experience unscathed, but I am also astonished that he would bring this stuff into our house.

When we have both recovered ourselves, I am going to sit him down for a big chat about the seriousness of breaking the law and the very real risks associated with drug-taking — even of a substance so many of his friends seem to regard as innocuous — and reinforce the dim view I take of all this.

I for one will never be touching the stuff again. Nor will I be nicking any stray chocolate that I find….

All names have been changed to protect identities.