The former Top Gear presenter, 60, wrote: ‘A level results not great? Don’t worry, I got a C and 2 Us and I’m currently building a large house with far reaching views of the Cotswolds.’

He added: ‘And I didn’t even get the chance to insist the government gave me three As instead.’

Clarkson posts a similar tweet to his 7.2 million followers on A-level results day every year to reassure students who didn’t get the results they wanted.

Jeremy Clarkson poked fun at A-level results chaos in his annual Results Day tweet after a last-minute Government change meant students could take grades based on past performance, mock grades or choose to sit exams in the autumn

Teachers were asked to submit a grade for each pupil based on their performance over the year and in prelims and to rank students in order after exams were cancelled for the first time this year due to the coronavirus pandemic.

After a last-minute decision from the Government, pupils in England could claim their mock grades as their final grades if they were higher, or choose to sit autumn exams.

However, on Tuesday night, less than 48 hours before results were released, Education Secretary Gavin Williamson announced the potential grounds for appealing these grades were being widened.

It came after Nicola Sturgeon abandoned similar arrangements in Scotland after fury that around 125,000 pupils had been downgraded. 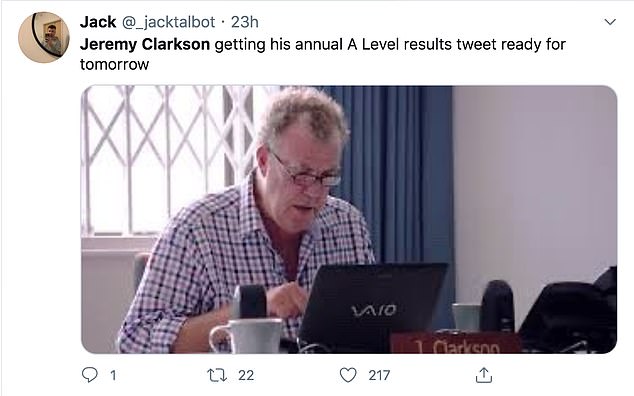 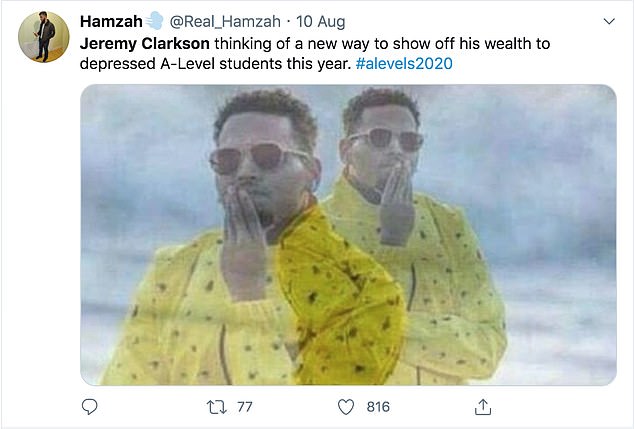 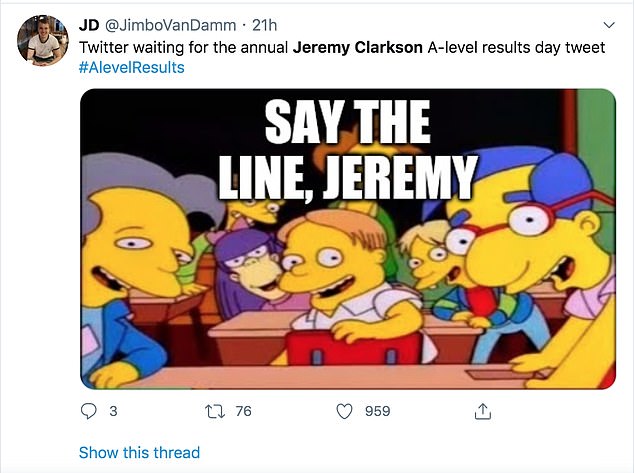 Regulator Ofqual moderated the marks suggested by teachers to ensure the overall results were in line with those in previous years.

When students opened their results this morning, the proportion of A-level entires awarded an A grade or higher rose to an all-time high, with 27.9 per cent securing the top grades this year, figures for England, Wales and Northern Ireland show.

However, exam boards downgraded nearly two in five (39.1 per cent) of pupils’ grades in England, according to data from Ofqual.

This amounts to around 280,000 entires being adjusted down after moderation.

The figures from Ofqual show that in England a total of 35.6 per cent of grades were adjusted down by one grade, 3.3 per cent were brought down by two grades and 0.2 per cent by three grades. 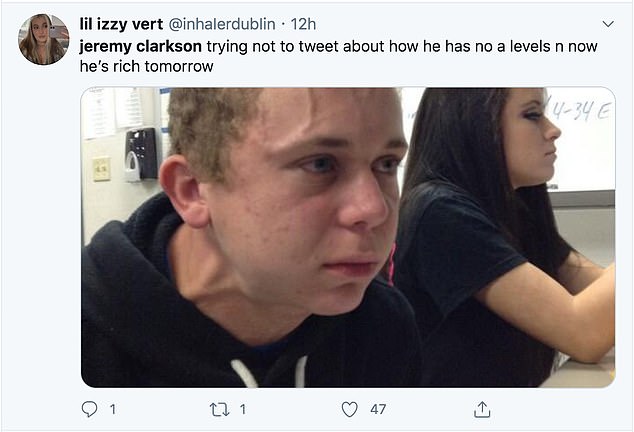 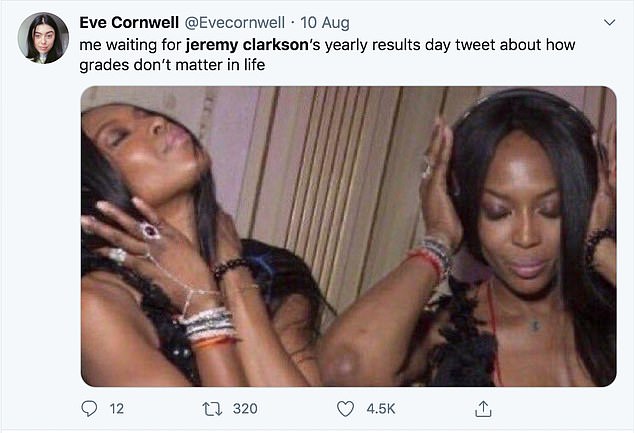 Teachers will send emails to pupils today revealing the predicted grades they thought they deserved for their A-level results.

Clarkson posts the same tweet every year for students nervous about collecting their results and Twitter users have started to catch on.

Many wrote about how Clarkson uses it as an ‘excuse to boast about how wealthy he is’ despite his C and two Us at A-level.

In 2018, he wrote: ‘Don’t worry if your A level grades aren’t any good. I got a C and 2 Us. And I’m sitting here deciding which of my Range Rovers to use today.’