Jeremy Clarkson’s social media network DriveTribe that he set up with fellow TV hosts James May and Richard Hammond lost £12.5million in its first two years of business

Clarkson and co set up ‘DriveTribe’ to considerable fan-fare in November 2016 but new accounts filed this week show the company lost £4.2m in its first year and £8.3m in its second.

‘DriveTribe’ is a kind of Twitter for petrol heads where users set up ‘tribes’ to follow posts and videos. On the website homepage it reads: ‘The digital home for all the motoring under the sun.’

The three Grand Tour presenters all pumped their own money in to the project and post on it almost daily.

Each of the three have their own tribes in which they are ‘tribe leaders’. Clarkson boasts nearly 900,000 fellow tribe members under his rule. His strap line reads: ‘My tribe, my rules.’

A director’s report from the company stated that they were expecting research and development tax credits and forecasts ‘assumed’ that revenues would grow steadily throughout 2018 and 2019. 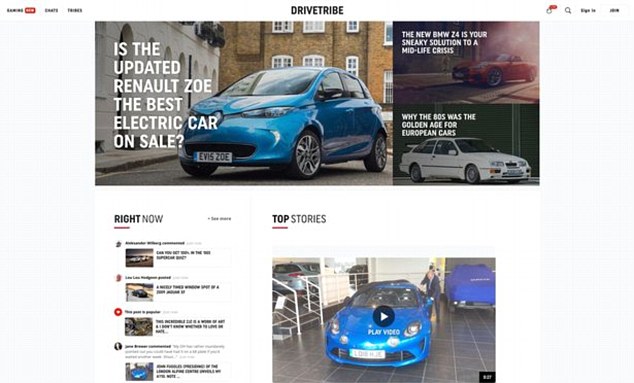 The news comes after Clarkson laughed off reports that The Grand Tour hadn’t been commissioned for a fourth series.

Reports emerged in March that the show, one of Amazon’s flagships, would stop after its third season – due to air later this year.

Clarkson tweeted to his followers that it was ‘hilarious that you believe’ rumours the show would be discontinuing, later branding reports ‘horse****’.

He and his former Top Gear co-hosts Richard Hammond and James May reunited to partner with US retail giant Amazon to launch the programme in 2015.

A three-series deal was signed and The Grand Tour first launched on Amazon’s Prime video platform in November 2016.