‘Is it one rule for young black boys from the Caribbean and another for white boys from the US?’: Jeremy Corbyn suggests Boris Johnson should be DEPORTED as he attacks Government attempts to kick out convicted foreign criminals

Jeremy Corbyn suggested Boris Johnson should have been deported over his own past brushes with the law today as he attacked Government plans to kick out foreign criminals.

In a heated Prime Minister’s Questions exchange the Labour leader insinuated there was a racial element to the decision to send 50 convicted crooks to Jamaica, despite many of them having lived in the UK for decades.

There is fury in the government after the expulsion of more than half of them – including violent offenders – was blocked by the courts after claims that they had been denied access to legal advice.

Mr Corbyn cited the Prime Minister’s past confession to having tried cocaine and being implicated in a planned – but never carried out – attack by an old friend on a News of the World journalist who was investigating him.

In front of a packed House of Commons this afternoon, Mr Corbyn said: ‘If there was a case of a young white boy with blond hair who later dabbled in class A drugs and conspired with a friend to beat up a journalist, would he deport that boy, or is it one rule for young black boys from the Caribbean and another for white boys from the United States?’

In a heated Prime Minister’s Questions exchange the Labour leader insinuated there was a racial element to the decision to send 50 convicted crooks to Jamaica, despite many of them having lived in the UK for decades 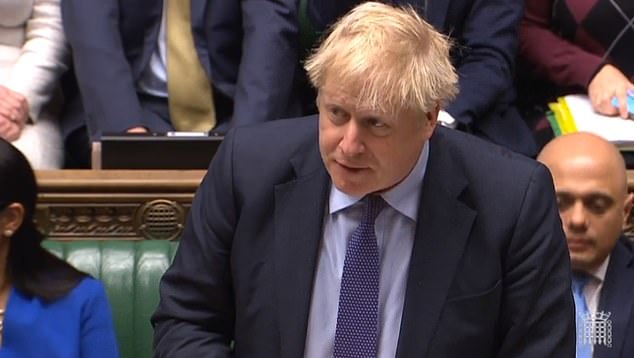 The accusation sparked a blunt response from the Prime Minister, who replied: ‘I think quite frankly that Mr Corbyn demeans himself and by the way besmirches the reputation of the Windrush generation who came to this country to work in our public services, to teach our children in this country, to make lives better for people in this country.

‘He has no right to conflate them with those foreign national offenders that we are deporting today.’

Mr Johnson was born in the United States in 1964 while his father Stanley studied there.

But although he gave up his US citizenship in 2016 he has always been a UK citizen as well, so he would not be liable for deportation under the laws governing the flights.

Last year during the Tory leadership campaign Mr Johnson blustered his way past questions regarding a 2008 admission that he had tried cocaine while a teenage student in Oxford.

He was also linked to a planned assault by old Eton friend Darius Guppy.

At a trial in 1994, a 1990 phone call between the pair came to light in which he agreed to give Guppy, a convicted fraudster, the contact details of a News of the World reporter investigating his business affairs so he could give him ‘a couple of black eyes’.

The attack never happened and Mr Johnson said in 2013 he was just ‘humouring’ an old acquaintance.

The flight to Jamaica was supposed to be carrying 50 people that ministers categorised as having committed serious crimes.

But the plane left for Kingston at about 7.30am yesterday, taking just 17 people on the journey.

Under the UK Borders Act 2007, the Home Office must make a deportation order where a foreign national has been convicted of an offence and received a custodial sentence of 12 months or more.

This is subject to several exceptions, including where to do so would breach someone’s human rights or the UK’s obligations under the Refugee Convention.

In the Commons today Mr Corbyn said the Government had ‘learned nothing’ from the Windrush scandal.

Speaking at Prime Minister’s Questions, Mr Corbyn asked: ‘Does the Prime Minister think that someone who came to this country at the age of five and was the victim of county lines grooming and compelled to carry drugs released five years ago and never re-offended deserves to be deported?’

Boris Johnson replied: ‘I think the whole country would agree that, while I cannot comment on individual cases, it is entirely right that foreign national offenders should be deported from this country in accordance with the law.’