Jeremy Corbyn was forced into a grovelling apology last night as he was branded ‘the poster boy of anti-Semites everywhere’ by a senior Labour MP.

As around 1,500 from the Jewish community protested outside Parliament, accusing the Labour leader of turning his party into a ‘refuge for racists’, he finally said sorry for supporting an anti-Semitic mural on Facebook.

In a letter to the Board of Deputies and the Jewish Leadership Council, Mr Corbyn admitted he had been too slow to act and pledged he would be a ‘militant opponent’ of anti-Semitism. The organisations had accused him of siding with anti-Semites ‘again and again’.

Jonathan Arkush, president of the Board of Deputies, had accused Mr Corbyn of ‘swimming in a sewer that is totally polluted by anti-Semitism’, adding: ‘Finally, Jeremy, take some responsibility. Because Jeremy it’s you, and your leadership, that are responsible for this. Token words, token apologies, are no longer enough. We need to see action’ 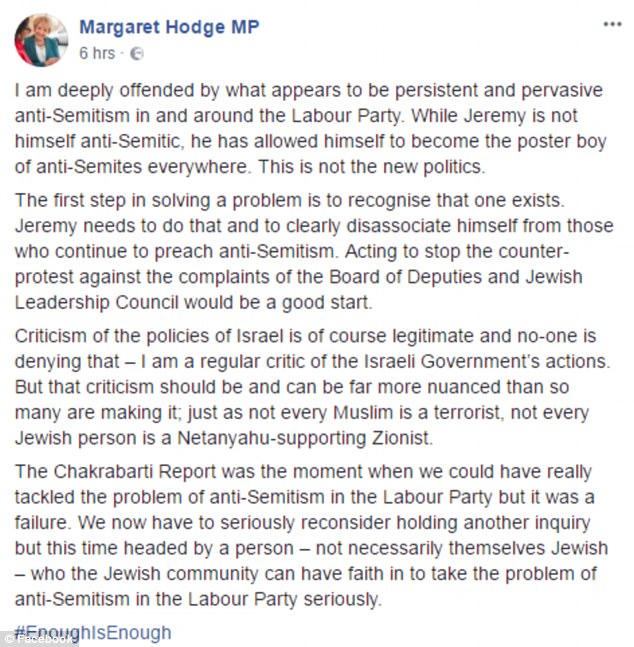 She said: ‘While Jeremy is not himself anti-Semitic, he has allowed himself to become the poster boy of anti-Semites everywhere’

At least a dozen Labour MPs joined the protest. Wes Streeting, MP for Ilford North, said anti-Semitism was a ‘stain on the conscience of the Labour Party’ as he called on Mr Corbyn to take action – such as expelling Ken Livingstone, who has been suspended over accusations of anti-Semitism – instead of issuing ‘mealy-mouthed’ statements.

The Labour leader was a member of a third Facebook group riddled with prejudice against Jews and Israel, it emerged last night.

The group also features an offensive graphic about a ‘solution’ to the Middle East problem. The post suggests that Israel should be relocated to the US.

It was revealed earlier this month that Mr Corbyn had been a member of two other Facebook groups which feature anti-Semitic comments. Screenshots show he was a member of the Palestine Live group until around the time he became Labour leader in 2015.

He was also a member of the History of Palestine Group which features anti-Semitic comments about the Rothschild family.

A spokesman for Mr Corbyn, who is no longer a member of the Labour Party Supporter group, said the Labour leader did not see the anti-Semitic content, adding: ‘Jeremy has never posted in the group, did not follow its content and was not an active participant.’

Around 100 hardline Corbyn supporters staged a counter-demonstration organised by Jewish Voice for Labour. Their spokesman, Naomi Wimborne-Idrissi, suggested the public would think Jews were ‘interfering with the UK’ by attending the protest outside Parliament.

Labour MP Dame Margaret Hodge said she was ‘deeply offended’ by ‘persistent and pervasive anti-Semitism’ in and around her party.

In a Facebook post, she wrote: ‘While Jeremy is not himself anti-Semitic, he has allowed himself to become the poster boy of anti-Semites everywhere.’

In his letter last night, Mr Corbyn apologised for questioning the removal of a controversial mural in the East End in 2012 without studying its content.

He wrote: ‘I recognise that anti-Semitism has surfaced within the Labour Party, and has too often been dismissed as simply a matter of a few bad apples. This has caused pain and hurt to Jewish members of our party and to the wider Jewish community in Britain. I am sincerely sorry for the pain which has been caused, and pledge to redouble my efforts to bring this anxiety to an end.

‘I must make it clear that I will never be anything other than a militant opponent of anti-Semitism.’

Luciana Berger wrote to fellow Labour MPs last night on behalf of the Jewish Labour Movement to warn: ‘We have faced consistent attack from within in our own party. We are told we only exist to weaponise anti-Semitism in order to undermine the leadership.’