Jeremy Corbyn will today hint at fresh taxes on firms that replace people with robots as he calls for a ‘new settlement between work and leisure’.

The Labour leader will use his set piece party conference speech to say that, with automation due to destroy millions of jobs in the coming decades, the state needs to intervene to ensure the benefits are shared across society.

‘We need urgently to face the challenge of automation; robotics that could make so much of contemporary work redundant,’ he will say.

‘That is a threat in the hands of the greedy but what an opportunity if it’s managed in the interests of society as a whole.

‘If planned and managed properly, accelerated technological change can be the gateway for a new settlement between work and leisure, a springboard for creativity and culture, making technology our servant and not our master at long last.’

Labour has previously toyed with the idea of a ‘universal basic income’, which would effectively see everyone put on benefits.

Party sources played down the idea last night. But they did not rule out new taxes on businesses that benefit from automation. 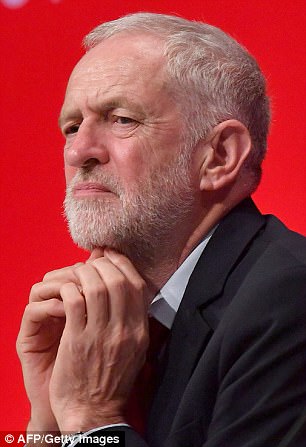 A spokesman for Mr Corbyn said increased use of new technology in the workplace would inevitably boost productivity, and a Labour government would force them to pass on the benefits of that to employees through higher wages and shorter hours.

‘How that pans out is something that is up to political decisions and corporate decisions.’

Mr Corbyn will also highlight Labour plans to offer free education to college students as well as those at university, which will enable people to improve their skills as old jobs disappear.

Mr Corbyn, who has received the status of a cult leader at this year’s conference, will say that Labour is now ‘on the threshold of power’, adding: ‘We are ready for government’.

But, controversially, he will also use the speech to try to weaponise the Grenfell Tower disaster by blaming the fire on Thatcherism and New Labour.

Although the inquiry into the causes of the fire has barely started, the Labour leader will say it was the result of a ‘failed and broken system which Labour must and will replace.’ 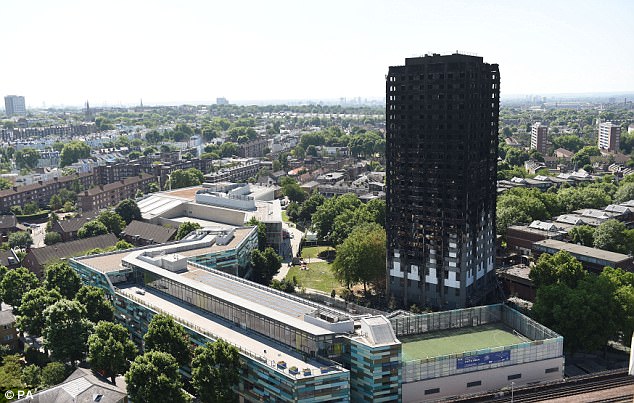 The Labour leader will also lay the blame for Grenfell Tower at the door of the Tories and New Labour, calling it a ‘tragic monument’ to modern society

‘The disregard for rampant inequality, the hollowing out of our public services, the disdain for the powerless and the poor have made our society more brutal and less caring,’ he will say.

‘Now that graded regime has a tragic monument – the chilling wreckage of Grenfell Tower, a horrifying fire in which dozens perished, an entirely avoidable human disaster.’

Labour sources said Mr Corbyn believed the fire in the tower, which was built in the 1970s, was the result of a ‘failed economic model that was introduced in the 1980s and has been with us ever since.’

Despite deep divisions within Labour on Brexit, Mr Corbyn will also round on the government’s handling of the issue.

‘The Tories are more interested in posturing for personal advantage than in getting the best deal for Britain,’ he will say.

‘Never has the national interest been so ill-served on such a vital issue. If there were no other reason for the Tories to go, their self-interested Brexit bungling would be reason enough.

‘So I have a simple message to the cabinet: for Britain’s sake pull yourself together or make way.’

The Shadow Chancellor’s colleagues clarified that only a ‘handful’ of the deals, most of which were signed under New Labour, would be taken over by the state. Signalling a further retreat, they announced the policy would undergo a case-by-case review, which could take years.

Mr McDonnell told the Labour conference on Monday: ‘We will bring existing PFI contracts back in-house.’ The comments seemed to indicate every contract was up for grabs.

PFI was used prolifically by Tony Blair’s government to fund new schools and hospitals without the Treasury having to pay costs upfront. But health think tanks said the NHS would have to spend about £30billion just to cancel deals to build and maintain hospitals.

The Confederation of British Industry said Labour’s plans would send investors ‘running for the hills’. Yesterday, Labour’s health spokesman Jonathan Ashworth said PFI contracts could not be taken back ‘overnight’ and denied that Mr McDonnell had ‘jumped the gun’.

Asked how many PFI contracts are a problem, he told BBC Radio 4’s Today programme: ‘NHS experts generally accept that it’s only a handful which are causing hospital trusts across the country a significant problem, but let’s look at every single one in detail.’