Jeremy Corbyn today claimed he had not appeared on Iran’s state television for a ‘long time’ despite records showing it was as recently as 2012.

The Labour leader has faced frequent criticism for his appearances on Press TV, for which he has declared about £20,000 in payments.

Mr Corbyn insisted on the Andrew Marr Show today that he stopped appearing on the station amid a crackdown on the ‘green movement’ of opposition protests.

The crackdown began in 2009 but Mr Corbyn’s last appearance was three years later, in 2012.

Labour sources told MailOnline the final appearance was to discuss what had happened in 2009 and make the case for better human rights in Iran.

But senior Conservative MP Michael Fabricant slammed Mr Corbyn’s record of appearing on the station and said he was wrong to claim it was a ‘long time ago’.

Mr Corbyn was challenged over his appearances by the BBC’s Andrew Marr today.

He said: ‘A very long time ago I did some programmes for Press TV.

‘I ceased to do any programmes when they treated the green movement (anti-government campaigners) the way that they did.

‘And I also at all of those occasions made my voice very clear about human rights abuses.’

‘There have to be human rights demands made on the Iranian government which I make’, he said. 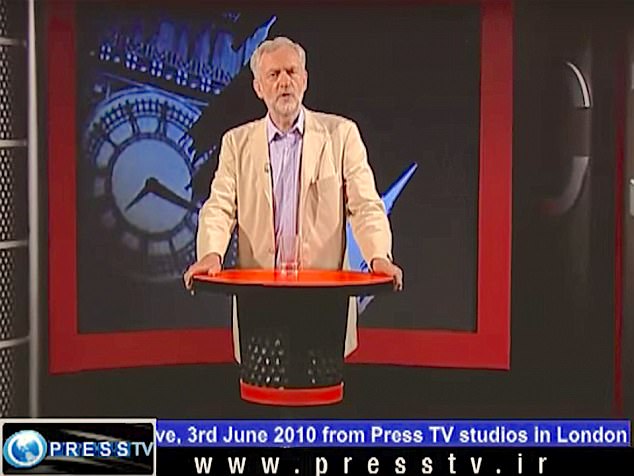 The Labour leader has faced frequent criticism for his appearances on Press TV, for which he has declared about £20,000 in payments

Mr Fabricant told MailOnline: ‘Is 5 years ago a ”long time”? I think not.

‘Beloved of the Iran regime and the Ayatollah, Corbyn supports Hezbollah and calls them his ‘friends’ despite their being a terror gang – with the backing of Iran to destabilise the Middle East and works against British interests in the region.

‘I’m surprised Corbyn doesn’t have a daily show in Tehran.’

A spokesman for Jeremy Corbyn said: ‘Jeremy’s involvement with Press TV ended when changes to the way they were operating meant he could not participate without political interference.

‘His involvement with Press TV allowed him to deplore all human rights abuses, which he has consistently raised with Iran, including on a visit of British MPs to Tehran.

‘Jeremy put the payments from Press TV towards his constituency office.’